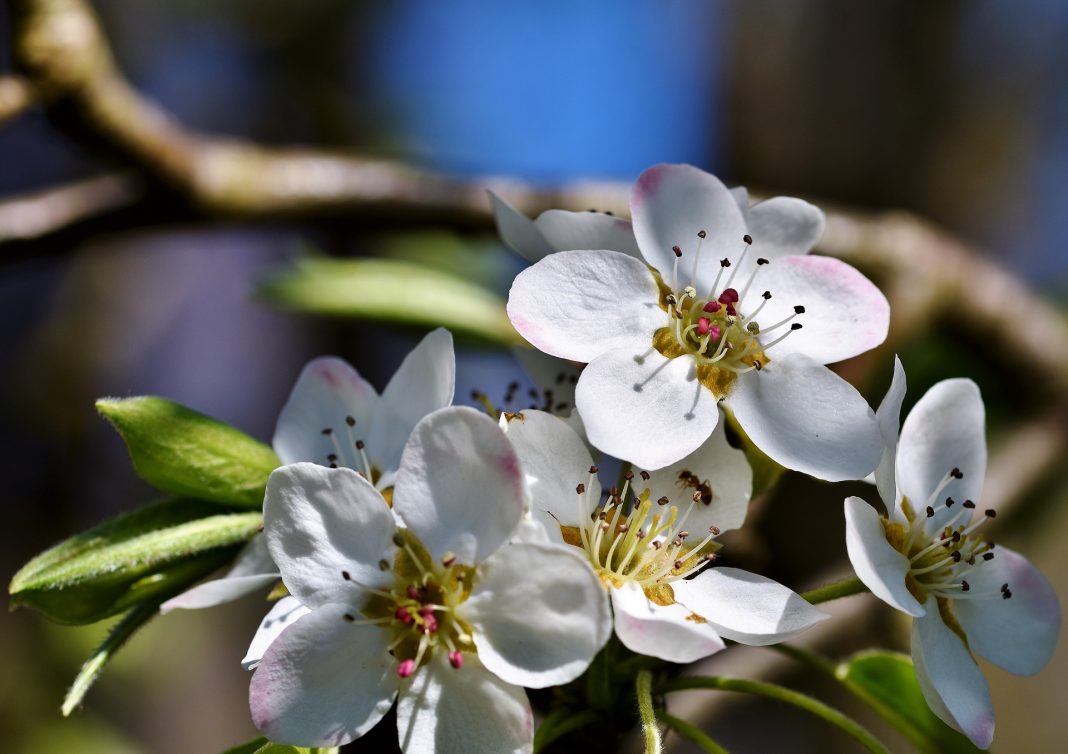 Everyone likes a good success story, and if I were called upon to name the most successful tree in our small orchard I’d have to say it’s the Orient pear closely followed by its hale and hearty relative, the Kieffer. Both of these varieties have stood the test of time, giving us plenty of fruit for pies, preserves, salads, etc. 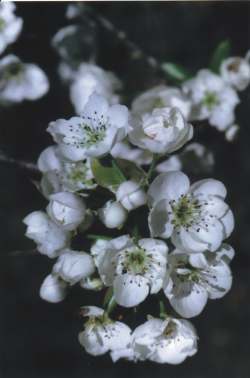 Pear trees in spring are a feast for the eyes and a boon to beekeepers. The trees usually bloom late enough to avoid frost damage.

Pears with smooth flesh such as Bartlett have great taste and texture appeal, but I gave up long ago trying to grow those. I finally became convinced that no matter how I tried to follow the advice of the experts, Bartletts with their poor resistance to fire blight are not for southwestern Arkansas (Zone 8), as well as a number of other areas. Bartletts seem to do best along the Pacific coast and in northern states east of the Mississippi River.

Folks who live where fire blight is not a problem should count their blessings as it definitely puts a damper on trying to grow a number of fruit trees and ornamentals. There is virtually no way for the average gardener to cope with it other than to seek out varieties that have high resistance to the blight. The first signs of trouble usually show up during wet spring seasons when fire blight makes its appearance in the form of blackened blossoms and tips of branches that look as though they have been scorched by fire. The affected parts turn black, bend into a wilted position, and rapidly die back.

There are so many agents helping to spread the blightbees and other insects, wind-blown rain, etcthat there is no feasible way of preventing contagion. Some authorities recommend spraying for blossom control and pruning to save the unaffected branches. If the spring is a relatively dry one, spraying is helpful. In our area, spring is accompanied with plenty of rain either in the form of showers or storms, and spraying is a wasted effort. This year, for good measure, we’re reaping some of El Nino’s erratic behavior. As for pruning, my experience with blight-prone trees has been that I prune back more of the branches than grow in a season. Progress in reverse!

Fire blight is a capricious disease. There are times when it will only affect the blossoms of a tree, as in the case of a Maxine pear in our orchard. The Maxine (very much like a Bartlett pear and advertised to be blight resistant) apparently has a certain amount of resistance as it seemed to be doing well for a few years, although its crops of pears were scant. Now the blossoms turn black as soon as they start to drop their petals, giving the tree the appearance of having been dabbed with black paint. No other part of the tree is affected, but there’s no hope of fruit without blossoms. So, when time permits, I’m considering making pearwood picture frames. 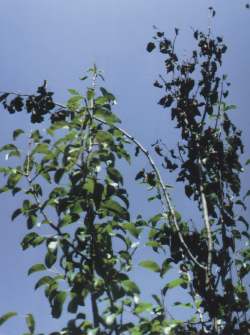 Fire blight can be devastating to many trees and shrubs. Here the blight has blackened a major portion of a young Seckel pear tree necessitating removal of a large part of its growth.

Some years ago I read about a pear called the Orient in a southern grower’s catalog. The part of the description that stood out to me was “highly resistant to fire blight.” I embarked on another pear trial and have never regretted it, as the Orient grew with vigor, produced a few pears its third year, and has been going strong ever since with no fire blight.

Orient pears are not as fine grained as the Bartletts, but many of the Orient fruits will weigh a pound a piece. They begin ripening here about mid-July and finish up 4-5 weeks later. This is an advantage as we don’t suddenly find ourselves faced with a tree full of ripe fruit to process all at once. The fruit is excellent when canned in light syrup for dessert or salad use, but is a little too juicy for preserves or pear honey.

Most pears are ready to pick when they may be snapped off by lifting them up and having them break away easily from the limbs. The best way to enjoy fresh pears is to harvest them when they will break away, as mentioned, putting them in a cool place inside the house for a few days. When they reach a less firm, more aromatic stage, they are ready to be eaten. The Orients are best for canning, however, while they are firm and first picked from the tree.

Sometimes life plays tricks on gardeners. Happy with the success of our first Orient tree, I ordered another one. Apparently the new tree was mislabeled as it turned out to be a Kieffer. (It’s hard to tell the difference between standard pear trees until they reach fruit-bearing age.) The only thing that kept me from ousting the Kieffer was that I didn’t have time to remove it when I discovered the mistake. 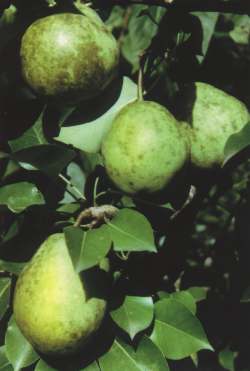 The old hard-as-a-rock Kieffer pear may not be as large as some varieties of pears, but it has stood the test of time. No fire blight here.

The undesired Kieffer, apparently aware that it was living in jeopardy, made great haste to begin bearing heavy crops of pears that were excellent for making pear preserves and pear honey (see recipe). Having redeemed itself, the Kieffer is still in the orchard. Kieffers are drier pears than the Orients, so each makes up for the other’s shortcomings. Kieffers are also highly resistant to fire blight. Notice the survival of abandoned pear orchards around the countryside where old home places have been. The hard-as-a-rock Kieffers may not be as highly regarded by pear lovers as the Bartletts, but they’re survivors and they produce where others will not. I have never seen a Kieffer tree with fire blight.

As a general rule, pear trees should be planted in poor soil, as very fertile soil increases the likelihood of fire blight attack. Coupled with plenty of rain, causing rapid growth, rich soil works hand in hand with the blight.

Pear trees don’t usually require a great deal of pruning. Weak limbs having a tendency to droop toward the ground should be removed along with any dead wood that occurs. As with any fruit tree, branches that rub together should be thinned to prevent scars and rotten limbs. When trees are heavily laden with fruit, limbs should be propped up with some type of support that will not harm the bark.

Pear trees are like roses in that they do not like wet feet. They should be planted in a well drained, open spot with no big trees nearby. Soil should have moisture-retaining qualities, but not boggy or subject to creek or river overflows. Pear trees need room to develop their potential and should be planted about 25 feet apart. Orients and Kieffers are long term investments as they will begin bearing in 3-5 years and will be around 25-75 years if properly attended. 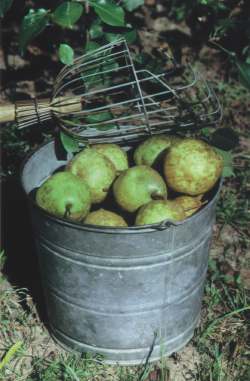 There is very little damage, if any, to fruit when picked with this type of picker. A long handle (ours is bamboo), gives easy access to out-of-reach fruit such as the Orient pears shown here.

If possible, a tree should be planted when first received from the nursery. (Most nurseries include specific instructions regarding planting). I have often received dormant trees when weather did not permit immediate planting and I have found the best thing to do is to place the shipment in a cool room where it can remain for a few days and not dry out.

When ready to place a tree in a selected site, one should always study the root system by gently spreading the roots out from their cramped shipping container. Cleanly cut off any damaged roots. If tree is in bad shape, immediately notify the shipper, as most nurseries will replace damaged stock if informed soon after shipment is received.

The hole should be dug about six inches wider than the root span so that feeder roots may have a good chance to develop and spread out. Depth of hole may be judged by the soil line on the tree. Place tree in hole and fill about halfway up with pulverized soil (no clods). Amply water the soil down so that it settles, leaving no air pockets. Finish filling the hole with soil and water again.

Some of us live in drought prone areas and, as a precaution, I always make a small levee about three feet in diameter around a new tree. This levee will help to direct water to the roots when needed. An organic mulch of leaves, straw, etc, also helps to retain moisture. Even with mature trees, it is well to give the ground underneath the trees an occasional slow, thorough soaking during dry conditions, particularly if the trees are laden with fruit.

To avoid trunk borer trouble, I generously sprinkle wood ashes around the base of our fruit trees during winter. A cupful is plenty for a young tree. 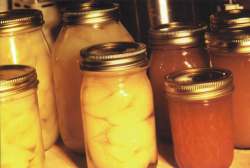 Orient pears on the left have been canned in quarters for use in salads or desserts. Pear honey on the right is a delicious spread made from Kieffer pears.

Although most pear trees are self-pollinating, it is advisable to plant more than one variety to increase production, particularly if there are no other pear trees within a quarter mile of your orchard. There are fringe benefits to Orients and Kieffers, as they are outstanding additions to the spring landscape when in bloom and a boon to beekeepers. Moreover they always seem to bloom late enough to escape frost damage. Late autumn brings forth a different colorful display when the leaves turn from green to golden bronze.

I urge anyone who has given up in disgust on trying to raise good pears to give the Orients and Kieffers a chance. They’ll hang in there!

Some sources for trees

Pare and core hard-ripe Kieffer pears. Cut in chunks small enough to easily feed through food grinder fitted with coarse blade. To each quart of ground pears add the following:

Boil mixture in stainless steel, porcelain, or graniteware pot stirring frequently until thickened (Do not use aluminum). When desired thickness is achieved, immediately put in hot, sterilized jars and seal. Remember that this is a spread and should not be overcooked to a jelly stage.

A tasty variation is to substitute orange and nutmeg for lemon and ginger.