If you are looking for a way to earn extra income, a retirement job, or even a new livelihood, then raising earthworms might just be the thing. This is one occupation that will certainly keep you close to the soilsometimes up to your elbows in it. 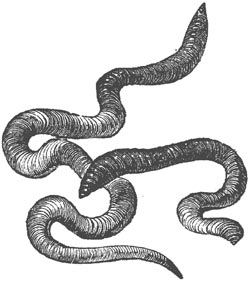 The primary market for your squirming livestock is the ever growing recreational fishing market. Most people who are heading out for an afternoon of fishing simply don’t have the time or place to dig up a can full of lively fishing worms. You can fill their need for live bait by having good, healthy bait worms available.

To help prepare this article, I spoke with a veteran worm wrangler from down in Slocomb, Alabama. That’s where Tom Bowe and his partner Lorraine Brashear live and raise redworms on their nine-acre homestead.

When they began, they started with little more than a handful of starter stock, purchased from a worm vendor in neighboring Georgia. They fed and raised them for a year before making the first sale. However, that amounted to nearly $1400!

Tom and Lorraine don’t normally sell the worms on a retail basis. They do, however, ship thousands of worms to places as far away as Washington state. They sell much of their stock to worm “bait runners.” These are the guys who buy cupped bait wholesale, then head out on a wide route to resell it to vendors all over their area. Selling to the runners is also good for Tom and Lorraine. When packaging worms for the runners, Tom cups them up in small containers that look sort of like extra short cottage cheese containers. The small blue cups are available from a food supply company and are the same type of cup that convenience store delis use to put potato salad or coleslaw in. In some areas, Styrofoam cups are used for the same purpose.

I asked Tom why he raised redworms instead of other types of worms. He said he has tried others but has found the redworms to be hardy, tolerating both the heat of Alabama summers and the 10 to 15 degree cold snaps that they often get in winter. Redworms also don’t have to be refrigerated like many other types of worms. They can also take a lot of moisture. They can tolerate overwatering better than most other types of worms. Redworms are very prolific and they grow very well and very fast. Tom said redworms can double in volume every two to three months. They are the easiest livestock to raise.

Tom usually keeps the main breeding population in pits dug into the clay soil with a roof overhead. The pits are about a foot and a half deep and 6-8 feet wide, and are filled with peat moss and rich feed. The soil itself is heavy clay, so the wigglers aren’t too eager to go burrowing out of the loose diggings of their happy home. Once they are coming along, he moves them into the rows of blue plastic barrel halves to “finish,” that is, to fatten and finish growing. From there, they are cupped and sold or packaged and shipped.

You can also raise your worms in other containers. Old chest freezers or bathtubs make excellent worm beds and are at a convenient working height. Concrete blocks can be used to frame up a worm bed, and I’ve seen illustrations of rows of large plastic storage tubs lining shelves inside a garage or outbuilding. Each tub contained its own population of worms. With any worm container, be sure to provide a few drain holes, covered with some fine screen or mesh to allow excess water to drain. The mesh will keep any errant wigglers from escaping. Tom uses only peat moss for bedding. It is light, loose, and fairly inexpensive when purchased in quantity at some of the big home supply stores.

In addition to the worms, another market exists for the worm “castings.” That’s what they call worm poo, a highly sought after by-product that can be sold as fertilizer for $1 a pound or more. Worm castings are very rich in nitrogen, phosphate, calcium, magnesium, potash, and other nutrients.

Once your worms have been in place for some three or four months, they should have created a usable supply of castings. To harvest, just dump the contents of the bin onto a flat surface. Hang a bright light over the pile and the worms will head to the bottom of the heap. Begin picking through the old bedding, which should be full of castings. Work slowly and check to be sure that the worms are heading downward and are not being removed with the old bedding and castings. Look also for the small yellowish-colored egg capsules. Each one of those contains up to 20 or so baby worms. Be sure to put those back in with the worms. You may also use this opportunity to divide some of the worms into new bins or remove them for cupping. End up by adding some fresh bedding to the original bin to replace what was removed.

Use the castings/compost as you would any other ultra-rich soil amendment in moderation. It is rich stuff and will really give your plants a boost.

An enterprising worm rancher can easily add worm castings to their product list. Tom told me that he has considered getting more into that part of the business, but currently applies the castings from their operation to parts of their own homestead.

Feeding your redworms doesn’t have to be really scientific. Provide them with a diet of simple vegetable materials. While they aren’t particularly finicky in their dining habits, they do have a few likes and dislikes. Kitchen scraps are great. Here are a few other feeding tips to keep in mind.

If you have a friendly relationship with a local grocery store, you might be able to come up with outdated produce to feed to your worms.

Over the years, Tom and Lorraine have found that their customers order for various reasons. They want to:

Tom and Lorraine currently raise their redworms in a sizeable 20′ x 70′ worm barn. They have millions of worms in their pits and barrels and will get orders for up to 2000 cups per week during the busy season.

It’s not all been a bed of roses…or redworms, as the case may be. Tom has accidentally killed plenty of worms over the past 10 years. He said that the best ways to kill worms is to add too much fresh, hot manure to the worm bed, or to let the worms get too dry. Although you can drown worms, they can take too much moisture a lot more readily than they can stand being too dry.

Another of the attractive aspects of the mail-order part of the business is that redworms are easy to ship. To ship live worms, Tom and Lorraine begin by picking up some used woven plastic feed sacks. They can be had cheaply or even free if they’ve got a hole in them. Lorraine cuts them down and sews them into smaller bags that will accommodate about 3 pounds of damp peat moss and 2 pounds of lively redworms. The bagged wigglers are put into a USPS Priority Mail box and shipped to the customer. Tom insures each package. He believes that is the only way to do business and it ensures satisfied customers.

I asked about pricing, and Tom told me that they currently charge $42 dollars for two pounds of redworms. That equals about five thousand wigglers. They offer pricing discounts on larger quantities. All of their prices include priority shipping by USPS.

Tom mentioned that he is not out to make every dollar in the redworm business. He enjoys working with the worms, dealing with people, and working at his own pace. Tom and Lorraine have helped many people get started in the business. They love the fact that they get to work at home. Tom also said that the worms are quiet, and that makes for a peaceful place. The worm operation gives them the freedom to do other things.

Now that you are pumped up to get into the business, Tom and Lorraine can help you do that as well! Their website, www.redwormcountry.com, contains a wealth of information useful to anyone interested in getting into the worm raising business. They may also be reached at 334-886-3547 or by e-mailing them at mcmgroup@trip.net.

As an alternative to doing the actual raising of the worms, you might consider becoming one of the “runners” Tom referred to. I contacted a bait dealer in my area of southwestern Indiana who does just that. He supplies bait of different types to vendors.

Kenny Renner has been in the business for more than 18 years. He owns and operates Renner’s Wholesale Bait and serves more than 70 businesses in about a 100-mile radius of his home in southwestern Indiana. During the busy season, he easily logs more than 225 miles per day.

He deals with a variety of live baits including crickets, redworms, beemoths, mealworms, Canadian nightcrawlers, minnows, and goldfish. His customers include bait shops, convenience stores, and anyone else needing fresh, lively bait to sell to their customers. He buys his worms and night crawlers in bulk and packages them himself in consumer-ready containers. Kenny uses the shallow Styrofoam or plastic deli containers described above. They easily hold a dozen nightcrawlers and cost from 5 to 6 cents per cup and lid.

With the volume that he sells, Kenny buys most of his worms live from “worm ranches” like Tom and Lorraine’s. He adds about 20% to his cost when he sells to the retailer. He has dealt with the same suppliers for many years but gets different baits from different suppliers.

The biggest problem in the business is keeping bait alive and delivering lively stock to the retail customers. An air-conditioned box helps keeps worms alive during delivery. The retailer is required to supply the needed equipment to store and display the bait for sale. That may include aerated tanks, refrigerators, cricket cages, etc.

Currently, prices for a couple of his baits run something like this:

Supplies are available from: