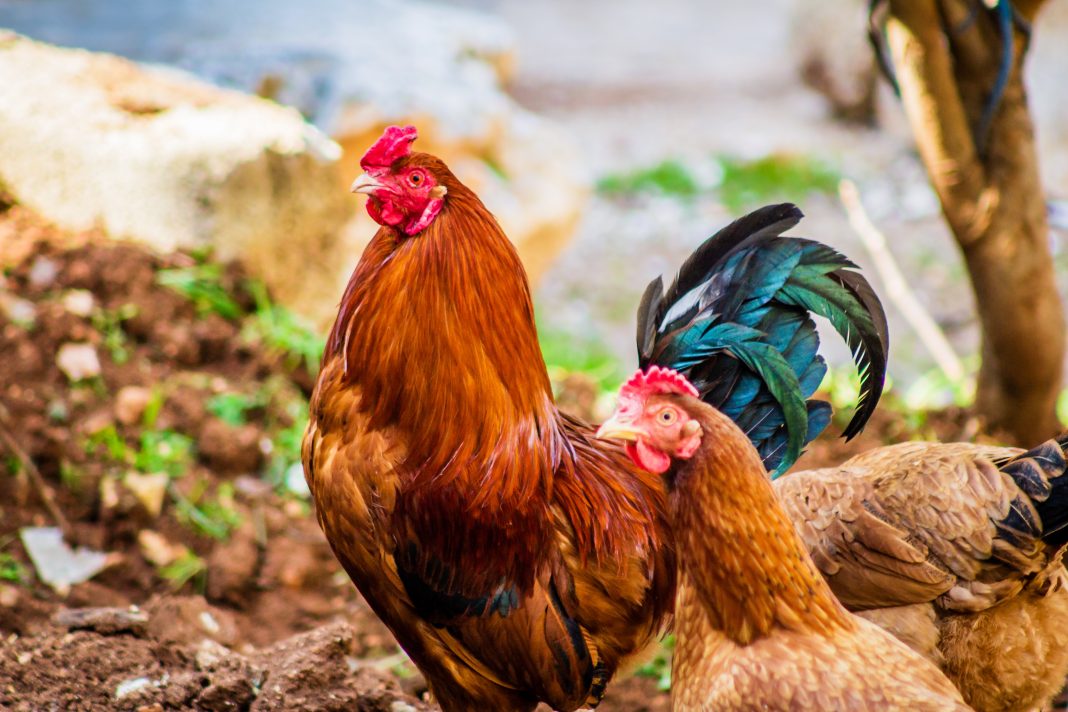 The recent droughts in the midwest have meant hard times for many livestock owners. Areas without irrigation saw parched earth without a scrap of green anywhere. Corn withered and died in the field. Hay that was supposed to be stored for the winter had already been fed and what was left was priced sky-high. Many homesteaders had to sell animals for lack of a way to feed them.

I was determined to keep all the animals necessary for my little homestead, so I began to search for a way to provide for them on my tiny plot of land. While looking for types of fodder that could be grown in a small area, yet still provide a lot of feed, I stumbled upon the concept of hydroponic grain fodder. Simply put, hydroponic grain fodder allows you to store green grass in the form of whole grain year-round, regardless of weather conditions. This method of feeding became quite popular in Australia after several severe droughts.

One thing my search did not turn up was a small, inexpensive system that would work for me. The climate-controlled systems were well over $10,000 and even the smallest one I could find was more than $3,500 and was far too big for my needs. So I set about building my own system. I had a few parameters that needed to be met:

1. The system had to be able to sit on the carpet in my tiny living room without ruining it. Sprouting grain requires stable temperatures between 65° and 80° F, which just happens to be comfortable for me too. Since I’m already heating and cooling my living area, it seemed very economical to incorporate my fodder into that space.

2. The system had to be easy to use and not too time-consuming. While I love all my critters and will spend a reasonable amount of time caring for them, I do have a life.

3. The system had to be easy to assemble, disassemble, and store.

4. The system had to be economical.

Armed with a little common sense, a lot of research, and a good imagination, I began to design my system. Since grain sprouts reach peak nutrient value in six days and begin to decline thereafter, I designed a six-tray system which would give me one tray of fodder each day. I chose to use PVC as the frame since it is inexpensive, lightweight, and easy to acquire and cut. Heavy-duty greenhouse trays became economical containers for the fodder, and an appropriately-sized Sterilite tote became the water sump. The pump was a little harder to find, but I finally settled on a reasonably-priced pump designed for aquaponics that could lift the water the required distance.

My first prototype was quickly redesigned with level shelves after I discovered that tipping the shelves so the water would flow from the front of the trays caused too much splashing. The redesign cut down on the splashing, but required an adjustment to the drainage holes in the trays. I also reduced the distance between shelves and changed the configuration of the holes on the water supply line. Finally, I had a system that worked to my satisfaction.

I chose whole oats for my first sprouting experiment. Barley is the industry standard, but it’s hard to come by in Missouri and I had the oats on hand. Let’s just say my results weren’t ideal. I soaked the oats overnight (I’ve since learned that is too long) and poured the drained grain into the tray and set the timer to water the trays for 30 minutes every two hours. After four days I had very slimy water and hardly any sprouts. I let it go the entire six-day cycle, filling each tray, and then poured the whole smelly mess under the oak tree on the sixth day. I now have a lovely stand of oat grass under that tree. 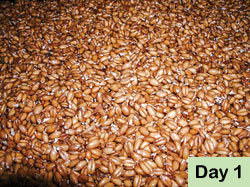 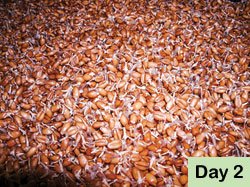 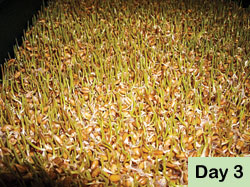 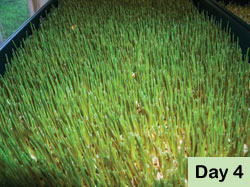 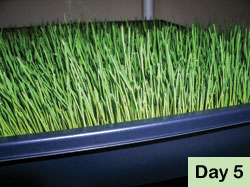 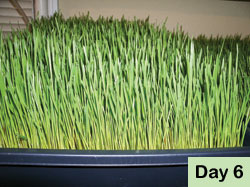 I then picked up a bag of whole wheat from the feed store. The first morning I soaked it for 30 minutes, drained it, and put it in an old ice cream bucket on top of the refrigerator. I rinsed and drained it before I went to bed that night and once again put it on the top of the refrigerator. The next morning I was rewarded with thousands of plump little grains sporting tiny white sprouts. Into the tray they went, the bucket got a quick spray of diluted bleach, a rinse, and the next day’s batch of grain began its 30-minute soak.

After six days of this routine, I had a beautiful 12-pound mat of wheat grass. My four hens quickly lost all dignity in the rush to gobble it up, roots and all. Twelve pounds of fodder is far too much for my tiny flock and since I have not finished the accommodations for my meat rabbits and Kinder goats yet, most of the mat is fed to an old rescue horse that belongs to a friend of mine. It was quite amazing to see the difference in his coat and condition from just a few weeks of feeding him the fodder.

I’ve found I need to change the water in the tote every three days or so and I adjusted the timer to run for 15 minutes every two hours so the grain doesn’t start to sour. I spend less than 10 minutes on my fodder-sprouting activities, and as a bonus, I have a lovely green water feature in my living room. I purchase wheat from my local feed store at $10.60 for a 50-pound bag. Each tray takes about two pounds of grain and provides me with 12 to 15 pounds of finished fodder. This gives me 25 days of feed from one bag of wheat and my fodder costs less than 43¢ a tray. If I were feeding dry grain to all my animals, I would need two bags of sweet feed for the goats at $14.75 a bag, ¼ bag of sweet feed for my rabbits, and ¼ bag of layer pellets for my hens at $15.35 per bag. This gives me a savings of $26.41 in a 25-day period or about $317 in a year.

How to feed fodder

• The suggested feeding rate for fodder is 1% to 3% of bodyweight depending on the condition of the animal. In a real-world situation, this would mean a 1,000-pound horse that is not working should get 10 pounds of fodder per day along with poor pasture or hay. Smaller animals eat much less, of course. A 75-pound heavily-milking Kinder doe needs just under 2½ pounds of fodder per day while ¼ pound each is plenty for chickens and rabbits.

• Sprouted fodder is 80% digestible as compared to about 30% digestibility for dry grain.

• Sprouting the grain increases protein, vitamin A, and enzyme content.

• Ruminants such as cattle, goats, sheep, and llamas need more roughage than fodder can give them. Some sort of hay or pasture must be available; however, it can be very poor quality when coupled with fodder. While not actually ruminants, horses and rabbits should also be offered some hay.

• While the chickens didn’t hesitate to gobble the fodder, other animals such as goats, cows, and horses may take a little time to eat the fodder. It has a different taste and “mouth-feel” than their regular feed and they need to get used to it. A drizzle of molasses for the first few days will usually get them to eat it eagerly.

I look forward to shiny feathers and golden egg yolks from my chickens all winter long and healthy and productive goats and rabbits this spring. I also feel a real sense of satisfaction in knowing that the 15 bags of wheat stored in my crawlspace is enough for an entire year of fodder.

In uncertain times, livestock can provide meat, milk, eggs, and work power for the homesteader. They are self-repairing and self-replicating, but they must be fed. Adding sprouted fodder to your feeding regimen can help control feed costs, provide great nutrition year round, and allow you to store a lot in a small space.

The author now sells ready-made versions of these fodder systems, along with plans for the do-it-yourselfers. For more information, go to http://www.half-pinthomestead.com.