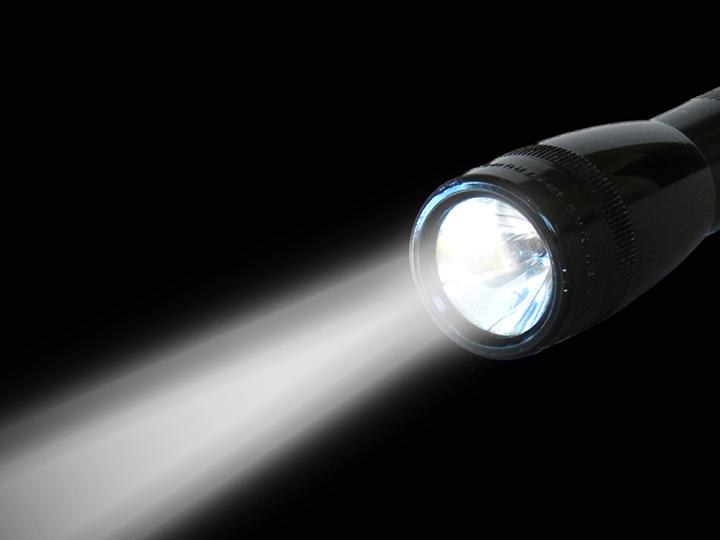 Enhancing vision and hearing can make you a safer, more effective shooter, and sometimes can save human lives.

Scotopic visionthe way we see in the darkis a scary thing. The eye doctors say that on a cloudy night, a person with 20/20 vision can distinguish so little that he’s the equivalent of legally blind. If you’ve had to deploy your firearm in the dark, you’ve become the law school exemplar of recklessness, “a blind man with a gun.”

If you live in a backwoods home, you are surrounded by nocturnal creatures. You are not one of them, at least not by nature. If you anticipate ever deploying a firearm in poor lighting conditions, you want to make sure that you’ve provided for an artificial light source. This normally takes the form of some sort of flashlight.

New York City cops were the first to pick up on the fact that even in broad daylight, you can suddenly find yourself in a pitch-dark windowless basement. For generations, NYPD has required that even day-shift uniformed officers must carry a flashlight at all times. It’s a sound policy, one I follow myself when working for the police department. Any hunter, angler, or hiker who has ever been lost in the woods overnight has learned the wisdom of including a flashlight in their “survival kit.”

I’ve seen cases where a person was shot by mistake by an officer or armed citizen because the individual mimicked a dangerous movement with an object in their hand that the shooter assumed to be a weapon. The object would turn out to be a wallet, keys, a spoon in one case, and a CD in another. With a powerful flashlight, the shooter would have quite possibly been able to identify the object in question before firing the tragic bullets.

I know one officer who, entering a darkened apartment where foul play was feared, saw a figure rise from behind a sofa in the shadows, holding a revolver. He fired, killing a four-year-old boy who was holding a toy gun. Though he had a flashlight, he had just returned from a training session where he was told not to use it in a danger situation for fear of giving his position away. He is convinced that if he had employed the flashlight, he would have seen what he was dealing with and not fired the fatal shot.

Learn how to employ a light with a firearm. A good universal technique with a handgun was developed by the late Mike Harries. The weapon is held one-handed. The support hand holds the flashlight with the lamp protruding from the bottom of the fist, and the backs of the hands are pressed together. This aligns the flashlight beam with the gun barrel. The thumb works a butt-mounted flashlight button, while the middle finger does that operation if the button is on the barrel of the flashlight. Be sure to practice it safely. Dry-fire before you try it with live ammo. It is critical that the flashlight hand come under the gun butt. The slide of the pistol can lacerate the hand and cause a gun jam if the hand has come over the gun-hand wrist instead of beneath it.

A number of companies make flashlight attachments that mount directly to the gun. Heckler and Koch has a good one for their excellent USP pistol series. Wilson Technologies, Insights Technologies, and SureFire all make good units. I personally use the latter.

These make particular sense with a rifle or shotgun, since long guns are particularly difficult to coordinate with separate flashlights. If nocturnal predators are ravaging your vegetable garden or stalking your chicken coop, this may be the best system. It’s not unethical, like jacklighting deer, so long as you’ve checked the fish and game laws and confirmed that you’re allowed to shoot pest animals on your own property, and at night. These attachments are made for a wide array of guns. I have one on my department-issue HK MP5 submachinegun, and believe me, the SureFire unit makes a world of difference in a hinky situation in the dark. I was on one drug raid where a suspect appeared in the window of the target house as we approached. An officer brought up his Benelli autoloading shotgun with SureFire light attached, and beamed the man in the eyes. He spun away from the bright beam. A potentially lethal situation had been resolved without bloodshed.

Beware of doing a building search with the light mounted on the gun. It requires great coolness and discipline. When you see something that surprises you, the startle response can cause your finger to convulse on the trigger; the gun is pointed along with the flashlight at whatever it was you saw; and whatever is in the beam of the light dies. Make sure the finger is out of the trigger guard and the gun is “on safe” or un-cocked.

Active hearing protectors are a Godsend for building searches, waiting for the fox to come to the henhouse, etc. The best I’ve found is the Gentex 1030A, aka “Wolf Ears.” They let you determine the direction a sound came from, and have magnificent low-end amplification, yet they reduce loud sounds like gunfire. In Africa, I was able to hear where the animals were and point in their direction before my trackers and guides, including the fabulous bushmen of Namibia, were able to hear them. That’s because I was wearing Wolf Ears. Yet the brutal roar of my .375 Magnum and .458 Magnum rifles never bothered me. Best of all worlds.

Sight and sound are our two most critical sensory inputs when things get serious enough that we need to have a gun in hand. This is why I almost always wear a flashlight, even on my own time. It’s why I have a SureFire attached to the Beretta 9mm I keep near my bedside, and on that MP5. This is also why I have a pair of Wolf Ears by the bed and in the patrol car.