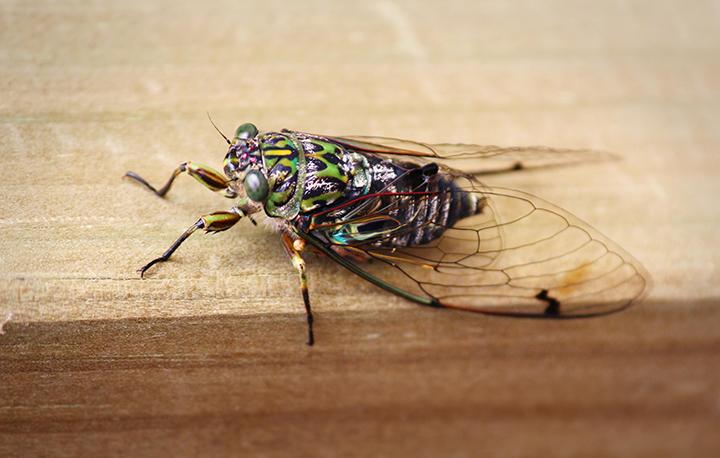 Over the past couple of decades Generation X has seen plenty of mention among the different branches of the regular mass media. This year however the really big story (at least for fisherfolk east of the Mississippi) is Brood X, which seems to be garnering very little, if any, mention at all, outside of a few rather arcane and scholarly scientific publications.

In fact, I just only first learned anything at all about this unique upcoming phenomena a few short days ago. Needing to make a trip down to Ft. Wayne anyhow, I decided to use the opportunity to drop by and see if one of my long time friends might happen to be at home while I was in town.

Well, I found “The Professor” (which has been my buddy’s nickname ever sense he actually became a professor of entomology), sitting at his kitchen table, where he was tying BIG 1-1/2″ to 2″ long, black, orange, and red fishing flies, in imitation of the 17-year cicada.

Now according to The Professor, who just by the way really is a leading expert in this insect area, the truly huge numbers of these insects that would periodically seem to Swarm in from nowhere, very greatly alarmed America’s early colonists who were deathly afraid these “locusts” could be some type of Biblical style plague. Coming not only to destroy their desperately needed crops, but the huge multitude of these insects seemed capable of decimating the entire eastern forests as well.

Even though the loud and frantic mating calls of these supersized insects do in fact sound as if they might be coming straight out of some futuristic type horror movie, the native Indians dwelling in the same regions knew that rather than heralding some sort of apocalyptic event, each of these rare “hatches” meant they would be seeing a summer’s worth of the finest fishing in over a decade and a half.

Before getting down to his real point, my educator friend seemed to feel some obligation to give me an abridged course on these insects (which by the way, look like the world’s largest housefly to me). First off, it seems as if these large and loud insects spend either 13 or 17 years (depending on species) in a “pupa” stage, dwelling totally underground, where they feed rather voraciously on the fine roots of grasses, trees, and other plants, before finally digging their way to the surface and climbing the nearest tree where each one sheds its skin and waits for it’s brand new wings to dry out, before getting on with it’s only real purpose in adulthood–mating.

Once the insects’ wings have dried (which normally takes a few hours) these giant bugs will spend the next few weeks busily rasping out their mating calls and breeding. And once the females deposit their eggs (which will eventually hatch into pupa and climb down to bury themselves in the soil) on small tree branches, both the males and the females will just sort of sit around on tree limbs singing, until they die and fall to the ground. In fact, if you can manage to get to them before rodents, snakes, and other creatures devour everything, it’s not at all uncommon to locate several hundred dead cicadas laying around the base of a single large tree.

Recalling the last large locust “hatch,” and realizing how every one of the rivers, lakes, and even most of the ponds I fish have plenty of trees growing along their banks, I could very easily see how all of those dead and dying cicadas falling off into the water could quickly trigger a real feeding bonanza among the bass, panfish, trout, and even catfish hunting in the shallows.

Yet, it was only after his mini-lecture that my friend finally got around to informing me how it’s during this Summer of 2004, when entomologists are expecting the “emergence” of Brood X, which he claims will be the largest emergence of “Seventeen Year Periodical Cicada” to occur in my lifetime.

Depending on local weather patterns and a few other variables, this event will occur at differing times, from early spring through mid-summer, throughout just about all of the United States east of the Mississippi, with the largest “emergences” occurring in all of New Jersey, Maryland, Kentucky, Tennessee, and Indiana and in portions of Iowa, Missouri, Georgia, Illinois, Ohio, Alabama, Mississippi, Virginia, North Carolina, West Virginia, Pennsylvania, and New York.

Once these huge insects begin flying, breeding, and sounding off, it normally takes at least two weeks before the first of them begin dying off. So fish are normally just a bit slow to start hitting on this somewhat unfamiliar food source. By the middle of the third week, though, millions, (possibly even billions), of these locusts will be dying off and falling down to the ground or into the water, which is when just about all of the larger fish will find their way into the shallows and take to gorging themselves at a truly unique rate.

Ponds, rivers, and smaller lakes are simply overcome by events of this nature. With the waters under overhanging tree limbs normally becoming overcrowded with just about every size and species of fish greedily competing for the dropping of red-eyed, black and orange insects. In the larger lakes and reservoirs, the smaller fish will normally stay out in deeper water, with the bigger fish crowding in close to forested or tree-lined banks.

Locating the best fishing areas at this time will be a relatively simple matter. You’ll need only to find a spot with plenty of limbs hanging out over the water, preferably with a breeze blowing away from the shore, as well as searching out the loudest spots along the shoreline.

Though I was still in my early thirties at the time, I clearly remember fishing during the last big 17-year hatch. At that time I’d simply gather up a large quantity of already dead locusts from where they’d fallen around the tree trunks and, after threading a locust on to a relatively large #1-size hook attached to a tapered leader, I’d flip-cast the bug into a shaded area right up near the bank. If I didn’t get a strike within the first few seconds, I’d give my rod a little twitch causing the bug to move only a couple of inches. This nearly always triggered an actual attack by a frenziedly feeding fish.

This year, in addition to using these same tactics, I intend trying a few artificials as well. In fact, I’ve already ordered a few “Arbogast Hucus Locusts” in their black and copper pattern (available from www.lurenet.com if you can’t find them locally), as well as several of Bass Pro Shop’s “Lazer Eye Locust” lures (from www.bassproshops.com), Rebel’s “Crickhopper Poppers” (also available from www.lurenet.com), plus ordering a few cicada flies from T. Hargrove in St. Louis (call 1-314-968-4223 if you’d like to try these as well).

To help you take advantage of this “once in a lifetime” fishing opportunity, the Conservation Departments in nearly every state in the Brood X emergence area will soon be publishing literature on the matter. And a simple telephone call to the State Conservation office with a request to speak with their entomologist should find you with plenty of help in working out a prime fishing timeline for any state in which you might be interested in fishing.

Even during the short periods, when the greenish annual cicadas are dying off, bass and other fish will normally strike the bugs with seemingly insane ferocity. So if it’s at all possible, you really don’t want to miss taking advantage of this ultra-rare angling opportunity.

Aside from using this chance to fill my smokehouse with fish, I plan on using this event to help build some lifetime-lasting memories for my kids and grandkids while I’m at it. There’s no reason you shouldn’t do the same.