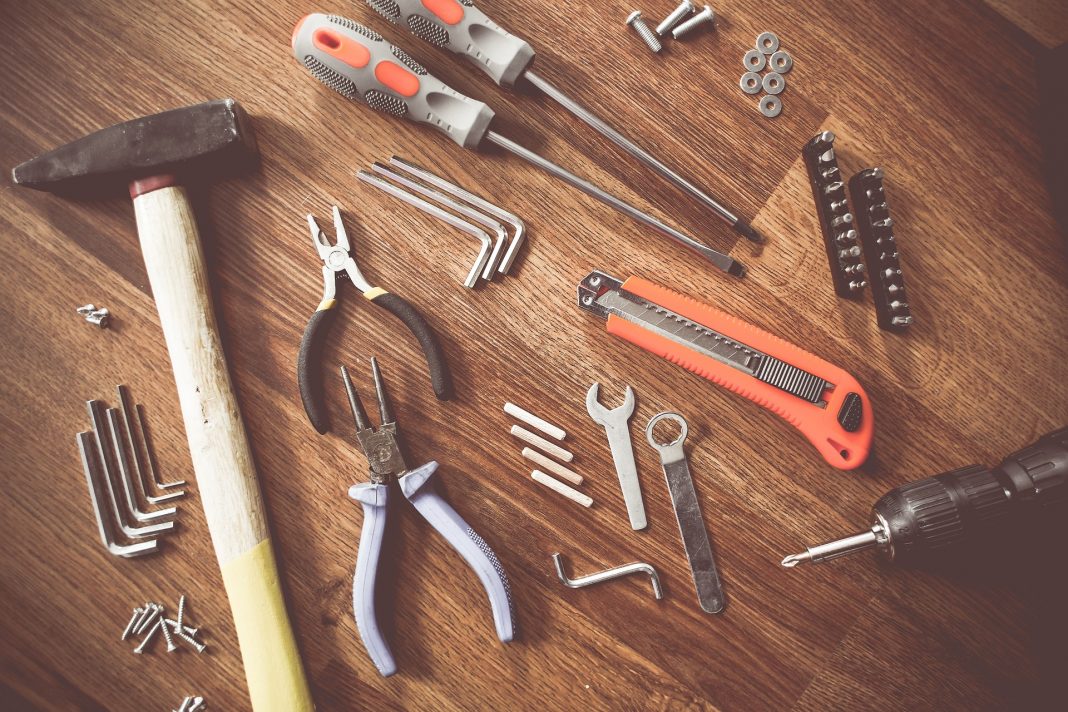 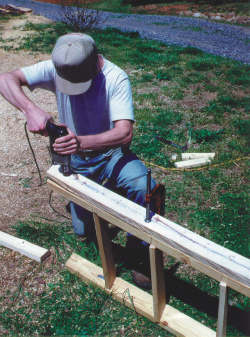 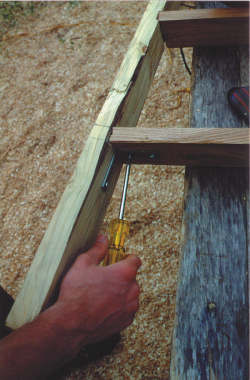 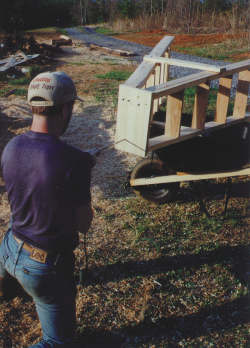 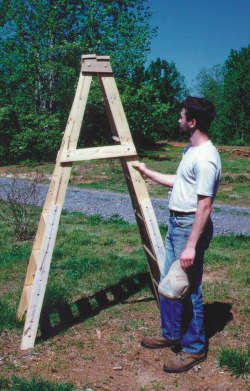 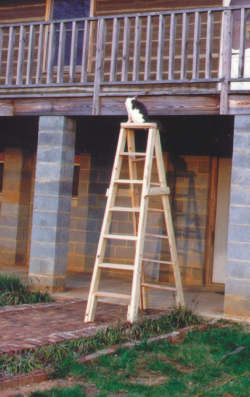 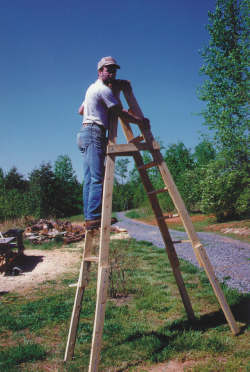 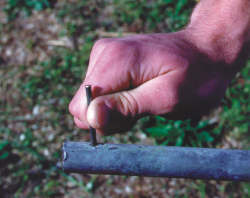 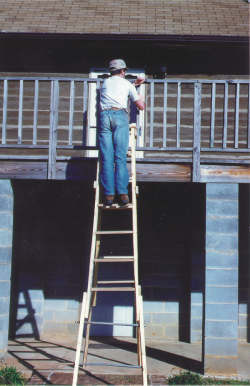 The story never varies. If I am doing outside work and need a ladder, I spend nearly as much time trying to set up the ladders as I do in completing the actual work. I find that I need more room, more height, more hands, and more patience for me to handle chores of modest difficulty because of the ladders and their problems.

Ladders, used outdoors, are always on uneven terrain, it seems, and there is considerable danger of falling, dropping and damaging materials, or enduring unreasonable difficulties. So we set out to correct the situation and in the process construct an all-purpose ladder that would meet all of our needs.

Here’s what we managed to accomplish: my son Robert III and I built our all-purpose ladder, which is in reality several ladders that solved our problems immediately. First, we have the regular step ladder that everybody knows and hates. But ours is different in that the step ladder is built so that someone can work on both sides of the ladder.

This dual nature of the ladder permits one of us to climb the back side and hold lumber or other materials in place while the other one climbs the front side to do the nailing or marking or whatever else needs to be done.

But that’s not all. If we need two straight ladders, we can simply separate the step ladder and we have two ladders.

If we need to climb higher than the ladder will permit, we make a couple of quick adjustments and we have an extension ladder that is four feet higher than the regular piece of equipment. We can extend the step ladder from 8 feet to 12 feet, and we can do the same with the separate straight ladders.

But that’s not all. What if one leg is too high or too low and the ladder(s) lean? We have that covered, too. Our ladder has self-leveling adjustments that can be made within seconds.

And what did it cost us to build this ladder$280? Not even close. We have a total of less than $6 tied up in the entire ladder and its adjustments.

Want to build one? Here’s how:

We started with 2-x-4 pine rails and 1-x-4 oak steps or treads. You, if you decide to build the ladder for yourself, will need four of the 2-x-4 timbers and 12 steps. You will also need a top plate (made of 1-x-6 pine) and two 2-x-4 support and stabilizing timbers for the sides of the ladder. These latter pieces should be about 2.5 feet long. And you will need a number of nuts, bolts, and washers, or you can do the whole thing with either screws and nails. If you use bolts, they need to be 4.5 inches long. Quarter-inch bolts will do fine.

When you have cut your 2-x-4s (we chain-sawed ours and cut back on costs greatly), you can stand them, edges facing out from the wall, so that they lean against the wall at the angle you want to have for the ladder. A reasonable angle can be reached by setting the bottom of the 2-x-4s three feet or so from the wall.

Now use a level to help you mark the bottom and top cuts so that they will be horizontal when the cuts are finished. Cut all four 2-x-4s at both top and bottom.

Next, mark the locations of the steps or treads. We spaced our steps one foot apart, so measure off the step locations and mark them. Lay them off from both sides and connect the marks with a pencil mark across the entire face of the timber. If your treads are to be one inch thick, make another mark parallel to the first one but one inch either higher or lower. Do this for all step locations.

Next, start at the bottom of the rails and measure and mark off locations two inches apart, or 1.5 if you prefer. These marks should be only pencil dots along the center of the rail. When this is done, drill a quarter-inch hole through the rail at each of the marks.

Cut four lengths of 2-x-4 one foot long and mark and drill these the same way. When all four are finished, use bolts and wing nuts to attach the lengths to the inside of the rails. Tap the bolts through the holes to be certain that they will move in and out of the holes easily.

Your next step is to make a rabbet cut between the tread marks you made earlier. Make the cuts at least one-fourth inch deep, but preferably one-half inch deep. The ends of your treads will slide into these rabbet cuts or notches so that they cannot slip out and cause you to lose your footing.

On the outside surface of all four rails you can lay four-foot sections of 2-x-4s and drill holes at the top and bottom of the sections and rails. Notice that in Fig. 1 the rabbet cuts have been made, the treads installed, and the four-foot strips are being attached. Drill a hole every 12 inches in the four-foot section so that you can extend the ladder one foot at a time, up to four feet.

Note also in the photo that the bottom treads are also supported by braces. Fig. 2 shows the location of the braces.

Cut your treads in the following manner: The first should be at least 15 inches long. The second should be 14, the third 13, and so forth to the top of the ladder. When the treads are installed, use screws driven through the outside of the rail and into the end of the tread. This is double protection to be certain that the steps do not pull loose and cause an accident.

When both sections are completed, cut a top cap like the one shown in Fig. 3. The cap should be long enough and wide enough to cover the entire ladder top. Attach the cap by drilling pilot holes and installing long wood screws to keep the cap in place, also shown in the figure. If you wish, you can cut two cap pieces and install them separately so that you can fold the ladder easier.

When the ladder is extended to its full 12-foot height, the cross-arm supports and top caps are still level when an adult is on the ladder, and the ladder is fully stable.

But what about the first step, now that the ladder has been extended? Few people can step four feet high and carry a paint bucket and brush at the same time. We used a very simple way to solve the difficulty. We drilled a one-inch hole at the one-foot level and another at the two-foot level. Then we used old pipe and drilled a small hole in each end. We inserted the pipes through the holes and then used a cotter pin, as shown in Fig. 7, to keep the temporary step from slipping loose.

In Fig. 8 you can see the pipe steps, which work fine. When you no longer need the extended ladder, remove the cotter pins and pipes and lower the ladder to its regular height.

One final step. Notice that in Fig. 8 there are short strips just under the top caps. These strips are bolted to the rails of the ladder. The purpose for the strips is to keep the top ends of the ladder stable when you are using the equipment as a single step-ladder. If it were not for these strips, the two ends would move disconcertingly and may cause an accident. Each time you use the ladder, tighten the wing nuts on the bolts to be certain that they are snugly tight.

If you wish to fold the ladder for storage or movement, take the wing nut and bolt loose from one end of each cross-arm support and let the support swing downward. The ladder will then collapse so that it can be carried or stored conveniently.

And that’s it. We devoted four hours to building the ladder, but that included time to cut our timbers and dress them. As you build your own, feel free to make any adjustments you like for your own needs.

We have used our ladder many, many times, and we find that it works wonderfully well. And we aren’t likely to beat the price. Even the junk they sell in discount stores costs several times what we paid for our ladder, and ours will holdand has heldmore than 400 pounds as two adults work at the same time.