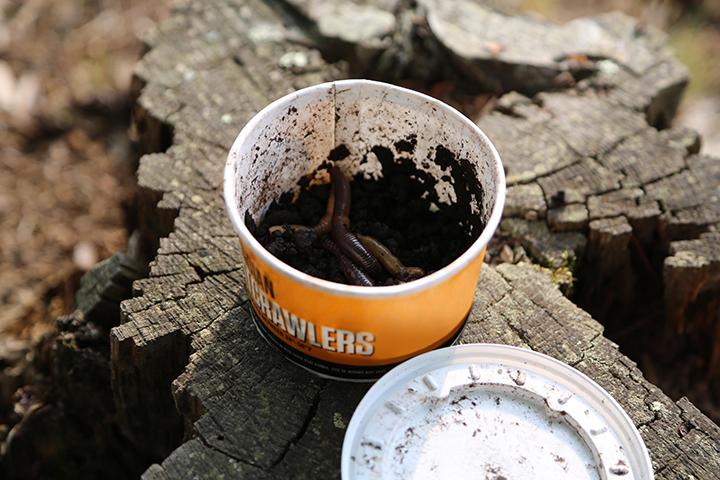 Expensive lures and pricey tackle shop baits can sometimes make fishing an expensive proposition, raising the cost of the intended fish fry to that of a gourmet dinner. So why not look at some of the cheaper alternativesand they work just as well when no bait shop is around, or if you run out of bait.

Most anglers can usually scrounge up some live bait in the backyard or at streamside. Dig in the garden or compost heap or under stones for worms. They can also be found on the sidewalk or pavement after a rainy night. Small redworms (one to three inches) are usually found in manure, compost, humus, or other organic debris. Medium-sized garden worms (three to six inches) are most abundant in rich moist dirt. Big nightcrawlers (up to 12 inches) are usually found on the surface in sodded areas. Keep your worms in wet moss or soil in a cool, dark place. Properly cared for, they should last the duration of your trip.

All three sizes of worms should catch fish. Depending on the size of the worms and the fish you are after, worms can be fished singly, several to a hook, or cut into pieces. For a lifelike wiggle, insert the hook under the worm’s yellowish collar. Run the hook through the worm twice to make the worm secure. Let the end of the worm dangle.

Night crawlers and wigglers are great bait for many species of game fish. They are especially deadly on trout when waters are running high and dirty due to heavy rains. Channel cats, white catfish, and bullheads will readily strike a worm bait.

They’re a top bait for most species of panfish. They remain a premier natural bait for game fish such as walleyes, and largemouth, smallmouth, and white bass. In the spring, before trout season gets underway, try them for cold water suckers.

Worms will live indefinitely in damp soil, if kept away from the sun. They can be fed cracker crumbs, mash, or similar foods. On fishing trips, don’t crowd them. Carry them in a can or bait bucket filled with damp soil or moss.

Minnows are another great all-round bait that will catch almost anything. Small minnows are a great trout bait. Minnows, alive or dead, will also catch bullheads, white catfish, and channel cats. Minnows are another great panfish bait. They’re always a top bait for sunfish, crappies, and perch. Is there a better natural bait for largemouths, smallmouths, white bass, walleys and saugers than live minnows?

Minnows may be caught in nets, seines, and traps. Bait traps with bread or cornmeal. Very large minnows can sometimes be caught on small hooks baited with bread, dough, or “moss.” Those taken from still or slow moving waters will live longer.

Portable, battery powered air pumps will keep them alive in a minnow bucket when it is not flowing in water. A tablespoon or so of peroxide will also help oxygenate the water. So will occasional splashes of seltzer or 7-UP.

Minnows kept too long in a bucket will die from lack of oxygen. If the minnows begin to turn on their sides, stir or slosh the water or blow air into the water with a hose. Porous “breather” bait buckets help to keep water cool so that minnows are less active and hence use oxygen less rapidly. Ice placed on the bucket’s lid so that the water drips in as the ice melts helps to keep the water cool. Use a floating bait bucket so you can keep it in the water while you fish.

Minnows may also be kept alive on a wet towel on a tray in your cooler. They will last all day or more when kept in this manner. It actually works better than just keeping them in a minnow bucket all day.

Crawfish make great catfish baits. Dead crayfish, threaded on a hook, are good for catfish. Channel cats, white cats, and bullheads all inhale crawfish. Flatheads prefer crawfish tails. Crawfish are another good panfish bait. For panfish, use the tail meat, either squeezing out the meat or cracking the shell to partially strip it off. The meat from large pincers can also be used for panfish.

Crawfish are also great smallmouth bait. For smallmouths, use crawfish whole and alive, hooked through the tail. Dead crawdads can be threaded on a hook and fished as an artificial lure for bass. The hard shell is shed periodically. The soft shell stage is best for bait. Just before shedding, peel the shell off to make a “softy.”

They can be caught by lifting rocks in riffles and letting the current wash them into a net. They may also be caught in modified minnow traps. Simply enlarge the openings so they are large enough for the crawfish to enter. Bait the trap with meat.

Crawfish can also be captured in plastic milk jugs buried in the creek bottom. Cut the top off so the jug is completely open at the top. Place it in a hole so the top of the jug is flush with the creek bottom. Bait the jugs. Crawfish enter the jug, go to the bottom and have difficulty escaping. Use several jugs in different sections of the creek so you don’t fish it out. If kept wet and cool, they will stay alive for a day.

In many weed fields, trout and panfish anglers can spot weeds with galls. These marble-sized growths resulted when insects laid eggs in the plants. Inside the gall is a small larva that can be used for trout bait. Due to the small size of the larva, more than one can be used. You can either fish the larva on a plain hook or use it to dress a small jig or other lure.

Bee or wasp larvae, catalpa worms, mealworms, or nymphs of water insects all are good trout and panfish bait and are sometimes effective on smallmouths. Caddisworms can either be removed from the case or have the case lightly crushed.

Best known as live baits for largemouth bass and

other game fish, dead frogs, salamanders, and tadpoles in the two to three-inch range are great catfish bait. Simply string them on a hook. To fish them alive, hook them through the lips or leg muscle, leaving them free to swim. Tadpoles are also good bait and can be hooked through the thick tail. String dead ones on a hook. Salamanders are best hooked under the backbone in front of the tail. Keep them cool and damp.

Leeches live in the litter on the bottom in still waters. Very hardy, they should be hooked like worms and used for catfish and bass. They are very hardy.

Crickets can be attracted with baits such as bread but can be difficult to keep on the hook. Keep them alive in large cans with damp sand on the bottom. Feed them mash or cornmeal. Crickets are great bait for crappies and large sunnies.

Largemouth bass are fond of grasshoppers. They are usually abundant in late summer or fall and are easy to catch, especially by kids. They are tougher than crickets and easier to keep alive.

Hellgramites, the pincer-jawed larvae of the dobson fly, live under rocks in swift water. They are deadly on smallmouth bass. Hook them through the tail or collar.

Live chubs, suckers, and small perch are among the top natural baits for muskellunge and large northerns. Fly fishing with small wet or dry flies and still fishing with worms are the best ways to put some chubs in the livewell. For suckers, still fish on the bottom with worms. Night fishing is usually best, but they will certainly bedevil trout fishermen during the day as well.

Still fishing for perch works well with live minnows in the winter or summer. Fly fishing with streamers, spinner flies, or spoons is very effective in spring or fall. Spinning with small spoons or jigs is equally effective. Jigging spoons are deadly when ice fishing for perch.

Mealworms are excellent trout and panfish bait and can easily be raised at home. All you need are some mason jars, uncooked oatmeal, stockings and some live mealworms from the bait shop or pet shop.

Clean and dry the mason jars and fill them halfway with oats. Add some mealworms to each jar and cover the mouth with the stocking to allow air to circulate and to prevent escapes. For food, place two pieces of potato peel in each jar.

A friend of mine saves used tea bags, dries them out, and feeds the dried tea to his mealworms. The mealworms do not eat the oats. Place the jars in a cool, dark place such as a shed, barn, or garage so escapees don’t infest your house. Replace the potato peels every two weeks.

Within a few weeks, the worms will pupate and emerge as small, black beetles that will mate and lay hundreds of eggs in the oat flakes. When the beetles die, you’ll see hundreds of small worms creeping around the oats that will grow into mealworms in a few weeks.

Mealworms grow faster and enter the beetle stage faster in warm temperatures than in cold. This allows you to refrigerate some whole letting the others mature faster, delaying the beetle stage for some so you have a constant supply of mealworms.

Excessive heat will kill them. Fungus destroys them too if the jars get too moist. To avoid this, limit the number of potato peels per jar and use the stocking as a cover to allow air to circulate freely. Throw away any contaminated jars so the fungus doesn’t spread to others.

So, as you can see, there is a veritable cornucopia of baits that anglers can catch, collect, or even raise themselves.

Heck, the most fun might be in gathering the bait. You’ll keep the kids busy, save some money, and never be without the deadliest fresh baits.

Editor’s Note: Before trying out these baits in your area please contact your local Fish and Game Office for the regulations for your state.