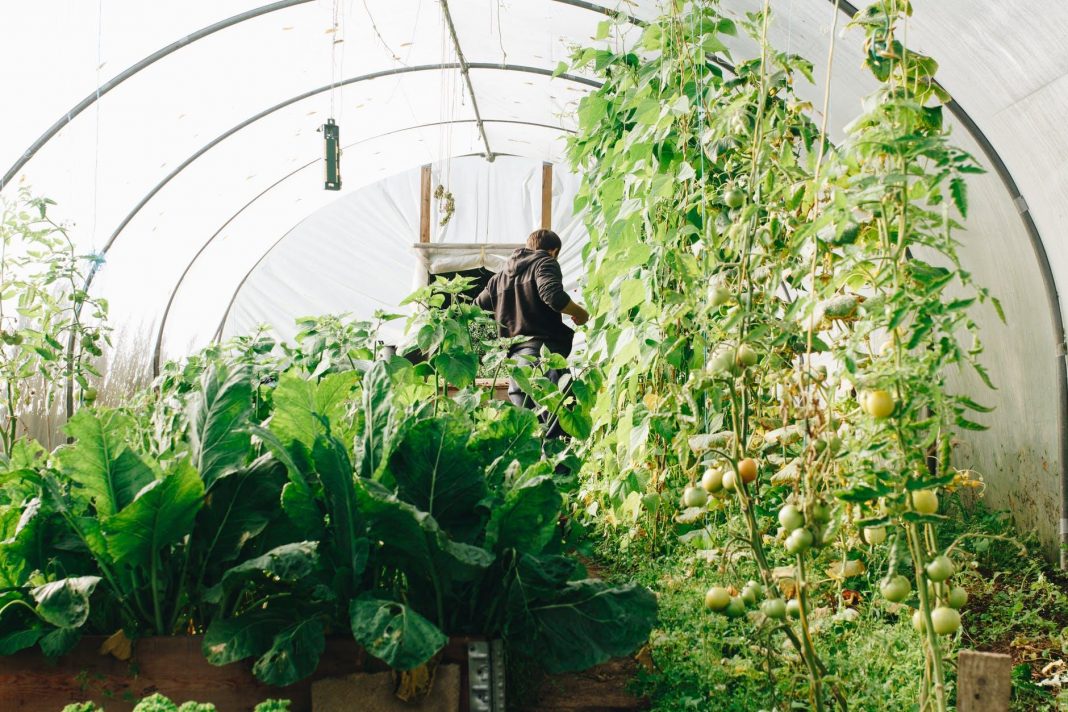 For those of us living close to the land, the production of a dependable and healthful food supply is a primary objective. To that end, some consideration will likely be given, at one time or another, whether to construct a small greenhouse for homestead use. A greenhouse can provide countless hours of enjoyment and a steady supply of wholesome food. The benefits of producing your own healthy plants and crops, extending the growing season, and even the possibility of helping to heat your home are certainly possibilities when utilizing the homestead greenhouse. We have also been able to make several varieties of our own favorite garden plants available for sale to neighbors in the community.

The greenhouse itself comes made in as many styles and of as many materials as there are homesteaders. Each seems to buildor growtheir own personality into their greenhouse structure. From elaborate metal and glass pre-manufactured sun-rooms to inexpensive plastic film stretched over a crude frame, greenhouses run the gamut in design and construction. Yet, each fulfills the same basic purpose of extending the growing season for those of us who depend upon producing as much of our food as we can.

Our own greenhouse is a combination of recycled and new materials. The frame was obtained from a friend who runs a commercial greenhouse. The 1-inch metal conduit had served as the ribbing for a Quonset-style greenhouse until it was replaced by a larger structure. I obtained a supply of the pre-curved metal tubing and constructed the greenhouse frame, lean-to fashion, on the side of the garage/workshop. First, a treated 2 x 4 was bolted onto the exterior wall of the garage below the eaves. The foundation consisted of short 4 x 4 posts set in the ground 12 feet from the wall. Treated tongue and groove 2 x 6s were secured to the posts to allow for some leveling which was necessary on the slight slope. Two by four plates were applied, and holes were bored in both the top wall plate and the base plate to accommodate the conduit. As each rib was set in place and fine tuned to the correct arc, a small hole was drilled in each of the plates, through the conduit, and a galvanized nail was used to secure the rib. Next, the door and window openings were framed, using measurements to accept the used door and window frames that I had obtained for a few dollars at a recent auction. Caulking was applied to the door and window trim as each was set in place to help to seal the fixture.

The greenhouse covering was a result of some experimentation. First, some ordinary 6-mil clear plastic film was applied, but could not withstand the onslaught of the elements. It gave way in about eight months. There are other heavy plastic films specifically made for greenhouses. Those are the types that my friends in the greenhouse business use. Another friend, who raises herbs for drying, grows her plants in a greenhouse using this type of thick plastic film stretched over a frame made of white PVC water pipe. It works well.

The plastic currently covering our own structure is designed for greenhouse use and was obtained from a supplier of the material strictly for homestead-type greenhouses. It consists of a 7-mil woven plastic “fabric” with a 1-mil layer of solid plastic bonded to each side. The woven texture gives much resistance to ripping or tearing and the solid layers bonded to each side help greatly in the weatherproofing. Further, the whole fabric is treated to resist ultraviolet degradation, a factor which normally contributes to the short life-span of plastic films in greenhouse applications. For more information on this rugged woven plastic covering, try contacting Northern Greenhouse Sales, Box 42, Neche, ND 58265.

Inside the greenhouse, scrap lumber was used to build the benches. Heavy wire shelves that had been discarded by a local grocery store were also added to hold more trays of seedlings. The germination bed was constructed by first framing up the sides with 1 x 6-inch lumber. A sheet of foil-backed foam insulation board was cut to fit the bed (made just slightly wider than the seed germination trays are long). Next, a one-half inch layer of sand was spread over the foam board. An electric heat cable was arranged on the sand, and was then covered with about an inch more sand. The cable does a nice job of heating the seed trays and the sand acts as a heat sink, absorbing and distributing the heat.

The thermostatically controlled heat cable maintains a good germination temperature for most varieties of vegetables we grow. Along the front wall, we placed short stacks of used tires and filled them with sand. Atop each stack was placed another tire with the sidewall removed. Cutting the sidewalls from the tires was surprisingly easy, using a utility knife. It greatly increases the amount of available planting area in each tire stack. The top tire was then filled with compost and soil, then seeded in lettuce, spinach, or whatever. They also make a fine planter for an extra-early or late tomato plant. The dark color of the tires serves to absorb heat, and the sand contained in each stack helps to store it. We have not made use of the greenhouse the entire year around, but have had great success extending the growing season. Since it is attached to my garage and shop, I utilized an existing window opening, the wood stove in the garage, a window fan, and a timer to add heat to the greenhouse. By keeping a fire going in the garage, which I often do anyway, and timing the fan to turn on as the day begins to cool, we have been able to pick the last tomato off of the vine on Christmas Eve.

For starting seeds and transplants, the greenhouse is hard to beat. We start by using some of the black plastic flats that stores and nurseries display their containers of plants in. The local grocer saved a bunch of them for us. They are great for filling with planting mix and starting seeds in. I attached some wooden ribs to a suitable piece of plywood, added a handle, and can quickly make rows in flats of soil mix. The planting board speeds things up when planting seeds.

The seeds sprout quickly on the heated bed. Once they grow large enough to move into separate containers, they are gently lifted, one by one, and transplanted into ordinary styrofoam cups. I prepare the cups by poking two or three small holes in the bottom of each to allow water to drain. This can be done, a stack at a time, by shoving a long heavy wire down through the cups. A friend also saved us a large grocery sack full of used plastic yogurt cups that worked well too. We have also used commercial-type plant containers which held six plants each. Any of these containers will work fine and I’m sure you can come up with ideas for other suitable plant cups as well. Anything from tin cans to boxes will work.

Building and working in your own small greenhouse is a very rewarding way to spend some time. Remember, there are as many ways to build a greenhouse as there are homesteaders. The main thing is to use what you have or can readily obtain, adapt the structure to your own circumstances, and then use the dickens out of it. If you are working towards selling plants, you will find an eager market waiting. In any case, you will be rewarded with fresh vegetables nearly year-round, healthy and vigorous garden plants, and the satisfaction of knowing that you’re another step closer to self-sufficiency. For more information, I’d recommend the following publications:

The Guide to Self Sufficiency, by John Seymour, Hearst Publications, New York.