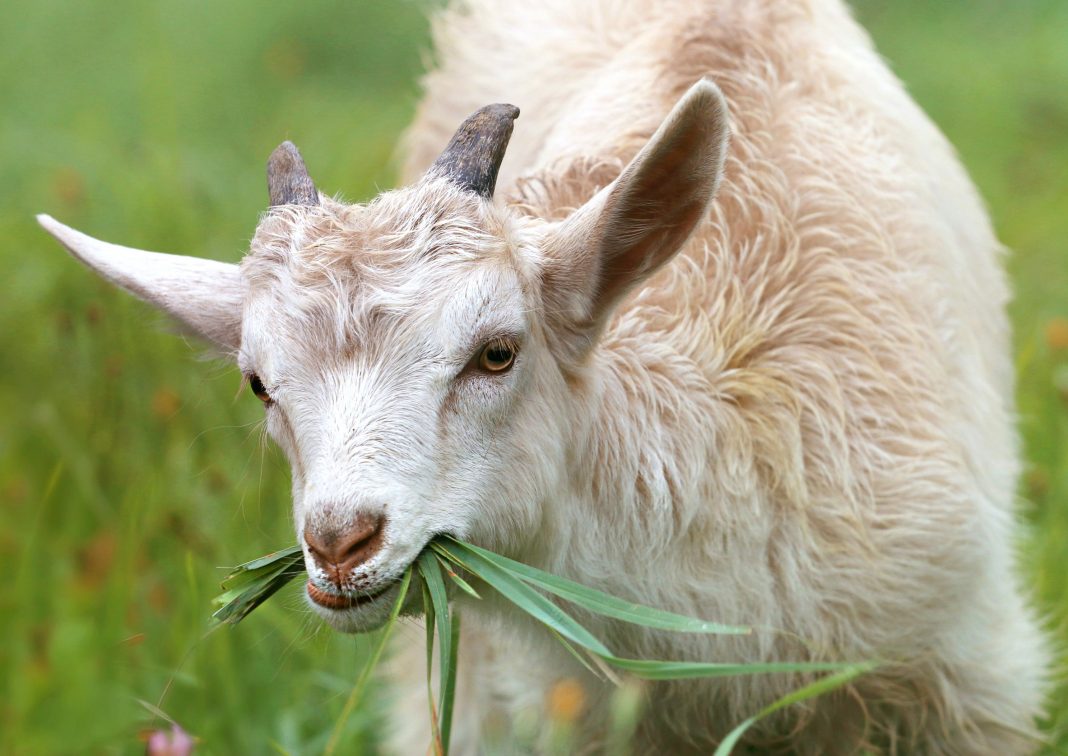 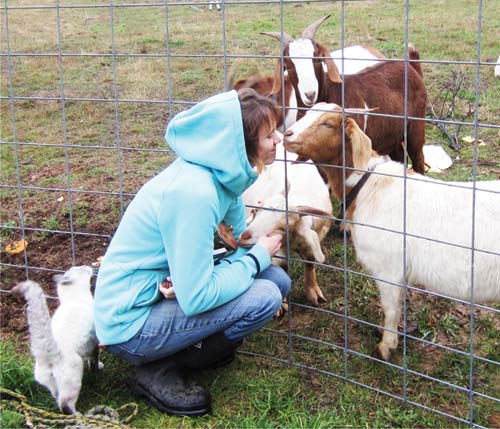 Me with Brownie, Cupcake, Red Velvet, and Flan (mostly hidden).
These were our first four goats, and are all Kiko x Boer crosses. 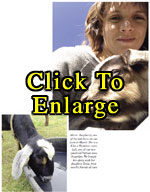 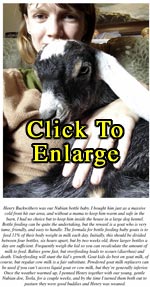 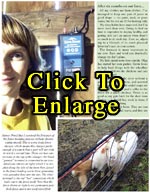 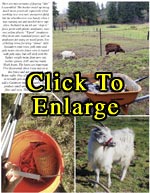 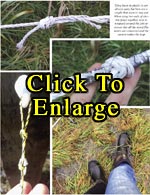 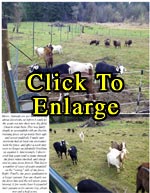 We had decided to focus entirely on getting the house in order before getting any livestock. It was late summer, then, and the grass was lush. Hay had not been cut that year, and it had flopped over. Wide-bladed marsh grasses were bleaching in the sun in tufted heaps. Blackberry vines, lightly dotted with a few tiny berries (not a good year for them) had overtaken all the edges. It needed mowing, weed eating, brush hogging.

I bought them without telling my husband. This was fairly easy to accomplish, since his work schedule keeps him away for a week at a time. A whole week without another rational adult in the house is plenty of time for me to talk myself into having my way.

First, twin does from a nearby commercial meat goat farm. They exhibit the traditional coloration of the Boer goat, the white body with red head. We named the sisters Cupcake and Brownie, for their different shades of fur. This established our naming theme for the year (desserts).

Next, sister Soay ewes from an even closer neighbor. Soay are a rare Scottish breed of sheep which originated on the St. Kilda archipelago off of Scotland, specifically the island of Soay. The ewes were joined by a ram in January, and we are expecting our first lambs in June. I’ve always wanted to be involved with rare breed preservation, so this is very exciting for me.

One week, I brought home a whole trailer full of animals &#151; two goats and four more Soay sheep &#151; bought from an older couple who were selling their mini-farm and moving to a townhouse.

In November I bought three Kiko does, a meat breed developed in New Zealand which I’m particularly interested in for their very hardy nature and good mothering instincts.

In December, a big, old, red buck with impressively long, twisted horns and a gentle demeanor joined our herd.

In January, neighbors (and now friends) of ours sold us their family dairy goat and her young doeling. They’re both purebred black Nubians. Nubians are perhaps the most recognizable of the goat breeds, with their long, pendulous ears. These two were terrified of their new home for several weeks. Nubians are creatures of habit, and it takes them a lot longer than other breeds to adjust to new places and situations.

In February, a not-too-distant dairy farm advertised their extra Nubian bottle babies, so I picked out a handsome buck prospect and we bottle fed him for another month.

Also in February five Cashmere goats made their way home from a new friend who had previously used them in her brush clearing business. Since I’m a spinner and knitter, it seems like a natural fit. We’ll probably add a Cashmere buck in the near future.

In March, the first of our own beautiful babies were born. There is nothing quite like the joy of new baby goats born on the farm. Two of our Kiko mamas kidded in the early morning hours, and their babies were dry and nursing by the time I discovered them at morning feeding. One of the attributes that drew us to the Kiko breed is their reputation for very easy births and excellent mothering ability. Creampuff went first with twin bucklings, which we named Blackberry and Blueberry. A few days later, Tiramisu gave us a perfect, large doeling, Raspberry. These particular kids are crossbreeds; their sire is a Myotonic (sometimes called a “fainting goat”). Both the Kiko and Myotonic breeds are considered meat goats, and this cross should produce very fast growing, vigorous kids. By the time you read this, several more of our does will have kidded, and we’ll have adorable babies coming out our ears. I take the opportunity while the does and their babies are confined for a few days to take care of any medical issues, give everybody a thorough inspection, administer shots and supplements, and generally make sure everyone is in excellent condition before turning them back out into the pasture with their babies. Producing milk takes even more calories than pregnancy, but luckily at this time of year our grass is growing so fast that the goats have all they can possibly eat.

Along with our ever-growing herd comes the need for ever-expanding fences. After the considerable expense and effort of the fences we built in the fall, I was not keen on repeating the process to enlarge the goat pasture. I decided to learn to build an electric fence instead.

The best learning resource I found turned out to be a couple of employees at our local feed store who had experience building their own fences. They pointed me toward the various components required: the charger, grounding rods, clamps, insulated wire, various insulators, and poly rope. Although I had some guidance, most of the info I needed was contained in one little line drawing inside the fence charger package. It detailed the required grounding system (three 6-foot grounding rods) which is very important. If your system is not grounded properly, then when your livestock touches the wire they won’t complete the circuit. If the circuit isn’t completed, then there’s no zap. If there’s no zap, there’s no fence.

I’m looking forward to expanding the fence again soon, and adding cross-fenced areas in order to begin rotating pastures. Eventually, once enough of our underbrush has been cleared away, I’ll be able to start separating the sheep from the goats, and keeping the horses in their own area. For now, they all run together. It isn’t ideal, since each species has some specific requirements, but while we’re getting started it’s the best we can do. I’ll take it.