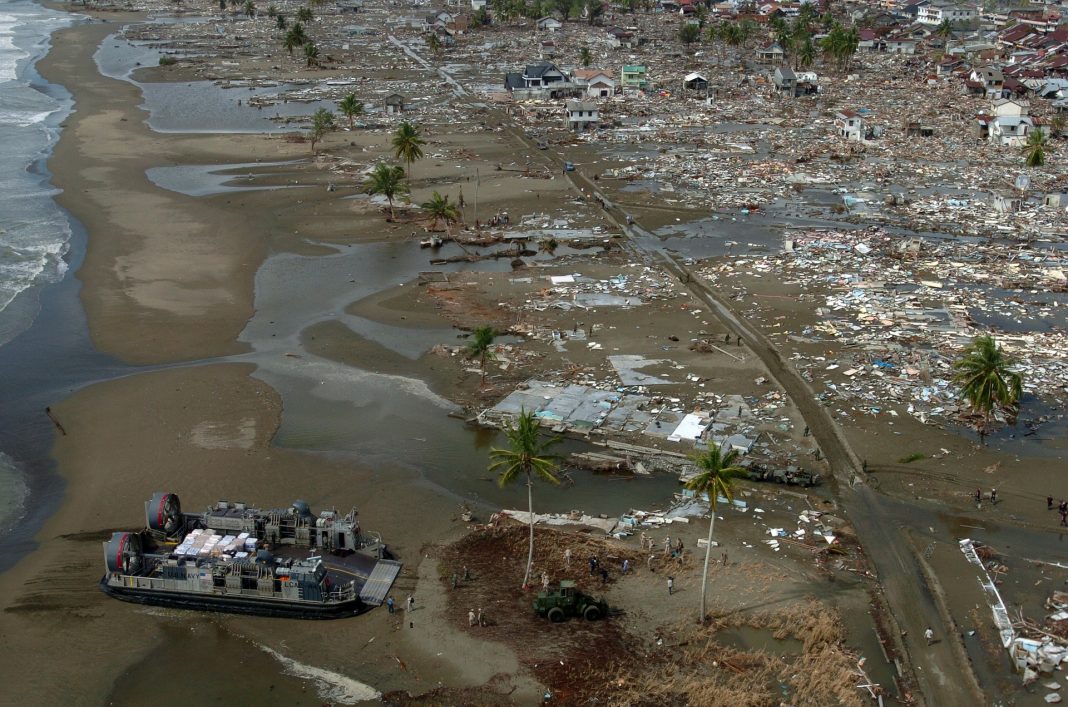 It’s difficult to keep up with the dizzying pace of disasters various people say will befall mankind, everything from global warming to terrorists floating a nuke into L.A. Harbor. So I thought I’d talk about a disaster that is certain to happen some day, namely, a 100-foot tall tsunami slamming into my little town of Gold Beach. No scientist on earth disputes that eventuality. It’s just a matter of when.

I’ve written before about this “problem” Gold Beach has, in the July/August 2005 issue. In the same issue, John Silveira did a major article on the Cascadia Subduction Zone, the earthquake fault line 50 miles offshore that will cause the tsunami. I want to revisit it because this disaster is for real. It’s not hypothesis, not conclusions based on iffy evidence, not scare tactics aimed at enhancing one’s political power. This is guaranteed calamity for my town.

Our grammar and high school in Gold Beach hold tsunami drills. The citizens have preparedness meetings. Although many residents of the town are in denial, those charged with the responsibility of preparing the town realize that some day, maybe tomorrow, maybe not for another 50 or 100 years, the fault line will slip, with the Juan de Fuca Plate sliding under the North American Plate, and the land on which Gold Beach sits will likely drop down a few feet or yards before a wave scientists say may well exceed 100 feet will sweep ashore in about 15 minutes and annihilate the entire town, grammar school, high school, court house, everything.

About two weeks ago my family went to a high spot about a 10-minute run above the grammar school where we talked about what my children would do if the tsunami came ashore while they were in school. Two of my boys are in the grammar school, and one is in the high school. We talked about the panic that might afflict their classmates and teachers during the long rumbling earthquake that would precede the big wave, and how they should start running immediately to this spot. Time was against them, I stressed. The wave would be travelling at about 200 miles per hour from a spot just 50 miles offshore. Mom and Dad worked just down the street from the school, a little closer to the ocean, so we would be right behind them.

I had already explained to them the physics of the danger they might have to face. It would not be just one wave, I said, but a whole series that could last several hours. The biggest wave could be the second, the third, or the fourth. Stay on the high spot and tell your friends to do the same. We would all meet at the spot, and only then, when we had found each other, would we make our way to our home, 17 miles through the mountains, over what would likely be a barren wasteland of ruined houses and dead bodies.

We also talked about the 72-hour pack we had previously assembled. It was in Mom’s car, and we would bring it if we had time to get it. But we emphasized they should stop for nothing, but start running immediately. Even if your teacher says wait, don’t wait. It’s all about time and beating the wave to the high spot before it catches you.

If the earthquake and tsunami occur while we’re at home, which I calculated was about 70% of the time, we should be okay, unless the earthquake causes our house to roll down the mountain. We are 1½ miles inland, at 1500 feet, on the edge of a hill that gives us a clear view of the ocean. We’ll be able to hear the wave coming ashore from our house. Their classmates, however, 90% of whom live in town, might not escape unless the earthquake wakes their families and they get to high ground in time. We’ll be expecting guests at our home if we’re lucky enough to be here or get here. Our home is prepared for anything. Lots of food and other supplies. Our neighbors might need a hand. This is a remote area, so help will be a long time in coming after a major disaster. Bigger cities come first.

The last time the Cascadia fault ruptured was 307 years ago, and it ruptured 200 years before that. There have been 17 magnitude 9 or greater earthquakes in the Cascadia Subduction Zone in the last 10,000 years, scientists say. The quake that caused the Asian Tsunami of Dec. 26, 2004 that killed 187,000 and left 43,000 missing was a magnitude 9.1 to 9.3. Scientists still aren’t sure. The greatest quake ever recorded by a seismograph was in Chile in 1960. It was a magnitude 9.5.

Scary stuff, isn’t it? Coastal towns and cities along the entire 700 miles of the Cascadia Subduction Zone, from Eureka, California to Vancouver Island in Canada, face the danger. Few knew it until the Asian Tsunami of 2004. Now everyone is wondering when it will happen. This is the real thing, not fantasy!