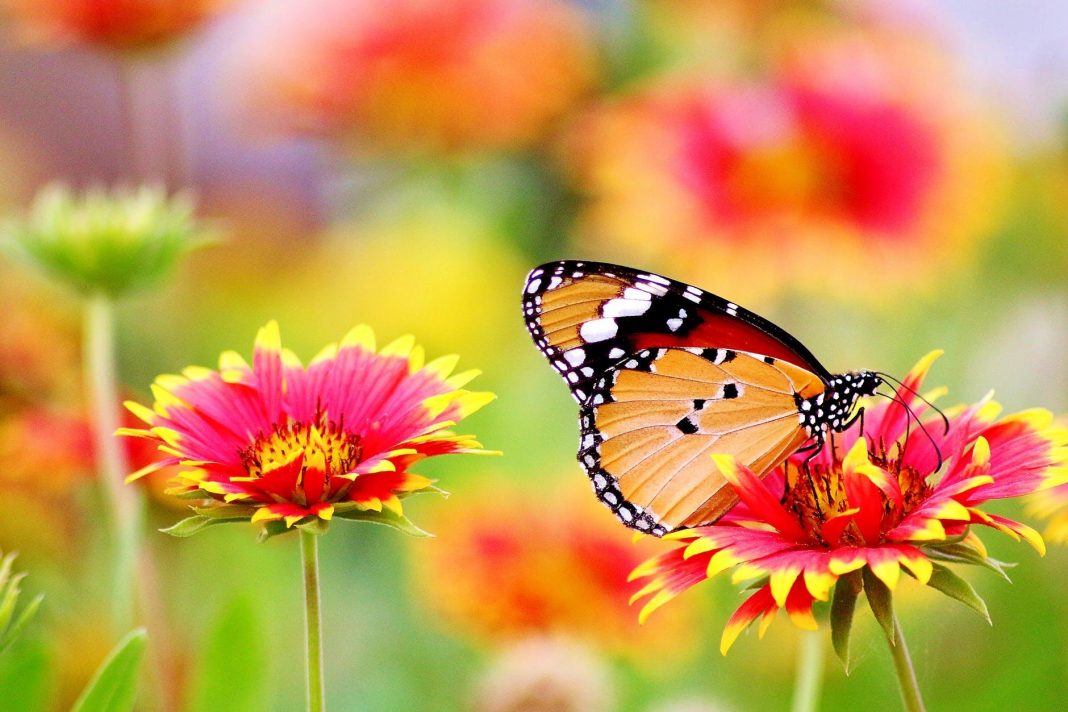 Along with raising food plants, I like to tuck in a few flowers  both annuals and perennials. There’s something about bright orange marigolds or stout purple phlox that gives a lift to the spirit. When I go to the garden early in the morning before Old Sol begins his daily summer routine, it’s pure pleasure to see flowers adding their colors to rows of what might otherwise be only shades of green. Not that there’s anything wrong with a palette of various colors of green, but put in a splash of color here and there and the whole garden takes on a visual turn for the better.

Some food plants, such as okra, are versatile plants. They not only produce beautiful flowers, but they also bear edible seed pods. In some parts of the world, okra is grown only for its showy yellow blossoms with dark red centers. It is used as a background plant and pods are snipped off just as other flowers are deadheaded. However, those of us who value the pods make good use of them in gumbo, vegetable soup and other savory food.

Jerusalem Artichokes are another example of food and beauty combined. The underground chokes or tubers are good either cooked or eaten raw. The tubers are cleaned and boiled like potatoes and are delicious mashed and seasoned. The crispness of raw chokes makes them especially desirable to use in salads or with dips. They are not bland tasting but have a nutlike flavor. The fact that diabetics may safely substitute them for potatoes makes them valuable to those folks. Bright yellow single petal flowers produced in mid-summer are eyecatching and long lasting when used in bouquets. They have a sweet but not overpowering fragrance. Jerusalem Artichokes should be grown along a fence or close to a support, as they often reach 6 to 7 feet in height and have a tendency to lean over from high winds.

Foot-high marigolds are showy grown in front of taller plants, but they do need full sun, so it’s not wise to put marigolds where they may eventually be completely overshadowed by tall plants such as tomatoes. They thrive better near shorter plants  bush beans, for instance. Inca II Hybrid Marigolds are a good choice for the garden. The Incas begin blooming early, hardly ever have to be staked and will bloom until frost if kept watered and old blossoms snipped off.

Whereas the Inca II Hybrid Marigolds and others are grown for their beauty, there are actually bright colored marigolds noted for their ability to protect other plants from root nematodes. Nema-gone and Golden Guardian varieties are both listed as being effective in controlling nematodes, those tiny pests that live in the soil and feed off the roots of many of our vegetable plants causing them to wither and die. In order to avoid using any kind of chemicals in their gardens, many gardeners plant these nematode repelling marigolds right alongside any of their plants likely to fall victim to nematodes.

If you want to attract hummingbirds and butterflies to your garden, try planting some Scarlet Sage (Salvia coccinea). Their tall spikes of cheery red tubular flowers come into bloom early in summer and continue until frost. Actually, the hummingbirds will have departed for sunnier places before the Scarlet Sage is done in by cold weather. This plant is treated as an annual, but it will sometimes winter over in mild climates. To get a head start for the sake of the hummingbirds, start some seeds indoors and put plants in the ground after danger of frost is over. It won’t take long for flower spikes to start growing.

To hear hummingbirds zooming by and see them hover around Scarlet Sage and other flowers is a fringe benefit of gardening. We have other birds, too  scarlet tanagers, cardinals, blue jays, phoebes, song sparrows, robins and on and on. Seldom do we find any pecked tomatoes or other bird damage. Birds flitting about searching among garden plants for various insects, caterpillars, etc., lets us know our garden is being well policed. This is a good reason for not using harmful chemical sprays or dusts in the garden.

In return for the vigilance of the birds, we provide a bird feeder and a bird bath located some distance from the garden. For the ground feeders like doves, we have a place in the driveway where we scatter mixed grain and cracked corn. (Of course, the doves aren’t the only birds feeding in the driveway. ) Maybe the birds are more hungry for insects and worms than anything else when they search among the food plants.

Two outstanding evening blooming plants that will add color and interest to the garden are Four-O-Clocks and Datura. To be on the safe side, both should be treated as annuals above Zone 8. They both need plenty of space, so they are not recommended for small gardens. If there is room, however, these two will not only perfume the air with the opening of their blossoms, but they will attract a number of large night flying moths which are certainly fascinating to watch.

Four-O-Clocks range in color from white to deep red and yellow. Some are even variegated. Flowers open in late afternoon, stay open all night and close as the air warms in the morning. Like Datura, the flowers last only one night with new ones coming on daily. Children often make stacks of the tubular shaped flowers calling them “Four-O-Clock chains”.

One flowering plant I can count on to make a showing is Perennial Phlox. I try to raise more than one color, but somehow the deep lavender flowered ones seem hardier than others. Consequently, I have plenty of those. Butterflies love them and sunny days bring out the fragrance of the flowers. Perennial Phlox plants grow about 3 feet tall and produce a single large cluster of blossoms at the top. When the flowers have faded, the cluster is discarded to encourage smaller flowerheads to branch out from the main stem.

I believe Zinnias bring out the best in people. They are not only beautiful, but they are easy to grow and come in umpteen colors and types. The plants range in height from dwarf to about 36 inches high and blossoms are from single to double to shaggy. Zinnias come in a wide range of bright colors including chartreuse. Bees and other nectar seeking insects congregate more closely around the single bloom as they are more accessible to them. A special spot where Zinnias can soak up the sun will more than pay for itself in flowers and mental relaxation. Be sure to have a shaded lawn chair nearby so you can comfortably take time to watch them grow.

Originally considered a wildflower, Melampodium has increased in popularity to the extent that it is now for sale in hanging baskets, six-packs, and so on. I like to plant it along the edges of raised beds where it makes a nice compact growth covered with yellow daisy-like flowers. Many pollinating insects like to visit those flowers and, so far, I have had no trouble with Melampodium being subject to mildew or other problems.

Many folks are partial to Morning Glories and, if so, there’s no reason why they can’t be enjoyed in a garden, too. At least the vines will quickly rise above everything else and their shade won’t usually interfere with other plants. There’s nothing more beautiful than a fresh crop of Morning Glory blooms waving gently in the morning breeze. Vines need a tall type support not likely to go over in a strong wind. A high-rise bird house such as used for purple martins is ideal as the birds have usually taken their families and departed by the time the vines get really dense at the top.

Although most summer flowers like marigolds will bloom until fall, some will gradually play out with the coming of short days and cool nights. That’s when fall flowers can supplement the loss of the bright summer ones. Chrysanthemums are a good choice. Either raise the plants yourself or buy small plants at a nursery and plant them early enough to give the young plants time to grow and produce their myriads of colorful blossoms.

Chrysanthemums will brighten a garden until serious frost comes along as they are a hardy lot. Here in the South, after plants have finished blooming, we can cut our plants back almost to the ground, give them a light mulch and they will sleep through the winter. New growth will begin with the end of spring cold spells.

The list is almost endless when it comes to flowering plants that will enhance the appearance of a garden. One caution is to stay away from plants that may become invasive, such as Oxalis. I have personally had a battle with that one  beautiful little mounds of green clover-like leaves and pink tubular flowers. It not only spreads from small tubers, but from seeds as well. Ignore its spreading and Oxalis will take over a garden. A few others, as pretty as they may be, are also on the invasive list. Sorry to say, Four-O-Clocks and Morning Glories are two of them. Talk about seed production!!

Indoors there’s nothing like a small bouquet of fresh flowers on a dining table to give it a happy look. It’s even better if the flowers are on the fragrant side.

Use a little imagination in your vegetable garden to convert it from a place of all business to a place where relaxation plays a part, too. What’s that old saying about “All work and no play…”?