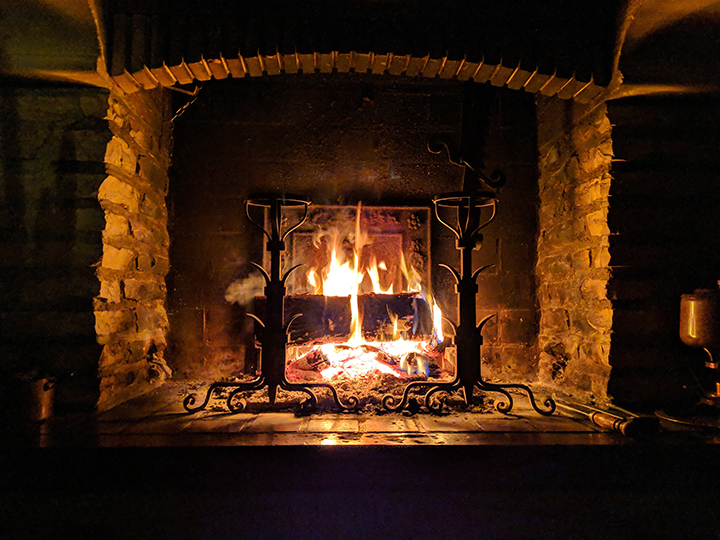 Several years ago we experienced a prolonged winter storm that left power lines down and thousands of people without heat, hot water, and operative cookstoves. And for the better part of the week they learned to live a little like the pioneers of old. 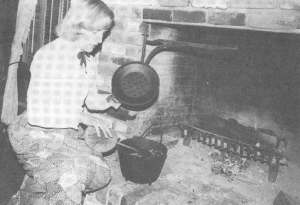 A pot of stew, baked potatoes under the coals, and a warm fire add up to wintertime pleasures

For the first time in the lives of many of them, they did not harp and harangue at their children to try to be more like the nation’s founding fathers. The founders of this country, they now realized, endured more than a few hardships like not having a McDonald’s or Burger King to run to when wild turkeys are scarce.

I’m not talking about the elderly and the physically impaired but about the young, active, and physically able people who had devoted their lives to driving to the office or shop, putting in their eight hours, and driving back home to their television sets and electric comforts.

We (I’m almost embarrassed to admit) had a ball. Earlier in the year we had laid in a woodhouse full of good firewood; we had harvested from our garden and small orchard fruits, vegetables, and other edibles; and on a trip to the supermarket we had bought flour and other necessities.

Our old house had four fireplaces, and in one room we had a huge woodburning stove. We knew that heating would be no problem, and cooking would be a snap.

We set about making out menus. For breakfast we wanted bacon, eggs, stewed apples, hot biscuits, and coffee. So I quickly rolled out some dough and cut it into biscuits, placed the biscuits in a huge cast iron frying pan, and covered the fry pan with an old aluminum pie pan. 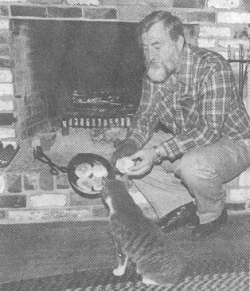 Frying pans make good bread pans, and even the cat enjoyed the bread.

We placed the pan-oven in front of the bed of coals and tilted it toward the heat by placing a small piece of wood under the back side. Then we raked out coals onto the hearth and set another pan on the coals to fry the bacon and eggs.

In a pot placed over another small bed of coals we chopped up apples and added a tiny amount of water and several spoonfuls of honey from our beehives. A coffee pot replaced the apple pot when the apples were ready.

Within minutes we had our breakfast and more. The bonus was the inspiration to try other dishes, to be adventurous and to risk total failure, if necessary, in order to learn more.

For lunch we decided to prepare onion bread, grilled chicken, baked potatoes, and grilled apple rings. (We like apples and eat them three times a day and for between-meal snacks.)

I used some bricks I had left over when we built a patio and made two stacks, one on each side of the fireplace grate. Then we laid the grill from our regular charcoal grill over the bricks so that the grill itself was a foot or so above the flames.

This time we started the chicken early, let it grill for an hour over the hot coals, and then I added the onion bread which was made simply by rolling out dough into the shape of a fat hot dog and slipping onion rings over the dough.

We placed the dough-dogs on the grill and let them start to cook. As the bread baked (or grilled!) the onions were cooked also and the juices seeped into the bread, giving it a most delightful flavor.

While we were at it, we grilled carrots and other onion rings along with the apple rings. A salad (my wife absolutely refused to let me grill the salad) completed the meal, except for a layer cake I baked in the coals.

To bake the cake, I used the regular batter, consisting of two cups of flour (plain), baking powder, a cup and one third of milk, two eggs, a cup and one half of sugar, three fourths cup of margarine, and a couple of teaspoons of vanilla flavoring. We used regular cake pans for the batter and turned an aluminum pie pan upsidedown over the cake pans, slipped the layers under the coals, and let them bake alongside the potatoes we had wrapped in aluminum foil and placed in the coals.

For icing we used a basic seven-minute recipe featuring egg whites, granulated sugar, and vanilla flavoring, the latter to be added after the mixture was removed from the heat. Because the electric mixer was useless, we held the pot near the fire and stirred with a spoon until the icing was fluffy and stiff.

During the week that we lived without power, we managed quite nicely without the television set and its blaring mind-insulting commercials about the heartbreak of psoriasis, the embarrassment of hemorrhoidal itch, the advantage of one maxipad over all the others, and why we needed a luxury car costing more than our house to make our lives complete. 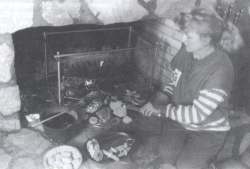 Similarly, we did not miss the stereo and its cacophony of banging and clattering (although we admit to missing our favorite classical music station) and lyrics about how the singer knew it was just puppy love because the mate’s nose was cold.

Instead of re-runs of “My Mother, the Car” we watched the birds feeding on the crumbs we threw out for them and the soft hang-gliding techniques of the huge snowflakes and the swirls of frozen whirlwinds caused by the sudden gusts of arctic air.

In lieu of music we talked, told stories, exchanged ideas and opinions, sang (talk about cacophony!), and enjoyed the silence. When the snow let up for a few moments, we listened to the pecking of the sleet against the windows and the howling of the wind that drew us closer to the fire and to each other.

We read books, outlined in pencil ideas for future stories for some of the publications we work for, and developed story lines for book-length works for future months.

Our major problem was water, and we were able to get five- gallon jugs full from the woodland spring below the house. We used the spring water for cooking and drinking and coffee, and when we needed water for the bathrooms we melted huge potfuls of snow over the fire.

We learned that we could bake pies, an astonishing variety of cakes and other desserts, several types of breads (including a hot corn bread with caliente peppers and bits of onions and chunks of ham mixed in with the batter), and in general enjoyed essentially all of the foods we could have prepared on the kitchen range, if it had been working.

When appetites differed, we found that we could prepare fish, chicken, steak, burgers, hot dogs, or spaghetti sauce  whatever each of us wanted  so that we had a variety of entrees and side dishes. We found that we could grill many vegetables, such as potatoes sliced wide and thick, peppers, broccoli, cauliflower, and tomatoes simply by placing an aluminum pan over the grill and letting the heat produce a delightful version of stir-fry vegetables. 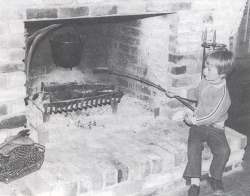 Our favorite meal was a barbecued rabbit that we prepared by rolling the pieces in a mixture of corn meal, flour, black pepper, and whatever else we felt like putting on it. When we built the fireplace we installed a pot holder so that we could prepare soups and stews handily, and we used the holder more in that one week that we had in any month previously.

We learned that roasted peanuts and popped corn came off the hot coals in a delightfully tasty manner. We enjoyed wiener roasts and marshmallow roasts along with the heartier dishes.

And when the storm ended, we were delighted that the sick and physically troubled people in our area, as well as the truckers and others whose duties required them to be out in the weather, could resume their normal lives.

As for us, we were sad to see the storm go and the electricity return. What we experienced was wonderful in a number of ways, and very little of it had to do with cooking food over an open fire. After all, every aborigine worth his salt learned to do that tens of thousands of years ago.

No, what we learned and felt and reaffirmed was that there is a closeness created and required by the loss of modern gimmicks and conveniences that is unparalleled in our collective lives under normal circumstances. We as a nation or as a community or family find that we must talk during commercials or between innings or between telephone calls.

The ice storm was a curse to many; to us it was a very special blessing, and we couch it in terms of fireplace cooking because we have to talk of things rather than feelings and ideas. And the experience was so great that I find myself wishing for another ice storm that would hit only the people who can benefit from another forced opportunity to grow closer to the ones they love.