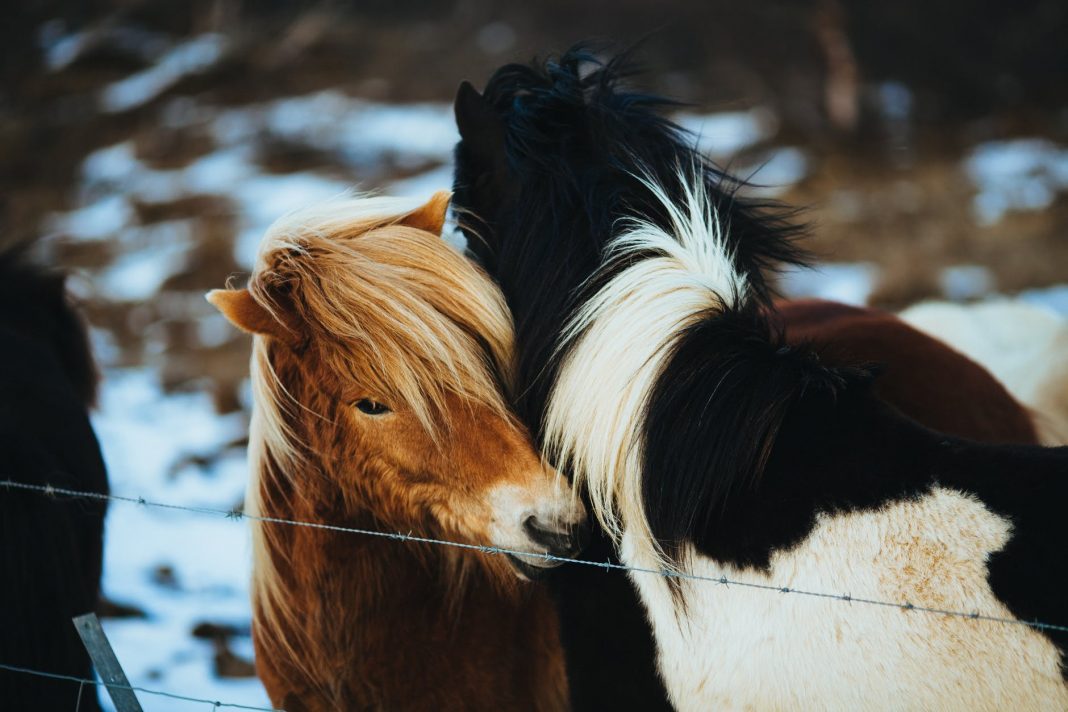 Big Poney died today. He was 34 years old and had been going down pretty rapidly over this hot, dry summer. His bones seemed to poke out at every joint, and as much as I could feed him it never really made a difference.

He had been missing all morning. Following a storm last night, this was the first real day of crisp weather. Something seemed different about the way Poney was missing. Butterball, our other horse, seemed nonchalant enough, but he rarely left the side of his massive partner, and this morning he grazed alone. When I found Poney, my heart sank. He had lodged himself between two trees, and had obviously fallen, then struggled to get up all night . . . through the storm. He was mostly deaf, but when I yelled his name, he let out a deep, scared kind of whinny, and lifted his head. “Oh God, Pone, I’m so sorry . . . Oh, this isn’t the way you were supposed to go . . .” He reached for my hand with his sweet old muzzle. His nubby teeth showed as he stretched his neck.

I phoned Charley, our neighbor, who it seems is always handy to help with the little dirty things that come up on a farm. “Charley,” I started out in my strongest voice, “John’s at work, and Poney is trying to die, and I can’t use a gun. I’ve got a big favor to ask . . . .” Then of course I dissolved.

The first time we saw him was when, as a 25-year-old, Poney (whose official name was Rasputin) came to live with us. He had been a jumper for most of his life, then a school horse. His owner had figured that he would be dying soon, and wanted him to live out the year or two he had left in peace and quiet. He was a Frenchman. He ran a tight ship with his horses, you could tell by the way he walked with a click. John and I could hardly understand his speech, but just did a lot of nodding and smiling as he handed over the reins to this sixteen hands of solid horse. Our first horse.

I laugh when I remember that first evening, and the silhouette of John and Poney cutting a line first across one pasture, then another. We had to ride bareback, for the lack of a saddle. John was really flying. My heart swelled with pride, and when they finally returned, I ran to greet them. “When did you learn to ride so well? That was beautiful!” Poney was huffing, and John looked half dead. “What the heck are you talking about?” he almost swore at me. “I couldn’t get off! That son of a gun has a mind of his own!”

It’s true, Poney did have a mind of his own, but he used it well. He was a school horse, and after he had schooled us on how he was to be treated, his big-hearted gentle nature couldn’t help but show through. When we rode him, we always seemed to follow his orders, going at his pace and in the direction he chose. If he decided to take a swim, we had to swim, too. If he wanted to take a path filled with briars, so did we, by golly. If on occasion we happened to slide off his unsaddled girth and end up on the ground, he would be right there sniffing to see if everything was OK, awaiting a remount.

On one occasiona “Fairy Party” thrown by our three year old daughter Wrenhe stood patiently while his hooves were painted purple and flowers were woven into his mane and tail. He even submitted to sporting a flowered red sheet and unicorn horn for the day. He knew when to behave. He would shuffle behind as fairy after fairy sat upon his massive back for a magic ride.

Those were warm days, those days of clip clopping along with the baby “June bug” riding contentedly in my lap, the deep comfortable smell of that big old horse wafting back to us. That seems like a long time ago today. The “baby” goes to school now, and he has a new baby brother. Wren lost a hard battle with leukemia, but spent long hospital hours weaving fantastical stories about “What Big Poney is probably doing right now.”

It seems that in our family, we keep time by the animals we have known and loved and said good-bye to. Big Poney’s death marks the end of an era. Our young era. Older isn’t bad though, just more knowing and even a little more glowing. I like it, but I sure will miss that big black horse. So will his young hot blooded partner Butterball.

When Charley came, Butter was grazing quietly. I had locked him into another pasture. After the shot, all was silent. I thanked my good neighbor and we turned to leave when a shrill scream and then another tore out of Butterball. He raced across the field as if he had suddenly gone berserk. Back and forth along the fence line he just flew and kicked. I don’t know how he knew, he couldn’t even see the woods where Poney lay. But he knew, and he wanted to be with him. Clods of dirt hit my face as Butter rounded the corner into the opened gate. He stopped short, then quietly stepped up to his friend. He bit him sort of softly on the shoulder and made a gentle snorting sound. He’s been down in the woods beside Poney for several hours now. I guess I’ll let him stay all day. Somehow it doesn’t seem like I have much right to intrude on what’s going on with them there.