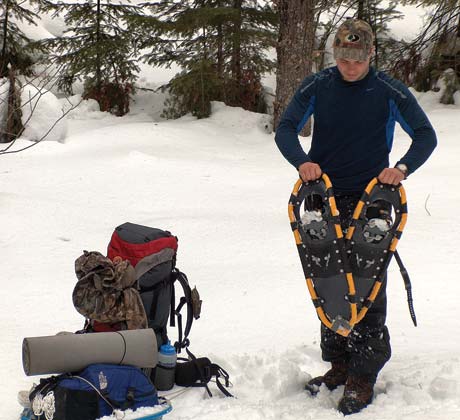 If you live in or drive through places where winter generally means having snow on the ground from autumn till spring, you should have a functional pair of snowshoes. A hard blow can transform four inches of falling snow into four-foot drifts that can trap most cars and trucks. No one can wade through hip-deep powder very far without being entirely exhausted, and people have died trying.

Traditional wood-and-webbing snowshoes have been in use for at least six millennia, and they remained largely unchanged until the late 1990s, when several manufacturers introduced state-of-the-art snowshoes and boot bindings made from the latest high-tech materials. I hung up the ash-and-rawhide military bearpaw snowshoes that I’ve been wearing since 1968, strapped on an aluminum-and-Hypalon® model, and never looked back.

The weight of traditional and new-age snowshoes is about the same for models rated to carry the same mass, but snowshoes with solid decks of tough fabric have more flotation (the ability to support a load based on surface area and weight distribution) and can offer the same load rating in a smaller snowshoe. One myth is that webbed decking of rawhide or neoprene provides more flotation than tube-frame models with solid decking. Think in terms of two canoe paddles, one with a solid wooden blade, the other with a webbed flow-through blade, like a snowshoe. You don’t need to be an engineer to see that the webbed paddle is poorly designed for pushing against water. Per square inch of area inside their frames, solid decks support 27% more weight than webbed decks. Iverson Snowshoe Company rates their Green Mountain 10″x36″ wood-and-webbing model at 220 pounds, Tubbs Snowshoes rates its 10″x36″ Mountaineer model with tubular frame and ArcTec decking to 300 pounds.

Differences in weight between modern and traditional snowshoes are generally attributable to the type of bindings each is fitted with. Atlas Snowshoe Company claims that carrying a pound on your feet equates to carrying six pounds on your back, so weight is important, but a few ounces more to have stable, secure, quick-release bindings that won’t ice-up is a price I’ve been willing to pay. As a young trapper, there were many times when I simply sliced through the ice-caked laces of my bearpaws’ split-leather bindings with my knife rather than fighting to untie them at the end of an exhausting day.

Today you can step into the fastest, most secure and glove-friendly snowshoe bindings yet conceived and be bound for the back country in a matter of seconds. Gone is the sloppiness that permitted snowshoes to flop around under your soles, which eliminates the need for ungainly “tracking” tails like those that drag behind tennis-racket-like Michigan snowshoes. From the ratcheting-strap boot harnesses that revolutionized snowshoe bindings to Tubbs’ 1-click Bearhug model, these new bindings have by themselves greatly improved and simplified the snowshoeing experience.

The new bindingswhich have of late found their way onto several traditional wood-and-webbing snowshoesalmost universally carry stainless steel crampons. In generations past it was often necessary to remove one’s snowshoes to climb steep hills, and coming down was an adventure in sliding. Crampons provide traction sufficient to climb any grade your legs can push you up, and are an excellent brake for sure footing on steep descents. And if your path leads across the sun-warmed surface of a frozen lake, the crampons will keep you on your feet in places where you’d otherwise make frequent hard contact with ice.

Northern tribes of old knew March as the “Moon of the Broken Snowshoes,” a time when warming days “rotted” hard-packed snow. Surfaces that had been hard as concrete in February became treacherous with voids hidden below and sun-softened layers that would suddenly cave-in for several feet all around, sending a snowshoer crashing downward into tangled brush. It was common to “bridge” a snowshoe across two solid points, when that happened, and with all of a wearer’s weight on the unsupported center, wood frames were prone to snap in two. A broken snowshoe could be life-threatening if you’ve broken trail a mile or two through hip-deep powder that won’t support a snowmobile, because you might not be able get back without two snowshoes. Bridging doesn’t appear be a problem with the latest generation of aluminum, plastic, or carbon-fiber frames, all of which have proved to be much stronger than wood.

In one innovative instance, frames were exploited to improve snowshoe performance after an engineer at Mountain Safety Research (MSR) mused hungrily about the Christmas cookies his wife was baking while he soaked in hot bath. It struck him that the cookie-cutter principle could be applied to snowshoe frames, and a few months later MSR’s Ascent snowshoe was setting new standards for traction. By making the frame a vertical wall of aluminum, the entire snowshoe became a crampon, digging into the most hard-packed snow, and enabling wearers to stick to icy hillsides with an almost fly-like ability.

Whichever snowshoe you select, be sure to get one with adequate surface area to support the load you intend to put on them. In the softest powder a large enough snowshoe can only sink three or four inches, and having too much snowshoe is erring on the side of caution. Too small a snowshoe may be worse than no snowshoes, because they might let you sink eight or ten inches into a hole that you then have to lift your foot and the attached snowshoe back out of before repeating the process. Generally speaking, the smallest off-trail qualified snowshoe is in the 9″x30″ range.

Check that the bindings on whichever snowshoe you choose will fit the boots you intend to wear. A common gripe among long-haul dogsled racers who are required to have snowshoes strapped to their sleds is that many snowshoes have “trail” bindings that are too small to fit the full-size pac-boots that are needed in subzero temperatures.

Price-wise, both modern and traditional snowshoes cost about the same, starting at around $70 and increasing as features and materials become more sophisticated.