Solar cooking is a delightful alternative to conventional cooking methods. The solar cookers available today really work and they deserve serious evaluation by a much larger audience. For 40 years, small groups of people have been using and refining some very good designs. But these designs have, for the most part, gone unnoticed even by those involved with alternative energy. With such a lack of support, you’d think they would have vanished from view long ago. But they haven’t. 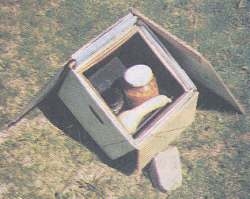 With the collectors back and the glass removed, it’s easy to get at the cooked food. 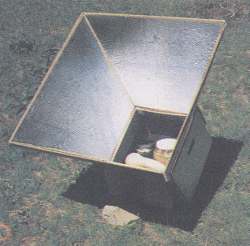 The solar cooker aimed at the sun. 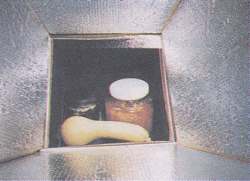 A solar-cooked meal of rice, tomato sauce and winter squash. 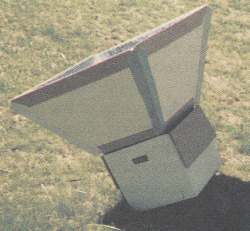 Side view of the solar cooker in action. 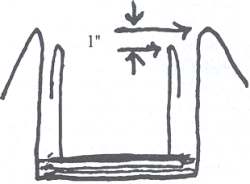 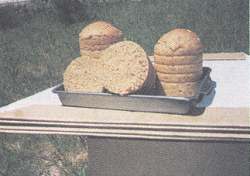 The people who have taken the time to integrate solar cooking into their lives find the motivation to keep refining the designs comes from the tools themselves: solar-cooked foods taste delicious and the ovens are fun and easy to use.

My own involvement with solar cooking began in the mid-seventies. I found myself drawn to the alternative energy movement. Those were idealistic and innocent times, but they were also serious and important times.

Started as a hobby

It was during those days that I saw my first solar cooker and began the hobby that led to the cooker described in this article. I started out building the most efficient styles I could come up with. Later, while keeping this efficiency, I strove to simplify the building process, the materials needed, and the actual use of the cooker. The cooker is now basically cardboard, aluminum foil, and glass. Yet, because of the design, it is remarkably efficient and durable.

It looks so simple now, but you should realize that this simplicity took years of effort and many accidental breakthroughs. The testing for this cooker is now complete.

What I have included here is a very good starter model that can lead you and your family to a lifetime of enjoyment without threatening your pocketbook. A solar cooker can easily be built for under $10.

The first step involves a search for cardboard boxes in your local grocery and department stores. For the oven box, you are looking for two particular boxes. These can be rectangular (easier to find) or square (their collectors work better). The smaller of the two boxes becomes the inner box, so it defines the cooking area and the power of the cooker. For a medium size cooker, the area of opening of the inner box (length times width) should equal 120 to 160 square inches, and it should be 9 to 12 inches deep. The larger box, the outer one, must be two to three inches larger in all directions.

For collectors, find four flat pieces of regular (not double strength) cardboard from appliance or bicycle stores. These should be about two feet by three feet. And gather five to seven more boxes which you will cut up for insulation.

Other things to gather:

Now cut more pieces of cardboard to stuff between the inner and outer boxes until the inner box is wedged tightly. Doubled-over pieces look nicer.

The tops of these filler insulation pieces must be arranged so that, when the glass rests on the top rim of the inner box, it makes a good seal. (That is, you don’t want big gaps where the heated air will escape.) Also, it must be easy to slip a finger under the glass for easy removal.

In use, the cooker will be tilted toward the sun. Therefore, the sidewall, which will be lower when it’s tilted, must be arranged so it will support the glass in position. 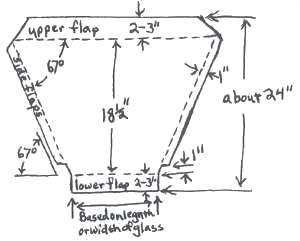 Now paint the inside black. Optionally, you may cut handholds in the outer box and squirt glue under the cuts to keep them from tearing out.

Note for later: The box will smoke slightly during the first couple of times it is heated up, but this is just a curing process. Also, cardboard shrinks slightly when heated, so you will have to repack later to keep the inner box tight.

Draw the collectors, as shown, on the four flat pieces of cardboard. A square cooker will have all four collectors the same size, while a rectangular cooker will have two sizes, based on the length and width of the glass. The 67° angle can be found using a protractor, or by folding a piece of paper like an airplane, as shown in the diagram. 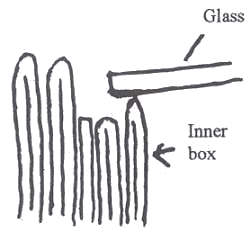 Arrange the filler pieces so the g lass rests on the top rim of the inner box, and so you can slip a finger under the glass to remove it. 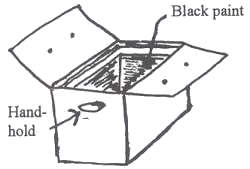 Leave two of the flaps on the outer box out, so you can tie the collectors to them when it’s windy.

Cut out all four collectors. Then take a tool with a blunt point and crease a line along the dotted lines. Bend in on the crease lines. Next, bend the upper and lower flaps all the way over and glue them down. Press with weights until the glue dries.

Gluing aluminum foil to the collectors

Roll foil over the collectors, and rub your finger over the side flap bends to show where to cut. Cut the foil so that it does not quite reach these bends; it will be easier to center later. Do not cover the side flaps.

Smear a glue mixture (two parts water, one part white glue) over the dull side of the foil, using a piece of cloth and two to three tablespoons of glue mix. Line up the collector and lower it onto the foil, tap it lightly, and turn it over. Apply the foil to the side of the collector that is not glued to the bent-over upper and lower flaps. Being a little off center is okay, but if it’s off too much, peel off the foil and try again. Press on the edges of the foil and pull out large wrinkles. Take a clean cloth and rub outward on the foil to smooth it.

For a rectangular cooker, set collectors out as they will fit on the box and glue the side flaps together on two opposite corners. When the glue has dried, poke holes in the side flaps on the other two corners, placing holes near the cardboard bend, and tie these corners together with a cotton cord. When it comes time later to fold the collectors flat and pack them away, the rectangular collectors will be untied and separated into two sets of paired collectors.

You can find the 67° angle by folding a piece of paper as shown here.

For a square cooker, glue two opposite sets of side flaps together, as below. Then lay them out as they will fit on the oven box. Cut off the side flaps from one of the unattached corners. Connect this corner by laying these two collectors next to each other (about ¼” apart), with the foil sides down. Now cut a cloth about 18″ x 4″ and glue it over this corner, as shown. When the glue is dry, fold inward on this cloth hinge and arrange the collectors so that the unattached side flaps are on the outside and line up with each other. Poke holes near the bends of the side flaps, and tie the two segments tightly together with elastic material. This will allow these corners to separate slightly when the collectors are folded flat, but pulls the corners together when unfolded. 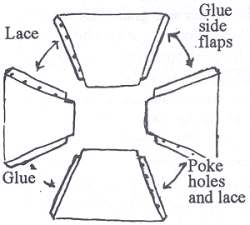 Connect the collector panels with glue and with laces. 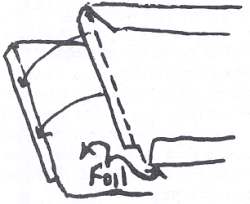 The side flaps are glued together with the foil sides facing each other.

A slip-in piece made from cardboard and cloth is attached to the upper collector. This slips between the cardboard filler pieces of the upper sidewall for quick attachment of the collectors to the oven box.

Finishing up, setting up

The rack: A dark baking tin is used for a rack to hold food and catch boil-over. It’s nice if the rack puts a slight pressure on the sidewalls, for stability. If the baking tin has handholds, these may be bent for a better fit. You can also build a rack from wood, or by bending sheet metal.

The glass: Check again to see that it rests on the top rim of the inner box with no large air gap. The glass will become hot, so handle it by the edges or use a cloth. Keep the glass clean. Remember to buff the edges so they’re not sharp.

Propping the oven toward the sun: Use rocks or other objects in front and back. If you use only one, the wind easily tips the cooker.

Aiming: Use shadows created by the cooker to orient it; don’t look at the sun. Approach the cooker from behind, checking shadows on the sides for east/west adjustments. Touch the oven box and see where the shadow line from the collectors crosses your arm for up/down adjustments. Aim the cooker in front of the sun’s path.

Wind: Poke holes in the flaps left out of the oven box and also in the collectors on the top and bottom. Tie collectors to flaps with cotton cord.

Jars: Boil and steam food in recycled jars, half-gallon or smaller in size. Painting them black will reduce cooking time, but leave a clear strip to see food by using tape when painting.

When cooking, don’t overfill jars with beans and grains, as these foods expand. You can poke a hole in the lid or leave it on loose to avoid pressure buildup. If food is actively boiling, open jars slowly to release any built-up pressure. I’ve never broken a jar because of pressure buildup. If a lid sticks, tap around the edge, or pry up under it, to release any vacuum pressure. It should then open easily.

Learn to cook with more than one jar at a time. Start with the longest-cooking food, and when it is boiling, add more jars. Learn which foods (grains, potatoes, squash, lentils, etc.)and what quantities of them you can cook in one pass, so you can cook when you are gone all day. Learn cooking patterns that fit your lifestyle.

Beans: Use 2¼ cups of water for 1 cup of beans. If you boil them actively over a long time, add more water. Pintos take the longest.

Grains: Most grains cook better if you preheat the water in the solar cooker for an hour or so. Use a two-to-one water-to-grains ratio. Long grain rice can be put in the cooker in cold water.

Vegetables: These cook in jars with little or no water, or they can be added to beans and grains. Potatoes and sweet potatoes cook well on the rack, if lightly oiled. Otherwise, put them in jars. Winter squash cooks in its own skin. Corn on the cob steam-bakes in its own sheath.

Bread: Bread cooks best in dark, one-pound coffee cans. Oil the cans. Let dough rise in the cooker without collectors attached, then add the collectors when you’re ready to bake. Bread shrinks, so it will come out of the cans with a gentle tapping when it’s done.

When the food is cooked, you can fold the collectors down over the glass. This provides good insulation, so the food stays hot until you are ready to eat.