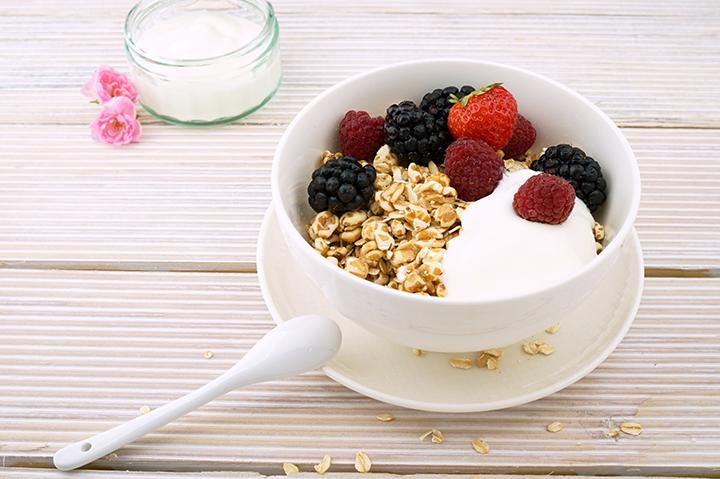 When you get to the point where you’re milking your own cow, you’ll need to figure out what to do with the excess milk. One of the easiest and tastiest options is to make homemade yogurt.

Yogurt is nothing more than the bacterial fermentation of milk using specific cultures. As far as I know, any milk can be used (cow, goat, yak, water buffalo, whatever). Yogurt in one form or another has been around for literally thousands of years. Curdled milk, after all, is nothing new. Because the fermentation process changes lactose into lactic acid, people who are moderately lactose-intolerant are often able to eat yogurt without a problem.

Making yogurt requires two main ingredients: culture and heat. Both must be controlled in order to produce a successful batch of yogurt.

Theoretically, any commercial yogurt (bought at a grocery store) that contains live cultures can be used to culture your milk. However, I’ve had little success following this option and prefer to purchase a yogurt culture in powder form from a supply company.

While there are a number of yogurt cultures available from suppliers, I wanted something I could re-culture myself so I wouldn’t have to keep purchasing new culture. After a bit of research, I found a Bulgarian Yogurt culture through the New England Cheesemaking Supply Company (www.cheesemaking.com). It can be re-cultured indefinitely without the need for fresh culture powder.

So…ready to make some yogurt? Let’s start from the beginning. I’ll pause for a while so you can go milk your cow…

…Now that you’re back, strain and chill the milk and let’s get started.

Start with about two quarts of milk. You can use skim or whole, fresh or store-bought. I prefer fresh skim. Put it in a pot on the lowest heat setting on the stove. You don’t want to heat it too quickly or it will have a burned taste. Keep a thermometer in the milk to watch the temperature. Do not use a microwave.

I like to add half a cup of nonfat dry milk when I get started. This gives the yogurt a creamier texture. Stir the dry milk into the fresh milk until dissolved.

Heat the milk to no more than 180° F. Don’t go any higher than this or the milk will taste burned. This temperature is high enough to kill off any undesirable bacteria and to denature the milk protein so it won’t form curds (as with cheesemaking).

When the milk reaches 180° F, turn off the heat and let the milk cool to between 105° and 110° F. Don’t stir the milk while it is cooling. It will form a thick nasty layer of skin on top. After the milk has cooled, scoop off and discard the skin (don’t try to mix the skin back into the milk; it will only result in strings of skin in the yogurt). Don’t let the milk cool to less than 105°F or it will be too cool to culture the milk. Re-warm if necessary.

Add the yogurt culture. Do not add the culture before the milk has cooled to at least 110° F. Trust me on this; you will kill your culture if you add it to the milk when it’s too warm. Stir the culture in thoroughly.

Now the milk has to be incubated for a minimum of 5 to 6 hours. The longer it incubates, the tarter the yogurt. (I usually incubate mine about 12 hours because I like a tarter yogurt.) Anything can be used as long as the milk stays warm. Several years ago I bit the bullet and bought a Yogotherm Yogurt Maker because it’s non-electric and simple to clean (it’s literally just a plastic bucket that nests inside a Styrofoam sleeve and cover). You could probably put the milk behind the woodstove in order to stay warm, or inside a gas oven with a pilot light, or wrapped in towels and tucked inside a small ice chest. Use your creativity to come up with some way to keep the milk warm. But low-grade heat is necessary for the milk to culture and thicken properly.

After the yogurt has incubated for several hours, chill the yogurt for about 12 hours.

Before flavoring the yogurt, scoop out a few ounces and put it in a small container. Cover and keep this in the fridge. This is your starter for the next batch. The starter is best used within a couple of weeks  the older it is, the less effective it is. If you don’t make yogurt very often, you may have to purchase some more starter culture for your next batch. However, the starter can be frozen and then thawed at room-temperature (not in the microwave!) to store it for longer periods of time.

The yogurt can be sweetened and flavored to your preference. You can use honey, sugar, Splenda, or eat it unsweetened. You can add vanilla flavoring or puréed fruit. My favorite combination is one cup Splenda plus two cups peach purée.

Fresh yogurt will store in the refrigerator far longer than fresh milk. I’ve eaten yogurt that is two or three weeks old and the only problem is it needs a little stirring and has a tarter flavor than fresh-made yogurt.

Making yogurt is such an easy task that it will become a routine way to use up some of the excess milk from your dairy animals.