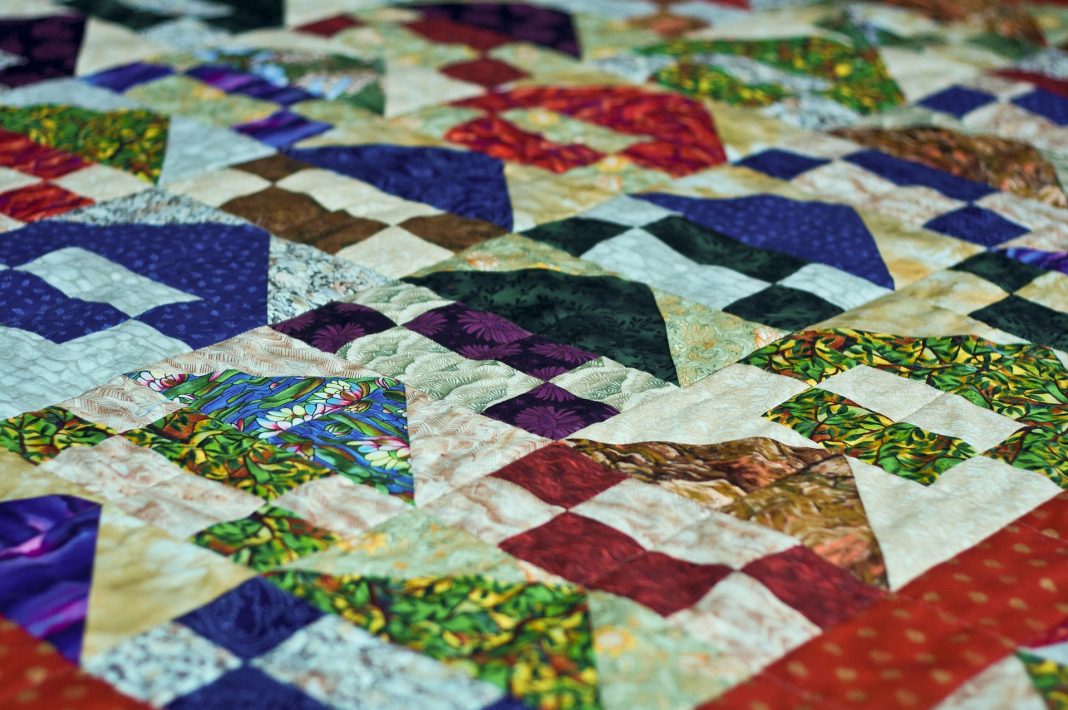 Many of the quilts of yesterday took a lifetime to make. Perhaps the mystical part of quiltsthe aspect that makes them almost humanis the countless hours of work and devotion it took to create a masterpiece of the heart.

Beyond their beauty and usefulness, quilts possess a magic that will never die, for all of life’s hopes and fears, loves and hates have been sewn into them. Long ago, a woman whose quilt took her nearly 25 years to finish, remarked, “I tremble sometimes when I remember what that quilt knows about me.” 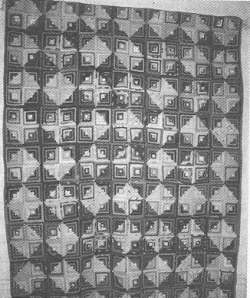 Little is known of the women who stitched the quilts of old; most remain anonymous. The exact origin of quilts is also somewhat sketchy. The name derives from Latin meaning “stuffed sack,” which was translated into Middle English as quilte, meaning “wrap around the body,” providing both padding and blanket. A partial unraveling of quilt history reveals that the oldest example of patchwork, a canopy for an Egyptian queen, dates back to 960 B.C.

Generally speaking, a quilt consists of three layers: the top, the filling, and the back. Wool, silk, or cotton were common fabrics for the top layer and muslin for the backing.

In the earliest quilts, grass and leaves or feathers were used for the filling. After the top had been meticulously pieced together, the three layers were assembled and laid over a quilting frame supported by legs, sawhorses, or chair backs. In the South, the quilting frame was often suspended from the ceiling. The layers were then joined together by quilting, the running of stitches through the three layers of material.

The technique of quilting was used throughout the ancient Near East. When the Crusaders ventured to Eastern lands, they brought back the arts of needlework to Western Europe. The West began importing rich silks, satins, brocades, and lace from the East, and women in all walks of life, from queens to peasants, joined the excitement of quiltmaking that lasted through the Middle Ages and Renaissance. Quilts were coveted and cherished, and often were recorded in ledger books.

Regardless of origin, it was the pioneer women in America whose needles would create a way of life that would influence their whole cultural and social structure. No other art was ever so completely dominated by women or brought so many together to work, including young ladies, for in the 18th century they were rigorously taught that usefulness was happiness. And there was no better way to make oneself useful than to sew. 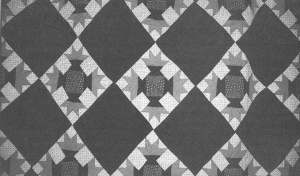 As early as age four, little girls began practicing their stitches. Holding a delicate needle in their tiny, clumsy fingers, they pieced together simple four-patch blocks of plain and flowered calicoes. One woman described her childhood experience: “Before I was three years old, I was started at piecing a quilt. Patchwork, you know. My stint was at first only two blocks a day, but these were sewn together with the greatest care or they were unraveled and done over.” By the time young women were about to be married, the needle had become their constant companion, and they took great pride in the accomplished needlework of their quilts.

Since cloth was not plentiful in the colonies and most women could not indulge in the luxury of imported silks and satins, creating quilts meant making their own cloth or piecing together whatever scraps were at hand. Often inspired by familiar objects and reflections of their new life, quilts were given such names as Windmill, Little Red Schoolhouse, Wedding Ring, Lost Ship, Horseshoe, Lone Star, Bear’s Paw, Wild Geese, and Drunkard’s Path.

The most popular quilt pattern during colonial times was undoubtedly the Log Cabin, the first ones made of thick woolens, consisting of blocks which always have a square center (red and yellow were preferred, to symbolize a glowing chimney) with strips of material, half dark and half light, sewn next to each other, reminiscent of log cabin construction. There are several variations of the Log Cabin: Barn Raising, Light and Dark, Straight Furrow, and Streak of Lightningall influenced by the skillfully planned arrangement of contrasting colors. Because of their strong construction, Log Cabin quilts were rarely quilted, but instead were knotted together or tufted.

The Log Cabin was only one of the many patchwork quilt designsthere simply were hundreds of them. Regardless of the design a woman chose, all quilts had the same basic meaning. They were the very core of a woman’s life, encompassing her passions, attitudes, beliefs, noble spirit, anger, and indignities.

Of indignities, she suffered many. These were the days when women were not allowed to vote, and a woman’s main tasks in life were to please her husband, bear his children, and keep his house. Yet there always persisted a dogged will to make something extraordinary in the midst of duties, to weave pleasure into toil. There also remained a poignant faith in the future, and the idealism of romantic love never wavered.

All young ladies were expected to marry shortly after their education, possessing a dowry of quilts, usually thirteena baker’s dozen. Twelve quilt tops were to be finished before her engagement.

The tops usually were not quilted until she was reasonably certain of marriage, for it meant a real outlay of money to purchase the fillings and backings. When a woman was pledged to marry, the thirteenth quiltcalled the Bride’s or Wedding Quiltwas designed and quilted. Often the most elaborate, many of these were of unrivaled beauty.

Caroline Cowles Richards noted in her diary, dated 1862: “I have been up at Laura Chapin’s from 10 o’clock in the morning until 10 at night, finishing Jennie Howell’s bed quilt, as she is to be married very soon. Almost all of the girls were there. We finished it at 8 P.M., and when we took it off the frames we gave three cheers.” 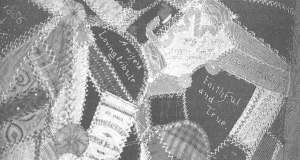 Close-up of Crazy Quilt. This was made in 1893 for a wedding. Notice the words, ‘A wife’s loving tribute’ and ‘Faithful and true

After a woman had married and settled into “domestic tranquility,” she looked for ways to beautify her home. Whether alone or in company, her restless needle never stopped.

As Ellen Birdseye Wheaton wrote in her diary in 1851, “Elizabeth and I spent most of the day in sewing, and accomplished quite a satisfactory day’s work. What a busy set of hands to direct and control. Sometimes, I think I shall faint and fall down by the way.”

Second only to church meetings, quilting bees were extremely important to women’s social lives. With few newspapers and distant neighbors, quilting bees were a chance for women to exchange confidences and affairs of the heart, all the while making painstaking stitches that were performed with patience and a commitment to the humblest detail in creating a handiwork of startling invention.

There were serious discussions, too. As Harriet Beecher Stowe wrote in The Minister’s Wooing, quilting bees enabled one to learn “how best to keep moths out of blankets, how to make fritters of Indian corn undistinguishable from oysters, how to bring up babies by hand, how to mend a cracked teapot, how to take grease from a brocade, how to reconcile absolute decrees with free will, how to make five yards of cloth answer the purpose of six, and how to put down the Democratic party.”

As the dust of the westward movement settled, resources expanded, and women had more free time for quiltmaking. The quilts of the late 1800s illustrate the extravagance of the Victorian Age. Pieces of silk, satin, and velvet, rich in color and texture, were transformed into the most unusual and handsome quilts.

Enter the era of the Crazy Quilt, which was pieced from materials of irregular shapes, sizes, and colors. In these years of sentimental overflow, quilts were made with bits and pieces of personal pasts: silk neckties and shoe labels, lace from a wedding veil, political ribbons from campaigns.

Crazy quilts added to other ideas of craziness during this time. In 1890, The Ladies’ World magazine suggested its readers stage a crazy tea party. Mismatched invitations were to be mailed to guests. The hostess’s house was to be decorated with crazy quilts, pictures hung upside down, and lamps topped with shades of various colors and sizes. The menu included baked beans with currant jelly and hot, salted lemonade. Ringing a bell every five minutes would signal the guests they must end their topic of conversation and begin a new one. 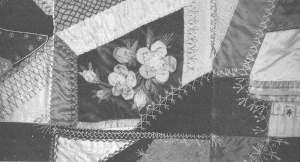 Close-up of a sampler Crazy Quilt shows fine detailed embroidery and roses made of silk. Symbolic motifs on crazy quilts were common and roses stood for love.

Like any other types of quilts, crazy quilts were often made as gifts or to mark a special occasion such as a wedding. Many were exquisitely embroidered with flowers, names, and pictures that held personal symbolic meaning.

By the early 1900s the craziness fad had ended: crazy quilts were out and the more traditional cotton patchwork quilt was back in style . . . and quilting was still in the hearts of many women. One woman, Clemmie Pugh, made over 400 patchwork quilts since 1900, and gave most of them away: “I always kept a quilt in hand, and then when I’d set down to rest, I’d work on the quilt. My husband said I gave a good living away, but I never lost anything by giving folks something.”

Aunt Jane of Kentucky, a woman who made many quilts, once gave a poignant reason for her love of quilting: “. . . when I’m dead and gone there ain’t anybody goin’ to think o’ the floors I’ve swept, and the tables I’ve scrubbed, and the old clothes I’ve patched . . . but when one of my grandchildren sees one o’ these quilts, they’ll think about Aunt Jane, and wherever I am, I’ll know I ain’t forgotten.”

Although quilts are timeless treasures of art, never meant to be disposable or forgotten, many have been lost or reduced to the scraps from which they were made. Fortunately, there have always been quilt lovers whose devoted interest in quilts has helped save many from the ravages of time.

The quilts that remain help light the dark corners of women’s history, providing a remembrance of their pride and passion. For gazing at a quilt is like reading a history book. Its needlework contains words of wisdom, imagination, philosophy, religion, realism, joy, sorrow, life, death, friendship, and love. And if we could read between the tiny stitches, what stories they would tell.