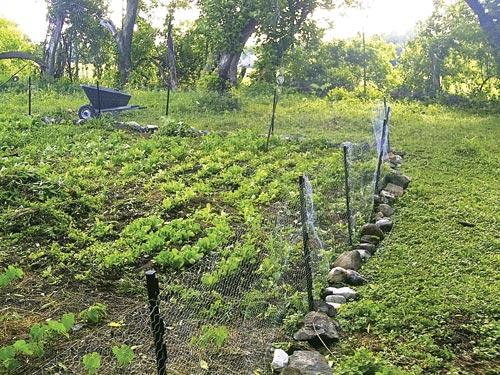 The cycle never ends: As soon as one garden pest is dealt with, another takes its place. Last year, I planted a 150-square-foot area of beans, and by the time I got the woodchuck infestation under control, I only had three plants left.

The last wave of woodchucks was unforgettable. Every morning I lost four or more rows of beans. I tried setting traps, using scent deterrents, and everything else I could think to try. Nothing worked. One morning, I looked out the window and saw a group of five woodchucks. Each was walking down a row of beans, eating one plant after another, finishing off the last of the bean plants. They were so busy gorging themselves, they didn’t realize I had stepped out and was taking aim. I shot three of them and the two survivors were never seen in the garden again. The raiders were gone, but so were my bean plants.

This last spring, I planted an area four times the size of the previous year’s gardens. After spending so much time getting the gardens planted, I was anticipating the bounty I would harvest.

Then a new population of woodchucks moved in. I located four different families of woodchucks in four different burrows about 200 yards apart. Every couple of days, my lettuce, beets, and spinach would be eaten back to the ground. Then the beans came up and the woodchucks started to eat every leaf, leaving me with bare nubs of bean plants that just shriveled up and died. It didn’t seem to matter how many woodchucks I trapped or shot — nothing seemed to stop them.

Determined not to lose another bean plant, I set about woodchuck-proofing the garden. I bought all the 4×50-foot rolls of poultry netting I could find and some easy fence posts that use an iron spike to set in the ground. Woodchucks are good climbers and expert diggers, but fortunately they are not too smart. I set the fence posts around the outside of the garden, pressing the spikes into the ground between the rocks under the soil where I could find a large enough gap. I rolled out the poultry netting so that a 12-inch section sat on the ground extending outward. The netting was attached to the posts, except for the top six inches. I then anchored the lip of netting to the ground with rocks. Woodchucks are not smart enough to try tunneling under the lip, so my woodchucks kept trying to find a weak point at the base of the fence, only to be met with poultry netting. When they could not find a way under the fence, they attempted to climb over it. Every time they climbed up, that six-inch loose section would roll back and the would-be raider dropped to the ground. (I watched one of them repeat the attempt a dozen times.) The fence was only three feet high, so I could easily step over it, removing the need for a gate. There were no weak points for the woodchucks to exploit.

Despite being unable to find a way in, the woodchucks didn’t stop trying. I started leaving unbaited cage traps along the fence. I figured that the woodchucks would keep walking around the fence looking for a way in, and figured that the cage opening would look like a gap in the fence. My theory proved correct; every couple of days after I started setting an unbaited trap along the fence, I found a woodchuck sitting in it, trapped. After about three weeks I stopped finding woodchucks in the traps. After the fence was up, the lettuce, spinach, and beets bounced back. The beans had been fenced off before there was too much damage, so for the rest of the year, I enjoyed a bushel of beans every two days.