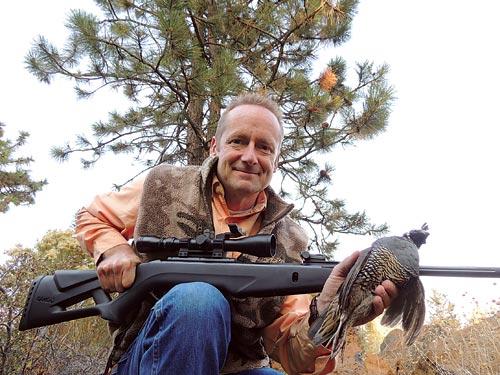 The peacock. Here in the states, he is a designer bird, a decorative element that lends grace to any estate. But the trouble with peacocks is that when there are two, there are going to be more. 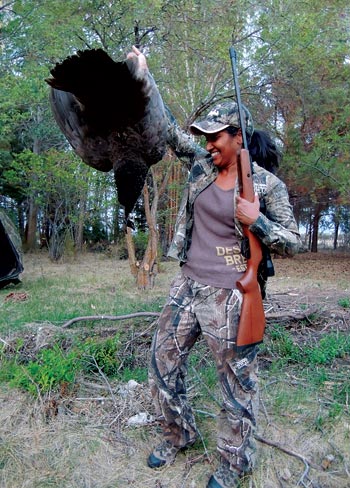 Tami Young admires the feral peafowl she took with a Crossman Optimus air rifle on an evening hunt outside city limits.

When I talked to the owner of a place overrun by the critters, she said they perched on rooftops and cars, left trails of excrement, and menaced her guests.

“I want you to kill two males and two females,” she said. “We might have you come back and take some more.”

I called a friend of mine, Tami, an enthusiastic turkey hunter. Since she had been born in the country where the peacock hails from, I figured that would give us an edge.

“Here’s the deal,” I told her. “We have to use air guns so we don’t scare the neighbors.”

Over the years, I have employed CO2 revolvers, spring air, variable-pump, and break-action rifles to defend home and camp against starlings, sparrows, rodents, and snakes, as well as to put quail and doves in the frying pan.

When one well-placed shot is called for, when it must be delivered at close range, perhaps in a neighborhood or an industrial area, when it must not be noticed or commented upon  that’s when the air gun comes into its own.

With air guns, there is little margin for error. If there is such a thing as knockdown power, most air guns don’t have it. Instead, the tiny lead projectile disrupts brain function or destroys a vital organ, causing a quick death for the target critter.

Because the targets are small  the vital areas on a squirrel are about one inch in diameter  the effective range should be considered about 40 yards. Although the projectile is dangerous at hundreds of yards, most air gun shots at varmints, as well as potential protein, are taken between 15 and 35 yards.

The biggest segment of the air gun market is in the $50 to $100 range, but there are also buyers for air guns that start in the $600 to $700 range and handle like the finest firearms.

Never before has the consumer had more options: Beeman, Gamo, RWS, Crosman, Benjamin, and other companies now make spring piston, gas spring, pneumatic, and pre-charged pneumatic (PCP) rifles that shoot up to 1,600 feet per second when paired with premium pellets.

If, on the other hand, the pest in question is furred, a .22 caliber brings the energy required to put woodchucks, rockchucks, feral cats, jackrabbits, possums, and other small-game animals down for good.

Crosman’s Optimus Break Barrel air rifle is offered in .177 and .22 caliber and features an ambidextrous hardwood stock. The customer can choose between fiber optic sights or a CenterPoint 4×32 scope. With alloy pellets, the Optimus achieves a muzzle velocity of up to 1,200 feet per second (fps). With the scope, it retails for $149.99.

Gamo’s futuristic Whisper VH comes with a thumb-hole stock and a 3-9×40 air gun scope with a regular duplex crosshair. In addition to the optics, the noise-dampened Whisper VH comes with a red laser and light designed to be employed with the one-piece scope mount. Designed for hunting at all hours, the scope crosshair can be set at one distance and the laser set for a second distance. At night, the laser and the scope can be employed simultaneously  when you can’t see the crosshair, you can still see the red dot superimposed on the target. Suggested retail is $369.95. 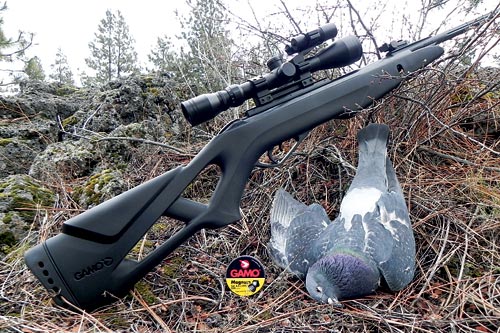 Today’s air rifles provide the power to deal with pests at longer range.

The sophisticated .25 caliber PCP Benjamin Marauder air rifle is a powerhouse of hushed accuracy, reaching velocities greater than 850 fps and 45 ft-lbs of kinetic energy per shot. An indexing, eight-round clip allows for fast follow-up shots. The Marauder offers a dual fuel option for use with either compressed air or CO2. It has a hardwood stock with ambidextrous raised comb and custom checkering. The built-in pressure gauge displays the gun’s charge. If you use this gun to shoot rats in the barn, you will blow holes through the walls. 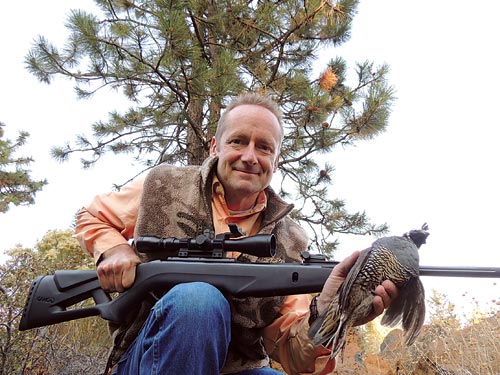 An air rifle is a good option when a well-placed head shot is called for. Dinner is served on the first day of quail season.

For pest control and varmints, the nature of the hunt calls for precise shot placement. Since many varmints are active after dark, a weapon-mounted flashlight and/or a laser can make the difference.

Attached to the barrel or mounted atop a rifle scope, a lightweight LED torch can light up a target at the touch of a switch. A laser improves the ability to put a pellet on target in low light conditions.

Even at close range, a scope makes the air rifle deadly accurate. But not every scope should be paired with an air rifle. The dual forced recoil  fore and aft  of a spring piston gun can pop lenses out of a scope. Look for a scope rated for air guns.

Air rifles don’t make much noise. With the exception of the big bores, the lightweight projectile does not carry enough momentum to be dangerous beyond 600 yards. A firing range and backstop can be built in a basement or in the garage without putting the family at risk. 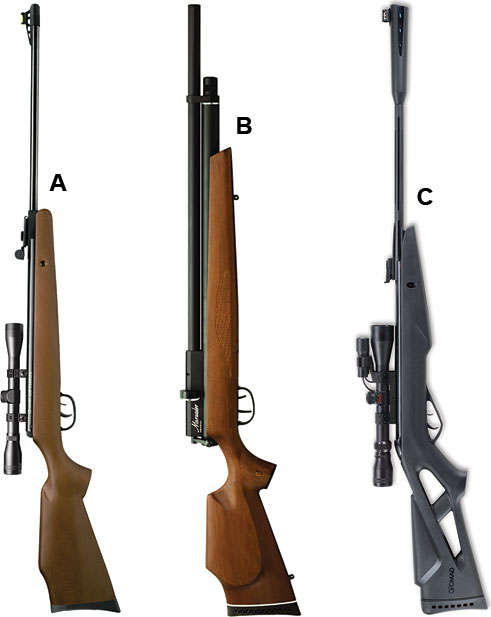 A: The Crosman Optimus is offered in .177 and .22 caliber, and features an ambidextrous, hardwood stock. The customer can choose between fiber optic sights or a CenterPoint 4×32 scope.
B: The Benjamin Marauder offers a dual fuel option for use with either compressed air or CO2.
C: The noise-dampened Whisper VH comes with a scope, red laser, and a light designed to be employed with the one-piece scope mount.

Out on the farm

We set up a blind at the edge of the trees and waited for the birds to come within range. Tami used my .177 Crosman Optimus with copper pellets while I relied on the .177 GAMO Whisper and the 25-caliber Benjamin Marauder.

Birds wandered in and out of range and we started by taking head shots which proved to be less than effective. Even at 1,000 fps, our pellets appeared to bounce off their heads. Next we aimed for the top of the neck, just below the head, an area no bigger than a dime. Soon we had our peacocks on the ground, headed for the oven. And the neighbors none the wiser.

Out on the farm, in camp, or on the edge of city limits, an air gun may be the best choice to take out starlings, pigeons, rats, ground squirrels, snakes, raccoons, and even coyotes without upsetting the neighbors.

There are more options in the marketplace than ever. It’s an air power arms race, where the well-armed consumer is the winner.

Not all pellets are created equal. A high-quality projectile will enhance the accuracy of a mediocre gun, while a low-quality pill will downgrade its performance.

For practice, use a wadcutter design. Opt for a tipped, lightweight, high-velocity round when hunting furred or feathered varmints.
Hyper-velocity pellets like the PBA (Performance Ballistic Ammo) Armor Impact, Bullet, Raptor and Rocket projectiles, and the RWS Hyper Velocity line allow air gunners to extract the utmost from their guns with better terminal performance than ever before.

The most common calibers are .177 and .22 and can be found in hardware and sporting goods stores. To feed the guns of the less popular calibers, a hunter should try several different styles of ammunition, pick one that performs, and buy a lifetime supply.

For the would-be airgunner with a feathered pest problem and a small closet, one good option is the Benjamin Trail NP Break Barrel Pistol. It comes in .177 caliber with an overall length of 16 inches. Rated for 625 fps with alloy pellets, the gun has a rear target sight with a fiber optic front sight.

For target shooting and small game

A lot of big game hunters want the flexibility to practice their shots on targets in the privacy of a garage or a basement. GAMO’s Hunter Extreme 22, when topped with a 3-9X50 scope is a good choice for a rifle that can dual duty as a trainer for big game and to put down furred and feathered pests.

A critter gitter with punch

Coyotes, ‘coons, and crows can do a lot of damage in a small poultry operation. To keep things quiet and to keep the critters at bay, employ the Benjamin Marauder, which is a .25-caliber rifle that can be powered by compressed air or CO2.