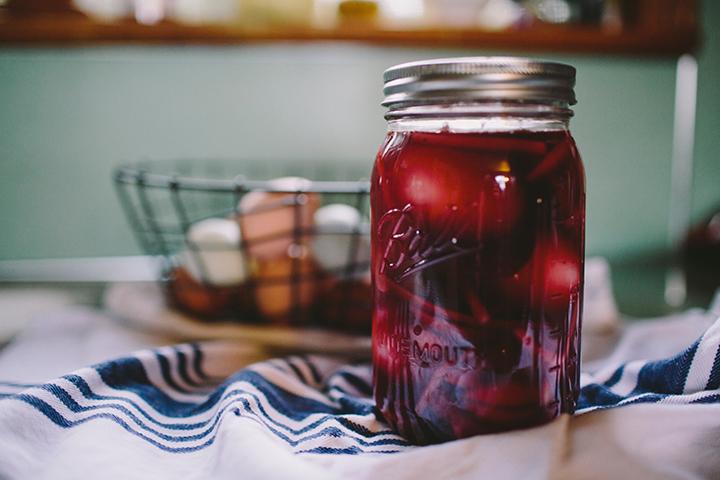 The ancient art of brining pickles produces a product similar to the expensive “deli-style” pickles in the supermarket. The process is not difficult; however, older recipes call for “pecks” and “bushels” of cucumbers that today’s home gardeners don’t have space or time to grow.

For smaller amounts of produce, try the following recipe.

This method of brining or “fermenting” may also be used with other vegetablescauliflower, snap beans, peppers, and brussels sprouts, as well as others. The quart method works especially well with okra because it goes limp quickly and has to be picked almost daily. It is best to put the date on the jar with a small piece of tape if several jars are being brined within days of one another.

The cucumbers: Use firm 4 to 6-inch pickling cucumbers picked within the last three days. The Texas Cooperative Extension Agency recommends you do not use “burpless” cucumbers because they may soften. Good results have been obtained, however, from Japanese cucumbers such as “Suyo Long” if they are cut into 4-inch chunks with the ends removed. Do not use supermarket cucumbers; they have been waxed to keep them fresh, and the brine will not penetrate the wax. Occasionally, supermarkets will carry pickling cucumbers, and they will be labeled as such. Farmer’s markets are a good source.

The ingredients: Use pickling salt. Table salt has fillers to prevent caking, and kosher salt, while pure, is a different granulation size and won’t measure out the same.

Regular 50-grain (or 5% acidity) vinegar may be used, but tastier results will be obtained with white wine vinegar. Red wine vinegar adds flavor, but pickles will be darker.

The Extension Agency recommends soft water for brining pickles. If not available, distilled water or water boiled for 15 minutes may be substituted. This can be a matter for experimentation later on. Shallow well water that tastes rank has been known to make great pickles.

Older recipes call for fresh dill, but this is not always easy to obtain. Dried dill seed from the supermarket is a good substitute. If fresh dill is used, use the seed head, stalk, and leavesin other words, everything but the dirt.

Adding peeled shallots is highly recommended; they add special flavor and taste wonderful chopped and added to potato salad later. Shallots, with their delicate onion and garlic flavor, are usually available in supermarkets next to other root crops in the vegetable section. If a hot and spicy zest is desired, add dried red peppers.

The equipment: Do not use zinc, copper, brass, galvanized metal, or iron cookware or utensils; they may react to the vinegar and cause an off-taste. Bowls can be plastic, stainless steel, glass, or ceramic. Pots and pans should be stainless steel, heatproof glass, or hard-anodized aluminum.

For brining: Use a stone crock, glass jars, or food-grade plastic containers.

Getting started: Wash cucumbers thoroughly in cold water to remove soil. Cut 1/16 of an inch off the bottom to remove the blossom end, which can cause softening. Put the cucumbers in a colander to drain.

Mix ¾ cup salt, ½ cup vinegar, and enough water to make one gallon. (For smaller amountsmix 3 Tbsp. of salt with 2-3 Tbsp. of vinegar and add water to make one quart.) Stir until it goes cloudy and then clears again to make sure all the salt is dissolved.

If grape leaves are available, use them to line the bottom of the brining container. Grape leaves will make the cucumbers firmer but are not absolutely necessary. Add a layer of cucumbers, a layer of spices, a few shallots, and continue until you run out or the container is almost full. The measurements below are a guideline, more or less may be added to suit individual preference.

If using grape leaves, add another layer on top. Pour brining liquid over the cucumbers until they are covered.

The most important thing is to keep the cucumbers submerged in liquid at all times. The easiest way to do this is to use food-grade plastic bags as weights. Fill one or more bags, depending on the size of the container used, with brining liquid. (Use brine instead of water in case the bags accidentally leak.) Leftover brine can be saved to use later. Place the bags on top of the cucumbers and make sure the cucumbers are fully submerged in the liquid. A clean plate with a water-filled jar on top can be used to keep the cucumbers submerged, as well. Cover with a towel and place the container of cucumbers in a cool place out of direct sunlight. The pantry floor is usually ideal, because the fermenting process can cause the brine to bubble and flow out of the container. Optimum temperature is between 70 to 75° F. They should take about three to four weeks to cure. In higher temperatures, they will cure faster, but they do run the risk of being softer. Lower temperatures will cause them to cure slower.

Check the container several times a week and skim off any scum that forms. It is impossible to get it all; just remove most of it. When using bags, rinse the bags off and pat dry with a paper towel before replacing them. If the plastic bag covers the opening sufficiently, scum may not even form. Discard the cucumbers if they become soft, slimy, or develop a disagreeable odor, and try again.

The pickles are ready when they are olive green throughout. At this point, they can be canned in the same manner as regular pickles and will last up to a year in the pantry, retaining that unique brined taste. However, for the best flavor and crunch, drain the brine from the pickles and boil it for 15 minutes. Rinse the pickles, let them drain, then place them in a clean container. More spices can be added. Remove any scum that has formed on the heated brine. Let the brine cool then pour over the pickles and place in the refrigerator. Keep them refrigerated until eaten. Perfecto!