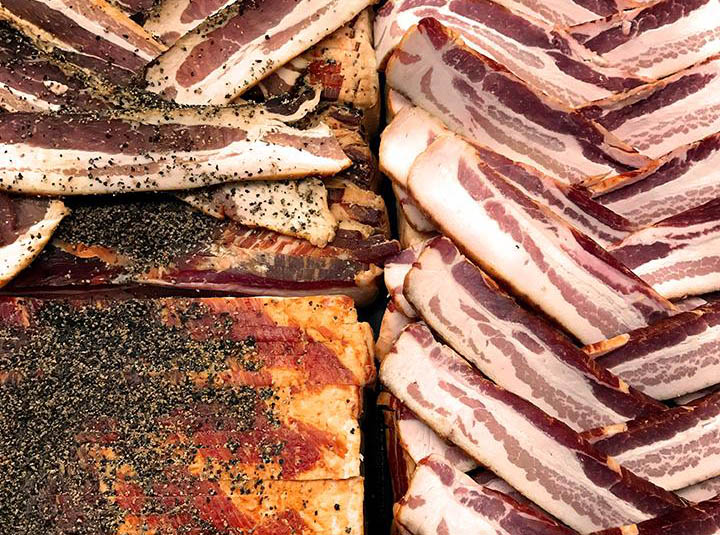 Last year, our family processed a hog for the first time. We made roasts, pork chops, bacon, Italian sausage, breakfast link sausages, and hams. All of the results were quite tasty, but there was one thing that, for our family, just wasn’t worth the effort: Ham.

Now, I know that isn’t going to be the case for a lot of people, but we aren’t big on ham around here. We’ll eat sliced deli ham on sandwiches, but I sure don’t want to cook a whole ham for making into sandwich meat. Not to mention the fact that, out of all the products we processed from the pig, the ham was the most time consuming.

When butchering time rolled around this fall, I intended on making all the hams into fresh roasts, instead of curing and smoking them. After all, what else could you do with them? Then a friend told me about buckboard bacon. Traditional bacon is made from pork bellies. Buckboard bacon uses other cuts of the hog, but is cured and smoked just like bacon.

Buckboard bacon is every bit as easy to make as regular bacon. As we processed the pig, I set aside the ham meat according to its intended use. Once I had enough meat for the buckboard bacon, I cut it into 2-inch-thick slabs, so that it looked somewhat like the pork belly slabs.

Once the meat was weighed, I made the curing mix  ¼ cup canning and pickling (non-iodized) salt, 1 cup of sugar, ½ cup table mustard (not powdered), and 1 teaspoon ground black pepper for every 5 pounds of bacon. I mixed it well, then rubbed it into the meat, making sure it got worked into any crevices.

It might seem odd that the curing mix contained mustard. I know it made me nervous. I like mustard on sandwiches, but did I want mustard-flavored bacon? Definitely not. However, the finished product doesn’t even hint of mustard, so you can use it with confidence.

I made my own curing mix but you don’t have to. I checked out the hunting supplies section of our local farm store and found a variety of packaged cures to choose from. If you can’t find something you like locally, there are countless choices online. I also found many curing mix recipes online.

I layered the slabs in my plastic dish pans and covered them with plastic wrap. I had three pans full, so I stacked them. That forced the meat down, so the curing solution pressed into it.

I’m fortunate enough to have a root cellar that stays between freezing and 40 degrees, so I could park the pans in there to cure for 10 days. If you don’t have a root cellar, a refrigerator works just as well, as long as you keep the containers sealed so they don’t absorb any flavor from other foods in the fridge.

I turned the meat once a day, re-layering so the top pieces rotated to the bottom. I also rotated the order of the stacked dish pans. The cure draws the liquid out of the meat, so it is soon sitting in its own juices. Rotating the stacks makes sure all the meat gets completely soaked in the cure.

On the tenth day, I brought the pans inside. I rinsed the meat, making sure to wash out any crevices. Then I put it back in the dish pans and filled them with cold water to soak.

I soaked it for an hour, then fried a sample piece to test for saltiness. Wow! It tasted like bacon, without the fat and with just a hint of pork chop taste. It was so good, my husband voted to not smoke it. Call me lazy, but I agreed. Why tamper with perfection, I thought. Perhaps we’ll smoke it next time.

I put the slabs in the freezer until they were chilled (but not frozen) and then brought them out for slicing. Chilling the meat, almost to the point of freezing, makes it stiffer and easier to slice. I wanted to slice it thin, like bacon, so that was important.

Since buckboard bacon isn’t from pork bellies, some of the slices weren’t exactly bacon strip shaped. Actually, very few of the pieces came out looking like bacon strips, despite my attempt to cut the meat into slabs. That doesn’t affect the taste, though. I sliced all of it, in various shapes, and then realized I had another challenge. Where was I going to put it all? Our freezer was already bursting at the seams.

I wrapped and stuffed what I could into the nooks and crannies in the freezer. About half of the bacon didn’t fit. Time for Plan B.

Buckboard bacon doesn’t have much fat on it, compared to traditional bacon, so I figured it would dehydrate well. I spread the meat on the dehydrator trays. Ten hours later, I had some delicious “bacon jerky.” Or something like that. It’s great to eat dried, that was for sure. It reconstitutes and fries up for breakfast well too.

The dehydrated bacon keeps without refrigeration. That meant I could send some samples to my sons in California and Florida. Imagine their surprise when I told them I had just shipped them some bacon from our pig  in the mail!

Because the buckboard bacon has very little fat, you have to add a bit of fat to the pan when frying it, whether dehydrated/reconstituted or frozen. Even so, there’s less fat than regular bacon  good news if you’re trying to cut back. It also cooks much faster than bacon so keep a close watch on it while you’re cooking it. Once the bacon is cooked, you can still scramble your eggs in the drippings, for a tasty breakfast.

So far, we’ve eaten the buckboard bacon as jerky, fried like regular bacon, and boiled in a pot of beans. The flavor is great and we’ve never been disappointed. The reconstituted or freshly fried bacon is great for sandwiches  much better than ham, if you ask me!