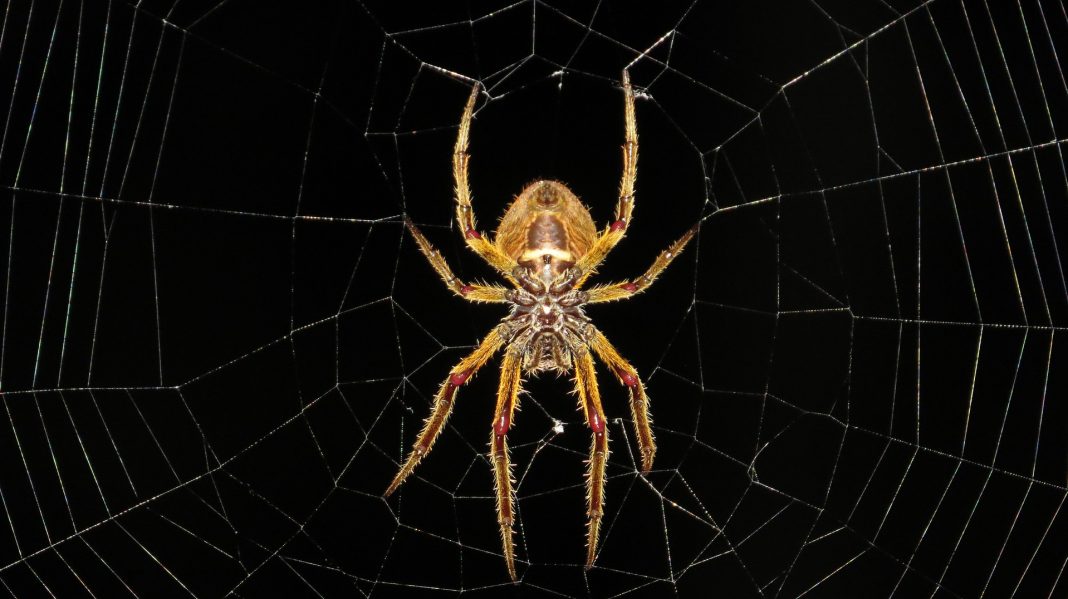 In the last issue of Backwoods Home, we discussed some of the hazards encountered by the homesteading gardener. Burns, cuts, abrasions, allergic reactions, and certain insect stings are, however, just some of the issues that the serious horticulturist can expect to deal with. In this issue, we will further discuss various insects and related ne’er-do-wells that can complicate your efforts to establish a successful garden. 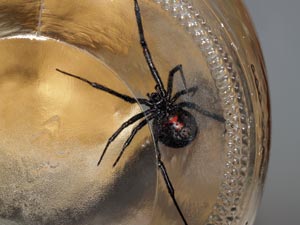 Most spider bites cause nothing more than pain, but the Black widow and brown recluse inject a potent venom which can cause serious symptoms and death.

Although large spiders, such as tarantulas, cause painful bites, most spider bites don’t even break the skin. In temperate climates, two spiders are to be especially feared: the black widow and the brown recluse.

The black widow spider is about ½ inch long and is active mostly at night. Southern black widows have a red hourglass pattern on their backs, but other sub-species don’t. Although its bite has very potent venom damaging to the nervous system, the effects on each individual are quite variable. Severe pain at the site is usually the first symptom soon after the bite. Following this, you might see:

Each person will present with a variable degree of the above symptoms. The very young and the elderly are more seriously affected than most. In your exam, you can expect rises in both heart rate and blood pressure.

As its name implies, the brown recluse spider is brown and has legs about an inch long. Unlike most spiders, it only has six eyes instead of eight, but they are so small it is difficult to identify them from this characteristic.

Victims of brown recluse bites report them to be painless at first, but then may experience these symptoms:

The venom of the brown recluse is thought to be more potent than a rattlesnake’s, although much less is injected in its bite. Substances in the venom disrupt soft tissue, which leads to local breakdown of blood vessels, skin, and fat. This process, seen in severe cases, leads to “necrosis,” or death of tissues immediately surrounding the bite. Areas affected may be extensive.

As a result, the human body activates its immune response and can go haywire, destroying red blood cells, kidneys, and the ability of blood to clot appropriately. These effects can lead to coma and eventually death. Almost all deaths from brown recluse bites are recorded in children.

The treatment for spider bites includes:

Suction devices are generally ineffective in removing venom from wounds. Tourniquets are also not recommended and may be dangerous. Although antidotes known as “antivenins” (discussed in the section on snakebite) exist and may be life-saving for venomous spider and scorpion stings, these may be scarce in remote settings or austere environments.

Most cases that are not severe will subside over the course of a few days, but the sickest patients will be nearly untreatable without the antivenin.

Although ticks are commonly thought of as insects, they are actually arachnids like scorpions and spiders. The American dog tick carries pathogens for Rocky Mountain spotted fever, and the blacklegged tick, also known as the deer tick, carries the microscopic parasite that’s responsible for Lyme disease. Some tick-borne illness is similar to influenza with regards to symptoms; it is often missed by the physician. Lyme disease sometimes has a tell-tale rash, but other tick-related diseases may not.

Most Lyme disease is caused by the larval or juvenile stages of the deer tick. These are sometimes tough to spot because they’re not much bigger than a pinhead. Each larval stage feeds only once and very slowly, usually over several days. This gives the tick parasites plenty of time to get into your bloodstream. The larval ticks are most active in summer. Although most common in the Northeast, they seem to be making their way further West every year.

Ticks don’t jump like fleas do; they don’t fly like, well, flies, and they don’t drop from trees like spiders. The larvae like to live in leaf litter, and they latch onto your lower leg as you pass by. Adults live in shrubs along game trails (hence the name Deer Tick) and seem to transmit disease less often. In inhabited areas, you might find them in woodpiles near gardens (especially in shade).

Many people don’t think to protect themselves outdoors from exposure to ticks and other things like poison ivy, and many wind up being sorry they didn’t. If you’re going to spend the day puttering in the garden, you should be taking some precautions:

Good bug repellent is going to improve your chances of avoiding bites. Citronella can be found naturally in some areas and is related to plants like lemon grass; just rub the leaves on your skin. Soybean oil and oil of eucalyptus will also work. Consider including these in your medicinal garden if your climate allows it.

It is important to know that your risk of Lyme disease or other tick-spread illness increases the longer it feeds on you. The good news is that there is generally no transmission of disease in the first 24 hours. After 48 hours, though, you have the highest chance of infection, so it pays to remove the tick as soon as possible. Ticks sometimes don’t latch onto your skin for a few hours, so showering or bathing after a gardening session may simply wash them off. This is where good hygiene pays off.

If you find a tick feeding on you, remove it as soon as possible. To remove a tick, take the finest set of tweezers you have and try to grab the tick as close to your skin as you can. Pull the tick straight up; this will give you the best chance of removing it intact. If removed at an angle, the mouthparts sometimes remain in the skin, which might cause an inflammation at the site of the bite. Fortunately, it won’t increase your chances of getting Lyme disease.

Afterwards, disinfect the area with Betadine (povidone-iodine solution) or apply triple antibiotic ointment. I’m sure you’ve heard about other methods of tick removal, such as smothering it with petroleum jelly or lighting it on fire. No method, however, is more effective than pulling it out with tweezers.

Luckily, only about 20% of deer ticks carry the Lyme disease or other parasite. A rash that appears like a bulls-eye occurs in about half of patients. If you get a rash along with flu-like symptoms that are resistant to medicines, you’ll need further treatment.

Oral antibiotics will be useful to treat early stages. Amoxicillin (500 mg 3x/day for 14 days) or Doxycycline (100mg 2x/day for 14 days) should work to treat the illness. These can be obtained without a prescription in certain veterinary medications (a topic of a future article).

Most scorpions are harmless; in the United States, only the bark scorpion of the Southwest desert has toxins that can cause severe symptoms. In other areas of the world, however, a scorpion sting may be lethal.

Some scorpions may reach several inches long; they have eight legs and a set of pincers, and inject venom through their “tail.” The nervous system is most often affected. Children are most at risk.

Symptoms you may see in victims of scorpion stings may be:

Unlike the stings of bees or wasps, mosquito bites are common vectors of various diseases. One of the most notorious diseases caused by mosquito vectors is malaria. Worldwide, one to three million deaths a year are attributed to complication from this illness.

Malaria is caused by a microscopic organism called a protozoan. When mosquitoes get a meal by biting you, they inject these microbes into your system. Once in the body, they colonize your liver. From there, they go to your blood cells and other organs. By the way, only female mosquitoes bite humans. Anaphylactic allergic reactions, not uncommonly seen with bee stings, are rarely an issue with mosquitoes.

Symptoms of malaria appear flu-like, and classically present as periodic chills, fever, and sweats. The patient becomes anemic as more blood cells are damaged by the protozoa. With times, periods between episodes become shorter and permanent organ damage may occur.

Diagnosis of malaria cannot be confirmed without a microscope, but anyone experiencing relapsing fevers with severe chills and sweating should be considered candidates for treatment. The medications, among others, used for malaria are Chloroquine, Quinine, and Quinidine. Sometimes, an antibiotic such as Doxycycline or Clindamycin is used in combination with the above.

Other mosquito-borne diseases include Yellow Fever, Dengue Fever, and West Nile Virus. The fewer mosquitoes near your retreat, the less likely you will fall victim to one of these diseases. You can decrease the population of mosquitoes in your area and improve the likelihood of preventing illness by:

If you are reluctant to use chemical repellents, you may consider natural remedies. Plants that contain Citronella may be rubbed on your skin to discourage bites. Lemon balm, despite having a fragrance similar to citronella, does not have the same bug-repelling properties. Despite its name, lemon balm is actually a member of the mint family.

When you use natural substances to repel insects, re-apply frequently and feel free to combine them as needed. Besides Citronella oil, you could use:

The above are medical risks to anyone that is responsible for the family garden. Always be mindful of protecting your hands by wearing a good pair of gloves while cultivating your plants. As well, consider adding some of the herbs discussed in this article to your medicinal garden. In this manner, you can have a renewable source of natural remedies that may be helpful in dealing with these issues.

Joe and Amy Alton are the authors of the #1 Amazon Bestseller The Doom and Bloom Survival Medicine Handbook. Visit their website at www.doomandbloom.net