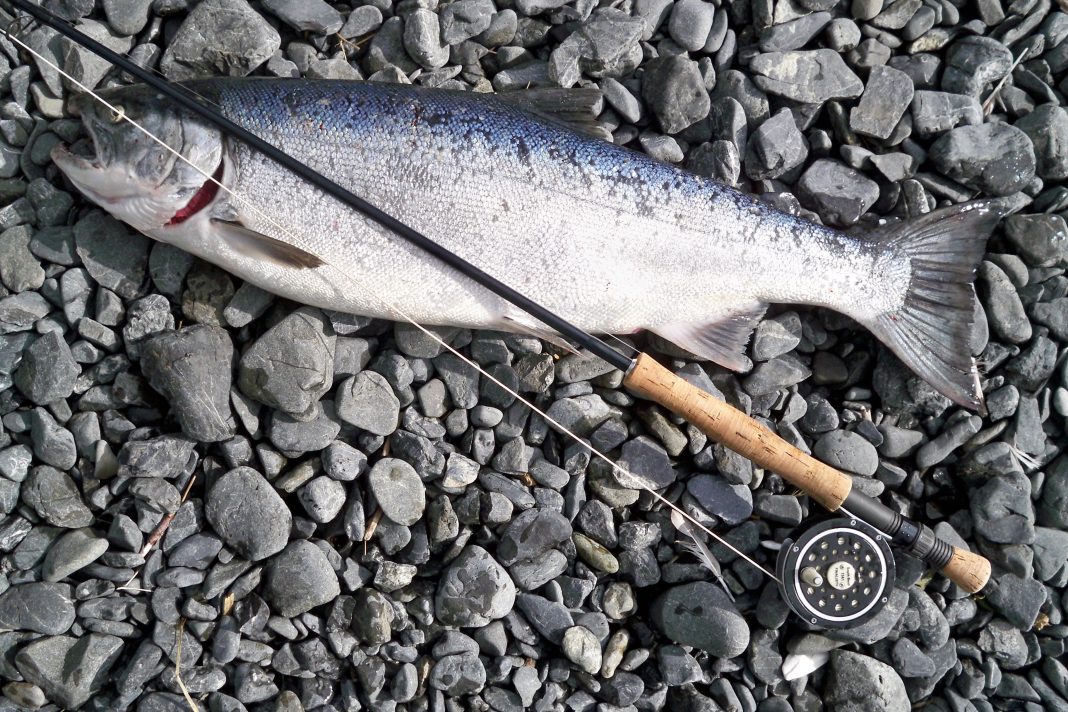 With most of our planet underwater, fish have been a part of the human diet since before recorded history. Almost any permanent body of water can be presumed to support fish, and virtually all species are edible.

The challenge has always been getting fish from the water so they can be rendered into food. In a real-life backwoods scenario where fish might provide most or all of the calories a person ingests, you need a technique that produces maximum results with minimal effort. Pan-sized fish are most numerous and easily caught, but catching these morsels one at a time on a conventional rod and reel may be too slow to keep in step with caloric demands, especially for a group.

The trigger line, taught to me by my Ojibwa grandfather, Amos Wasageshik, when I was a boy, is one of the simplest and most effective methods of harvesting fish for survival. Part spring snare, part fishing pole, a trigger line automatically sets its hook in a fish’s mouth when it takes the bait. Once hooked, the fish remains at the end of the line, alive but securely caught, until retrieved. Even better, trigger lines will catch and hold fish while you spend valuable energy and time doing other things.

The working principles of a trigger line are simple. Required materials for a single set are one fishhook, one or two split-shot sinkers, about ten feet of at least six-pound test monofilament fishing line, a springy green sapling, and a stout stake chopped from dead wood. Since more sets usually equals more fish, the fishing kit that resides permanently in my own daypack contains a fifty-yard spool of fishing line, two dozen assorted sinkers, and one hundred assorted fishhooks safely contained inside a capped plastic bottle.

The stake functions as an anchor for the springy pole, and is best made from dry dead wood because it can be notched more cleanly with a knife than green wood. An ideal candidate will be about ten inches long by two inches in diameter. Sharpen the end that will be pushed into the ground, then cut a sharp-edged notch (see illustration) about halfway through one side about two inches below the top end. Drill or pound the stake to a depth of about six inches into the edge of a streambank. The notch should always point downstream, or away from shore in the case of ponds and lakes, because those are the directions a biting fish will probably take the bait.

Next rig the pole, which should be made from a springy green sapling (usually common on streambanks), about three feet long and with a base of about one inch. Tie on the line about two inches above the pole’s narrow end with a fisherman’s slipknot, attach hook and sinkers, then drive the butt end of the pole firmly into the ground about two feet inshore from the stake. Next, bend the pole downward and wedge it into the stake’s notch. The idea is to restrain the pole under tension, but not so securely that it won’t slip free with a light tug on the line. Techniques for achieving a perfect fit include slightly flattening the upper side of the pole with a knife, deepening the notch, or angling the anchor stake.

When an ideal fit is achieved, bait the hook with a worm, grasshopper, or even a chunk of summer sausage, and toss it away from shore, ensuring that there is as little slack in the line as possible. A fish tugging against the baited hook will pull the pole from its restraining notch, causing it to spring forcefully in a direction opposite the fish, and driving the hook’s barbed point deep into flesh in the fish’s mouth. The fish will remain there, tethered to shore, until retrieved or released by the angler.

Tips for making the trigger line work more efficiently include knowing what types of fish are likely to be caught, and then setting the trap accordingly. Northern pike spawn up rivers in May, and their sharp teeth require that a steel leader be used; bullheads and catfish forage close to the bottom and tend to tug gently against a hook; bass and brook trout hit a bait violently. Long-shank hooks are more easily removed from your catch’s mouth, and smaller hooks can catch big fish, but large hooks will be stripped of bait by fish too small to swallow them.

Some type of bait is always available where there are fish. Moist logs and rocks along shorelines can be rolled over to reveal earthworms, grubs inhabit rotting stumps, and any insect that can be skewered onto a hook is bait. In winter, freshwater clams often come close to shore, and pieces of their flesh have proved irresistible to most types of fish. Likewise, the first small fish caught can be cut up to bait several trigger lines, because nearly all fish are cannibalistic.

Good fishing baits are often found in backpacks and daypacks. A raisin on a hook has caught most freshwater species, while bits of summer sausage are great for more carnivorous species, like pike and catfish. Spawning trout have been caught on pieces of colored yarn floated on the surface, while suckers, bullheads, and turtles are attracted to short lengths of shoelace that are saturated with animal fat (bacon grease is best).

Be warned that trigger lines may be illegal in some places, except under actual survival conditions. Like many too-effective hunting and fishing methods, unregulated use of trigger lines could deplete fish populations, so this trap should be used sparingly and responsibly. Like any tool, the ultimate responsibility for how a trigger line is employed must lie with the user.

Len McDougall is the author of The Encyclopedia of Tracks & Scats, The Log Cabin: An Adventure in Self Reliance, Individualism, and Cabin Building, The Field & Stream Wilderness Survival Handbook, The Complete Tracker, Practical Outdoor Projects, Practical Outdoor Survival, The Snowshoe Handbook, The Outdoors Almanac, and  Made for the Outdoors. He is also a Wilderness Guide/Survival Instructor for Timberwolf Wilderness Adventures in Paradise, Michigan.