Most people don’t know that we’re currently in an ice age and have been for the last 2.58 million years. It’s called the Quaternary Ice Age. Again and again, during the Quaternary, glaciers have grown and covered much of North America, Europe, Asia, and other parts of the world. Called glaciations, these times of expanding ice have lasted tens of thousands of years. But each time they were followed by warm periods, called interglacials, which lasted anywhere from a few thousand to perhaps 20,000 years. During the interglacials, glaciers melted and the ice retreated — only to return, later.

We’ve been in such an interglacial period for the last 12,000 years and we don’t know when it will end. The glaciers could start growing again tomorrow — or not for another 10,000 years. 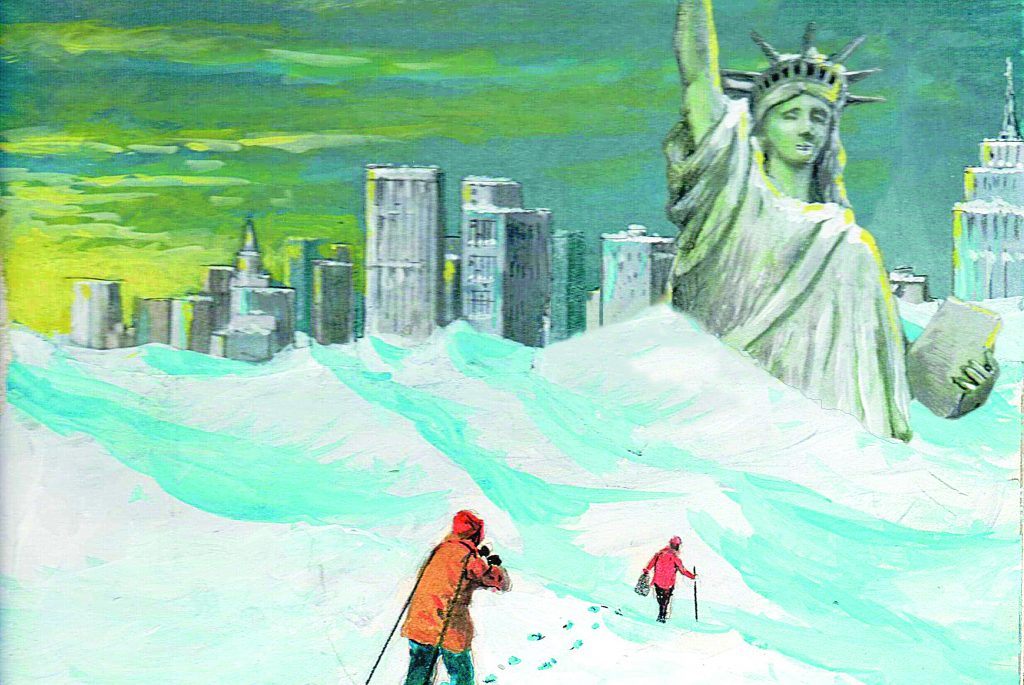 How Bad Can an Ice Age Be?

At the peak of the last glaciation, the average world temperature was about 10º F colder, with some local temperatures 40º F colder than they are today. Ice sheets covered much of North America including about 97 percent of modern-day Canada. Where Detroit and Chicago now stand, the ice was more than a mile thick. At the same time, much of what is now the lower 48 states was either covered with ice, was polar-alpine desert, was taiga (which is a moist subarctic forest), or it was the tundra you find today in the arctic, i.e., mucky soil with mosses, small shrubs, lichens, and permafrost just a few feet down.

If and when the ice advances again, many cities in North America, Europe, and Asia will disappear.

Ice ages have been explained as decreases in the sun’s output, changes in volcanism, perturbation in the earth’s orbit as it goes around the sun, shifts in the tilt of the planet’s axis, changes in the ocean currents, changes in the jet stream, and plate tectonics. Some theories are combinations of two or more of the above along with some theories I probably forgot to mention. The reality is, no one knows what causes them. This isn’t to say that someday someone won’t figure it out.

We haven’t always had ice ages. During the last 2½ billion years, the world has been without ice ages some 80 percent of the time and the earth’s overall climate has generally been warmer than it is today. During those warmer ages there were no glaciers on Greenland or Antarctica and when this ice age ends, Greenland and Antarctica will be ice-free again and, except in high mountains, glaciers will once more disappear.

Scientists have found evidence of about 50 glacial advances and retreats since the Quaternary began and we’re likely to see another glaciation in the future.

The Quaternary Ice Age is only the most recent of at least five ice ages that have occurred in the last 2.5 billion years. The oldest one we know of, the Huronian Ice Age, started about 2.4 billion years ago and lasted some 300 million years. During the Huronian, the earth may have frozen all the way to the equator, or at least close to it. We can’t be sure, but there’s a lot of evidence that it had. That concept has come to be called ‘snowball earth.’ If a snowball earth were to occur again, civilization would almost certainly cease to exist and most of the so-called higher life-forms would become extinct.

The second ice age, the Cryogenian, started about 850 million years ago and lasted about 215 million years. It may also have resulted in a snowball earth.

The Karoo Ice Age started about 360 million years ago and in many ways was like the current ice age in the amount of the earth glaciers covered. But it lasted for 100 million years.

Not to ruin your day, but no one knows how long the current ice age will last, how many glaciation-interglacial cycles it’ll go through, how severe it may get, or if there will be another snowball earth.

Between the years 1300 and 1850, much of the earth experienced what has become known as the Little Ice Age. The Little Ice Age wasn’t an ice age-glaciation, but a period of exceptionally cold weather in which glaciers got larger. Some towns at high elevations were destroyed as mountain glaciers expanded and swept them away.

Prior to the Little Ice Age, there had been a warm period, now called the Medieval Warm Period (MWP). It lasted from about the year 950 to 1250. During the MWP, growing seasons were longer and life was more prosperous than in the Little Ice Age that followed. The MWP was the time of Viking exploration when they fearlessly sailed the Atlantic and settled parts of the west coast of Greenland that were then ice-free. Today, those former settlements are covered with ice and useless for just about any kind of human habitation.

Starting around 1300, grain harvests frequently failed and in Europe the grain harvest didn’t exceed the harvest year of 1300 until the mid-19th century. As a result, food prices soared and stayed high. Lives were shorter than they were in both the years that preceded the Little Ice Age and those that followed because poorly-fed people aren’t as healthy as those with a good diet. It’s even been suggested that the deadliness of the great plagues of this period may be at least partly attributable to the poor health these famines brought on.

Causes of the Little Ice Age

At the end of the 19th century a husband and wife team, Edward and Annie Maunder, did historical research and found there had been a dramatic reduction in the number of sunspots between 1645 and 1715, and those years coincide with part of the Little Ice Age. A reduction in sunspots is associated with a corresponding reduction in solar output. In the 28-year period from 1672 to 1699, fewer than 50 sunspots — total — were observed. Today, astronomers would expect to see 40,000 to 50,000 in the same amount of time. The Maunders proposed that the Little Ice Age was caused by this reduction in solar activity. These periods of reduced solar activity are now called Maunder Minimums, after them.

Evidence from carbon-14 readings indicate 18 solar minimums have occurred in the last 8,000 years. Could one happen again?

There were recent reports that Professor Valentina Zharkova, of Northumbria University (she is both a mathematician and an astrophysicist) and her colleagues claim to have developed a computer program that predicts maximums and minimums in solar activity, specifically the sunspot cycle. She says that around the year 2030 the sun will enter another solar minimum comparable to the solar minimums that occurred in the Little Ice Age.

When she published her results, she didn’t predict an imminent mini ice age, but journalists who got hold of the report did. Many climate change scientists immediately said that new solar minimums “would not trump” anthropogenic global warming. But when she was asked, Zharkova said she thought variations in the sun’s output have more to do with the earth’s temperatures than greenhouse gases. She also said her gut feeling is, if a Maunder Minimum reoccurs, we’ll go back to the temperatures of the Little Ice Age.

Sunspots run on a cycle that spans 10 to 11 years. At the peak of each cycle, there are a lot of sunspots; at the bottom of each cycle, there are a lot fewer. We just passed another peak, and it had only about half the number of sunspots that each of the previous three peaks had. In fact, this last peak had the lowest sunspot count seen in at least a century. This seems to be playing into Zharkova’s and her colleagues’ prediction of another solar minimum, and perhaps another little ice age. Only time will tell if they’re right.