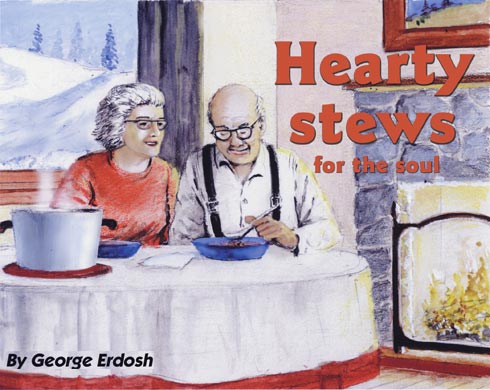 A great pleasure of a winter night is to crawl into a warm bed under a thick goose-down comforter, as soft and fluffy as the first snow of the season, while your bedroom is cold enough to see your breath. Culinary pleasures are also part of our creature comforts, and a comparable winter night’s pleasure is a heart- and soul-warming sturdy stew on the dinner table.

We never improved on the recipe of stews our ancestors created over the hundreds of thousands of years. The same cooking principles still apply, and even the ingredients are similar, though the wild game is now replaced by tender, flavorful meat of corn-fed domestic animals. Vegetables, herbs, and spices in our stew are hardly different from that of our ancestors.

Even though good cooks follow recipes, stews are very forgiving, amenable for substitution without harm in flavor. Following a recipe is a good idea both as a checklist to assure no ingredient is left out and to keep relative amounts of meat and vegetables in ideal ratio.

When preparing a stew, never ever think of skipping the first step in the recipe: “Brown the meat.” Even our ancestors learned early that using roasted meat instead of adding raw meat to the dish greatly improved the flavor of the stew. Browning generates a powerful flavor-inducing chemical reaction in the meat that is responsible for much of the final flavor of the stew. It’s a messy first step but is as essential as dishwashing.

Before browning, dry the pieces of meat well with paper or kitchen towel. If the meat is too moist, the moisture cools the surface of the cooking pan, the meat leaks its juices, and it steams instead of browns. Overcrowding the hot pan does the same. Add pieces slowly, a handful at a time, or brown in several batches to always keep the pan hot. Using a heavy pan helps to keep the heat, too, as well as maintain an even heat. Brown on high heat, stirring the meat constantly, then transfer it to a stew pot for the slow, gentle cooking process.

When all the meat is browned, a good deal of the flavor is still stuck to the bottom of the browning skillet. A process chefs call “deglazing” is what transfers the flavor into the stew pot. Use a small amount of liquid over low heat to dissolve the solids and flavors from the browning pan, scraping the bottom until nothing is left undissolved, and pour that over the meat. Wine is also an excellent deglazing liquid and further improves the flavor of any stew.

Meat is the soul of a stew. Fish stews are also superb, usually made from a mixture of fish such as the famous San Francisco cioppino. But, leave poultry for other culinary creations; they are not sturdy enough for stew.

Whether you use beef, pork, lamb, or game, good quality but tougher cuts are the best for stewsthey have excellent flavorand the long, slow cooking makes them fork-tender. Any part of the chuck is the best choice for beef; round steak and eye of round are the next best. Any lean cut, such as shoulder, is suitable for pork stews, and for lamb choose the leanest, less tender cuts such as shank, shoulder, breast, and leg meat. It is always best to buy a chunk of meat that you trim and cut up yourself (it takes minutes) instead of packaged stew meat.

When you prepare a stew with wild game, cut every scrap of visible fat from the meat to avoid the gamey flavor and replace it with oil or fat of your choice.

Add sturdy herbs like bay leaf and rosemary and all spices early in the cooking process, but more tender herbs, such as thyme and parsley, are best added late in cooking. Although MSG (monosodium glutamate) has a bad reputation, it is a natural ingredient in most of our foods that enhances flavors greatly. Good chefs always add it to soups, stews, and sauces. You find MSG in the market by the spice section.

The small amount of liquid in a stew may be water, stock, wine, or beer.

Cook the stew at the lowest possible setting on your stovethe liquid should gently bubble (“smile,” as French chefs say); never boil.

When the meat is fork tender but not falling apart, the stew is ready. Letting it stand for hours only improves flavors, but serving it right away is just as good. Sometimes the meat and vegetables release a lot of moisture, the stew is too soupy, and needs thickening. You have two choices: Thicken the liquid with a starch such as cornstarch, flour, tapioca, or arrowroot starch; or cook the liquid down.

When you choose a starch, never add it directly to the stew (the starch will clump up), but first make a paste with cold water, stirring the water a spoonful at a time into the starch until it forms a heavy cream-like smooth paste. Then pour the paste into the simmering stew under continuous stirring. Start with a small amount of starch (a few tablespoons); if the stew is still soupy, repeat with more starch.

Cooking the liquid down, a process chefs call “reduction,” has the advantage of concentrating the flavor. But, reducing the liquid has problemsit takes time and high heat. And getting rid of extra liquid may take half an hour of boiling, during which time your stew meat overcooks and begins to fall apart. Smart cooks avoid that. Instead, they first drain most of the liquid off the stew into a wide saucepan and boil it down on high heat until the liquid is thick and syrupy, a mere minutes. Then they blend this very zesty sauce back into the stew, reheat and it is readythick, full of flavor, fast, and the meat is not overcooked. Reducing the liquid this way is always preferable to using starch.

This recipe results in a home-style, flavorful, and easy-to-make beef stew of the kind many consider as comfort food.

Dry the beef well with paper or kitchen towel. Brown in a small amount of oil a handful at a time in a heavy skillet over high heat. Transfer into a 2-quart stew pot.

When all the meat is browned, add wine, stock, garlic, salt, pepper, and herbs to the meat; stir; bring to a gentle simmer; and cook covered on lowest heat for one hour, stirring occasionally.

While stew is simmering, deglaze the pan you browned the meat in with a small amount of water or wine by simmering the liquid and stirring the browned pieces until every bit is dissolved. Add this to the stew.

Stir vegetables and olives into the stew, add more liquid if necessary, and continue to simmer covered for 40 minutes or until the meat is fork tender.

If stew is too soupy, thicken by cooking the drained liquid down in a separate wide pan or by adding starch stirred into a thick paste with cold water into the simmering stew.

Serves 4 to 6. Serve with freshly warmed bread and butter or with plain boiled potatoes on the side.

When beer is an ingredient in a recipe, in most cases it adds no more than extra liquid. In this stew (that Belgians call carbonnade), it is an essential flavor ingredient.

Sauté onion over medium heat in two tablespoons vegetable oil until beginning to wilt, 6 to 8 minutes. Add sugar and continue cooking until sugar begins to turn the onion brown, 2 to 4 minutes. Remove from pan and spoon into a heavy two-quart stew pot.

Wipe lamb with paper or kitchen towel until perfectly dry. Brown in heavy sauté pan or skillet in the rest of the oil over high heat a handful at a time without overcrowding the skillet.

Add browned lamb into the stew pot. When all browned, stir in herbs, salt and pepper, and part of the beer. Sprinkle flour over the surface and stir into the liquid. Continue to add the rest of beer while stirring and slowly heat to simmer. Add more beer if needed.

Simmer carbonnade over very low heat until lamb is tender. Start testing after an hour and stop cooking as soon as the meat is soft, tender, and still moist, about 1½ hours.

Serves 4. Best over noodles or boiled potatoes. Warm bread to dip into the liquid is a welcome addition to go with this carbonnade.

Cardamom-apple pork simmer:
(Modified from a National Pork Board recipe)

In today’s rushed lifestyle, having extra food in the refrigerator or freezer is like money in the bank. Here is a pork stew that not only holds very well but benefits from waiting a day for your diners. On standing, the spices infiltrate the apple and pork, and the flavors marry. Prepare extra for a second meal. This dish holds well in the refrigerator for three or four days and in the freezer for six months if there is enough sauce to cover the meat and insulate it from oxygen that causes rancidity.

Inexpensive, lean, flavorful pork is best for this dish. Buy a boneless pork roast, trim off the fat and tough connective tissues, and cut it into cubes yourself instead of buying precut meat. You’ll have fresher, better quality, and leaner meat at a lower price.

When the meat is brown and begins to release juices, add stock and bring the liquid to a low simmer, then reduce the heat to low and stir in salt, black pepper, cardamom, cinnamon, and turmeric. Simmer covered for 45 minutes, checking occasionally for moisture level.

In a small bowl combine brown sugar and cornstarch with Worcestershire sauce and water. Add to the stew with continuous stirring and simmer for a minute until cornstarch begins to thicken the liquid. (If it appears too thick, add a little more water.)

Add apple wedges and raisins, and cook slowly, stirring often, for 2 to 6 minutes (some apples cook faster than others) until apples turn translucent and soft but not mushy (test with a fork). Stir in lemon juice.

Serves 4. This dish is best served over noodles or rice with extra sauce on the side. 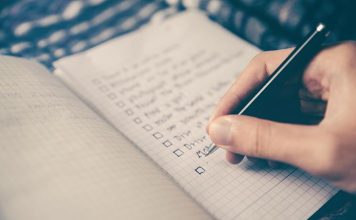 With commonsense planning, you can survive hard times