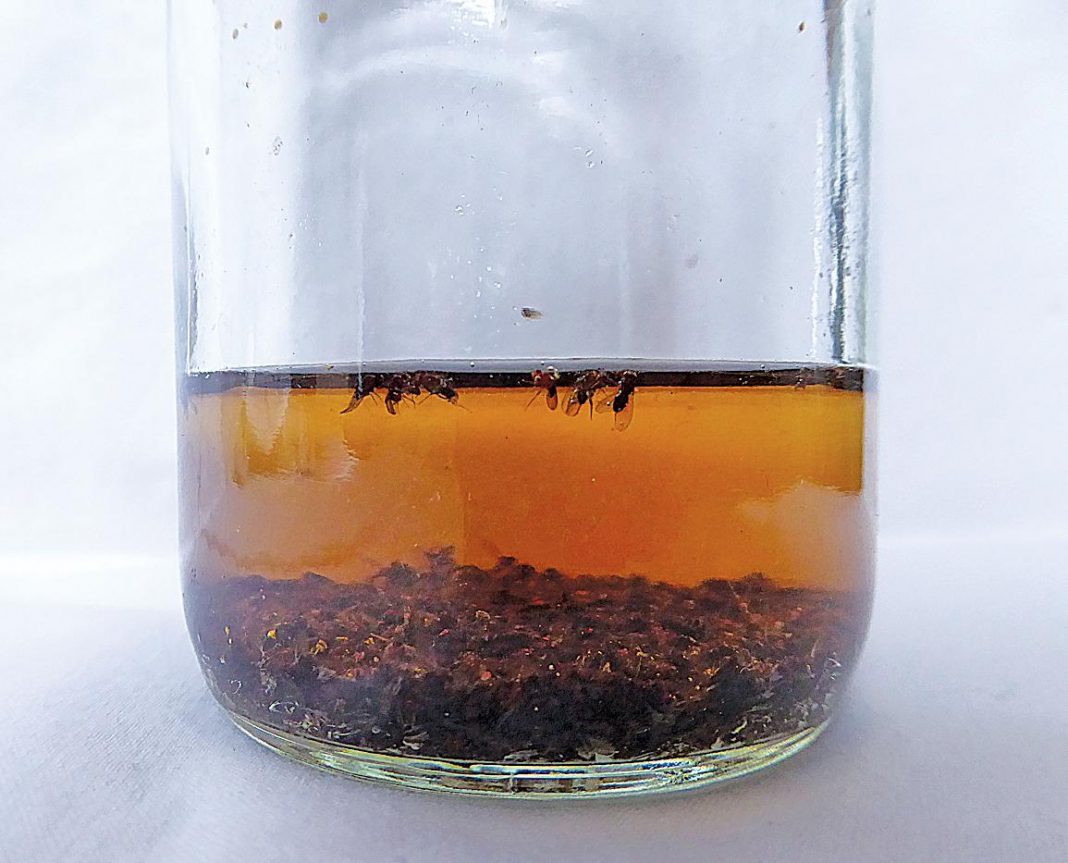 Last summer, my little compost bucket near the kitchen sink became home to a zillion fruit flies. Once they’re established, it’s devilishly hard to get rid of these little critters. By chance, I read about a homemade fruit fly trap that turned out to be wonderfully effective: Pour vinegar into a wide-mouth jar (I used a half-pint canning jar) and add a dash of dish soap. Mix vigorously.

Fruit flies are attracted to the smell of vinegar, and the dish soap breaks the surface tension of the vinegar. The flies drown.
Buoyed with this success, I started looking into other homemade pest traps and learned there are many simple and nontoxic options to control unwanted insects.

I happen to be fond of spiders and refuse to kill them. (I put them outside instead.) However, that doesn’t mean I welcome them indoors. Spiders detect smells with their feet, so this can be used to your advantage.

Fill a spray bottle with water. Add about half a teaspoon of dish soap and about a teaspoon of a strong-smelling essential oil (such as lemon, lavender, tea tree, grapefruit, or citronella). Spritz common spider hangouts: behind bookshelves, under beds, etc. To keep the scent strong enough to repel the arachnids, refresh the spray fairly often.

Some wasp deterrents include fresh sliced cucumber (apparently it contains an acid the wasps dislike) or Ziploc bags filled with water and a penny (supposedly the double refraction of light on the water and the penny discourages wasps; I’ve heard mixed reviews).

A yellowjacket trap can be made with an empty plastic soda bottle. Cut the bottle top off about one-third of the way down. Rub some cooking oil on the inside walls (this keeps the wasps from climbing up), then flip the upper bottle portion with the opening upside down to make a funnel, and tuck it inside the lower part of the soda bottle. Duct tape them together. Bait the bottle with a couple inches of juice or sugary soda. Make sure you place the trap where pets and children are not likely to get stung from the increased wasp activity.

If you find a yellowjacket nest in the ground, you can pour soapy water into it at night to kill the wasps. If you do this, wear suitable protective clothing, just in case.

Some people swear by citronella candles, but I’ve never had much luck with them. Mosquitoes can be trapped in a similar soda bottle trap described for wasps; however, the bait must be different.

For mosquito bait, mix 1 cup very warm water with 1 cup of sugar. Add 1 teaspoon of yeast, and let the mixture froth and bubble. Then pour it into the soda bottle trap, along with an extra cup of water. Cover the top loosely with plastic wrap and allow it to ferment for a week, then uncover and hang the trap where mosquitoes will find it.

In the late summer, our home is plagued with houseflies. Besides the faithful flyswatter, we hang sticky flypaper in strategic locations.
Homemade flypaper is simple. Cut a brown paper grocery bag into strips about two or three inches wide, punch a hole at one end, and string some twine through it (string the twine before coating the paper). Mix ¼ cup sugar, ¼ cup honey or corn syrup, and 2 tablespoons water in a saucepan on low heat, and stir until the sugar dissolves. Pour the mixture into a shallow bowl and dip the paper strips on both sides until thoroughly coated.

You’ll need to hang the paper strips to dry, so make sure there’s something beneath to catch the sticky drips.

Once hung, the paper will eventually dry and lose some of its stickiness, in which case they can be re-spritzed with sugar water (which not only re-stickifies the paper, but also attracts more flies).

There are many other homemade options to eliminate unwanted visitors. This article barely scratches the surface, but I hope it encourages you to further investigate nontoxic methods of repelling or reducing pests.

Start your food storage on $10 a week