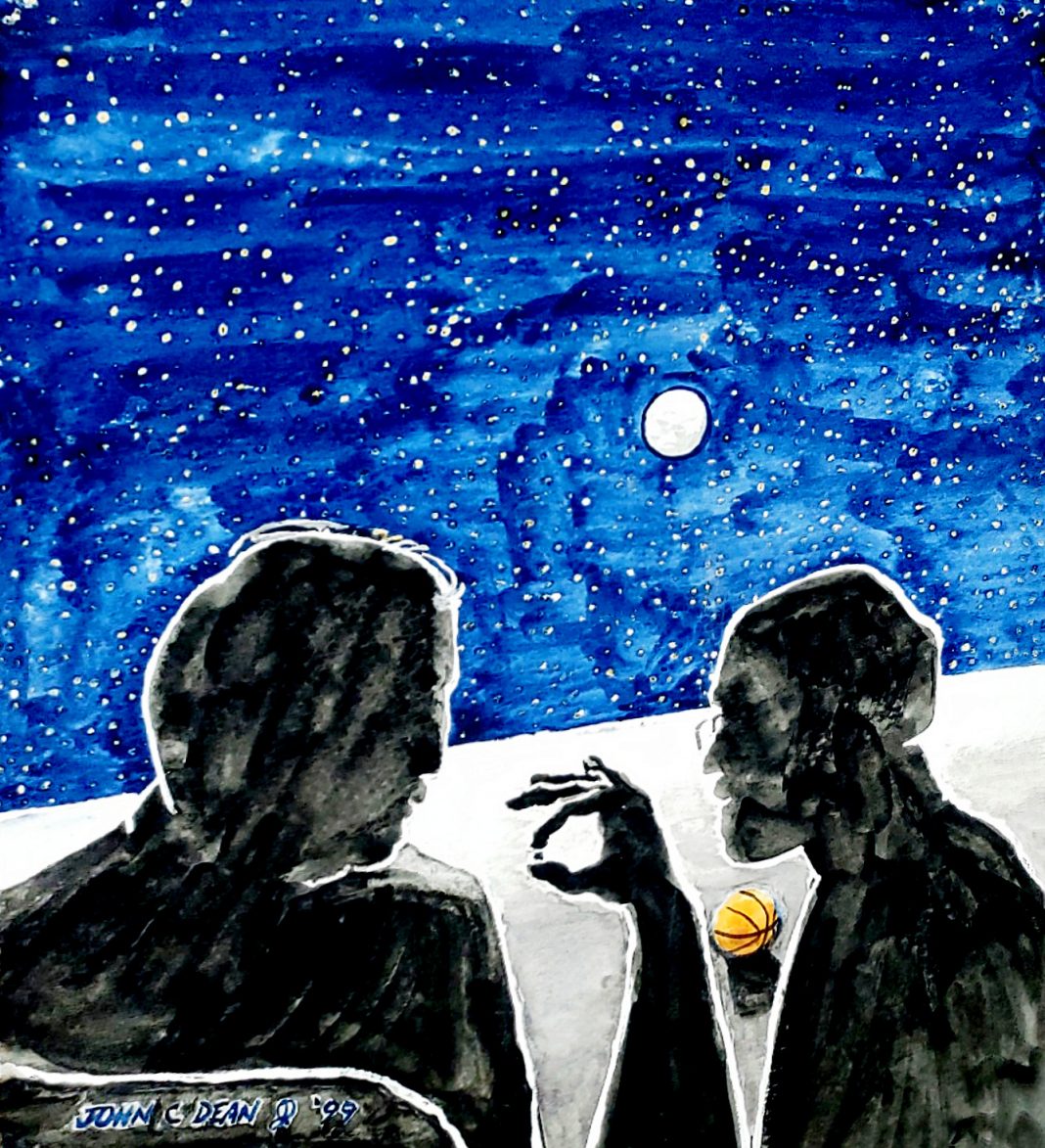 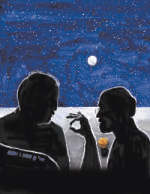 But what is a true perspective of our solar system?

Here’s a good experiment for homeschoolers  or anyone else who wants to see how immense the solar system really is. Take a basketball and imagine that it is the sun and everything else in the universe is to the same scale. In our basketball-sun model, how big do you think the planets would be and how far away do you think they’d be?

To get a perspective of how far away the planets are, place the basketball on the ground and walk away from it.

If you know your stride (mine is about 2½ feet) you can put the basketball on the ground and pace this off. Better yet, if you have access to a football field at a local high school or college, place a basketball on one of the goal lines and walk out to the 11 yard line. This is where Mercury is.

You can perform these calculations for the distances and diameters of each of the remaining eight planets. I’ve done this for you and placed them in Table 1.

To locate Venus you will have to get about 62 feet from the ball  that’s just beyond the 20 yard line. Venus, incidentally, would be a small but bright pebble about 1/12 of an inch in diameter.

Earth is about 86 feet away from the ball  that’s almost at the 29 yard line on a football field  and it’s slightly bigger than Venus. But unlike Venus, earth has a satellite, the moon. In our model it will be a mere 1/40-inch in diameter and orbiting about 2 2/3-inches from the earth.

If you can, do this exercise on a day when there’s a full moon visible in the sky because if you feel this scale isn’t right, now’s the time to judge for yourself. Even though the moon is much smaller than the sun, because it is near to us and the sun is so far, they appear to be the same size. (That’s why during a solar eclipse the moon appears to cover the sun almost perfectly.)

But whatever you do, don’t look at the sun like this to get a comparison; it’s a sure way to permanently damage your eyes.

Once you make this comparison, you can go back to where Venus and Mercury are and hold your pencil at arms length to see how large the basketball appears. It will appear larger from these vantage points and give you a fair idea of how large the sun appears when seen from either of these planets.

The next planet out is Mars and in our model it’s 130 feet away from the basketball, or about 43 yards from the goal line. The basketball appears a lot smaller from here, as does the sun from Mars. Mars itself would be less than 1/20-inch in diameter. It also has two satellites, but in our model those would be specks of dust orbiting less than 1/6 inch from our planetary model, and they would be all but invisible to us.

Throughout this scaled down solar system there would be a scattering of dust, finer than the motes of dust you see floating on the rays of sunlightthat stream into a house on a summer’s afternoon. This “dust,” though extremely sparse, would be thickest between the orbits of Mars and Jupiter. This is the asteroid belt.

Beyond the asteroid belt is Jupiter, the largest planet. In our model it’s almost an inch wide and 445 feet  or almost one and a half football fields  away from the basketball. 445 feet is beyond the home run fences of most major league ballparks. A basketball, sitting at home run distance, would appear quite small from home plate, and the sun appears quite small from Jupiter.

Jupiter also has about 16 satellites, only four of which we would see in our model, appearing as grains of sand, while the rest would be specks of dust like Mars’s satellites. Incidentally, Jupiter has more mass than all the other eight planets, all their satellites, and all of the asteroids in our solar system, combined.

Saturn is 820 feet away from our basketball. That’s almost three football
fields away. It is also the oddest looking of the planets. In our model it
is 5/6-inch in diameter along its equator but noticably smaller, only 3/4-inch in diameter, along its poles, so it looks like a flattened sphere. It also has a ring around it that is 15/6 inches in diameter.

Like Jupiter, Saturn has a swarm of satellites, only one of which  Titan  is significant. The rest of Saturn’s satellites would be invisible, or nearly so, in our model.

The next planet out, Uranus, is 1/3-inch in diameter and it’s 1645 feet away. That’s almost a third of a mile from the basketball. It has at least five satellites, all of which are like tiny grains of sand in our model.

And after that is Neptune, also 1/3-inch wide, but it’s about a half mile away from the basketball. The basketball appears quite small from a half-mile. Neptune has at least eight satellites, only one of which would be as large as a grain of sand in our model.

Last is Pluto. Pluto is just a grain of sand, actually two grains in our model, because Pluto’s satellite, Charon, is about half the diameter of Pluto. Pluto’s average distance from the basketball would be almost 3400 feet. That’s roughly 2/3-mile. But because its orbit is so eccentric, sometimes it is a little closer to the basketball than Neptune  a half mile away  and at other times it’s 5/6-mile away. Standing 2/3-mile away, you’d barely be able to see the basketball. In reality, if you could stand on Pluto, the sun would appear as no more than the brightest point of light  the brightest star  in a very black sky.

Beyond Pluto in our model, to a distance of 16 miles, is a haze that represents the Ort cloud; this is where comets are born.

There are some other interesting aspects to our model. For instance, in the real world the speed of light is approximately 186,284 miles per second. But in our model light moves only two inches per second or about 10 feet per minute. It takes almost 8½ minutes for a beam of light starting from the sun’s surface to reach our earth, and it takes more than five hours to reach Pluto.

In one year light travels almost six trillion miles. Written out, that distance is 6,000,000,000,000 miles. In our model one light year is just about 1,000 miles. This means that if our basketball size sun were perched atop the John Hancock Building in Boston, Massachusetts, then St. Louis, Missouri, would be one light year away. 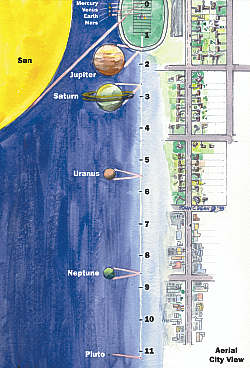 So you can see, when placed in proper perspective, our solar system is immense, but it is also mostly empty space with a few almost insignificant objects in it. And it is also extremely isolated. In spite of the number of stars we see in the night sky, none are really close to us. The very closest, other than our own sun, are the three stars that make up the Alpha Centauri star system: Alpha Centauri, Beta Centauri, and the closest of the three, Proxima Centauri. These stars are about 4.3 light years away. In our model, 4.3 light years are about 4400 miles, approximately the air distance from Boston to Moscow, Russia. The brightest, Alpha Centauri, is about the same size as our sun and can be seen from earth. In other words, in our model it’s as big as our basketball, it’s 4400 miles away, and we can see it, but only as a point of light. So, if we wanted to create this star system, to be in perspective with our model, you would have to locate it 4400 miles away.

At least 95 percent of the stars in our universe are smaller than our sun, but there are some that are much larger. They can be as much as 400 times bigger. Compared to our basketball, such a star would be a sphere that reaches from one goal line of a football field to the other  100 yards in diameter.

Also, as our own sun ages, and burns up its nuclear fuel, it will become what astronomers refer to as a red giant. Its diameter will expand and it may extend well beyond the earth’s orbit. In our model this means the sun will inflate until, eventually, it is 70 or so yards wide. This will not occur for another five billion years, but when it does, Mercury, Venus, and  assuming it gets large enough  earth will be vaporized. All three will cease to exist.

If this doesn’t give you an appreciation for the vastness of the universe, consider if we expanded our basketball-sun model to include the entire galaxy we live in, the Milky Way. The Milky Way is about 100,000 light years in diameter. We would have to make our model 100 million miles wide. This means that to make a model of our galaxy where our sun is the size of a basketball, our model would have to reach from the sun to a point some 10 million miles beyond the earth.

The edge of the universe, if it’s proper to talk about the universe having an edge, is thought to be about 15 billion light years away from us in all directions. Distances this large are incomprehensible. To extend our model to include the entire universe we would need all the space between here and Alpha Centauri  and at least 10,000,000,000,000,000,000,000 basketballs of various sizes. Did somebody say, “Wow!”