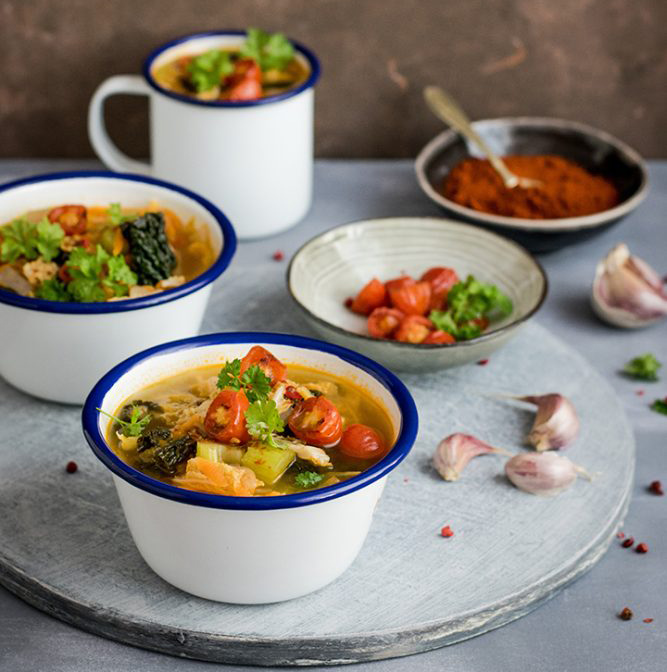 Since childhood, homemade soups and stews have been high on my list of favorite foods. The aroma of a savory soup or stew slowly simmering on the stove top gives an added feeling of warmth and comfort to my home, especially during the winter months. I credit this lifelong love affair to the infinite variety of colorful, rich, and wholesome soups and stews that my mother and grandmother prepared from their mixture of German, African, English, and Native American culinary heritage.

The aromatic signals that broadcast from a slow simmering Virginia Brunswick, Kentucky Burgoo, French Chicken, Irish Lamb, or Louisiana Jambalaya stew, brings everyone into the kitchen anxious for a taste. Add the complementary aroma of fresh baked bread, and the sensory experience can only be described as sublime.

Dig into your memory and think of the best stew that you ever ate; it could be a spicy Mulligatawny, a Hungarian Goulash served with fresh sour cream, or any one of the limitless varieties made around the world. If all of the stews of the world were gathered together and published in a single printing, the result would resemble an encyclopedia. A glance at such a publication would reveal that there is a stew for every taste, level of kitchen savvy, and activity schedule. Stews make the best use of all seasonal ingredients, offering the imaginative cook the possibility of unlimited variety at relatively low cost. Most stews keep well in the refrigerator or freezer, allowing the busy cook to make the best use of limited production time.

My mother exemplified the busy, imaginative, cook who was forced to make best use of a limited amount of time to plan and prepare meals. She overcame this obstacle with an old, used, chest-type ice cream freezer, a large cast-iron Dutch oven, and an old gray metal box full of my grandmother’s hand-written recipes. On days when she didn’t have to work, she would make one of my grandmother’s hearty soups or stews, using whatever meats and vegetables were on hand. The large capacity Dutch oven made it possible for Mom to prepare more than was needed for a single meal. She would then quickly cool the leftovers in the refrigerator and place them in the freezer for a future meal. There were always a few extra biscuits or pieces of corn bread to be saved as well. If she had some extra time, she would make a few loaves of what she called pastoral bread, a wonderful and simple bread that we used for sandwiches, toast, or as a complement to one of her delicious leftover soups or stews.

When she was short of time because of her unpredictable work schedule, we always had the “stew freezer” to provide us with a delicious and hearty meal. Leftover stew, by the way, usually develops more nuance and full body than it had the day that it was made. But you knew that.

Soups and stews have been part of the American diet from the beginning. During the early years, in contrast to modern times, the meat protein ingredient for soup and stew was supplied primarily from game animals. Today, domestic animals provide the bulk of our protein. In the earliest cookbooks, recipes for stews are hard to find. This is probably because stew was so common at every table that cookbook authors felt recipes were not necessary. It’s a rationale worth considering because there is nothing elaborate or complicated about preparing a good homemade stew.

Experience has taught me that, if you can boil water, you can prepare any of the worlds classic stews. Any of them. Enjoying a hot bowl of homemade stew accompanied by a crisp salad and hot bread, fresh from the oven, is an experience that you, your family, and your friends will look forward to repeating often.

The two stew and bread recipes I am sharing with you in this issue have been in my family for three generations. Both my mother and grandmother were never reserved about sharing their wealth of culinary talent with everyone, so I am sure that they would be happy to know that their tradition of sharing good recipes still lives.

Before I start, the only piece of special equipment that I would suggest is a cast-iron Dutch oven with a capacity of at least five quarts. The most valued tools in my kitchen are the pieces of cast-iron cookware that I inherited from my mother. I have three skilletstwo 10½-inch and one 14-incha chicken fryer, and a large Dutch oven. The chicken fryer and Dutch oven belonged to my great-grandmother. Cast-iron cookware has always been, and still is, inexpensive. It is the original nonstick cookware. Once seasoned properly, it will continue to improve with age. If you have a cast-iron Dutch oven, the following recipe will demonstrate just how easy and rewarding the preparation of a classic stew can be. A stainless steel pot with a heavy gauge aluminum bottom can be substituted for the cast-iron. But be aware that this type of pot does not distribute the heat as well as cast-iron, and scorching the stew is more likely.

Jambalaya stew is a classic representation of one of the most sophisticated cuisines indigenous to this countryCajun/Creole. Since Creole and Cajun cuisines are often referred to as if they were the same cooking, let us pause to reflect on why they are close, but not the same.

Both cuisines were born in Louisiana and have French roots. Cajun is very old country cooking that originated in southern France. When the French speaking Acadians were expelled from eastern Canada because they would not swear allegiance to the English government, they migrated to southern Louisiana. They held fast to their culture and adopted their traditional French dishes to incorporate the wild fruits, vegetables, and greens that grew in the area. Cajun cuisine and culture is still very much alive in many Louisiana homes.

Creole, on the other hand, is city cooking that was born in New Orleans. In the early days many flags flew over New Orleans including French, English, Spanish, and Italian. Each nation that laid claim to the city imposed its own cuisine on the remaining residents. The resident cooks, most of whom were African, were usually retained in their positions by new reigning families. These Africans were creative and imaginative cooks, with a flair for incorporating their own home style of cooking into the ever-changing cuisines that flowed into the city. The result was the birth of Creole cuisine, a complex and sophisticated style of cooking that even reflects some Native American influence.

My jambalaya uses pork as the main protein, but chicken, shrimp, oysters, scallops, and rabbit can be substituted individually, or combined in quantities, that suit your own taste and budget. The sausage and ham in this recipe are flavor boosters. Cajun smoked tasso ham and Andouille sausage are preferred flavors, but other smoked hams and sausages will also work well in this recipe. I use Basmati rice in all stews and casseroles that call for rice. It’s rich nutty flavor adds nuances that no other rice can provide.

Brunswick Stew and its close regional cousin, Kentucky Burgoo, are two of the finest regional stews in this country. Both are classic Southern hunter’s stews that are traditionally prepared with whatever game meats are brought home from the day’s hunt, along with fresh vegetables available from the garden. This stew is named for Brunswick County, Virginia, which has a history dating back to the days when Virginia and the Carolinas were British colonies. If you have read Gone With The Wind, you may recall from the first chapter that Brunswick Stew was served at the Twelve Oaks barbeque.

Both of these stews are at their best when prepared in large quantities and held under refrigeration for at least 24 hours before being served. I have chosen Brunswick for this column because it’s easier to prepare then Burgoo and does not have to be prepared for an army to maintain its integrity. Of the wild game meats, squirrel or rabbit are the first choice for this recipe. But I have chosen chicken thighs because the meat remains sweet and moist during the cooking process, as does squirrel and rabbit, and it is the meat you’re most likely to find available. Although the taste of chicken isn’t as interesting as squirrel or rabbit, the overall quality of the stew does not suffer.

Your choice of vegetables and starches need not follow my recipe. Feel free to use cabbage, okra, beet greens, spinach, collards, turnip, rice, or anything else that suits your taste. Be aware, that the volume of this recipe uses all available space in a 5-quart Dutch oven. If anything you substitute increases the volume of the stew, you will have to use a larger pot. However you make it, I think you’ll find sitting down to a steaming bowl of Brunswick Stew, a tall glass of English porter, and a warm chunk of pastoral bread on a cold winter night is wonderful.

To make this bread you need only one panyour 5-quart Dutch oven. The ingredients are basic as well: bread flour, water, yeast, sugar, and shortening. I always make a double batch of this dough, bake half, and freeze the rest for another time. When you bake this bread in the Dutch oven, the resulting loaf is one of the most impressive breads in existence. It is a full 10 inches in diameter and at least 8 inches high at the top of it’s peak. A full-sized Italian panetonne looks like a muffin standing beside this bread. This loaf is also a beginning baker’s dream because it comes out of the oven picture perfect every time and it tastes as good as it smells and looks. If you don’t have a Dutch oven, use three standard loaf pans. But I must stress the importance of using hard wheat bread flour when making this bread. All purpose flour does not contain enough gluten to meet the special proofing and baking requirements of this loaf.

Corn bread for a Cajun/Creole stew

Jambalaya is a casserole type stew that cries out for a good corn bread. The following is a recipe that I created as a special complement for this spicy, rich tasting stew. The recipe makes enough corn bread to feed eight hungry adults. If you are lucky, there may even be a piece or two left over for you to enjoy with your morning coffee.