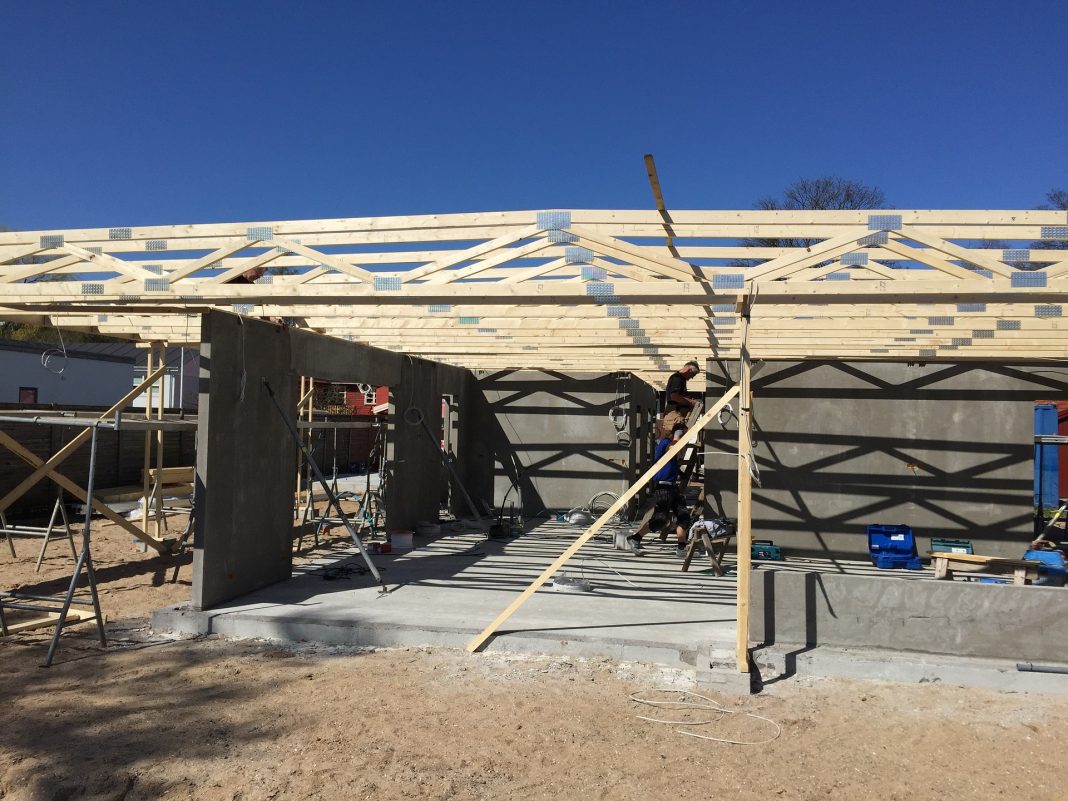 Anyone who has ever worked on roof framing knows that nailing up rafters is a two-man job at the very best. At worst, the task requires the services of three or four people. But there are times when the extra help is not available. If you live in the real backwoods, you may find that it is highly expensive to pay carpenters to drive out to the hinterlands and then work in teams of three or four, which means at the very least, even if you hire amateurs, $30 an hour for the team, or $240 per day.

And that’s if you locate cheap labor.

However, there is a very simple way that virtually anyone who is physically capable of modest manual labor can nail up rafters quickly and easily and save a great deal of money in the bargain. By using the three simple and almost-free devices shown here, you can install rafters of any length, and you can do every step of the work without an assistant and without straining your back or risking injury.

Start with your rafter plan and work logically through the whole job. Assume that the wall framing, complete with top plate and top cap, is done and you are ready to raise the ridge pole or beam. Assume, also, that the ridge beam will consist of one single and very long beam at least 25 feet in length.

The reason we are starting with the impossible task is to illustrate that if you can install this monster, the more common ridge beams are no challenge at all.

Start by building what I call a V-support. This takes four short lengths of 2×4 lumber (or whatever size you are using). If your roof peak is to be eight feet higher than the top of the wall frame, you will need one eight-foot timber, one four-foot timber of the same width and thickness, and two two-foot (or 18-inch) lengths of lumber that can be virtually any width and thickness you have handy (but it makes sense to use the same dimensions in all parts of the device you are building). You will also need a small section of half-inch plywood or a half-inch board. The length can be a foot or so. 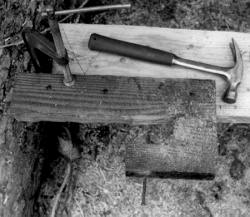 Use an 18-inch board (2×8 works well) and cut the board as shown in the photo above. The gap near the bottom end should be wide enough for a rafter to slip into it easily.

When ready, turn the eight-foot timber and assembly and nail the other two-foot (or 18-inch) section as you did the first unit. Do not use plywood or board on this side.

Have a ladder and large C-clamp ready. The 2×4 lumber used in the V-support is not heavy, and you can either carry it up the ladder with you or you can use a rope to pull it up after you are up the ladder.

Stand the assembly so that the base rests upon the top cap. Hold it with one hand, and with the other hand tighten the C-clamp so that the assembly will stand unsupported while you prepare to nail the base to the top cap or plate. Be sure to align the two center marks you made and be certain that the edges of the base and top cap or plate are aligned exactly. If they are not, you can loosen the C-clamp slightly and use a hammer to tap the edges into alignment.

When all is ready, sink the 16d nails into the top cap or plate. Install two short temporary braces on each side of the V-support to keep the supports from leaning or falling while you install the ridge beam. Fasten one end of the brace just below the bottom ends of the short (two-foot) sections of 2-x-4s. The assembly is now firmly in place and ready to use.

Now build another assembly exactly like this one and install it at the other end of the building frame. 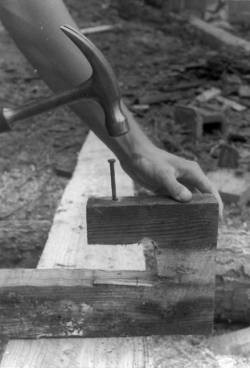 At this point you are ready to raise the roof beam. To do so, make another simple device by using an eight-foot length of 2×4 (this can be used later for studs or bracing, if you wish) and at the end of the 2×4, nail in place two short lengths, just as you did for the V-support. This device is what I call a beam-lifter.

To use it, lay one end of the ridge beam atop the wall framing and position it so that it is standing on edge and leaning against the V-support. Allow four feet of extra length to protrude beyond the wall frame so that when you lift, the beam end will not come short of the V-support.

Use the lifter so that the two short units of lumber (which form the modified V) slip over the ridge timber. Then stand directly under the beam and lift the eight-foot assembly (use longer if you need to) straight up, bring the end of the beam to a point just slightly above the V-support, and then lower the ridge beam into place.

Now, if this sounds like a tremendous amount of lifting, more than you can handle, let me assure you that I am 62 years old and am recuperating from a badly broken left leg, and I single-handedly lifted a 25-foot ridge beam into place. To make it more interesting, I had cut the beam only that morning from a very healthy tree that had blown over in a storm just hours earlier. The tree was very green and loaded with sap (it was June when I did this), and I had no trouble at all with the lifting.

When one end is in place, raise the other end of the ridge beam to the top of the wall framing and then use the lifter as before to raise the other end into position. When both ends are seated, use a hammer to tap or drive the beam, if necessary, into a perfect position.

When you have erected the ridge beam, there is always the potential problem of sagging, particularly if the beam extends over a wide area and is not supported along the way. If this is a problem in your project, support your ridge beam every eight or ten feet (or as needed) along its length. Simply build another variation of the V-support, one that reaches to the floor (ideally over a joist). 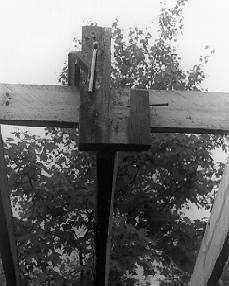 With the rafter holder clamped to the ridge beam, you are ready to slide the rafter into the gap. The holder-nail is ready for use. You can also hold the rafter with one hand and nail it in place, if you do not wish to use the holder-nail.

Now it is time to make a single rafter holder. Perhaps you have tried to stand on the top of a ladder and then, while you were holding on to the ladder, you tried to hold a rafter in place so that you could nail it to the ridge beam. It is difficult at best and impossible at worst.

By using this simple rafter holder, you can nail rafters in place with little or no difficulty. To make the holder, choose a length of 2×10 lumber at least 18 inches long. Mark the holder in the following manner.

Measure over from the left edge of the piece of lumber four inches and, marking along the grain, make a straight line one foot in length from the end of the board toward the other end. Now use a square to mark a line l¾ inches wide at a right angle to the longer line. Make another right angle and mark upward six inches and then make a final right angle line to the right and to the outside edge of the board.

Now cut along the lines, and the finished product is a slot just wide enough to allow a rafter end to rest inside it. One side of the slot is short enough to allow you nailing room.

To use the single rafter holder, mark your ridge beam for rafter locations and hold the rafter holder so that the slot is aligned exactly (and true vertically) with the rafter position. Then use the C-clamp (one of the most valuable tools you can buy at a low cost) to fasten the holder to the ridge pole or beam.

Lay one end of the rafter over the outside wall frame, and as you climb the ladder, carry the other end of the rafter (pre-cut to conform to the angle of the roof) or pull it up by using a rope, and then set the rafter into the slot in the holder.

The holder will keep the rafter in position now. You can turn it loose and concentrate on nailing the rafter to the ridge beam. 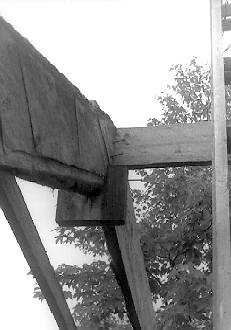 The rafter (home-made with a chain saw) is in place. Note how the rafter fits snugly into the gap. Two nails have been started, and the holder-nail is in position.

You will probably need to mark the long arm of the rafter holder so that the top of the rafter will be flush with the top of the ridge beam. Remember that if you are using a 2×10, and if you angle-cut back six inches, the length of the end of the rafter along the angle cut is now about 11½ inches, assuming that your rafter was a finished width of 9½ inches.

Finally, to keep from climbing up and down the ladder so often, you can make a multiple-rafter holder that will hold four, five, or six rafters at a time. To make this holder, use a 2×10 or 2×12 board and cut slots that are 16 inches on-center and use two C-clamps to keep the holder in place.

You will need extra height on the holder, so rip a two-foot 2×4 and nail the two 2×2 units to the ends of the rafter holder so that there will be enough extension so that you will have room for the angle-cut ends of the rafters.

Now you can lay four, five, or six rafters across the ridge beam and nail them all in at once. You don’t need to worry about measuring, since the slots are already on-center exactly as they should be.

All that remains now is learning how to angle-cut the ridge beam ends and rafter tail ends of the rafters and, if you wish, to figure how to make the bird’s mouth cuts at the rafter tails and the vertical cuts. Like all other building work, it’s simple if you know what you are doingor if you have someone to explain it to you. If there is interest in these topics, they could be featured in a future article.