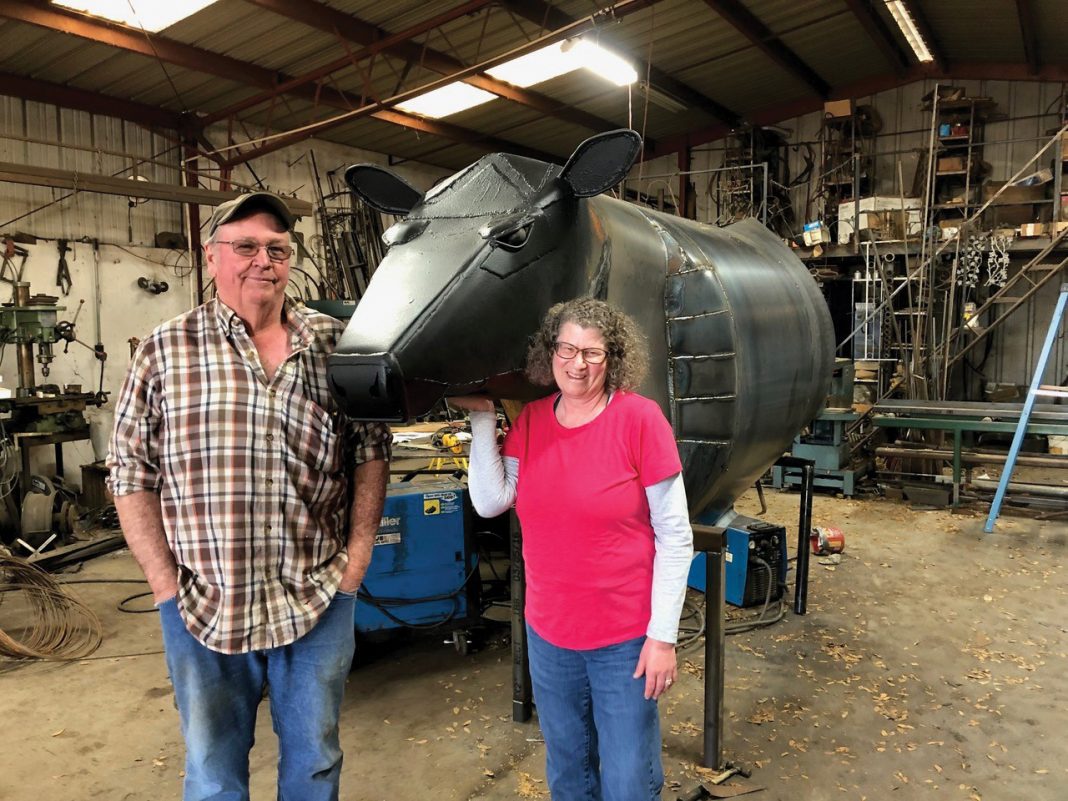 A fundamental problem for many young people entering the work force is figuring out not only how to make a living but how to enjoy the job at the same time.

Here’s my advice: Learn how to do one skill you enjoy so well that others will seek you out for your expertise. After that you’ll never work a day in your life.

This is not original advice from me. I last heard it from Doug Hammond, a retired walnut farmer in California’s Sacramento Valley. Besides being a farmer, Doug is handy with just about any tool and machine a farm needs. People have sought him out all his life for his expertise, and in retirement he does for fun what he got paid for during his working years. When I saw him last, he was welding together a bigger than life steel cow to be used by a local nonprofit to raise funds. He simply enjoys welding and is glad to donate his time in retirement.

My life has been not so different. I’m a retired publisher, now helping my son, Sam, the publisher of Backwoods Home Magazine, with various tasks — this column, editing articles, advice. During my working years, I loved getting up in the morning and running the same magazine. I slipped into retirement because I developed heart disease and had to slow down, not because I had stopped enjoying the job.

There are a lot of people like Doug Hammond and me. Once we found the job we loved, we worked for the fun of it. There were plenty of days when we were dog tired, but never dissatisfied, disillusioned, or sick of the job.

Sam is only 24 so he has discovered relatively early in life that he likes getting up in the morning and getting to the BHM office. He has a totally different skill set than I did. He doesn’t run the magazine from a writing and editing perspective as I did, but from a businessman’s perspective. He leaves the writing and editing to his business partner, eldest sister Annie, who longtime readers saw grow up in the pages of BHM.

Sam’s expertise is as a marketer. He especially understands how to use the internet to reach likely subscribers. He improves his skill level every day by studying how the internet connects people, and he is growing the magazine faster than I ever did. He’s enjoying himself as he learns and builds his business. The 10-12 hour days he often puts in are not just because he wants to grow the business, but because he enjoys it.

But many, perhaps most, young people don’t seem to follow this track with their lives.  Instead they either wander around aimlessly from job to job or they follow bad advice, the worst of which I can sum up as follows: Go to college and get a general education because an educated person will always be able to find a good job.

Being educated is not the problem. Everyone should read the classics, have a good understanding of ancient and American history, and have a firm grasp of the sciences. Education helps us make sensible choices, elect enlightened politicians, and build a society that works. But going to college and not getting a specific skill, such as becoming a doctor, engineer, accountant or other discipline for which there are ample, enjoyable, and well paid working opportunities, is a mistake. 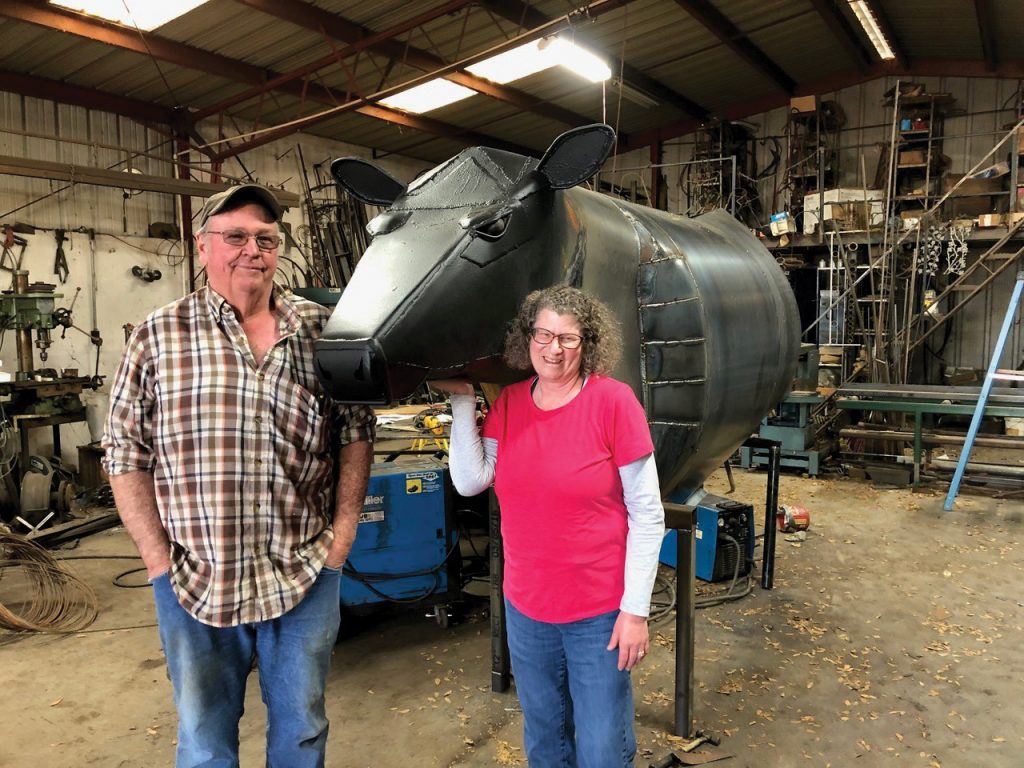 Lenie Duffy stands with Doug Hammond in front of his welded steel cow. Doug enjoys welding, has been paid well for it for years, and still enjoys it as a retirement hobby.

Making a living is a unique and consuming endeavor in which you will spend the major part of the rest of your life. You need an enjoyable skill for which other people are willing to pay well. Sometimes you are better off learning a skill at a trade school, rather than going to college for a degree for which there are only vague job prospects.

I did not understand this insight into how to make a living until I was 29. I had been a newspaper reporter at the time working the police beat for a small California daily newspaper, responsible for covering the crime and tragedy output of the police and fire stations in three small cities, the county sheriff’s office, and the highway patrol. I enjoyed the work since I liked writing, but newspaper reporters have always been overworked and underpaid, and my pay was about half that of the cops I covered.

I also wrote articles about interesting residents in the area, and one such resident, a retired engineer turned senior citizens activist named Tony Lamb, convinced me to co-author a book with him called The Retirement Threat. The book sold well and greatly boosted Tony’s activism efforts and even got him elected to his local city council.

Tony was so grateful that he became a sort of mentor for me and told me bluntly one day: “Dave, if you do anything else with your life except write, you are throwing your life away.” He was essentially telling me that I had a skill for which people would pay good money. I soon found myself working as a technical writer and editor for the defense industry making twice the money I made as a newspaper reporter, and after a few years became a manager of other writers and artists producing classified manuals for military missile systems.

This was still not my final work destination, however, because after a decade or so in the defense industry I decided I wanted to work for myself and founded Backwoods Home Magazine where I really began enjoying myself and made even better money.

By this time I was in my mid-40s, just about twice my son Sam’s age. I attribute my late start to the fact I had not been raised in a culture that taught me the best way to make a living. I had to figure it out for myself. My parents had been poor Irish, my mother an immigrant and my father the son of immigrants. It was enough for them that their kids were born Americans and had opportunities to make a better life than they had, but they had not fully figured out how best to get at those opportunities.

But they did teach their five kids to work hard and do a job correctly. My father’s oft-repeated admonition, especially when we were helping him, was: “If you’re going to do a job, do it right; otherwise don’t bother doing it at all.” We took that commandment to heart, but like him, when it was time to enter the work force I simply got a job without first getting a skill. I didn’t get a good skill until the U.S. Army trained me to be a journalist, and then my natural ability with language took over and I became good at it.

So by the age of 45, after years of figuring all this stuff out, I finally understood that both having a high skill level and by being self-employed made working for a living really fun. So I founded Backwoods Home Magazine and put everything I had learned together.

So this is my advice in a nutshell: Make your final goal to hang your own shingle with a skill for which people will pay. You’ll become the main beneficiary of your skill and you’ll be wholly responsible for success or failure. With a good work ethic you’ll enjoy the rest of your working days and won’t work a day again for the rest of your life.