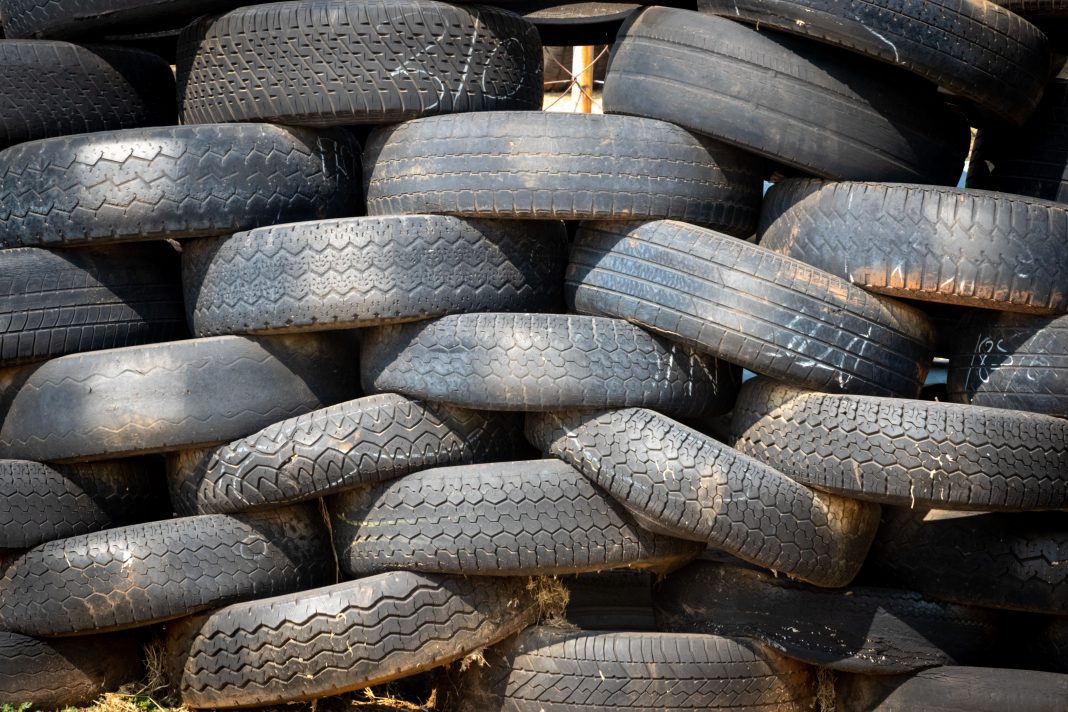 Need a prolonged workout? Want to do some major recycling? Want to stay warm and cozy with the help of the sun? All of this can be accomplished when you build your own tire house.

Some of you may be familiar with the term “Earthship”, the concept originated by Michael Reynolds, or may have seen Dennis Weaver’s house featured on public television and in magazines. Our house is similar to those. We are building ours in New Mexico, just east of Albuquerque. It is incredibly labor-intensive but a lot of fun and very rewarding.

The rows are laid brick-fashion until you have the walls nearly as high as desired. Then a frame pony-wall is built on top of that and the ceiling joists are laid on those, covered with plywood, and, in our case, a rubber (EPDM) roof. Insulation and the ceiling are constructed just as in a frame house.

As you will see in the photos, tires are used to construct the load-bearing walls. [Fig.1] The sidewall of the “top” side of each tire is cut out, then the tires are laid flat and filled with compacted dirt. [Fig. 2] It is estimated that each tire weighs approximately 300 pounds when filled.

Obviously, when tires are stacked like that and they are all filled with dirt, there has to be a way to keep the dirt from falling out of the spaces on the under side of the tire in the top row. Reynolds placed cardboard between the rows. We elected to use even more tires and used a reciprocating saw to cut the treads into pieces that could be screwed into the two neighboring tires. Fill this “valley” with dirt and compact it just as you do the tires themselves. Using this method, developed by Jim Bleakley, a neighbor and fellow tire-house builder, helps to make the wall more even and cuts down on the amount of in-fill needed. [Fig. 2]

The interior walls are stuccoed. However, since the wall is still not as smooth as most people would wish, and since a large amount of stucco would be required to fill in the really big voids that are left, you can place flattened aluminum cans in behind the stucco netting. Then, if you still have large areas (and you probably will on your first wall, but you’ll get better), fill in more spaces with mud. Yep, just plain ole’ mud ­ dirt from the site and water. It’s messy, but kinda fun, and it does dry and hold the cans in place. [Fig 3] Stucco as much as needed to make the walls as smooth as you want. We have used dry-wall mud as the final coat on our walls. Sand it down and paint. [Fig 4]

These houses were designed to face south to take full advantage of solar heat and light. The rooms generally measure about 18×24′ with a greenhouse area tacked on to the front of that. Our greenhouse is 10′ wide. [Fig. 5] The south wall is glass. The greenhouse planters are made from – surprise – aluminum cans. We have put a skylight in the back of each room and are working on making those operable. We have several small operable windows along the front so that a chimney-type airflow will be created from the lower south opening to the higher north skylight.

We decided to raise our dining room 12 inches from ground level and so needed a retaining wall. We used aluminum cans which were laid in brick fashion with a sand and cement mortar. The cans never touch each other since that would interrupt the integrity of the wall. The footing is cement with rebar and the outside will be stuccoed. [Fig. 6] The inside was filled with compacted earth topped with two inches of compacted sand. Bricks were laid directly on the sand. There is a step on each “side” of the wall. The center will be left open with an iron guardrail installed, which was welded together out of junk materials, by my husband, David. The steps are 2″ thick pine (packing wood) and sit on a tubular frame, also welded by David.

We are trying to use as many recycled materials as possible in our house. We spent the last few years collecting “stuff” ­ all of it good stuff, mind you. We have flat rocks and used bricks (free) for the floor, wood from packing pallets (free) in the furred kitchen wall, and aluminum cans (free) not only in the walls and planters but also for the cistern (a future project). We are using newspaper printing plates (very inexpensive) as a ceiling in part of the house, broken and discontinued tiles (free) for counters and the kitchen floor, drywall from a construction site for another part of the ceiling — you get the idea. And of course the tires were free.

Generally speaking, we are very pleased with the way our house is turning out and are about ready to spend our first winter there. As with any house, there will always be changes and additions as time goes by but it gives us something to look forward to every day. Now go build yourself a house, or a shop, a horse barn, or a garage. You’ll have lots of fun and get some good exercise, too.