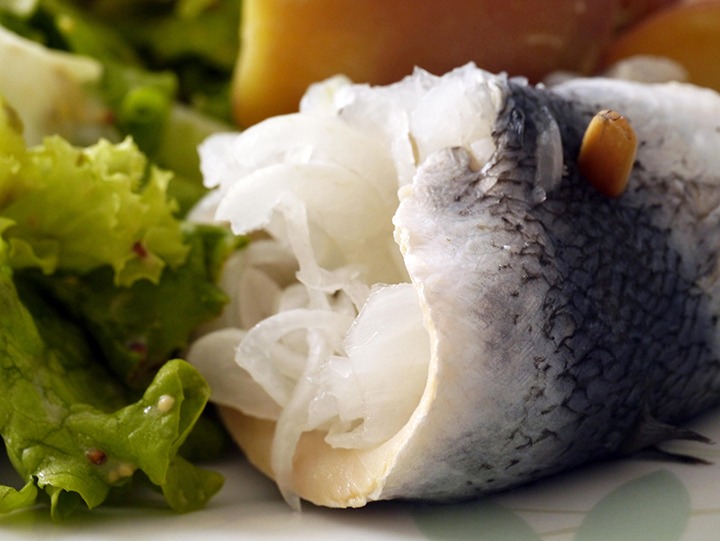 The zesty creations called rollmops (those mouthwatering appetizers that you buy in jars at the supermarket or by bulk in a deli) have deep European roots, but there’s a lot more to pickled fish than just herring.
Traditional rollmops, herring fillets wrapped around a small sour pickle and cured in brine, are as old as history dates. The term comes from rollen, meaning “to roll up” in German, and moppen, meaning “sour face” in Dutch.

Once considered an everyday staple, pickled fish today is ranked high on the list of gourmet delights. Commercial rollmops are rather pricey, but the good news is that any fish can be pickled and anglers who haven’t yet landed a catch in the crock don’t know what they’re missing.

Pickling is a safe and easy method of putting up fish for short term storage. Often when I have a fresh fish that doesn’t fit into the immediate menu or net a good buy at the fish market, I get out my crock and pickle the prize. This makes a delicious appetizer that saves up to a month, allowing it to be enjoyed in several settings.

Small fish are ideal for pickling in traditional rollmop fashion and nothing makes a better “mock” rollmop than plentiful smelt or other small pan fish. Larger catch including whitefish, perch, walleye, bass, and trout are succulent when pickled. Since skin is tougher on larger fish and flesh is usually too thick for rolling, the fish is best skinned, filleted, and cut into serving-sized chunks before pickling because acid in the brine helps break down and dissolve bones. Even the most discriminate can’t resist spicy suckers in the pickle jar.

There are two basic methods of pickling fish.

The old-fashioned way involves packing salted-down fish into a crock or jar and covering with boiling brine. If this method is practiced, modern day home-picklers are advised to freeze fish first for at least 48 hours in case tapeworms are present in the flesh. This method works great for previously frozen catch or store-bought frozen buys.

The other method, which was handed down to me from my grandmother, calls for gently poaching fish in boiling brine before putting into crock. This eliminates the need of freezing first, which allows fish to be pickled at prime. In the unlikely event that flesh contains parasites, heat will destroy them. I use this method for pickling fresh catch.

When pickling fish, use only high-grade distilled vinegar, course pickling salt, fresh spices, and earthen crock or glass jars as metal containers may cause discoloration or “tinny” taste.

Here are some interesting recipes to try.

In a glass bowl, combine 4 cups of vinegar and the salt and stir until dissolved. Submerge the prepared fish. Cover and put in fridge for at least 24 hours or up to three days. Remove from fridge, drain, and discard liquid. Rinse fish well under cold running water.

Put the fish chunks into an earthen crock or jars, layering with onion rings. In a saucepan, bring the remaining vinegar, wine, sugar, spices, and garlic to a boil. Taste and adjust seasoning, if needed. Let simmer 5 minutes.

Pour a bit of boiling pickling liquid over the fish, enough to take chill out of crock. Slowly add remaining liquid. Put a lid on the crock or seal jars and cool to room temperature. Refrigerate for at least five days before serving. Store under refrigeration for no longer than a month.

Serve pickled fish as an appetizer accompanied with thin slices of black bread, sour cream, and pickled baby onions. A glass of white wine and you’ve got it made.

Pat the fillets with paper towels to remove moisture. Lay a gherkin on the tail end of fillet or smelt, roll up tightly and fasten with a toothpick. Proceed until all pieces of fish are wrapped around a pickle.

In a pot, combine all the ingredients except the fish and bring to a boil. Reduce the heat and simmer 10 minutes.

Gently ease fish into the brine. Bring back to a boil. Reduce heat and poach 8 minutes.

Remove from heat and cool. Pour into crock or ladle into jars and cover or seal. Refrigerate for at least 3 days before serving in order for flavors to draw.

Serve rollmops with crusty bread sticks for a hearty snack.

If the fish is fresh, freeze 48 hours before processing. If frozen, you’re ready to roll. Cut into two-inch pieces. Place the fish in large glass bowl and set aside. In medium mixing bowl, combine the salt and cider vinegar and stir until the salt is dissolved. Pour over the fish. Refrigerate for eight days, stirring every day.

Drain and discard the brine. Rinse the fish in cold water to remove excess salt. Cover with cold water and put in fridge for three hours.

In a large pan, combine the white vinegar, sugar, spices, and lemon. Heat until the sugar is dissolved. Don’t boil. Cool then add the wine.

Drain fish and discard the soaking water. Pack fish into crock or jars, layering with the onion. Pour the pickling liquid over the fish. Seal the jars and store in the fridge. Let set for at least a week before serving. This saves up to one month under refrigeration. Makes about 4 quarts.

Note: In the olden days grandmother “put down” salmon and other fish in a crock without the use of a refrigerator and it sat in the cellar under brine for many months on end. However, home preservers today are strongly advised not to do it in the way of the olden days as spoilage could occur if cellar temperatures are not kept constant.