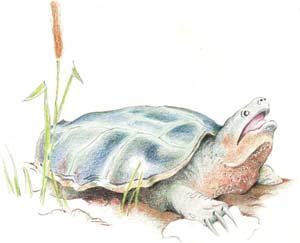 When the first of the snapping turtles roamed the lands during the Oligocene epoch in the Tertiary period of the Cenozoic era some 40 million years ago, they emerged onto a changing earth. Grass was sweeping across the continents and giant tropical forests were shrinking to the equatorial belts. And by most accounts mankind was less than human and still relegated to the trees. It makes one wonder how many species the lowly snapping turtle watched rise and fall.

In some parts of the United States it’s easy to take the snapping turtle for granted because they are so common. A lot of people in my neck of the woods consider them a nuisance as they can play havoc with waterfowl. I know from personal experience. But we’d often catch them as they crossed a road from one wetland to another, and when holding one it’s hard not to feel like you are holding onto an ancient wizened being even if they do seem slow and dumb.

The aptly named common snapping turtle has a wide range and can be found in southern Canada, northern Mexico, and west out to the Rocky Mountains. It’s thought that the snapping turtles survived the eruption of at least one supervolcano so its ability to adapt to changing conditions is not without precedent.

Here in Kentucky and throughout much of the south you’ll hear the saying, “meaner than a snapping turtle.” I’ve picked some up that couldn’t even be bothered to open their mouths or hiss and others snapped and squirmed and fought with reckless abandon.

One piece of snapping turtle wisdom is correct though; once their head is severed they can and will still snap for quite a while afterward. When I was about eight years old I experienced this firsthand. Our favorite fishing hole kept getting worse by the day one summer to a point where it was difficult to catch even a single bluegill (and we weren’t keeping any). In addition we would occasionally get hung up where there were no sunken limbs.

One day Dad got hung in this spot and pulled and pulled hoping to dislodge the hangup. The line broke soon after but not before a massive moss-covered head emerged and seemed to part the water. Later Dad set a trot-line with heavy tarred line and a large hook. He baited the hook with one of the few bluegills we were able to catch.

Only a day or so passed before we went back and Dad realized he had caught the snapping turtle but could not muster enough strength to pull it from the mud. This is a common tactic of snapping turtles. They will essentially use the mud to anchor themselves into place.

We enlisted the help (and .357 Magnum firepower) of a neighbor and soon they made slow progress in getting the turtle to shore. With much effort they were finally able to get the turtle up and get a shot off. The revolver barked and the turtle gave no additional resistance. 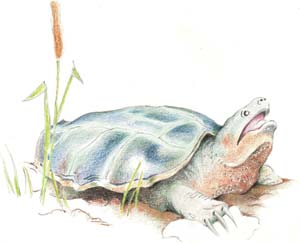 That turtle was large enough that eight year old me could have easily ridden on its back. But back to my point, which is, I still remember that with a lead slug in its head and being separated from the body, it was still snapping.

What makes snapping turtles so ubiquitous is their ability to live in just about any hole that holds water, mud, and something to eat. It may be difficult to tell if a pond or lake in your area has snapping turtles. It’s a safe assumption that if that piece of water is within their range they are either in the water or just haven’t found it yet. Occasionally you may see the turtles sitting on a floating or partially submerged log. Being cold-blooded reptiles, they like to sun themselves just as much as a snake or alligator would.

Their highly adaptive nature has made the snapping turtle a very opportunistic feeder. Though it will ambush prey  snapping quickly at any passing fish or small animal  they can and will eat other things living or dead. This includes just about anything that moves. Fish, turtles, snakes, frogs, salamanders, lizards, birds, and rodents are all fair game.

Catching a snapping turtle is not difficult except for the actual “catching” part. They will take most baits and hook themselves pretty easily. As long as you have a strong back or a few friends and a good dose of hardheadedness, it can be done. As always with harvesting wild game, be sure to check local laws and regulations and follow them.

Lately, the method of noodling for snapping turtles has gained a bit of fame with the introduction of the show “Wild Man” on NatGeo where one of my fellow Kentuckians demonstrated his ability to capture snapping turtles simply by feeling for them and then lifting them from the mud. This is inherently dangerous and most people of sound mind would not attempt this.

The best method is to use the same type of bank line that my dad used all those years ago. You simply tie a 5- to 6-foot length of tarred line to a tree limb, stump, or other immovable object on the bank, tie a hook on the opposite end, bait it, throw it out into the water, and check it every day.

The same juglines and trotlines I mentioned in an earlier article (Issue #124, July/August 2010) are also viable techniques as long as the lines and the location allow the bait to reach the bottom of the body of water. A jugline will help prevent the turtle from burrowing into the mud.

I’ve found the best bait to be a very small live bluegill. But chicken gizzards, pieces of beef, goldfish, and any number of different baits work well. The best bait for turtles needs to have a tough consistency, otherwise it will be easy to bite off the hook. The goal is for the turtle to essentially swallow the bait and hook whole. Hooking a turtle in the hard mouth would be an exceedingly difficult proposition.

Once you check the line and it’s clear that you’ve snagged a turtle, the process of pulling it up is simple but not easy. Slow steady pressure will eventually dislodge the turtle and once it is beyond the reach of mud or a solid foothold it will come up quite easily. Occasionally one will become lodged in hangups or vegetation and you have to make the decision to go after it (hopefully with some type of tool) or cut the line and your losses. But it’s best to make all efforts to harvest the animal as it will surely suffer and die with a hook lodged in its throat.

The best times to set your lines are almost always in the hottest parts of the year  mid to late summer and on nights with no moon. Snapping turtles are mostly nocturnal and hunt very well in the dark.

Another method of catching snapping turtles is by trapping them. I mentioned previously that snapping turtles, like most reptiles, like to sun by climbing onto a floating log. One could reasonably construct a trap that is nothing more than a welded wire (like used for fencing) cage closed in on four sides and the bottom. Around the open top put floats, logs, or any other buoyant surface that turtles can climb onto. Attach the floats securely to the cage. Either bend the wire inward into the cage or place some type of object that keeps the turtles from climbing back out. When the snappers go up to sun and then back into the water about half of the time they will dive off the wrong side and into your cage.

I used to shoot turtles as a young man with my .22 Hornet. First of all, this is not a great idea anywhere close to civilization (I was not) as ricochets are a real problem with shooting toward water. Secondly, it’s not a good idea because of the ancient reflex mechanisms in turtles. Even the one my dad’s friend shot with a .357 had quite active reflexes. Chances are even a mortal shot will result in the turtle burrowing into the mud and dying there.

Once you’ve captured your turtle you can begin processing the meat. The first step is removing the head. Place a broom handle or other hard object in front of the turtle and if it is still alive (or even recently dead) it will snap onto the object and hang on. Pull the neck out as far as it will extend and then sever it as close to the shell as possible. Allow the blood to drain out for an hour or so.

The next step is to cut off the claws and dip the whole turtle into boiling water. At this point you can attempt to remove the bottom shell and cut the meat away from the top shell but in many cases it will be easier to just make filet-like cuts to remove the tail and four legs. This keeps the guts intact as well. But the bottom shell can be removed and then the meat can be scraped and cut away from the top shell.

Then the cuts (neck, four legs, and tail) must be skinned. Debone the meat and cook as desired. The meat tastes quite a bit like chicken but the best use of the meat is by far in a turtle stew. There’s a reason why eating turtle meat is associated with turtle stew.

They may be somewhat less than lovable creatures but snapping turtles have a lot going for them. They are prolific in numbers, they are easy and fun to catch, and they are delicious. In other words, turtles are a great component to a homesteader’s bag of tricks when it comes to self-sufficient food.