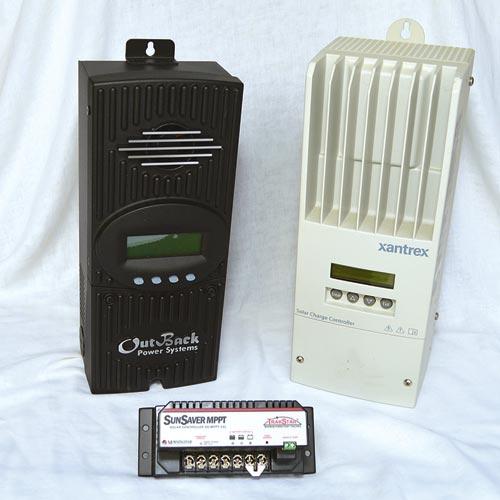 Most people with a basic understanding of solar power are aware they need a solar module and a storage battery to power an electrical device using the sun. Anyone facing a long car trip with a teenager also knows an inverter is a device that can produce 120-volt AC power when plugged into the car’s 12-volt DC utility outlet  which will power video games and DVD players.

In reality, a low-cost solar charge controller will limit the amount of solar energy being collected and transferred into the batteries, and this can be a significant system loss over the course of a year.

Solar charge controllers are available in many shapes and sizes.

Solar modules have a constantly changing power output due to the sun’s changing position for each hour and day of the year, plus the efficiency effects of ambient temperature and cloud cover.

Between these two given extremes on the I-V curve, the current will stay fairly constant as the voltage increases and the load changes until a point is reached where the curve starts to fall off rapidly. This point is called the “knee of the curve,” where the solar module is operating at a perfect combination of voltage and current to produce the maximum amount of solar power.

This maximum power point is referenced as Imp and Vmp on the graph’s vertical and horizontal axis. This voltage maximum point may not be the ideal charging voltage for the connected battery. If you change the amount of sunlight striking the solar module, this curve will move up or down on the graph scale, but its shape will not change.

In other words, an on/off type low-cost solar charge controller has to operate at whatever voltage the solar module output and battery load balance, which is usually not the voltage where the solar module would produce its maximum output. Another consideration is battery state-of-charge during this solar charging process. Most non-sealed batteries can take a very high rate of charging when nearly discharged, but require a minimum rate of charging when almost fully charged.

A high rate of charging amps will reduce the time it takes to recharge the batteries, which is an important factor when there are only a few hours of sun available each day. However, if this high charging rate is not reduced as the battery nears its fully charged state, the battery could begin to out-gas, or overheat, with damaging results. One way to avoid this problem of a constant charging rate regardless of battery state of charge is to upgrade to a pulse-width modulation (PWM) solar charge controller. Although basically still an on-off switch, it changes the frequency of turning on and off (pulses) the solar module’s output based on the battery’s state of charge.

This pulsing provides longer “on” periods of charging when the battery voltage is low, and more “off” periods as the battery reaches its full charge level. Many higher quality battery chargers utilize some form of pulsing the output charging voltage as this has been found to help reduce battery sulfating.

While a PWM solar charge controller greatly improves the battery charging process, it still cannot force the solar module to operate at the voltage and current combination that maximizes the solar energy available, and cannot provide the ideal battery charging voltage at the same time.

The most efficient (and expensive!) solar charge controller currently available is the maximum-power-point tracking (MPPT) solar charge controller. This type of charge controller includes programmable control software that constantly adjusts the solar module’s voltage and current, then measures how each of these minor adjustments affected the module’s output. This tracking process looks for the knee-of-the-curve on the I-V curve for the output of the given solar module as it seeks that combination of voltage and current that produces the most solar energy (watts).

Since a MPPT charge controller is constantly adjusting the voltage and current output of the solar module or array to maximize the power produced, this solar charge controller must also separately adjust the voltage and current going into the battery to maximize charging efficiency, minimizing charge time, and protect the battery from over-charging.

Unfortunately, unless you use extremely large (and expensive) wire between the solar array and the charge controller, there could be a large voltage drop in this long wire. At the extreme, it is even possible that the solar array voltage reaching the distant batteries could be lower than the voltage required to charge the batteries.

By using a high-end MPPT charge controller in our example, you could wire the four modules in series, resulting in a 68-volt (17 x 4 = 68) output at 5 amps. Although the total watts have not changed regardless of which way the four modules are connected, the higher voltage arrangement allows using a much smaller and less expensive wire back to the charge controller and batteries. By starting out with a higher array voltage, the voltage drop due to the resistance in the long wire will be much less of an impact on the voltage that reaches the solar charge controller. 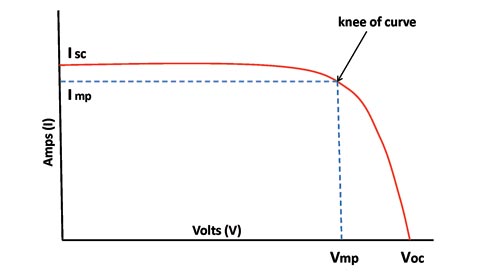 Since we are discussing charge controllers being used for backup and off-grid solar battery charging applications, I will limit this discussion to open wet cell lead-acid batteries and sealed AGM and GEL batteries. While there are many other types of battery technologies, most are not normally used in residential applications and may require a different battery charging process than I am describing.

I have investigated a bank of brand new and very-expensive sealed GEL cell batteries that were totally destroyed in a single day of overcharging. Therefore, if you are planning to charge sealed AGM or GEL batteries, be sure to select a solar charge controller having charging voltage settings for the type of batteries you are using.

The purpose of this stage is to put as many amps as possible and as fast as possible into a deep-cycle battery, while staying within safe voltage and temperature limits of the battery to prevent out-gassing or overheating. For most batteries and a properly-sized charging system, this stage usually takes one to two hours and should bring the battery charge level up to 80% full.

This stage is needed every few months, depending on the current age and the number of deep-discharge cycling the battery has experienced. This feature is only available on the higher-cost charge controllers. This charging cycle is normally used for open wet-cell batteries (removable fill caps). This process intentionally over-charges the batteries using a higher than normal charging voltage with the goal of forcing any individual battery cells that have dropped below the voltage of the other cells to come back up to equal the same charge level.

Since most cells will already be fully charged, this process will cause these cells to immediately start to bubble vigorously and discharge hydrogen gas while the underperforming cells are absorbing this extra charge. An equalize charge should not be performed on any sealed battery, and the equalize charging voltage should be according to the manufacturer’s charging guidelines for the specific battery.

The equalize charging process requires a manual start as a way to make sure it does not begin until the homeowner or service technician has: 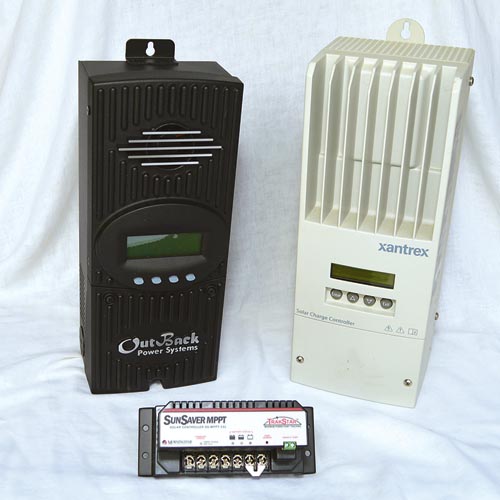 Some solar charge controllers are available with an optional diversion load control. This is common for larger off-grid systems when there are times of the year when the solar array is shutting off early each day after fully recharging the battery bank. Instead of allowing the remainder of the solar day to be lost, this solar charge controller feature determines when the batteries are fully charged and then diverts the remaining solar power to a separate load.

This is usually a low-voltage DC heating element installed near the bottom of a standard domestic hot-water tank. If additional heating is needed to bring the water temperature up to setpoint, this can be accomplished with the tank’s normal heating function, while benefiting from whatever preheating the solar power can provide.

Several models of solar charge controllers in the smaller 10-amp size range include additional “load” terminals typically used to power a DC light fixture or low voltage electronic device. These terminals will be disconnected from the battery any time the battery voltage drops below a predetermined low limit which protects the battery from damage. This feature is especially useful for those unattended solar applications in remote locations when the battery charge cannot be monitored. These load terminals are reenergized as soon as the battery has been recharged. Some solar charge controllers have load terminals controlled by a built-in timer which uses the solar module as a photocell after all solar charging has ended for the day. Once the charge controller determines that night is approaching, it activates the load terminals which turns “on” the connected DC light fixture or sign lighting. An adjustable dial for this timer allow you to select how many hours the light remains operating after activated.

All chemical reactions are affected by temperature, and this is especially true of the chemical energy conversion reaction taking place in a battery cell. I am sure most of us have experienced how a vehicle battery does not have the same engine starter power at 5° F that it has at 80° F, even though it was fully charged to start with.

Most manufacturers offer higher-cost solar charge controllers having a built-in or remotely mounted digital display. These data displays may show everything from basic array and battery voltages, to charging currents, energy produced, program setpoints, and even system warnings and alarms. Although this may be overkill on a small solar project, this type of display data can be invaluable on larger systems to monitor system performance over time and troubleshoot when there are problems.

It is estimated that 85% of all deep-cycle battery failures are caused by sulfation. This is the gradual build-up of sulfate crystals on the positive (+) internal battery plates which acts as an insulator to reduce the plate surface area exposed to the acid. By reducing the exposed plate area, this is the same result as reducing the size of the battery. Sulfation occurs when a battery is left at a very low charge level for extended periods. It is also a common problem in off-grid solar systems when the solar array is undersized for a given battery capacity.

Like all design projects, selecting a solar charge controller is always a compromise between charging efficiency, optional features, and cost.

In closing, please remember the above information related to selecting the right solar charge controller and suggested battery charging procedures are general guidelines and may not be correct for your specific battery or solar system. Be sure to follow all manufacturer charging requirements and safety guidelines for your specific application and battery.