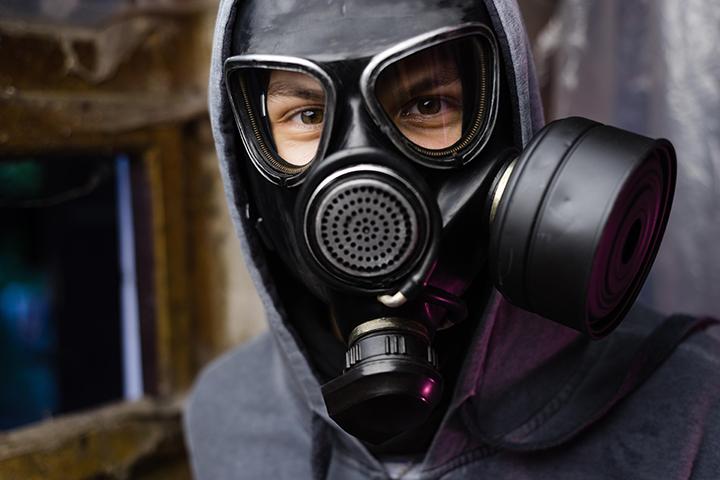 Three and a half years ago, on the morning of September 11th to be exact, I was just ending a White House tour with my husband, children, and four friends from overseas. We were evacuated, along with all White House staff, into Lafayette Square in central DC. The security guards who had been clad in suits on our arrival were now wearing Kevlar, and there were men with SAMs on the roof. We were being shouted at, “This is not a drill. Clear the area.” We drove home past the smoking Pentagon.

We all changed that day. Suddenly we began to look at things differently. I know I did. Is that a briefcase or a bomb? Would the kids know where to go if I couldn’t get to them? What would I do if a biochem cloud were coming my way? What is a hemorrhagic fever? How do I purify ground water? Does powdered milk go bad?

At home I started to prepare for whatever life could throw at me, whether it’s a terrorist attack, freak weather incident, fire, mugging, or an outbreak of disease. I don’t live in the backwoods. I’m guessing that people out in the countryside are better prepared than we suburbanites. After all, if you’re following Jackie Clay you must have canned fruit and veggies out the wazoo! You’re probably all tooled up with big guns, solar power, artesian wells, and more wood than you can shake a stick at. Well, where I live, in Northern Virginia, the neighborhood would pretty much grind to a halt if Trader Joe’s shut down.

So I set out to make alternative arrangements in case the world gets complicated, or just goes to hell. And why Self-Reliance for Women? Because women think differently, that’s why. We’re big on “what if?” questions. We like to be prepared. We like to have back-up plans. And we’re more than likely to be the ones that have to organize food, sanitation, and morale during an emergency. I want to know I’ll have enough calories stored away to cope with a super volcano erupting, enough fuel options to cook food in a power outage, alternative solutions for water purification, many ways to light and warm my homewhatever happens.

As I write this, a review of the government’s first response plans have just been judged woefully inadequate. Well, duh! Did we really think they’d get it right? Just look at the flu vaccine fandango. If they can’t get enough shots out into the community to protect our old and young folk against a predictable annual problem, how good will they be when there’s a real emergency?

So, since 2001 I have been collecting all sorts of information that might help me to protect my family and friends in an emergency. As I live 12 miles downwind of the Capitol, one of my big concerns is a biological terrorist attack.

Bioterrorism is the intentional use of biological agents, or germs, to cause illness. Biological agents include viruses, bacteria, fungi, and toxins from living organisms that have illness-producing effects on people, plants, or livestock. Toxins are poisons produced by living organisms and their synthetic equivalents. The effects of a biological agent disseminated in a public place may not be known immediately because of the delay between exposure and onset of illness. Those most likely to identify the symptoms of such attacks are the primary care physicians. School nurses or teachers may be the first to detect an illness from a biological attack in children. Among the biological agents of greatest concern are: anthrax, smallpox, plague, and botulism. A biological agent may be introduced to the system through the skin, or by ingestion or inhalation.

It makes no sense to me that we aren’t all offered an inoculation against smallpox. I for one would opt to have it. It is a terrible disease, with a 20-30% fatality rate, that scars and blinds its victims. It is highly contagious and we all know that vials of a lethal strain went missing with the break-up of the Soviet Union. How long before it ends up in terrorist handsif it isn’t there already? Vaccination takes a couple of seconds to perform (I know, I’ve had two). It’s a slightly uncomfortable scratch, and its effects last ten years. A 1968 study conducted in the United States involving over 14 million vaccinated people resulted in just nine deaths from all age groups and levels of immunity. Yet family doctors are not allowed near the government’s stockpile of vaccine. Surely, if most of the nation were vaccinated, the potential threat from releasing smallpox into our population would become irrelevant?

And remember, all the powers of Homeland Security couldn’t track down the Capitol Hill anthrax mailer. Three years later and we’re still waiting for an arrest. And this was finely milled, highly distinctive pharmaceutical grade anthrax produced in a place where people require high-level clearancenot some naturally occurring anthrax that came in from a field.

My advice: Stay home. Don’t touch your mail or newspapers. Wait it out. Avoid contact with other people and things they may have touched. During any type of bio attack, everyone should wash their hands frequently; avoid close proximity to an infected (or potentially infected) person. Isolate potentially exposed family members. If one member absolutely has to come and go, they should live separately from the others. Make sure you are thorough with cleansing; bleach surfaces, sinks, taps, toilets, etc. Boil-wash clothing that an infected person may have touched in disinfectant/bleach and soap. Avoid touching your eyes. These basic hygiene practices will greatly increase your chances of avoiding infection. Make sure you have weeks of suppliesnot days, as FEMA suggests. I recommend having at least a month’s supply of essentials. I always aim for at least two months. I’ll share my list of supplies and how to calculate the basic requirements that your family would need to survive in a later column.

Some biochem weapons are spread through human contact. Remember to drain standing water as it attracts mosquitoes, which can be disease carriers. Keep your house clean so that it doesn’t attract disease-infested flies, rats, and other creatures. You may even have to bury your dead. This isn’t as straightforward as you’d imagine, so I hope to cover this some other time.

Consider your own psychological state. Do not underestimate this. To endure a major biological attack you may have to cope with:

In crisis situations, interestingly enough, it often seems that those who survive are those who don’t give in to despair. In order to prepare yourself psychologically for any type of disaster, there are several steps you can take:

It might seem obvious, but the people most likely to survive a bio attack are those who are fit and healthy in the first place. If you have no health regime, ignore exercise, smoke and drink excessively and are either significantly over or under weight, then you are more likely to become a victim of a deliberately induced contagion. Even if you suffer from a medical condition such as diabetes, or asthma, the fitter you are the more likely you are to survive.

Keeping in touch with the outside world will be important. We are used to 24/7 news. However, most modern forms of communication rely on a regular power supply, which cannot be guaranteed in an emergency. An exception is the clockwork radio, now used widely all over the world where power supplies are erratic or absent.

For cell phones, there is a device that makes it possible for you to recharge your cell battery without main power. Called the SideWinder, you attach it to your phone via a cord that comes with it, and turn the crank, much like you would on an old-fashioned pencil sharpener. Two minutes of cranking creates about six minutes of talk time and significantly more time in standby minutes. If the SideWinder is cranked without being attached to a phone, it produces a small, white light, bright enough to read by. Turn the crank for 30 seconds and you will get five minutes of light. It costs around $25 and it’s guaranteed for life.

As for TV viewing, if the TV networks are broadcasting you might not get to see them if your signal comes in via satellite or cable. Consider a portable battery TV such as fans use at football games, or an AC/DC TV with a “rabbit ears” aerial that plugs into the cigarette lighter in your car. Relatively cheap and easy to run, these devices have proved their worth and it might be an idea to invest in one.

Maybe you didn’t know it but deer mice, cotton and rice rats and white-footed mice carry the potentially deadly Hantavirus. This causes a disease known as Hantavirus Pulmonary Syndrome (HPS), a very dangerous hemorrhagic fever. Although it is on the list of potential biochemical weapons, it is also becoming a reality in barns across America. Victims become infected by inhaling infected mice droppings, urine, or saliva in dust/aerosol form, often when sweeping or moving hay around. It is not spread through humans. Symptoms can take up to five weeks to appear and include a fever, muscle aches, nausea, and vomiting.

After these initial flu-like symptoms, victims experience shortness of breath and have coughing fits. The final stages of HPS disease include internal bleeding and breathing failure. Over 50% of reported cases of HPS have resulted in death. Although there aren’t many cases, it’s wise to keep your homestead rodent-free, as this disease appears to be on the increase in the US. Hantavirus can be killed by bleach, household disinfectant and UV rays, but you must be careful not to stir up the dust. The virus can live for two to three days at normal room temperature. If you have been exposed to rodent infestations and display any symptoms described above, see your doctor immediately.

Of course the big problem with biological threats, whether naturally occurring or from terrorists, is that either you are unaware a substance is being dispersed or you have very little time to react to it. However, there is a practical aid now available. It is a mask, small enough to fit easily inside a purse or briefcase and can be put on in six seconds. It filters out smoke and its related gases, tear gas as well as biological and chemical agents including anthrax, smallpox, sarin and cyanide. It’s called the Potomac Emergency Escape Mask. At around $125 it’s the perfect accessory for alert commuters in at-risk citiesand people with mice in the barn.

I hope in future columns I’m able to bring you some new ideas and solutions for dealing with emergencies. I also hope to share some of the things I do to teach myself how to deal with day-to-day threats such as personal assault and general stupidity. And I hope I can explain some of the self-reliantand often contrarianthinking that goes with it.