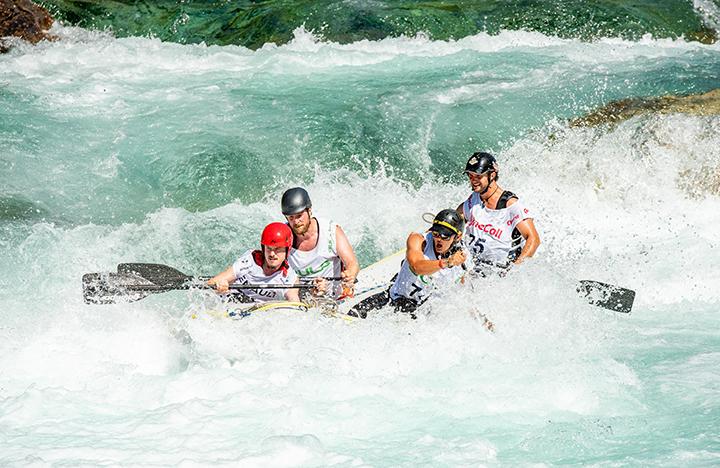 Years ago, while learning to sluice gold from a swollen mountain stream in southern California, I saw something that immediately sickened my stomach. The limp body of a young woman, face down, was floating rapidly downstream.

I ran along shore, trying to find a safe place to attempt rescue, but the water was too fast and deep, and it was freezing cold. Without a lifejacket, my own survival would be questionable. I finally gave up running, as the terrain made it impossible for me to keep up with the unconscious girl.

Luckily, another gold seeker, dressed in a wetsuit and dredging the river bottom, was about a half mile below us. He spotted the girl, pulled her out, and was able to administer first aid. Within minutes a helicopter landed and she was rushed to a nearby hospital where she fully recovered.

I didn’t know it at the time, but nearly half of all drownings related to swiftwater incidents are would-be rescuers. The statistics include good Samaritans like myself, as well as emergency personnel who may lack proper swiftwater rescue training and equipment, but feel compelled to “do something.”

I now live in Colorado near a river that is extremely popular among kayakers, whitewater rafters, and local kids who like to go tubing and swimming. Sadly, each year the river claims lives. The Arkansas River is the most heavily rafted river in North America, with over 62 rafting outfitters in the valley it runs through. A total of 656,223 people participated in some sort of river activity in 1999. Because of the shear numbers of people involved, drownings occur each summer, and most are preventable.

A case last year illustrates how treacherous swiftwater can be, even in relatively calm waters. A brother and sister team were kayaking a stretch of river that runs through town. This section rarely gets above a Class I or II in difficulty (the easiest). For some reason, the girl got out of her kayak and began wading across the river. She suddenly lost her footing and went down. As she disappeared under the water, her brother frantically tried to find her and help. At that moment, she was already drowning. The family called search and rescue and the girl’s body was eventually found, trapped underwater by a strainer. When her foot became lodged between an underwater tree branch and the river bottom, the force of the water pulled her under and she became trapped without the ability to surface for air.

The force of moving water is very deceptive. It’s hard to tell by looking at it how deep a flooded area is, or how strong the current can be. A flooded road that does not “look that bad” may have sufficient force to sweep a vehicle quickly downstream. The majority of deaths in flash floods occur when motorists enter unblocked but flooded roadways, or drive around safety barriers, enter a flooded area, and get swept away.

For people who love the outdoors, water is a magnet. For young children and pets, swift flowing water holds a mesmerizing effect. Statistics show that children 14 years and under are most likely to drown in wading pools, bathtubs, buckets, toilets, spas, hot tubs and swimming pools. Kids naturally like to explore, and when they find themselves too close to the edge of a flood-swollen river, stream, arroyo, or cement-lined flood control channel, tragedy usually strikes.

If you see someone fall into swiftwater, never enter the water to attempt a swim rescue. Do not grab a raft or boat and go after them either. You, too, will more than likely become a victim.

Throw the victim flotation: a car seat or a large, closed ice chest will work. Dial emergency and ask for swiftwater rescue teams to respond. Never tie a rope around your waist and enter fast flowing water. While this may result in a “lucky save,” more often than not the force of the water will pull you down, pin you there, and kill you. Furthermore, it will be nearly impossible for even the strongest person to pull you (and the victim) safely back to shore.

In flash flood country such as the desert southwest, motorists should be aware of potential hazards, even on sunny, cloud-free days. Although there may be no rain in your area, flash floods, mudslides, and debris flows resulting from storms upstream can be unleashed with little warning and quickly overtake you downstream.

Swiftwater can be very dangerous, even when depths are minimal. A 46,000-pound, fully loaded cement truck was swept down the Los Angeles River in less than two feet of water! Eighty percent of all fatalities in swiftwater are the result of drivers ignoring warning signs and entering clearly dangerous flooded roads or low water crossings.

Never drive into a flooded area, especially if the water is moving quickly. If your vehicle stalls in rapidly rising water and you can safely exit and jump to dry ground, do so immediately. Do not stay with your car. However, if the water is coming up too fast and is flowing very swiftly, or if you are too far out, do not try to swim out or wade over to dry ground. Six inches of fast-flowing water can knock you off your feet. Climb to the roof of your vehicle and call an emergency number if you have a cellular phone, or cry for help.

Nearly one-third of flooded roads and bridges are structurally unsound. You may not make it across safely no matter what kind of vehicle you are driving. Heavy military transport vehicles have been swept downstream in just two feet of water.

If you plan on camping in areas prone to flash flood, avoid pitching your tent in a dry wash. Choose higher ground and check weather forecasts frequently. Never try to outrun an oncoming flash flood down a canyon, arroyo, or cement-lined flood control channel. If you hear a sudden, loud sound upstream, exit your vehicle, leave your campsite, and seek higher ground immediately. You may have no warning by authorities and only seconds to evacuate to higher ground. Flash floods also occur at night, so bring a flashlight and other emergency supplies when you evacuate.

In an emergency situation, paddlers will sometimes be thrown from their boat. Swimming is the quickest form of self-rescue and may even be more safe than wading. If you capsize in big water, “defensive swimming” will be necessary. Large rapids and strong currents are too powerful to fight  even if you are a powerful swimmer. The objective is to ride out the river, conserving energy until an opportunity for self-rescue arises.

If you are rafting whitewater with a professional guide, they will tell you exactly what to do if you fall out of the boat. If you find yourself in very fast water, self-protection is a must. Face downstream and float with your legs bent in a bike-pedaling position. Arch you back and try to stay high on the surface. To look forward, don’t sit up  this pushes your butt deeper into the water. Instead, tuck your chin against your chest and look ahead. Don’t let the current get you sideways to the flow. This avoids tumbling in the shallows.

You can drown in big water even while wearing a life jacket. Save your strength and make the most of your breathing opportunities. Focus on swimming away from the most dangerous hazards and on getting the air you need. Steep ledges form big holes where hydraulic forces can catch a person and hold them in a powerful upstream current. A legs-straight, feet-first approach can lead to dangerous entrapment. Your best bet is to bend your legs when encountering large holes and tuck into a ball. Although you may hit rocks, the current at the bottom is actually going downstream and you should eventually pop out without getting sucked back into the hole.

As you continue to float down a section of rapids, anticipate calmer waters where you can attempt “aggressive swimming” toward a safe shore or protective eddy. Aggressive swimming in heavy whitewater takes the form of short, powerful bursts. To cut across the current, roll onto your belly and swim hard upstream, angling toward your goal. This is called a “body ferry.” Paddling across a river’s current is hard enough in a boat. But it’s slow, tiring work for a swimmer, so make sure you have the energy before making the attempt. Allow plenty of distance and time to make the move. Even if you can’t entirely swim to safety, using the body ferry may be necessary to position yourself on a safer part of the river to avoid nasty rocks or strainers.

Strainers are obstacles through which water flows, but paddlers can’t. Fallen trees, logjams, and manmade debris can form strainers that are highly dangerous. Victims can be caught in unseen traps underwater and pinned with tremendous force. Most strainer victims are found in a feet-up, head down position, suggesting that hitting the strainer feet first caused the entrapment.

Modern wisdom teaches to do all that’s possible to avoid a strainer, but if collision is inevitable, get on your belly and aggressively swim head first toward the strainer. When you make contact, start climbing over the top immediately, before the oncoming water has time to pile up behind you against your body. Grab on to whatever you can and fight hard to stay up. If you can pull your pelvis clear of the water, you’ve saved yourself.

Wading in a fast-moving river is sometimes necessary for self-rescue, but can be very risky. River bottoms and midstream rocks are unbelievably slippery. It takes total concentration and looking exactly where you are stepping to avoid a fall. Foot entrapment is a huge concern. Entrapment usually occurs when a swimmer tries to stand up in fast current and blindly thrusts a foot into the riverbed. Once the victim finds his leg caught in a crack between two boulders, there usually isn’t time to remove it. The current pushes him down, holds him under, and he drowns.

Avoid foot entrapment by maintaining balance and control while wading. If the current is too strong, keep swimming. Once the water slows, you can attempt to wade again. Take each step carefully, without lunging or scrambling. If your foot slips into a crevice, and you are not being pushed around by the river, you can usually remove it.

Wading with a paddle or tree branch provides three-point stability. Shuffle your feet side to side and maintain a constant two-point contact with the riverbed at all times.

A group working together can wade into water much deeper than a single person can. Team members not only support each other strength-wise, but by standing together they create small eddies that give their mates protection from the onrushing current.

If paddling a river is a “must” on your list of activities this summer, plan well, gear up, and think safety. Never take chances when it comes to fast-moving water!