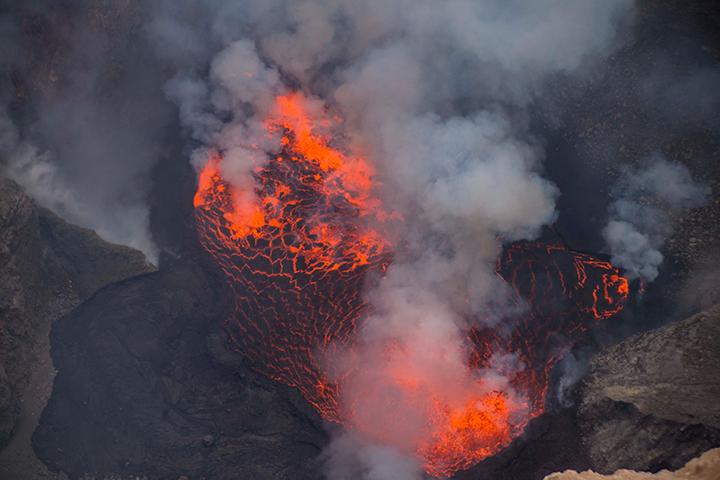 People love to talk about scary stuff. Especially when it’s end-of-the-world scary, such as the big asteroid recently in the news that was supposed to hit Earth and destroy all life, including human life. The big media morons went right along with this far-fetched prediction for the sake of a few more viewers and readers, but as usual the truth came out: Oops! Our calculations were off. The asteroid won’t hit Earth after all.

It’s not the first time an on-again, off-again asteroid was headed for Planet Earth, and it’s only one of many “doom and gloom” scenarios the news media likes to pass on to all us ever so gullible humans. Remember Y2K? Everyone went nuts, spending billions to plan for an imaginary monster. BHM, I’m proud to say, was one of the few honest media outlets who insisted from start to finish that Y2K was just a lot of hooey.

But now, today, as we open 2004, I’d like to tell you about a real possible doomsday scenario that is sitting under our very feet. It’s a volcano. Not just any old volcano like another Mt. St. Helens. That thing was just a firecracker. I’m talking about one that could end the world as we know ita supervolcano. And it’s inevitable.

Is there any evidence from geology that there have ever been any really catastrophic volcanos in the past? There sure is. There’s the volcano that formed the Deccan Traps, frozen lava fields in modern India, which were formed at the same time the dinosaurs checked out 65 million years ago and may have been the reason for their demise (and not an asteroid as most paleontologists seem to think, now).

And before that, some quarter of a billion years ago, the Siberian Traps were also formed by a supervolcano and nearly all life (96% of all species) on earth was obliterated. With the volcanic eruptions that formed the Siberian Traps, noxious gases and ash plunged the earth into a winter. But large amounts of greenhouse gases, such as CO2, also filled the atmosphere, and as the atmosphere cleared the earth entered a phase of intense global warming. It was a killer.

But that was then and the volcano I’m talking about isn’t going to be as big as those (at least we don’t think it will be), but it’ll be a big one when it goes off. And where is it? Believe it or not, it’s right here in the United States, smack under Yellowstone Park.

From the geological evidence, apparently it first erupted about 2.1 million years ago with an explosion that threw some 500 cubic miles (500 cu.3) of debris into the air. Mt. St. Helens, by comparison, tossed less than .5 mi.3 into the air, and remember how that looked? Ash came down in Iowa and it left behind a crater 50 by 40 miles, a depression larger than the state of Rhode Island.

In another major eruption 1.3 million years ago, 60 mi.3 of stuff went into the air. The last big one went off 640,000 years ago (200 mi.3.) In the meantime there have been smaller eruptions that have caused small-scale disasters. But it’s the big ones we’re worried about.

And when’s the next big eruption due? Well, it seems to go off every 600,000 or so years with the last one 640,000 years ago, so we’re due any time within the next 100,000 or so years. And the funny thing is, it could start tomorrow. And what would happen if it didtomorrow? Next month? A year from now? Here’s what scientists think:

In the next big eruption, magma will be thrown 30 miles into the air. Within a 600-mile radius most life will be obliterated by the explosion, falling ash, and lava flows. Within minutes perhaps millions will die. Grain production in the midwest will be obliterated in hours. The nation’s cattle, sheep, chickens, pigs, etc., will begin to starve. It will do no good to slaughter them because communications and transportation are going to break down and there will be no way to get the meat to market. They’ll just rot in the fields.

Think you’re going to bail out of this one by planting a garden in your backyard? Think again. Hundreds of cubic miles of volcanic ash thrown into the air will circle the earth, reducing northern hemisphere temperatures by as much as 21 degrees. A growing season will be practically nonexistent.

There will be no “living off the land” as almost all species will be pushed to the brink of extinction, and many will go over the edge.

Survivors from temperate climates will attempt to flee south, but there will be no more gasoline being delivered, so almost no one will make it any further than one tankful of gas. After that, you’ll walk.

Migration will be reversed as Americans try to cross into Mexico. But Mexicans will be having their own problems and we will not be welcomed. The balance of world power will shift to equatorial nations.

If it starts tomorrow, hardly anyone reading this magazine will survive. By the way, 71,000 years ago a supervolcano in Indonesia erupted causing worldwide disruptions. The skies darkened for half a dozen years precipitating an ice age that lasted about 1,000 years, driving many species to extinction and mankind to the brink. As few as 10,000 humans remained alive. And that wasn’t even a really big one.

So, what can we do to stop it? Absolutely nothing.

And here’s the catch: there are several more of these super volcanos around the world.

Now, do you want to worry about something else? In a future issue I’ll report on something else that’s interesting. While many are worried about global warming, some scientists believe we are already in the opening years of the next great ice age. Can you spell D-O-O-M?

Have a nice day.