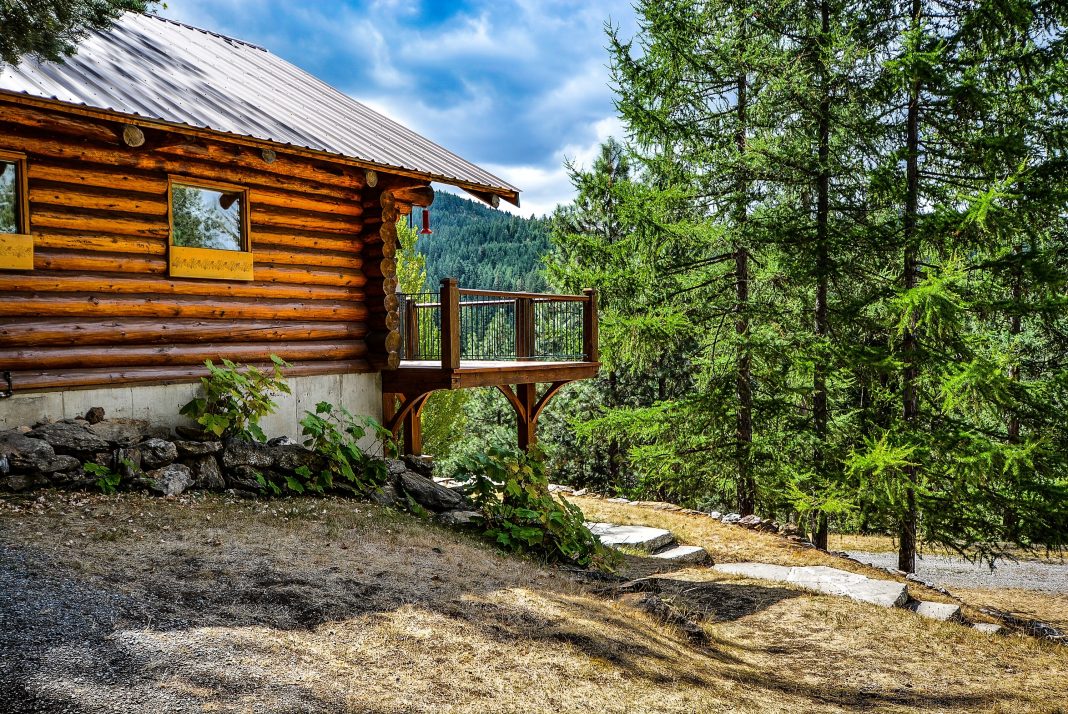 Blake McKinney owned several acres of beautiful deep forest wilderness along a fast-moving year-round fishing stream that was perfect for a planned weekend retreat. Mr. McKinney, an attorney in western Virginia, had purchased this property located along the Virginia-Tennessee border with the hope of building a small weekend cabin his family and friends could use away from the city.

He found the perfect plans for a 900-square foot, two-story lodge with a large open deck that would extend right up to the water’s edge. The cathedral ceiling living room with large wood-burning fireplace would become their entertainment center. Although the kitchen, dining area, two bathrooms, and three bedrooms were kept relatively small to stay within the small building footprint, they would still provide separation and privacy for friends and family wanting to “rough it.”

Building on a rocky valley floor along this ancient creek bed would not allow digging a basement, but the desire to keep above the level of low-land flooding resulted in building the first floor above a five-foot high crawl space. Although not high enough to stand up in, the added concrete floor and access door provide a good dry storage area for all that fishing gear.

The McKinney family wanted to keep the rustic feel of the original forest, so the house site was selected to avoid cutting any large trees, and the undisturbed heavy ground cover of pine needles assured that Blake would not be doing any yard work. As all good intentions go, however, there was a very big problem with this plan, which is what got me involved in the story.

Their property was one of the many old homesteads that became “land islands” years ago when the National Forests were created around them, so now the thousands of acres of restricted public land use has effectively blocked all utility line access. This would mean no all-electric kitchen, no central HVAC system, no major appliances, and no video games. When I first met Blake, the cabin was almost completed on the outside, but the electrician had stopped all work since there was no utility power for him to connect.

Anything can be powered by the sun in my work, but when I visited the site for the first time it was obvious the location at the base of a high mountain range blocking the south exposure and nestled among extremely tall pine trees told me any serious solar power system was out of the question. It was determined that a generator would be required, but nobody wanted to hear one operating constantly all weekend.

We decided the best solution would be a hybrid power system, having all 120-Volt AC appliances powered from a Trace 4 kW sine wave inverter, with the inverter connected to 12 industrial L-16 size batteries wired in series-parallel to provide a 24-volt DC output.

An insulated plywood battery enclosure was built around the battery bank in the crawl space that includes an outside vent pipe to exhaust any battery gasses generated during the charging process. We selected an 8.5 kW Kohler 1,800-RPM propane fueled generator to charge the batteries, and a large underground propane tank would provide months of maintenance free fuel. It was possible to use a smaller generator, but the higher amperage capacity of this generator provides faster battery charging and longer quiet time between charging.

The south-facing roof only had enough unshaded area for a small 150-watt solar array, barely enough to offset the battery bank’s self-discharging during weeks of un-occupancy. The limited sun hours each day would be partially offset by the many days between cabin occupancy.

Blake and I agreed that for this concept to work, he must purchase the most energy saving lights, appliances, and HVAC systems available; otherwise, his generator would need to run continuously. Although I designed the home’s power system and supplied all of this equipment, a local electrician provided the actual equipment installation and wiring. After the installation was finished, we provided the system startup service and programmed the inverter to maximize the generator powered battery charging process.

All lighting installed was compact fluorescent and T-8 tube high efficiency fixtures with full-color spectrum lamps. Realizing that the inverter would shut down anytime the battery voltage dropped too low during these long unattended periods, we decided to install a few 24-volt DC lighting fixtures at key locations including stairwells, corridors, and over the system control panel. This would provide basic lighting until the generator was restarted to bring the cabin back to life. Nobody wanted to have television or video equipment during these get-away weekends, and the cool deep woods guaranteed air conditioning would not be needed. The large fireplace would provide all required heating, but hot showers and a fully functioning kitchen would be mandatory.

We decided the long unoccupied periods would make a conventional hot water heater impractical even if it was supplied from the large underground propane tank for the generator, so we installed an AquaStar instantaneous propane hot water heater. This 125,000 BTU hot water heater can heat a continuous 2 gal/min flow of 50-degree ground water without any storage tank instantly up to 140 degrees for as long as you keep the faucet open, and will still shut-off the instant the water flow stops. I have seen this same unit supplying scalding water for two simultaneous showers in the dead of winter.

We had intended to utilize this water heater to also heat a small piping loop of baseboard hot water radiation around the perimeter walls of the ground floor rooms, but decided the potential for pipe freezing during long periods of unoccupancy was too risky. Since the large fireplace would provide the serious heating during occupancy, it was decided to install a small in-wall forced air propane heater which included a small supply duct down under the floor to also heat the water piping and storage battery areas.

Although intended to operate only long enough to take the initial chill off the cabin until a fire could be started in the fireplace, a low limit thermostat allows the heater to re-start if near freezing temperatures are reached inside the cabin or around the heavily insulated battery box in the crawl space.

Now that these lighting, heating, and hot water issues had been resolved, it was time to tackle the kitchen. A modern four-burner gas stove and oven was ordered with older design pilot lights instead of complex electronic controls and high-energy usage electric glow plugs. This would solve the cooking issue

Now for the refrigerator. Since they will bring the refrigerated foods and drinks needed each weekend, keeping lots of foods cold for long periods was not necessary. We also realized the refrigerator would be the largest energy using appliance in the cabin and we didn’t want to operate the generator during weeks of un-occupancy just to keep a few things cold. We decided to install a 24-volt DC Sunfrost 12 cu. ft. refrigerator freezer.

This is the most energy efficient refrigerator made and its heavily insulated walls insure the small dual compressors will operate much less than a conventional refrigerator. We chose this DC model since it could be powered directly from the 24-volt battery bank, avoiding the need to operate the inverter with its associated standby losses during long periods of unoccupancy.

The final issue was to decide how this system would be controlled, since the intent was to provide a home away from home without spending the weekend servicing complex electrical equipment. A remote system monitor and inverter control panel were installed near the front door. This control system is capable of fully automatic operation of the generator and the battery charging process; however, it was decided to not operate the generator in automatic mode when the cabin is not occupied since any generator starting problem would not be observed and could damage the generator.

Upon first arrival, a check of the display panel may show the solar maintained batteries are still low and in need of charging. By manually pressing a button on this display panel, the generator is started and the inverter comes to life putting as much charge as possible back into the batteries. Since it will take this generator about three hours to fully recharge the batteries, this is the best time to operate any high-energy usage appliances like the warm up gas furnace, kitchen appliances, or power tools directly from the generator. By nightfall the batteries will be recharged and the inverter will shut down the generator for a nice quiet evening.

Depending on how long the cabin was unoccupied and the current weather conditions, it may be possible to go through the entire weekend without restarting the generator. However, it is a good practice to bring the batteries back to full charge just before “check out” time. Hopefully, with enough sun, the small solar array will offset the standby battery losses and the electrical usage of the DC refrigerator until the next weekend or holiday visit.

More and more people are buying rural property to have a retreat from city life, but still want the comfort and labor saving conveniences of modern appliances. If you are buying property in an area not served by utility lines, perhaps a hybrid solar-generator-battery power system will fit your needs too.

Start your food storage on $10 a week