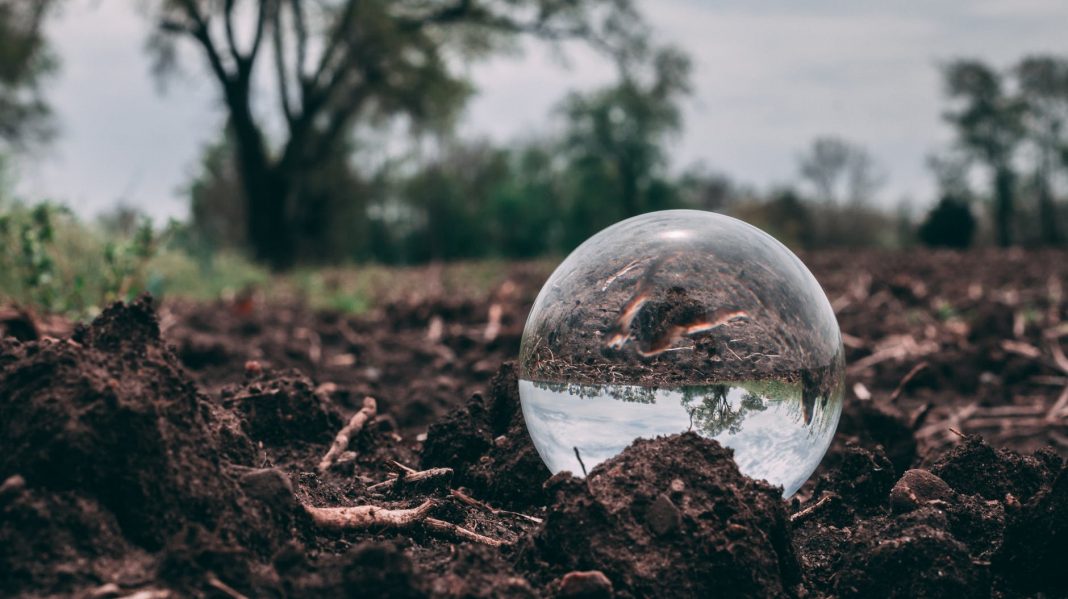 For some people, home gardening is an expensive pursuit, which seems a bit backward to us. At one time, people gardened because home-grown produce was far better and cheaper than anything from the store. And every farmer some 50+ years agowhether a farmer of large acreages or an urban backyard farmer, knew that to produce healthy plants, you had to improve the soil. If the soil is weak, your plants will be weak and subject to insect infestation.

There are many low-cost methods for making your own fertilizer. One of the easiest and best is manufactured from seaweed.

We learned a lot about the beneficial properties of seaweed from Ernest Hogeboom, who used to be a professional gardener in the Pasadena, California, area. Hogeboom would collect several plastic trash bags of kelp from areas along the Pacific Coast. He would empty the kelp into a 55-gallon drum, fill it with water, and then cover it. As the seaweed began to decompose, the water would turn brown. Within about two months, the seaweed was fully decomposed. This liquid was used as a concentrate, which Hogeboom would then dilute with water before spraying it on or pouring it around his customers’ plants.

We’ve used this for our own garden service clients, with the addition of fish emulsion. Plants sprayed with this mixture seem more insect repellent, and generally show some renewed growth. The only pitfall is the fishy, oceany odor that is detectable for a day or two after the application. 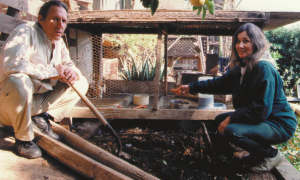 The authors with their earthworm compost pit, to which their rabbits contribute by direct deposit. (Photo by Raul Castellano.)

Seaweed is a rich source of potassium up to 12%. Though seaweed contains many trace elements, it is relatively poor in nitrogen and phosphate, which is why the addition of fish emulsion makes a nearly perfect fertilizer. Also, rather than use the heavy and bulky 55-gallon drum that Hogeboom used, we purchased a plastic trash can at a building supply store for under $10. This has served us quite well.

Another of the easiest fertilizers to make comes from an earthworm compost pit. You add kitchen scraps, grass clippings, leaves, etc. into the pit, and as it is processed by the earthworms, you soon have a rich, black garden amendment. Adding compost in volumes of about 10% into your garden is generally all that is needed to increase the health and insect repellency of your trees, vegetables, and other garden plants.

Though composting is the epitome of simplicity, there are a broad variety of containers that you can make or buy. Sometimes decomposition does not occur properly if you have used too much of one ingredient. For this reason, we suggest you research composting in a good book, such as Rodale’s Encyclopedia of Organic Gardening. BHM has had some good articles on the subject, too.

When it comes to animal fertilizers, the best readily-available fertilizer is rabbit droppings. Rabbit droppings have the highest nitrogen content of any of the commonly available barnyard manures, such as cow, horse, pig, etc. Rabbit droppings are small, compact, and nearly odorless. One organic gardener described them as “miniature, time-released, fertilizer capsules.” If you raise rabbits, or know someone who does, you’ll have a source of one of nature’s best natural fertilizers.

We have our rabbit friends living atop our earthworm compost pit. Rabbit droppings can also be called “earthworm caviar.”

The fertilizer provided by our earthworm compost pit is about the best you could find anywhere, and it’s “free.”

If you’re in the habit of buying all sorts of liquid fertilizers and other commercial treatments for your garden, you may be happy to learn that at least two commonly discarded kitchen scraps are ideal for many of your garden plants.

You’ve heard of “liming” the garden and lawn, right? Most people buy a bag of lime (calcium carbonate) every few years and sprinkle it throughout the garden. Were you aware that eggshells are 93% calcium carbonate? 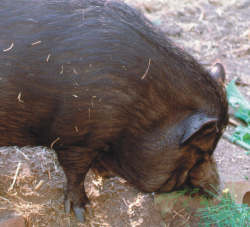 Otis the pot-bellied pig lives in the authors’ yard. A pig in the yard is a great source of fertilizer.

In addition to the calcium, the eggshells contain about 1% nitrogen, about a half-percent phosphoric acid, and other trace elements that make them a practical fertilizer. Calcium is an essential plant nutrient which plays a fundamental part in cell manufacture and growth. Most roots must have some calcium at the growing tips. Plant growth removes large quantities of calcium from the soil, and calcium must be replenished, so this is an ideal way to recycle your eggshells.

We save our eggshells in a pan in our oven. The pilot light temperature slowly dries them out. Then we crush them by hand and powder them in the blender. The powdered eggshells are then placed around fruit trees, in potted plants and roses, and broadcast throughout the vegetable garden.

You can also solve your snail problems with the help of recycled eggshells. Instead of powdering the shells, use them at the hand-crushed stage, with plenty of rough, sharp edges. Scatter the crushed shells in circles around those plants that the snails are eating. Since the shells cause discomfort to the snails, they nearly always retreat and do not cross the shell barriers.

(Did you know that our California brown snails are actually escaped escargot? One method of “control” is simply to eat thembut that’s another story.)

…or those coffee grounds

Another commonly discarded kitchen item is coffee grounds. Coffee grounds can be particularly useful in the garden, or, at the very least, added to your compost pile. 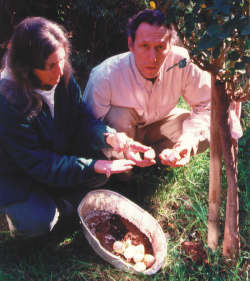 Dolores and Christopher scatter coffee grounds and crushed egg shells under their roses.

Used coffee grounds contain about two percent nitrogen, about a third of a percent of phosphoric acid, and varying amounts of potash (generally less than one percent). Analysis of coffee grounds shows that they contain many minerals, including trace minerals, carbohydrates, sugars, some vitamins, and some caffeine. They are particularly useful on those plants for which you would purchase and apply an “acid food,” such as blueberries, evergreens, azaleas, roses, camellias, avocados, and certain fruit trees.

We dry our coffee grounds in the oven, too. Then we scatter them lightly, as a mulch, around those plants which we feel would benefit from them. We don’t scatter them thickly when they are wet, because the coffee grounds have a tendency to get moldy.

The growth of plants that like or need lime (which we can provide with eggshells) can be stimulated by adding a mixture of ground-up eggshells and dried coffee grounds.

Smile the next time you drink your morning cup of coffee and eat your breakfast of eggs, since the by-products of your meal are ideal for your urban garden, and need no longer be “kitchen waste products.”