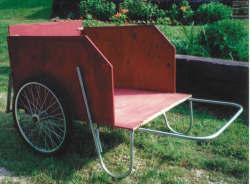 I don’t know too many homesteaders, gardeners, or small farmers who haven’t at one time or another wished for one of those fancy big-wheeled garden carts. It seems that there is always something that needs to be toted around on the place, be it hay or straw, rocks, firewood, garden tools, plants, compost, or whatever. Think about it for a bit, and the need for a hand cart on your own place will probably become evident.

Well, being the basic cheapskate that I am, when I finally decided that I was going to have one of the carts, I figured that I could save some money if I built it myself. 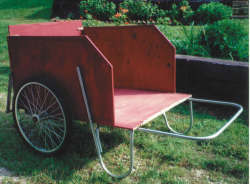 I have a friend who had taken the plunge and bought one of the carts from a commercial outlet, so I took the liberty of snapping a few photographs of some of the structural details which I wanted to replicate. Afterwards, a half hour or so was spent with a pencil, paper, and ruler to come up with the rest of the plans, as well as the measurements for making the cuts for the cart body from a single sheet of 1/2-inch plywood.

So, with a good fire going in the stove in the workshop, I set about to come up with my own version of the garden cart, the Copy Cart.

I purchased the wheels for the cart from Northern Hydraulics in Burnsville, MN. They have a big mail order business for all sorts of tools, parts, and equipment. (If you don’t receive the almost too frequent catalogs from Northern Hydraulics, phone 1-800-533-5545 to get on their list.) I selected the 26-inch pneumatic-tired wheels for use on my cart. They are on roller bearings and made to take a 3/4-inch axle. For the axle I purchased an ordinary 3/4-inch iron rod from a buggy factory in the nearby Amish settlement. 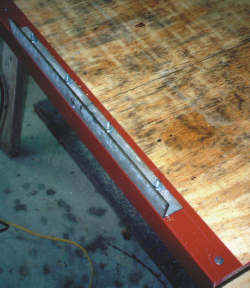 I planned to cover the edges of the plywood pieces with metal to prevent splinting and to prolong the life of the panels. For the metal sheathing, I again journeyed over to the Amish settlement, this time to a business specializing in post building and metal construction. There, I had the metal shop do a little custom bending on some ‘seconds’ and leftover pieces of heavy gauge roofing metal they had available. Soon they fashioned the metal into pieces of angle-stock 2 by 2 inches by 8 feet and some into U-channel 1 by ½ by l inch by 8 feet. The 2 by 2’s were used on the corners for strength and durability, and the U-channel was used to cover the cut edges of the plywood. All of the metal was secured with either long shanked pop rivets or with small carriage bolts.

The axle was attached by cutting 3/4-inch holes into two pieces of an old bed rail. The heavy metal added strength to the cart bottom and the pre-cut holes where the bedsprings had once been attached provided ready-made holes for attaching the rails to the cart bottom with short 1/4-inch carriage bolts. The axle is positioned so that the leading edge of the wheel is only a couple of inches from the front edge of the cart itself. This provides a very good balance for hauling and is handy for tipping the cart up to load bulky articles such as barrels or large boxes. 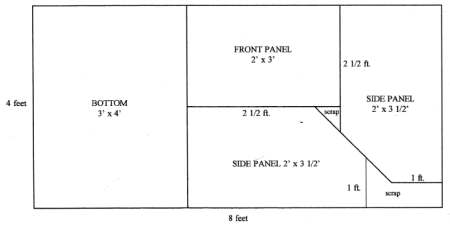 All the panels needed for the cart can be cut
from a single 4 foot by 8 foot sheet of ½ inch plywood.

The cart handle and stands were made from 3/4-inch electrical conduit bent with a conduit bender. I admit, it took some head scratching for me to figure out how to make two pieces with the conduit bender which needed to be nearly identical. But with some measuring, checking, eyeballing, remeasuring, and rechecking, the stands, as well as the cross-brace, came out really well. 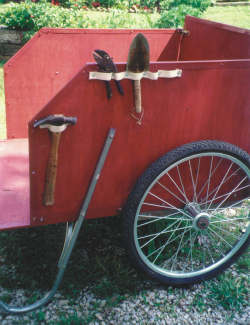 I wanted to duplicate the general style of the opening system on the front gate found on the my friend’s cart, but lacked the hardware which is used in the store-bought version.

So, to the junk boxes I went. I came up with two ordinary door slip-bolts. As you can see from the photograph, I attached one to each side of the end gate near the top. When each bolt is set to protrude, they are situated in reinforced holes near the top front corner of the side panels. I drilled a small hole near the end of each bolt and used a small clip pin to hold them secure. This prevents the side panels from splaying outward, and allows the end gate to swing from the top, enabling compost, dirt, or whatever to be dumped out the front, similar to the way a dump truck works. If I want the end gate secured at the bottom, two more of the slip-bolts will hold it in place. As soon as I scrounge up a couple, I’ll add them.

Another addition to the cart are the tool loops. I added these to the outside of the cart for carrying pruners, trowels, and other hand tools. It keeps them visible and in one spot until needed. Some scrap of nylon webbing was secured to one of the side panels using small bolts. Washers keep the webbing from pulling off of the bolt heads. A piece of an old leather belt should work just as well. 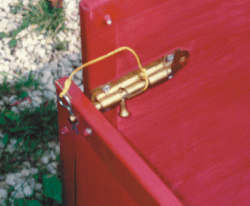 Most of the bolts, screws, and assorted small hardware were scrounged from my own collection or from my Dad’s gigantic accumulated hardware collection. I had some red paint left from repainting my barn, so the cart was given a good coat of the preservative. By buying new plywood, wheels, and conduit, as well as the axle, sheet metal and long-shanked pop rivets, I ran the cost of my cart up to around $80. Still, that amount is considerably less than a new commercial version of a similar cart. This custom version is also about 6 inches wider than the commercial model and has side panels about 6 to 8 inches taller as well. For those, I just used what I had. The diagram, however, shows how every piece of wood needed for the cart can be cut from one 4 by 8-foot sheet of plywood.

Our homemade Copy Cart has proven to be one of the handiest and most useful tools that I have on the place. In fact, we were using it to haul bales of straw in before it was completely finished. Since its completion, I’ve hauled concrete blocks, some split firewood, old bedding from the chicken house, and some hay bales. Of course, the kids had to have a ride in it as well. 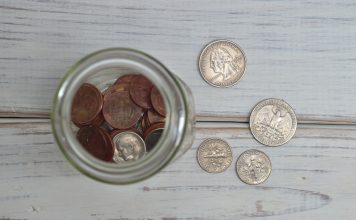