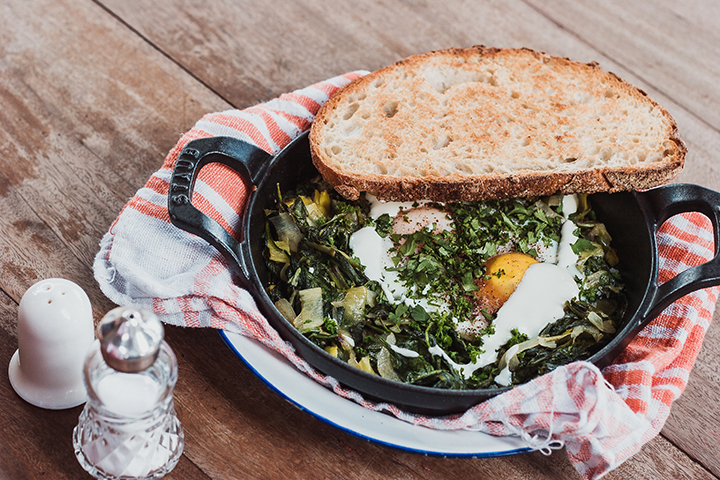 Most people know about sourdough starter—it can be used instead of yeast to make bread rise, resulting in bread with a sour flavor and a chewier texture. Bakers who use starter always save a little bit for next time. This little bit of starter is fed flour and water, and it grows into more starter, enough to use in the next batch of bread.

What is starter? And where does that first little bit come from?

Bread rises because tiny organisms in the dough are performing fermentation—absorbing sugar from the flour and processing it into gas and flavorful organic molecules. In commercially made bread, these organsims are yeasts, members of the fungus family. In starter, a population of bacteria and wild yeasts (different yeasts than those sold in the store) are thriving on a regular diet of flour and water. When this starter is put into bread dough, the bacteria and yeasts readily go to work processing the sugars in the dough; no commercial yeast is needed. In addition to the usual fermentation products, the bacteria produce acids that give the resulting bread unique flavors.

To get that first little bit of starter, a mixture of flour and water is left out. Bacteria and wild yeasts from the air move in. With regular feeding, they can become a stable population, strong enough to make bread rise. In addition, once the starter is stable, it can survive in the refrigerator and be fed only once every few weeks. Creating a starter is not a walk in the park. The bread-making bacteria struggle to gain hold; sometimes, bad bacteria take over. But the process is doable, especially if you know the pitfalls to avoid. And the reward of making bread with your very own starter is well worth the effort.

Two key factors for the starter’s survival are cleanliness and temperature. Make sure all your tools are clean—container, mixing spoon, measuring cups, and hands. Then rinse them, with baking soda and water—this will wash away any residue left by soap. Use your hands to rinse them, not a sponge that might have lingering soap or grease. A temperature around 70°F is ideal for starter making. In the winter, you might leave a lamp on over your starter. I once used the cabinet over a fluorescent light, which warmed up nicely when the light was on.

In addition, you will need to feed your starter every day until it becomes stable—this can take up to two weeks. Pick a time of day when you will be home.

Use a see-through container that is big enough for the starter to double in size. Marking the original height of the starter helps you monitor how much it has risen. A loose-fitting lid is important because the gas produced can cause a tight lid to burst open. A simple solution is a “lid” of plastic wrap and a rubber band. Keep the starter in the same container for the entire process—there is no reason to keep exposing it to new containers. Finally, use bottled water if your tap water contains chemicals, which can hurt the growing bacteria population.

The recipe begins with a mixture of rye flour and water. The rye flour contains additional sugars that help the bacteria get started. With rye flour, the mixture will easily rise. The feedings change gradually from rye flour to white flour—I found that a sudden change usually killed the starter. As white flour is used, the starter will rise less. Look for bubbles, a sign of life in your starter. A fruity smell is also good. Check your starter a few times throughout the day—sometimes it rises quickly and then falls, so it might appear not to have risen at all. Once the starter is 100% white flour and rising regularly, the recipe for feeding changes to give a less watery, more dough-like starter.

To maintain the starter, keep using the “Dough-like starter feeding” recipe. Use your refrigerator to slow the rising; this way, you can feed the starter less often. After each feeding, leave it out for three hours and then refrigerate it. Most people feed their starter once a week. You can wait two to three weeks, but before you make bread, you should feed the starter and leave it out to rise. Once it is risen, then you can make bread with it. The extra feeding ensures a good population of bacteria, ready to make your bread rise. Making bread that rises is the ultimate test of success in creating a starter.

Make sure the flour is not packed into the measuring cup—this will make your dough hard to knead and your bread dry. Mix the flour, starter, and water with your hands until there are no dry spots. Cover the mixture and wait for 30 minutes. Add the salt and knead your dough until it is flexible—you can stretch it without ripping it. When it is fully kneaded, put it in an oiled, covered container to rise. When it is full of gas, if you have time, punch it down, fold the sides over, and let it rise again. Next, cut it into two pieces and shape them into rounds, tucking the edges under to create a smooth outer surface. Place them on a floured surface, cover them, and put them in the refrigerator. The next day, preheat your oven to 460°F. Pull the rounds out and let them keep rising. They should be full of gas when they go in the oven. Slash the tops with a serrated knife to help them open up in the oven. Use your hands to wet the surface of the loaves just before they go in the oven. Bake for 25-30 minutes.