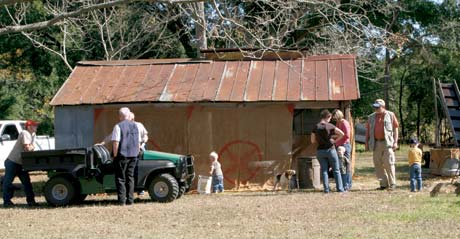 In the syrup house on Roger Clark’s farm in Suwannee County, Florida, three generations of his family gather around a vat big enough to make a good size toddler swimming pool in a public park. It smells better here, though, because the family is cooking sugar cane to make a traditional Southern treat, cane syrup.

Roger Clark, patriarch and de facto head of the operation, explains how it works.

“To make cane syrup,” he says, “sugar cane is ground down until you have a juice. Then the juice is boiled down. Taking the water off concentrates and concentrates it until it’s thick enough to be a syrup. We grind 80 gallons of juice at a time, which will cook for approximately four hours, that will make roughly 12 gallons of syrup per batch.”

Backwoods Home asked Roger for a little history on this regional product of the Deep South. He replied, “It started back years ago when farmers in this area didn’t have any money, and that’s how they got their sweets: from sugar cane products they grew on their own farms. My wife Brenda’s granddad, Furnie Terry, was cooking it on his farm down the road long before she was born. Brenda’s dad, L.C. Terry, started cooking it here around 1955, give or take a few years. L.C. did it as part of a cash flow thing for his farm because he was a full-time farmer. He would cook for two weeks and finish up with the bottling and such the third week. His syrup was shipped down into Tampa and different places.”

Roger’s wife’s grandfather had made cane syrup as a “cash crop” product to help feed his family during the most drastic economic times in 20th century America. His children were a generation that had the Great Depression fresh in their collective memories, which is why even in the “Golden Fifties” Roger’s father-in-law produced cane syrup as a cash supplement for his working farm.

Today, Roger reminisces, “When L.C. passed away, we started doing it just to keep it alive. It was a family tradition, and a regional tradition, really. It’s something our whole family enjoys and looks forward to every year, young and old alike. Not many are doing it anymore, but a few more are coming into cane syrup-making now.”

Is it profitable? Roger sees that as situational. “For me,” he says, “it’s a family tradition more than anything else. We don’t always make enough money off it to pay for the LP gas and the syrup bottles. There’s a lot of time involved, stripping and topping and all of that, and it’s just not that profitable. For Furnie and L.C., sugar cane derivatives were sometimes the only sweets that impoverished farmers could afford. Sugar cane back then would be crystallized out to make a rock candy. And the syrup went on almost everything! Biscuits, meat, you name it. Nothing tastes quite like a bit of cane syrup on a good piece of ham.”

Cane syrup has a taste all its own. Notes Roger, “Some compare it to molasses, but I don’t think it tastes the same at all. Cane syrup is just a unique flavor of the South. Some folks add corn syrup to their cane syrup. That makes it go farther. Some feel it makes the shelf life longer, too, but I have my doubts about that. Our family still uses some cane syrup that Brenda’s dad cooked in the ’80s that’s still good, though it’s dark as motor oil. The older cane syrup gets, the darker it gets.”

Cane syrup can be bought in stores in the Deep South, but true Southerners want to buy theirs from someone they know who produced and bottled it themselves. Of course, some thought must be given to the key ingredient.

“We have just half an acre of sugar cane,” explains Roger. “Out of that, we can make three good runs of eighty gallons each, maybe more, depending on the year and the crop. This year was a dry year, and there was less.”

Someone dreaming of becoming the next agribusiness King of Sugar Cane would do well to look into some other products. While L.C. Terry was able to make money at it and make it part of the income stream of his family farm “back in the day,” Roger Clark sees cane syrup-making as something else. The cases of syrup from each run are set aside as gifts for family and friends. The making of it is something close to a bonding ritual. “It’s a family effort,” Roger says simply.

Yet watching the cane juice boil as everyone around the vat, from the elderly to the little kids, laughing and sucking on sweet sugar cane, it’s good to know that such traditions are being preserved. If many of the gloomier economists are right about where things are going, traditions such as the Clark family boiling syrup may come back into fashion, perhaps sooner than we think.