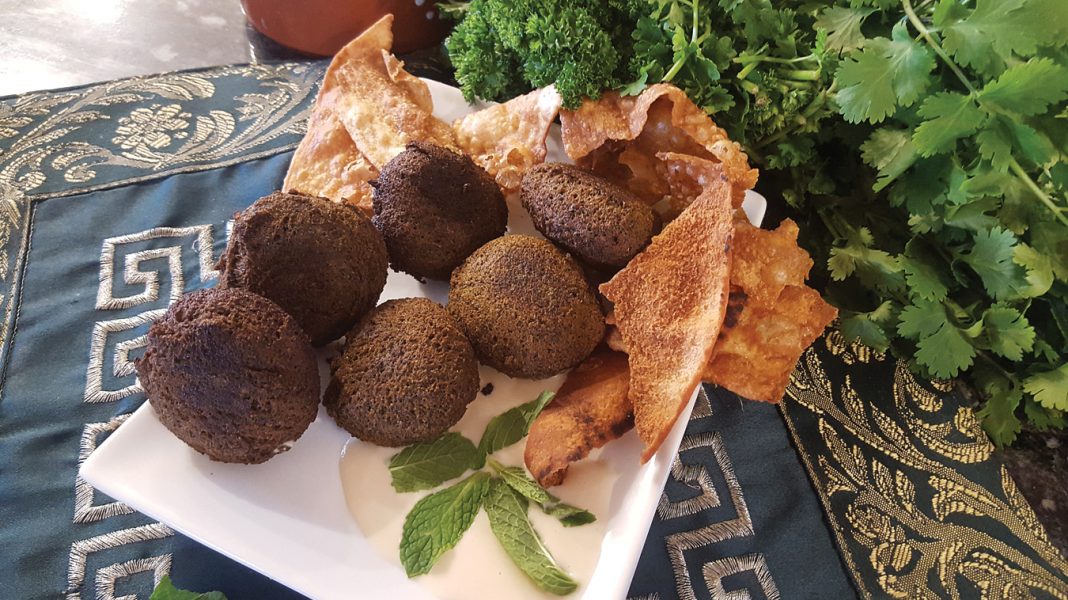 Cilantro (also called fresh coriander, Chinese parsley, Mexican parsley, Spanish parsley, and Thai parsley) is one of the oldest herbal condiments known to humankind. It is thought to be the first herb used by humans in the countries bordering the Mediterranean; a wild species of cilantro from antiquity can still be found today in Egypt and the Sudan.

In ancient China, it was believed that cilantro bestowed immortality on those who used it in their cooking. Coriander seeds have been found in ancient Egyptian tombs, apparently as a food offering for the next world. The Bible (Exodus 16:31) compares the manna that fell from heaven to coriander seed. During the medieval ages, the Arabs used this herb on a massive scale, sometimes including “coriander water” in their recipes. In the well-known Arabian classic, A Thousand and One Nights, coriander is mentioned as an aphrodisiac and part of the potion that helped cure a childless merchant. After the discovery of the New World, the Conquistadors introduced the coriander plant to the Americas in the 16th century. 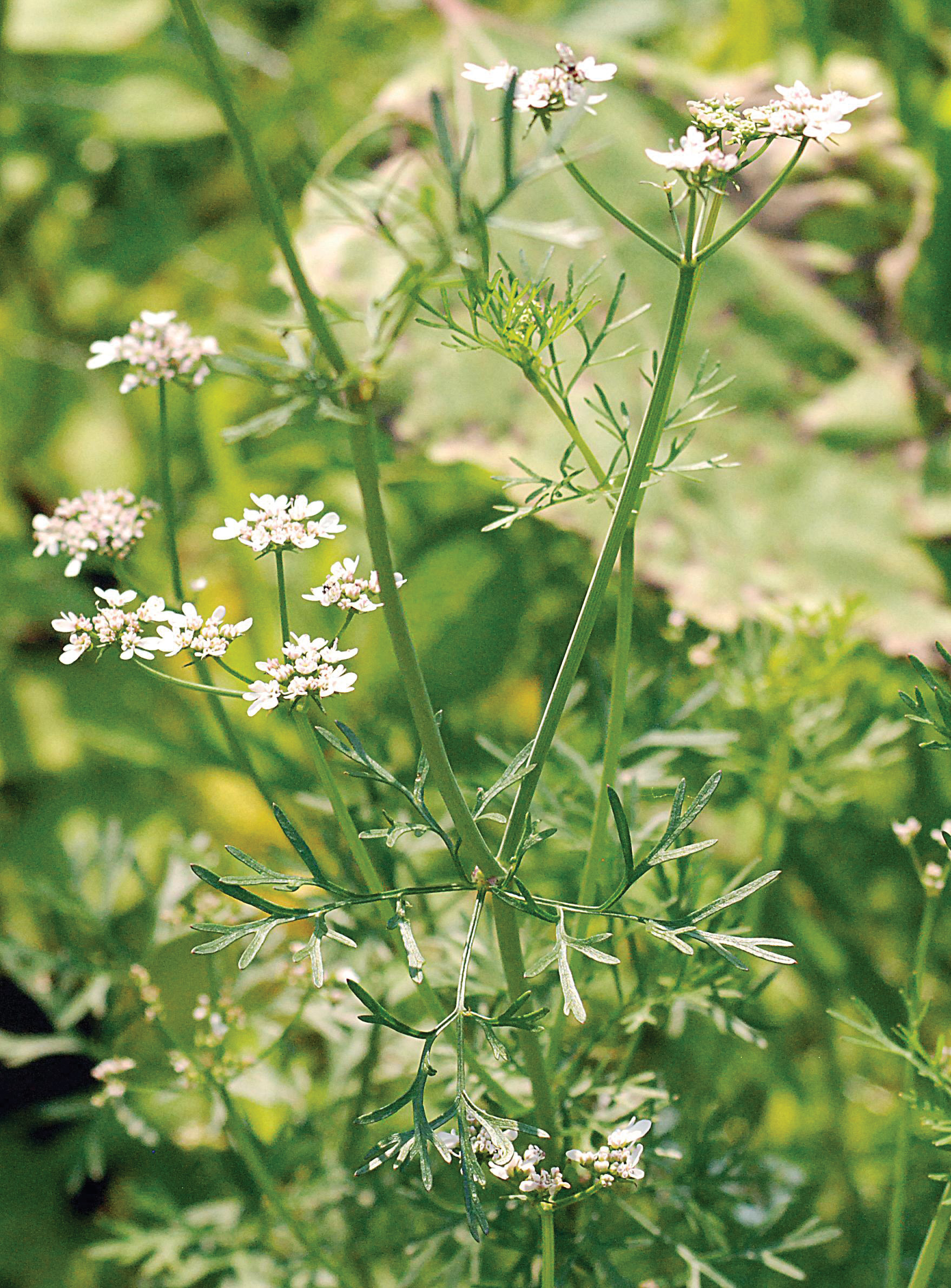 The attractive coriander plant, which can be grown from seeds, is an annual of the parsley family. It grows from one to two feet high and has slender hollow stems, Italian parsley-like leaves, and tiny pinkish-white flowers. The plant can be easily grown in all types of gardens, but to thrive it needs a dry sunny climate and well-drained light soil.

When mature, it produces a very small oval fruit containing pungent oil. The smell of this oil repels insects from both the plant and nearby growth. When dried, the fruit gives out a pleasant aromatic odor and makes a very tasty spice, combining the flavor of lemon and sage.

Cilantro leaves are harvested when the plant is about six inches high. The leaves’ flavor differs from that of the seed, and their pronounced pungency always adds an exotic touch to the taste of food.

During the summer months, when cilantro is plentiful, the fresh leaves, along with their stems, can be washed, then frozen in plastic bags to be used in soups and stews. They will keep for a long period of time. When ready to use, as much as is needed should be chopped, then the remainder returned to the freezer. The taste will only vary slightly from the leaves that are fresh.

Place artichokes in a serving bowl and set aside. 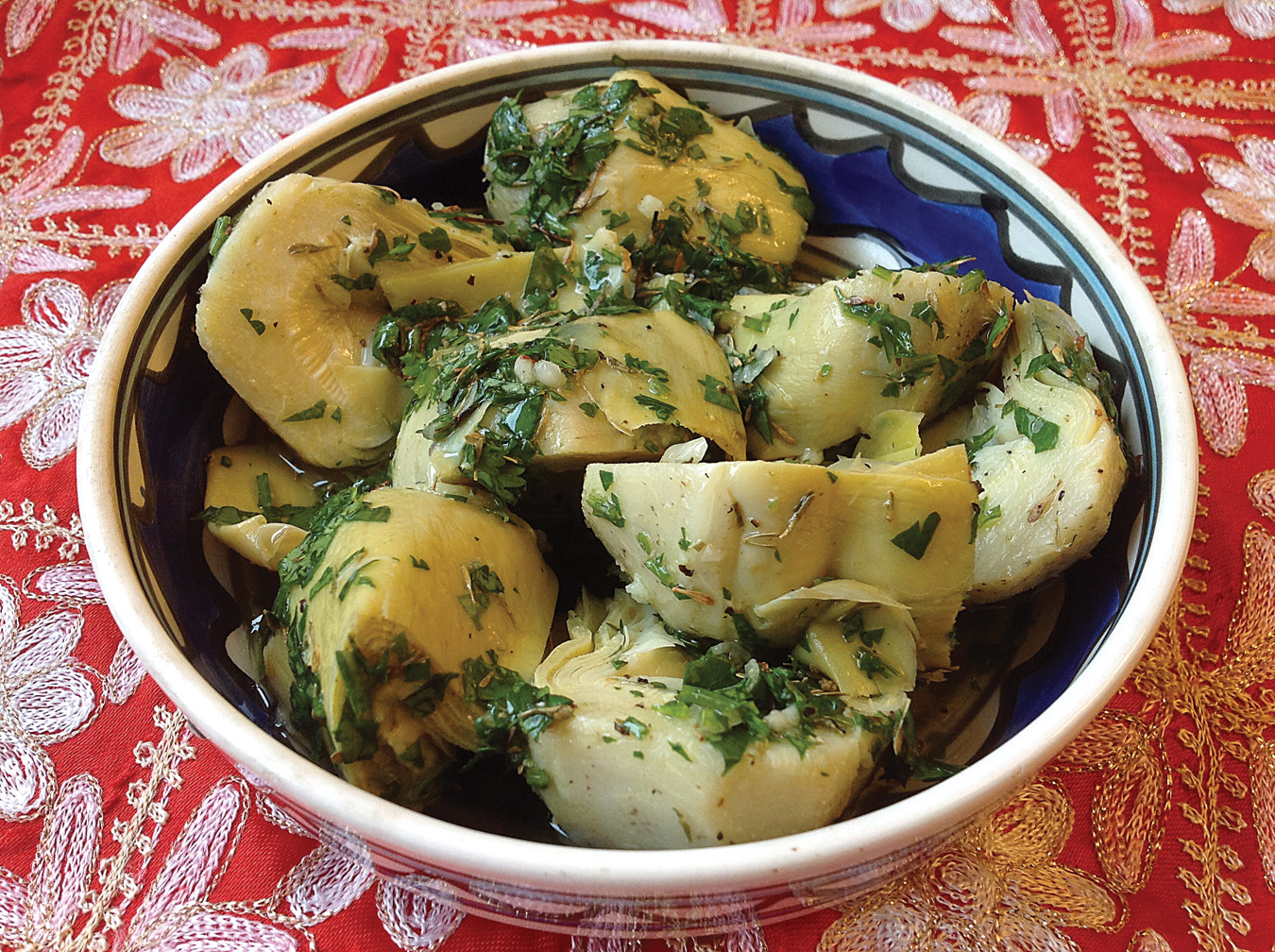 Place lentils and water in a pot, then bring to a boil. Cover and cook over medium heat for 15 minutes. 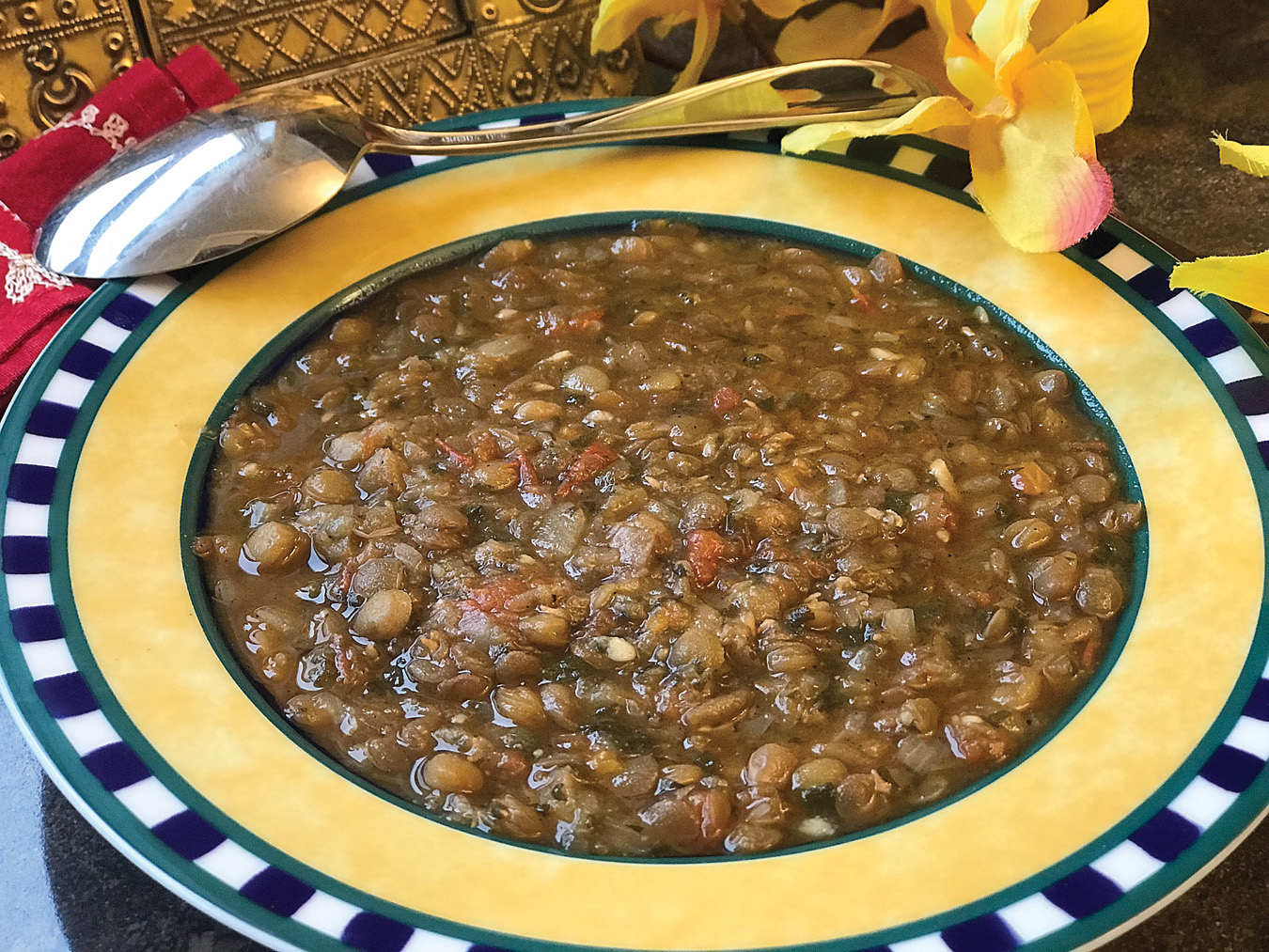 Preheat oven to 325° F. Spread bread on a baking tray and bake for 10 minutes or until golden. Remove from oven and allow to cool. Place cooled bread in a serving bowl and set aside.

Cover with one inch water, increase heat, and bring to a boil. Reduce heat to medium, cover, and cook until meat is tender, about one hour, stirring occasionally.

Add spinach and slowly stir until wilted. Cover and simmer for five minutes. Add lemon juice and simmer for two minutes. Remove from heat and pour stew into a serving bowl.

To serve: On each plate, place a portion of rice, then spoon over a generous amount of stew. Sprinkle pieces of toasted Arab bread over the stew, then spoon about 1 Tbsp. of onion-vinegar mixture over the bread. 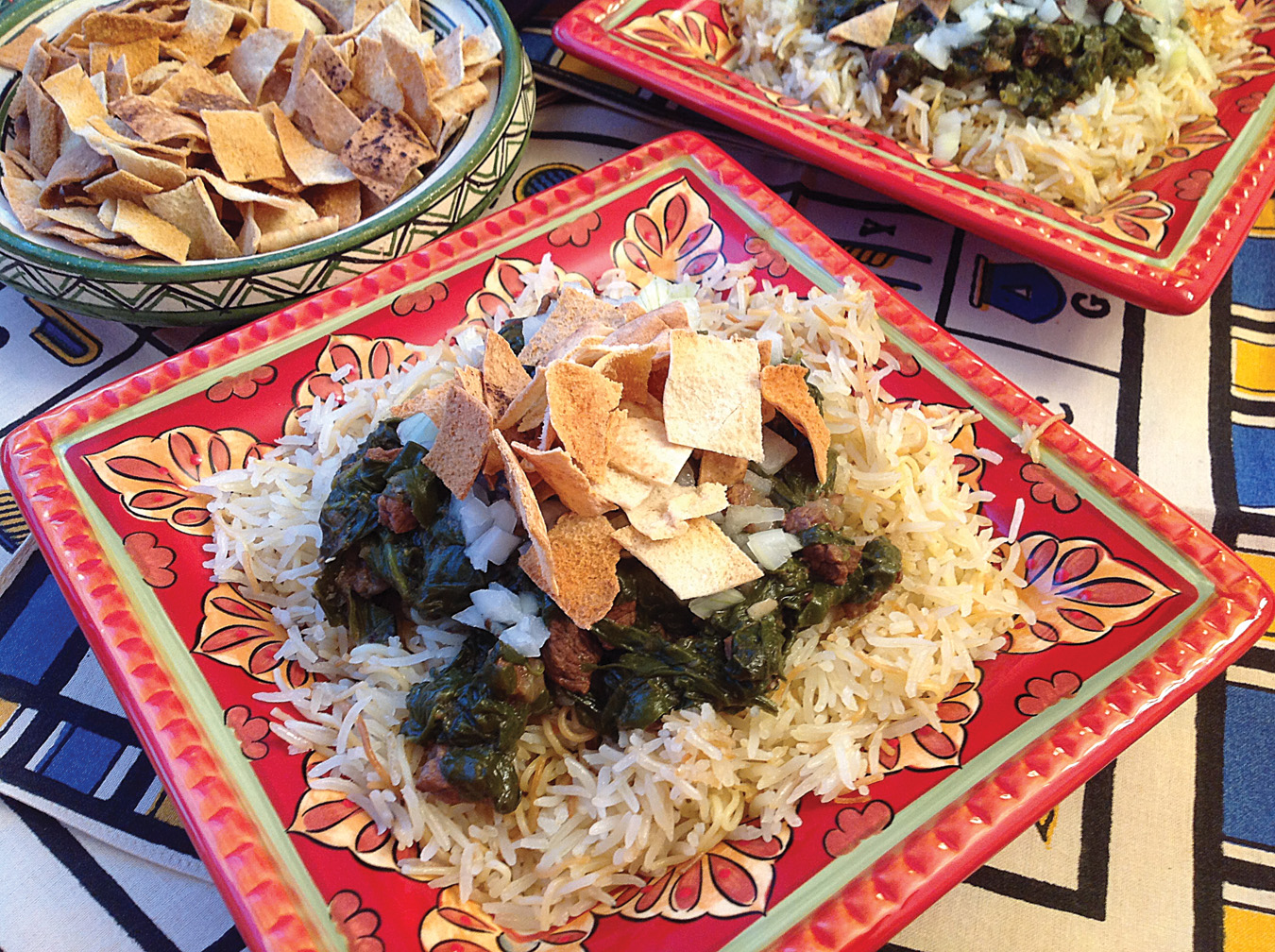 In a saucepan, cover lamb and bay leaves with two inches of water. Bring to a boil, skimming to remove froth. Reduce heat to medium, cover, and cook for 1½ hours or until meat can be easily pulled off the bone. Remove shanks and set aside. Discard bay leaves, but reserve broth.

While the shanks are cooking, deep-fry okra whole in oil for five minutes or until they begin to brown, then drain on paper towel. 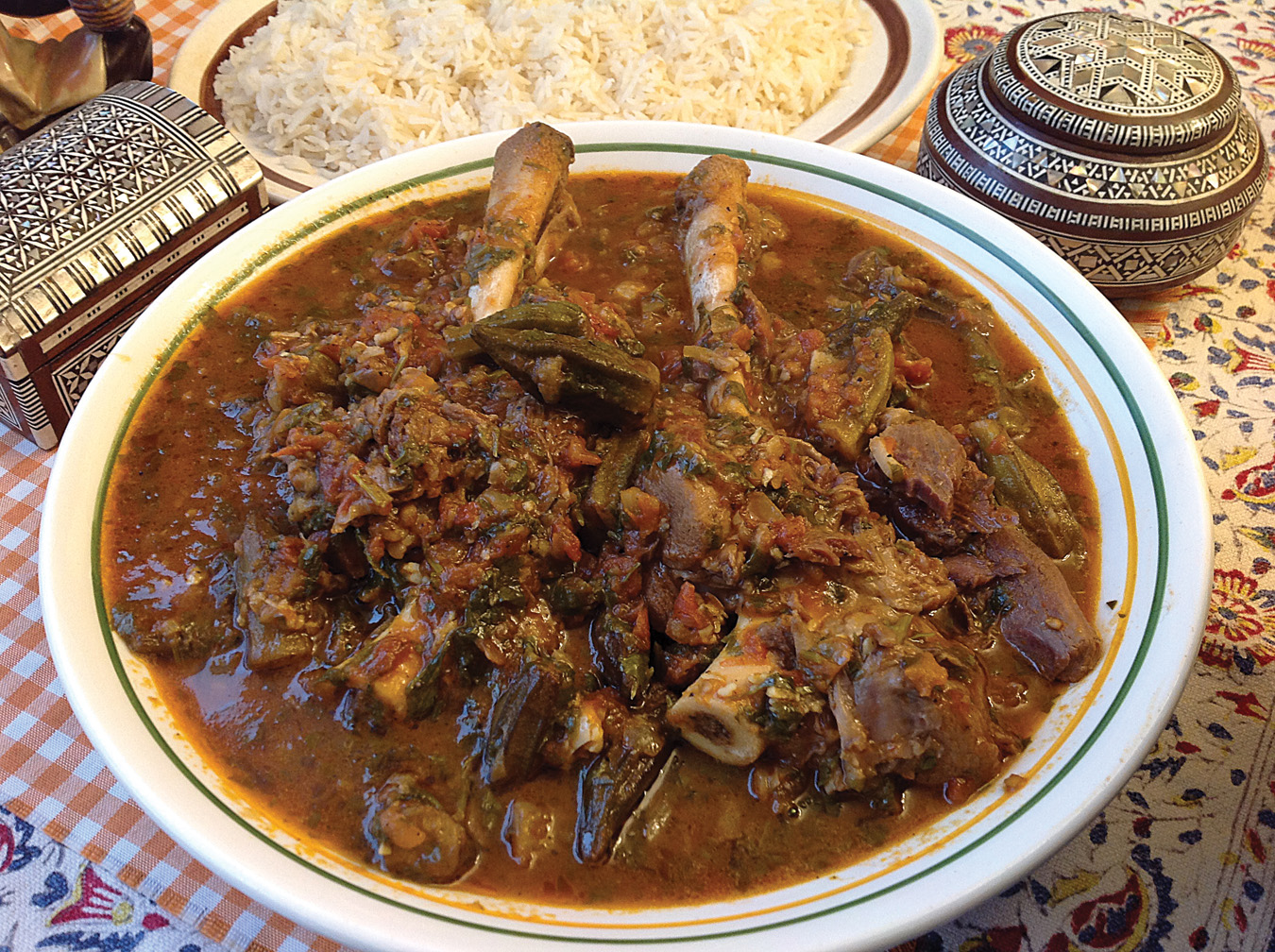 In Egypt, falafel is known as ta’meeya while all other parts of the eastern Arab world call it falafal.

In a bowl, mix the fava beans, onions, garlic, parsley, cilantro, and hot pepper; then put in a food processor and process until the beans are finely ground to a thick paste consistency. Add the cumin, salt, pepper, baking soda, and baking powder and process for a further minute; then remove from the processor and form into patties or balls. If mixture is too soft, add a little flour; if it falls apart, sprinkle with a little water. Cover with plastic wrap and refrigerate for 15 minutes.

In a deep fryer or saucepan, heat the oil over medium-high; then fry the patties, turning them over once or twice, until they are golden and crisp on the outside. Serve the patties warm in a bed of tossed salad inside a pocket of Arab bread, or as an entrée with a tossed salad. 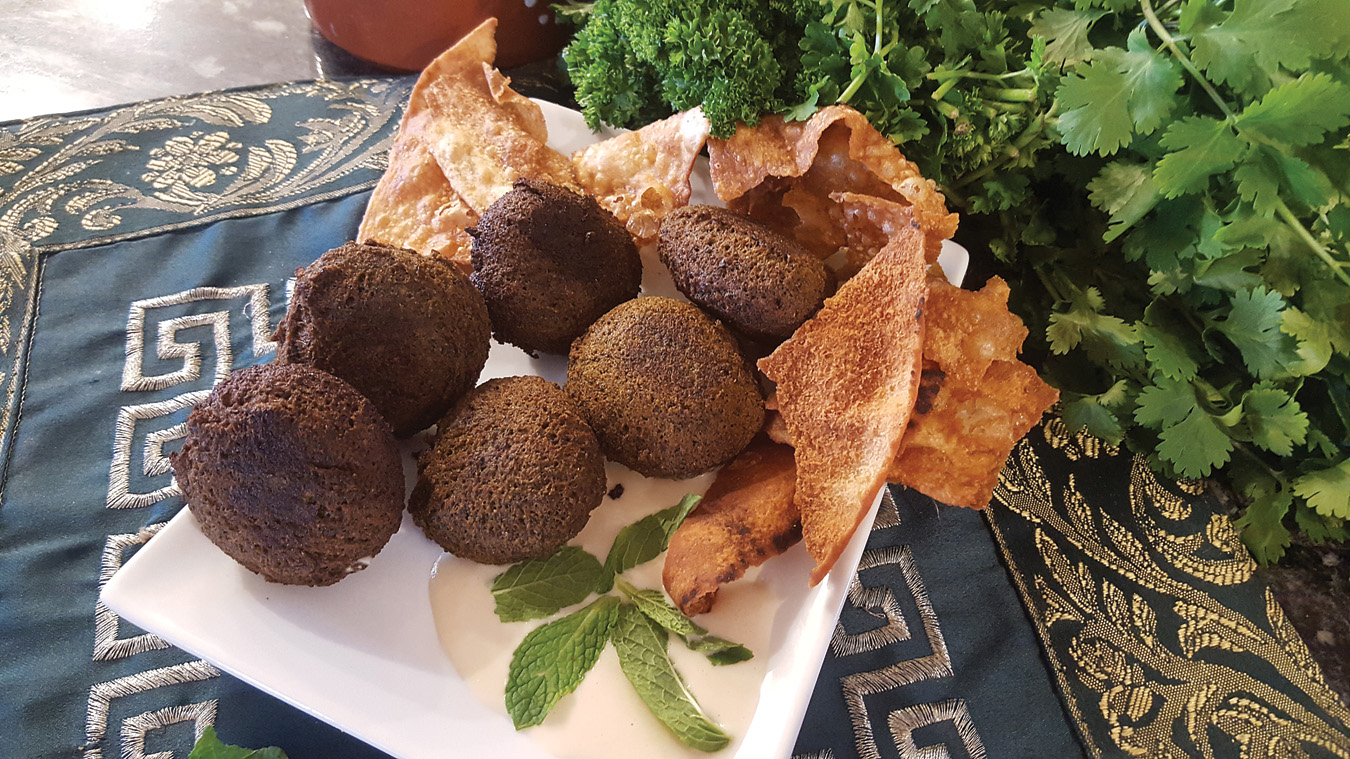 Place tomato slices in a casserole.

Combine remaining ingredients then spread evenly over tomatoes. Cover, then bake in a 350° F preheated oven for 20 minutes. Serve hot from casserole. 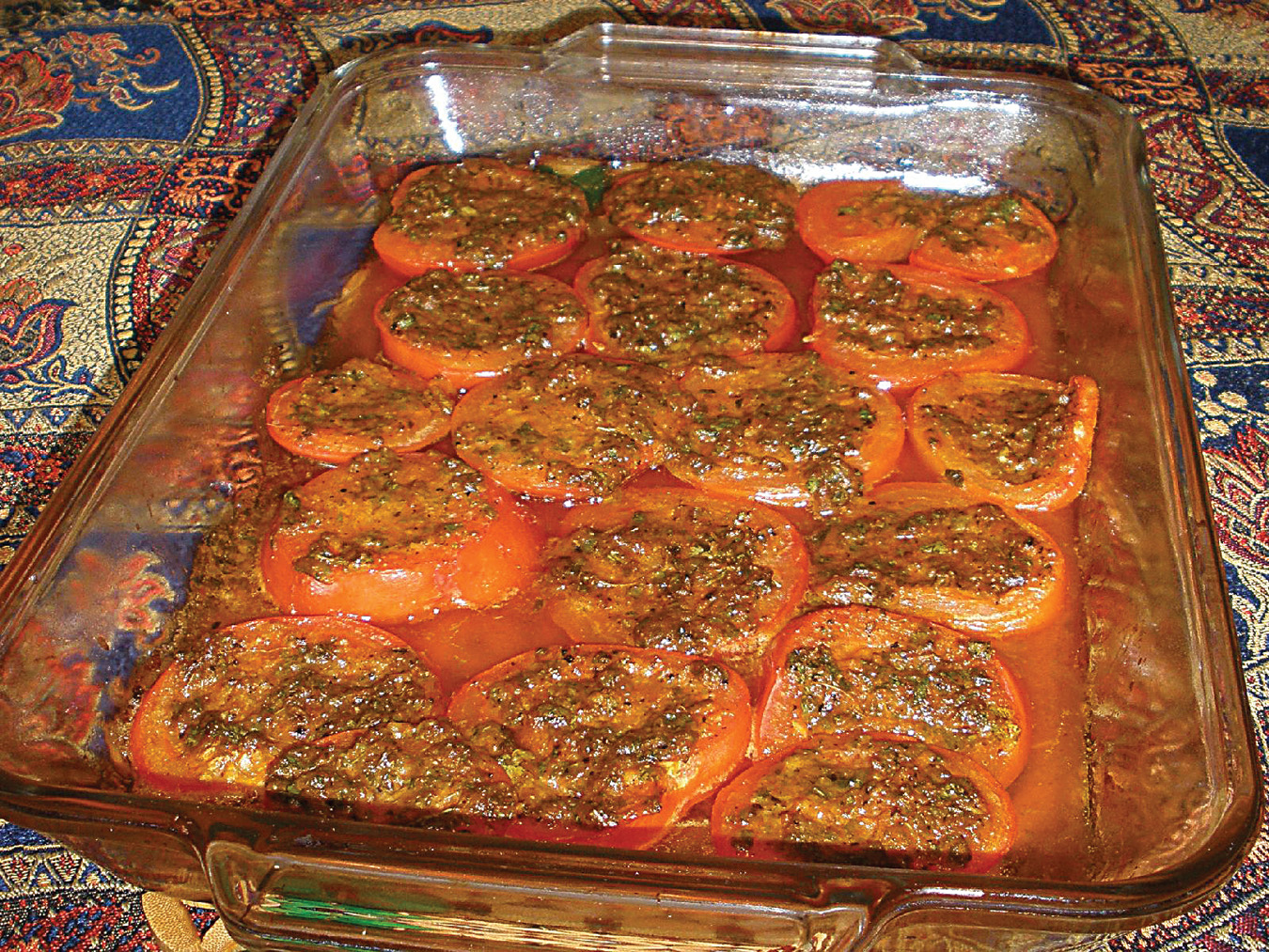