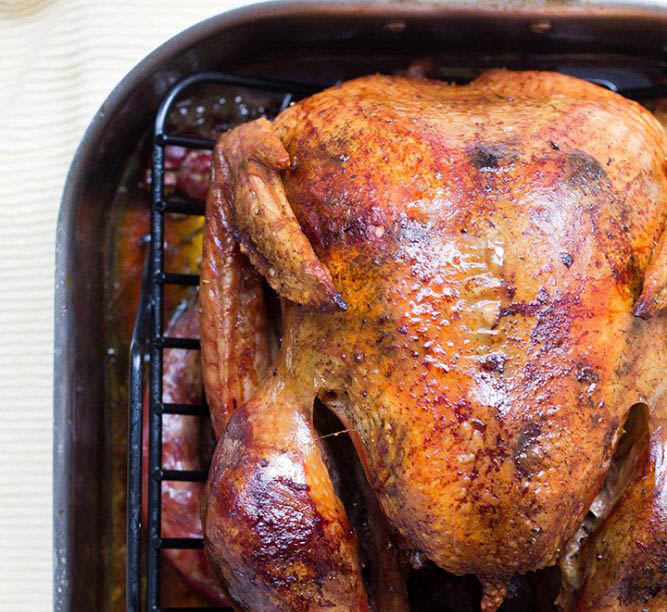 When I was a kid, mom did all her cooking on a McClary wood stove that sat in the corner of her big country kitchen. The stove, fondly known as Old Clary, was used for both cooking and heating the house when the weather turned nippy. Today Old Clary graces my kitchen and I still light her up for special occasions, like roasting the Christmas turkey.

Mom was a great cook but if there was one thing she excelled at, I’d have to say it was turkey. Her fabulous birds were the highlight of holiday seasons. Over the years, I’ve indulged in turkey cooked in almost every imaginable fashion from New Orleans Deep Fried to a strange creation called Turducken but there’s not too many birds that can stand up to mom’s old recipe.

Whether you roast your bird in a wood stove oven like my mom and some of us old timers still do, or use a conventional oven, the secret is not so much in the stove as it is in the cottage-style dressing. The bird draws incredible flavor and aroma from the old fashioned mixture of potatoes, onions and savory spices. It’s also this special dressing that keeps the bird moist and juicy.

Wash a fresh or thoroughly thawed bird inside and out and pat dry with paper towels. Stuff the neck cavity with prepared cottage-style dressing (recipe follows) and fold the skin under and tuck it in to hold the stuffing in place. Pack the stuffing into the body cavity and truss or use a square of buttered tin foil to hold stuffing in place. Leftover stuffing can be packed into a greased loaf pan and put into oven an hour before turkey is done. This stuffing can be mixed with that from the bird before serving.

Rub butter over the breasts, legs, and wings. Sprinkle with salt and pepper. Line a roasting pan with heavy foil and grease with butter. Place the bird breast-side up in the pan. Insert a meat thermometer in one of the thighs. Drape loosely with foil, leaving a bit of vent on each side for steam to escape. Put the turkey in the oven and roast it according to timetable for the size of the bird.

Baste turkey occasionally with pan drippings while roasting. This is an important step that produces a moist, golden bird. During the last half hour, remove the tin foil from top of the pan and let the turkey brown, basting often for a golden brown and crispy effect.

While the turkey is roasting and youngsters are playing with their gifts, gather all the old Santa’s around the crackling stove to warm up with a mug of mulled wine. Or if you’re cooking on a conventional oven, round them up to the kitchen table where they can savor the aromas while waiting for the big feast.

Test for doneness: Your meat thermometer should read 185° F. Pinch thick part of drumstick. It should feel soft and move easily at the joint when twisted.

I’ve heard mention that potato-based dressings such as this one are deeply-rooted in cuisine of eastern North America. However, my mother claims her recipe was handed down from her grandmother who said it originated in England. Regardless from whence it came, it’s a mouthwatering stuffing that fills the house with a wonderful fragrance of Christmas and helps render a bird that is fragrant, moist, and delicious.

This is also a stuffing that can easily be varied to suit tastes. If you prefer a moister stuffing, reduce the bread. For drier stuffing, add more bread. Pureed chestnuts, chopped prunes, or diced apple can be added for unique flavors. My grandma put a few handfuls of golden raisins in her version giving her dressing a delightful, chewy texture.

This recipe makes enough dressing to stuff about a 6 to 8 pound bird. Increase or decrease as needed.

Mix all the ingredients together in big bowl. Mix thoroughly with your hands. Taste and adjust the seasoning.

You can’t have turkey without cranberry sauce and here’s one that pays highest compliment to that special bird. Tart wild cranberries grow abundantly throughout North America and on most seasons, a few stubborn berries can still be found clinging to bare branches long into winter.

Nothing is more fun or rewarding than rounding up the family and going on a cranberry hunt along a peaceful winter trail in search of tangy wild cranberries for the Christmas feast. All it takes is a handful or two of these little gems to turn homemade cranberry sauce into something totally wild and tantalizing. If you can’t find any berries, don’t fret for you can use bottled cranberry juice in place of the wild berries and chalk up the walk in the wilderness to a great seasonal memory.

Boil store-bought whole cranberries, dried cranberries, sugar, and water together until whole cranberries burst. Add the wild cranberry juice and cloves. Taste and adjust sweetness, if needed. Put back on heat and blend in corn starch mixture and cook, while stirring, until thick and clear. Makes about three cups of sauce but the recipe can be doubled, if needed. (If the sauce is not thick enough to suit your taste, use more corn starch/water mixture to thicken more). This sauce can be made in advance and saved up to two weeks in the fridge.

Here’s a mulled wine that’s perfect for perking up all the Santa’s at your Christmas gathering. It’s named after my great Aunt Hazel, who according to family legend, got the recipe directly from the North Pole…

Mix everything, except the cinnamon sticks, into a saucepan. Heat, stirring occasionally, until the mixture is about to break into a boil. Remove from the heat. Cover and let settle for a few minutes. Strain into mugs and serve with cinnamon stir sticks. This recipe can be doubled or tripled, as needed.