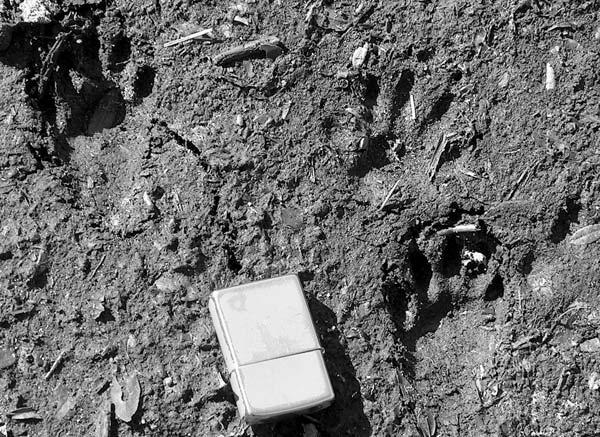 Something prowling around the cabin awoke you in the predawn hours this morning. It knocked down your wood pile and your bird feeder, and kept you awake until the first graying of dawn, when it finally stopped making noise. In the morning, there were unusual marks in the soil, and a few odd scratch marks, but can you determine whether the marauder was a bear or a raccoon?

The original forensic science, tracking is the process of collecting and cataloging identifiable facts from marks made by an animal’s passing, then assembling them into an image of what happened there, even how long ago it occurred. As a pastime in itself, tracking wildlife rivals hunting, I think, and it’s a fine excuse to do some pre-hunt scouting of a place you’ll hunt for whitetails in autumn.

Reading paw and hoof impressions is the most basic tracking skill, and a trail of prints can yield considerable information about the animal that made them. Unique shapes, lengths, and widths of tracks indicate an animal’s species, age, and size. Stride lengththe distance one foot travels forward in a single stepprovides a good measure of shoulder height, and, to a less accurate degree, gender, because mammal females tend to be notably smaller at adulthood than males. A print’s depth in surfaces of varying hardness can yield a good assessment of weight.

Gender cannot be determined from tracks alone. Female mammals tend to be about 15% smaller than males, but a few females in every species grow exceptionally large. Following a set of tracks for a short distance is likely to reveal behaviors that identify an animal’s genderi.e., buck scrapes and rubs, cocked-leg coyote urinations, and territorial predator scats left with purpose at trail intersections.

Tracks made by front and hind feet are usually easy to differentiate, because forefeet are noticeably larger (about 20%) in most species, and particularly those designed to run fast. Reasons for this phenomenon include a barrel-chested physique that permits lungs to expand to great volume, but makes its owner front heavy. Forefeet, which hit ground first in a running gait, require a larger surface area for traction, for shock absorption, and to increase weight distribution (flotation) on snow and other soft surfaces.

Four-legged animals walk primarily on the outer edges of their soles. This maximizes the distance between contact points (straddle), providing a wider stance that optimizes stability on uneven terrain, and increases running maneuverability, like broadening the wheelbase on a racing car. The result is a configuration in which the innermost toe or hoof is smaller and prints less deeply than the largest outermost toe; only humans carry their big toes to the inside.

Track types are separated into “digitigrade” (animals that habitually carry their body weight forward, onto the toes) and “plantigrade” (animals that walk flat-footed). Being literally on their toes all of the time, digitigrade walkers, like the wolf, cougar, and all deer, can spring instantly into flight or pursuit, and are built to run fast over rugged terrain. Slower running plantigrade animals, like bears, raccoons, skunks, and porcupines, are generally omnivorous, shuffling throughout their waking hours in search of food, protected by natural defenses that cause most predators to pass them by.

At a casual walk, the hind foot of most animals prints on top of the front track. This is a learned walking behavior generic among animals inhabiting uneven terrain. The ability to see where the forefoot is placed to avoid stepping into holes or tripping, but being unable to see the hind feet, makes most species learn to habitually place hind feet into the same location.

At an easy trot, both hind feet and one forefoot tend to print together in a roughly triangular shape, with the remaining forefoot printing separately ahead of them. Having three feet hit the ground almost simultaneously provides the stability of a tripod, while the remaining forefoot acts as a pivot when those three are brought forward. The forefoot that prints alone is the strongest, and indicates which side is dominantlike left- and right-handed people.

At a hard run, most animals adopt a “rocking horse” track pattern in which forefeet are planted together and far forward to act as a pivot when the rear feet are raised off the ground and brought forward to land on either side and ahead of the foreprints. When the widely-stanced hind feet make contact, the animal lunges forward, forefeet together and stretched ahead to catch it after a leap that may exceed four times its body length.

Deer, cows, and pigs are “ungulates,” with cloven hooves that can be splayed to provide a braking action when descending slippery hillsides. Horses alone possess a single hoof that’s better suited to travel on open plains. Members of the squirrel family, from red squirrels to woodchucks, are marked by four toes on the forefeet, five toes on the hind, all sharply clawed. Lagomorphs (rabbits and hares) have four toes on all paws. All weasels, from otters to ermine, have five clawed toes on all four feet.

With so many identifying characteristics to remember, an illustrated tracking guide is an integral part of a track hunter’s field kit and home reference library. Good take-along references include A Field Guide to Animal Tracks, by the late Olas J. Murie, who established the first database of wildlife tracks in North America. Renowned tracker Richard P. Smith has written numerous field guides, and I like to believe that my own titles are pretty good, too.

You’ll also need a few inexpensive measuring tools. Most fundamental is a six-inch, clearly photographable ruler to measure track dimensions, although any number of objects have been placed next to a track or scat for size reference later. Next is a carpenter’s tape measure, ten feet long or more and with locking blade, for recording stride lengths and leaping distances. An inexpensive digital camera (under $100), is a convenient means of electronically scrapbooking your more interesting discoveries.

For trips afield, include all of the above with a notebook and pencil in a zipper-lock freezer bag. The easiest means of carrying these items, along with water bottle, granola bars, and other necessities is in a comfortable daypack (about $30). You’ll really appreciate the daypack if tracking gets into your blood and you advance into casting tracks from plaster.

Like almost any pastime in today’s highly specialized world, tracking wildlife can become a lifelong commitment that eventually encompasses a study of animal behavior and physiology, taxonomy, and other natural sciences. But it can also be a fun, inexpensive pastime for amateur naturalists who just want to know more about the wildlife that shares their neighborhoods each night.

Len McDougall is the author of The Encyclopedia of Tracks & Scats, The Log Cabin: An Adventure in Self Reliance, Individualism, and Cabin Building, The Field & Stream Wilderness Survival Handbook, The Complete Tracker, Practical Outdoor Projects, Practical Outdoor Survival, The Snowshoe Handbook, The Outdoors Almanac, and Made for the Outdoors. He is also a Wilderness Guide/Survival Instructor for Timberwolf Wilderness Adventures, Paradise, Michigan.