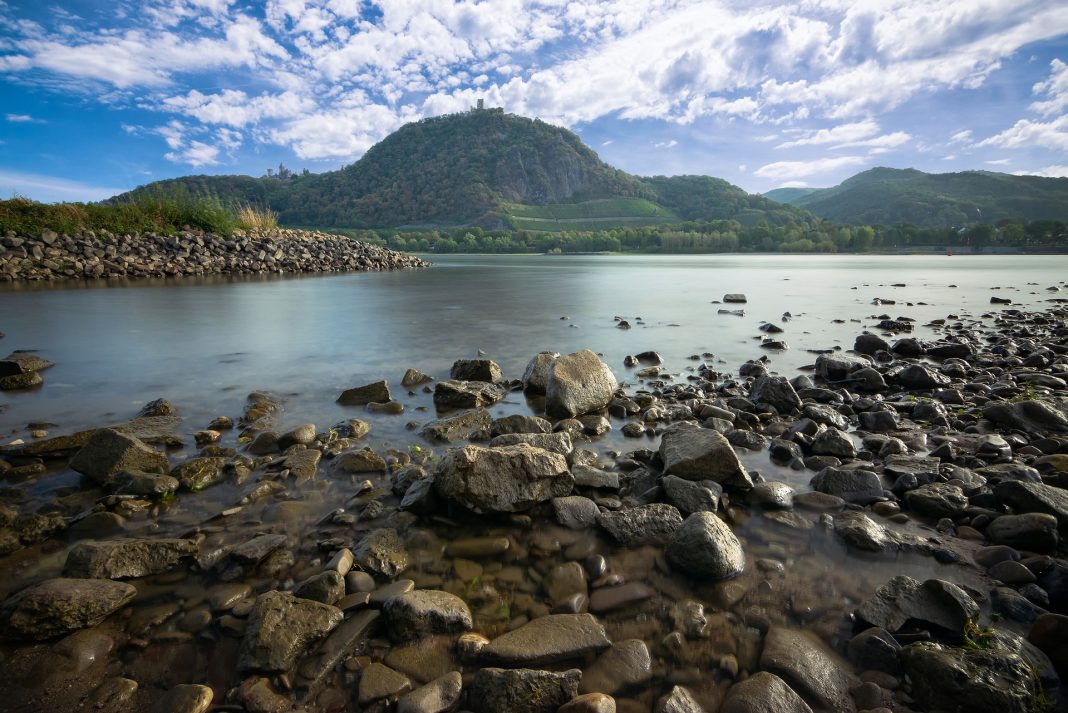 I had always wanted a river rock shower. Who knows why? We all have our idiosyncrasies. Maybe because it just sounded like a beautiful idea. Maybe because it conjured up images of two lovers washing each other’s hair to Rossini’s “Barber of Seville,” surrounded by walls of a thousand stones, and the shampoo sitting on its own little rock ledge. But whatever the reason, I knew I was a hopeless romantic and would still want one, even when I got to the age where I should be wearing a helmet in the shower.

I finally got my chance to go for it while finishing up the rebuilding of my log house after the first one burned in 1995. It would have been much easier and cheaper to use tile, but I knew that if I built what I really wanted, I’d cry only once. So, I started in, not quite knowing where to begin.

Over the years I had collected a pile of small, smooth, flat river rocks, but cumulatively they were extremely heavy. Since this shower was in the loft bathroom, and even though the floor was supported by 4″ x 10″ beams, I’d have to consider weight.

I had heard of cultured stone (pumice and portland cement) cast from molds made from river rocks, but only half the weight. I looked in the yellow pages and found the local distributor for “Cultured Stone” products. They showed me samples and I was delighted to see that each stone looked exactly like a real river rock, but was flat on one side for ease in installation. They also gave me a leaflet of how-to instructions, but warned me that they had no data on showers so their 30-year warranty would not apply. I didn’t care; I’d take the chance. Their stonework holds up outside in the rain. What’s the diff?

I had already built the shower walls out of 3/4″ plywood attached to 2″ x 4″ studs (around a 3′ x 5′ shower pan) so I measured the square footage and ordered 9 boxes of their smallest stones called “skimmers.” Each one was about the size of my clenched fist. Each box, called a “handipak,” equaled 8 square feet and weighed about 90 lbs. The total cost was $600.

Following the instructions, I installed a vapor barrier over the plywood. I chose roofer’s “Stormshield”tarpaper with a sticky backingbut regular tarpaper or 6-mil plastic sheeting can be used instead.

Then I covered the plywood with cement board (“Wonderboard”) and caulked the seams and screws, then fastened sheets of metal lath (2.5 lb. galvanized diamond mesh) to the cement board with small washers and screws. The mesh creates a textured surface to grab the mortar.

I was advised by the Cultured Stone tech line to apply a scratch coat of mortar 1/2″-3/4″ thick on all three walls of the shower first, texture it with a 1/4″ notched trowel, and let it cure for at least 48 hours before laying up any river rocks. Using that method, I could take my time installing a few rows of rocks whenever I felt like it by mixing up a small batch of mortar each session to butter the rocks and press them against the scratch coat.

I bought six 94-lb. bags of their recommended Type S mortar and mixed up ½ bag at a time to the consistency of peanut butter, dyed it a terra cotta color with iron oxide powder, and troweled it on with a tremendous expenditure of energy, but no real skill. A lot of it fell off and made a huge mess that included permanently staining my shoes to look like “feet of clay.” Because cement starts to harden within one hour, there was no time to lollygag. I quickly developed my own technique for forcing it into the metal mesh. Using rubber gloves of course, I scooped up balls of mortar and threw them as hard as I could at the mesh”splat, splat, splat.” After splatting on a row or two, I troweled it nice and smooth to about 5/8″ thick, then “raked” it horizontally with the notched end of the trowel. Thank goodness no one saw me in action, but the end result was great.

Every night for a month, I worked a couple of hours on the shower. It became a late night ritual to mix up my bucket of mud and lay up a few rows of stones while listening to FOX news and the possible whereabouts of Osama bin Laden.

The first 2-½ feet of the stone wall, starting from the bottom, requires squatting on one’s haunches, and the last 2-½ feet requires perching on a step stool. There’s only about 2-½ feet of comfort zone in the whole process. I felt like a strange bird in a grotto with red droppings all around. Setting 1000 rocks used up 5 more 94-lb. bags of mortar and 25 lbs. of iron oxide powder.

Before I ever began the actual stonework part of the project, I had laid out all the river rocks in a mock shower frame on the floor. I thought it would be a good idea to choose and arrange the rocks in each row in advance and then transfer them to the shower. As it turned out, that time-consuming step was not necessary. One can do just as well picking rocks out of the box as one goes, measuring each row laid out on the floor to make sure it corresponds to the wall measurement before cementing the rocks in.

It’s aesthetically pleasing to alternate the big and small, fat and skinny, and flat and bulbous stones throughout the entire structure, to achieve a balanced look.

Because my log house is dominated by warm earthy colors (even my carpet is a deep red-orange), I did not want anything gray. Not only did I dye the mortar, but I painted the rocks with colors I mixed from acrylic craft paint. Since I wanted a natural look, and not the bright jelly-bean look, I toned all the colors with lots of white. That created a more realistic dusty look to the rocks. When they were all painted to my satisfaction, I sealed the walls (rocks and mortar) with a multi-purpose water-based sealer for concrete, tile, and masonry. The brand I chose only came in medium gloss (I wanted flat) so the rocks appear perpetually wet, but it’s a nice look after all.