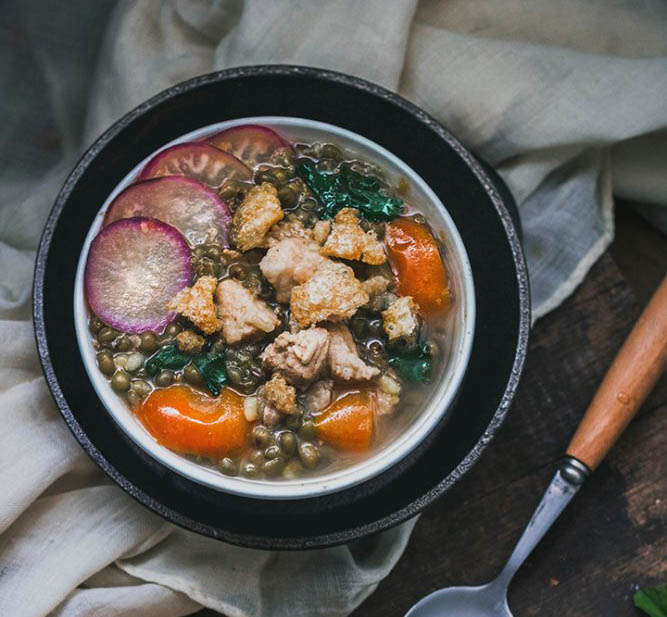 When I was a girl growing up in the backwoods, one of my favorite times of the year was autumn when grandpa would butcher a pig to put up for winter. Regardless of the sadness I felt as the time drew near for our specially chosen oinker to meet his impending waterloo, I still looked forward to the season with much mouth-watering anticipation.

On pig butchering day, grandpa would rise long before daybreak and by the time grandmother and I had the morning fire lit and a kettle of dandelion coffee perking, the most unpleasant part of the job would be over. The plump porker that I had spent the summer fattening up for the larder with armloads of pig-weed and buckets of swill had, almost magically, turned into two sides of pork ready to be made into all kinds of good eats to enjoy over the long winter months ahead.

After blessings were given, grandpa, grandmother, and I would set about putting up the pig, which meant a long day’s work making good use out of every part of the animal, from the snout to the hoofs. As much as I liked pickled pigs feet, salted belly, headcheese, smoked hooks, and bacon, my favorite treat was, and still is, the cracklings, or as we called themcracklin’s!

Cracklin’s are crispy, tasty tidbits of pork that are left over from the lard-making process. Since my grandparents were very self sufficientputting up most of their own provisionshomemade lard was an important staple for our household as grandma never had options of cooking with expensive store-bought butter or fancy vegetable oils. Even if she had, I’m sure she would still have preferred homemade lard above all else.

To this day I, too, prefer to use homemade lard for all of my frying and baking needs. Even though I don’t raise a pig every year in the old manner like my grandparents did, keeping with tradition I still indulge in the age-old craft of making lard and, in turn, ending up with a delightful mess of cracklin’s to boot.

Making lard is a fun activity that can be enjoyed in all seasons since most butcher shops these days have a ready supply of pork fat that is inexpensive and can be purchased not only in fall, but throughout the entire year! Because I like cracklin’s so much, I often make a batch of lard even when my supply isn’t running low in order to render the special treat. When I have a craving for cracklin’s and my lard pot isn’t yet empty, I melt down a kettle of fresh lard and treat the birds to my old batch. Making suet for the birds is a delightful way to put excess or old lard to good use.

Even though animal fats havein the past number of yearsgained a bad reputation as being cholesterol-makers, I believe that when eaten in moderation by healthy folks, with active lifestyles, it can still be enjoyed just as it was by our ancestors. My grandparents both lived long into their nineties with no fear what-so-ever of pork fat being bad for their health!

All of grandmother’s recipes for biscuits, pies, fried fish, and birds called for the use of lard and I can vouch for the fact that her pastries were light and flaky and her grouse as finger lickin’ as any chicken. And grandpa and grandmothereven in old agewere a fast-footed pair hard to keep up with.

Since cracklin’s are a by-product of lard, in order to end up with a special treat of these munchies, you’ll have to first make a batch of creamy smooth, fragrant lard. To do this, go to your butchershop and ask for a couple slabs of pork fat or you can contact a local pig farmer to see if they have any available fat fresh off the farm. My supplier sells pork fat in rolls of about 3 to 5 pounds. One of these rolls will melt down into about one or two quarts of lard. From this, you will get an ample plateful of cracklin’s.

There are different kinds of pork fat and the very best for pastry lard is said to be that which comes from the layer next to the bacon strips, known as leaf fat. Usually leaf fat is harder to obtain so if you’re not picky, like me, you’ll be happy with shoulder, loin, or back fat which, in my opinion, are all great for lard. The caul (stomach) and ruffle (from around the intestines) fats can be used for lard too, but they will produce a slightly stronger flavor and darker grease more suitable for frying than for baking. However, if cracklin’s are your number one concern, then go with whatever you can get. The grease from all these fats is equally delicious and, as far as I’m concerned, work well in all recipes.

When you purchase fresh pork fat, you can ask for skinless slabs or that which still has on the rind. Personally, I like pieces that come with the rind on as this makes the best cracklin’s for eating out of handones with lots of crunch. Rindless fat produces a softer, puffier cracklin’s which are excellent when crumbled and added to biscuit dough or sprinkled on cornbread.

Once home from the market, chill the fat until it is firm, as cold fat is much easier to handle. If the fat has been previously frozen, wrap in a tea towel and thaw in refrigerator. When ready to use, pat well with paper towels to remove all traces of moisture.

Using a sharp knife, cut the fat into uniform cubes a bit plumper than the size of playing dice. Put a handful into a large, heavy kettledo not use aluminum or glass, as they might not be able to withstand the extreme heatand melt until the bottom of the pan is well greased. Add the rest of the fat, making sure the kettle is never more than 2/3 full as it could boil over and splatter.

Over medium heat, stir with a long handled wooden spoon until the fat begins to fry down. As the fat melts, the grease level will rise. Be extremely careful when stirring as the hot liquid can cause severe burns if splashed on the skin. Never allow children near the stove when making lard! As the grease fries out of the cubes, the cracklin’s will begin to rise to the top of the kettle. Once they have all turned a golden brown and have surfaced, it is time to remove the kettle from the heat. Again, be sure to handle very carefully.

Using a metal strainer or sieve, strain the grease into another heavy-bottomed kettle, catching the cracklin’s in the sieve. Using a wooden spoon, force the remaining grease out of the cracklin’s by pressing against the sieve. DON’T use plastic strainers, as they will surely melt.

Once strained, spread the cracklin’s on a clean tea towel or several thickness of paper towels to help absorb remaining grease. While hot, season with salt, pepper, and cayenneif you like your snacks with extra kick.

After the lard has cooled down it is ready to be ladled into your lard pot. If you don’t have an earthen lard pot as I do, then a sterile canning jar or a coffee tin makes suitable lard tubs. The lard can be stored in the refrigerator or frozen. My grandmother kept a handy pot of lard at room temperature in the cupboard as we didn’t have a fridge or freezer and it saved very well. Every so often she would send me to the root cellar to get a refill from her big earthen lard crock.

When using the lard for dessert pies or pastries, scoop from the top of the pot as this is the purest. Lard scraped from the bottom of the lard dish will contain traces of cracklin’s. This tasty sediment is great when used as fat for biscuits or savory meat pies. The specks also taste mighty good when spread on top of golden cornbread. My grandparents and I used the “bottoms” of the lard pot as spread for fresh baked bread and topping for baked and mashed potatoes.

Once the cracklin’s have finally stopped cracklingand they really do snap and crackle as their name impliesthe time has come for tasting. Try one. But let me warn youyou can never stop at just one! If you’re like me, you’ll be sneaking and snacking til there’s nothing left but a lick of salt!

Whether you enjoy a couple cracklin’s and a biscuit for lunch or tote a pocket full to munch on as you hike your favorite trail, nothing makes a better bite! Cracklin’s can be made into a delicious trail mix sure to become a family favorite. A snack that’s guaranteed to give you energy to burn…

This is a delicious pocket treat that is not only nutritious, but saves exceptionally well and is quite cheap to make.

2 cups cracklin’s
3 cups raisins
1 cup dried apricots
1 cup sliced dried apple rings
3 cups nuts (peanuts or mixed nuts, whichever you prefer)
1 cup dried cranberries (or a mix of dried berries if you do your own. I dry my own blueberries and add to this mix. If you don’t have home-dried blueberries, then currants work well in their place).

You can add any other dried fruit or vegetable you fancy to the above. Divvy up into little zip lock bags. Store in a cool, dry place.

Mix dry ingredients. Blend in lard. Stir in the buttermilk until dough can be formed into a ball (You may need a little more or less buttermilk than above). Pat on floured board and cut into circles. Place on baking sheet and bake at 400°F until golden brown. For a wonderful lunch, serve these biscuits with a few cracklin’s and a crisp sour pickle.

Mix dry ingredients. Cut in lard. Sprinkle with cold water (using more or less as needed) in order to form a ball. Roll out on floured board and use in your favorite recipes for pie.

When your hankering for cracklin’s lands you with more lard than you need, you can always make a special treat for the birds out of excess or old lard.

Mix above ingredients not bothering to worry about measures. What you want is a combination that you can form into balls or shape into cakes. A neat idea is to take this mixture and, using your hands, press it into pinecones. These hang very nicely from your backyard trees and the birds seem to fancy them.

The best eggs in the world are those that are fried in homemade lard. The only way to prove this is by testing for yourself! Chicken, liver, steak, potatoes, onions … almost any fryable is so much tastier when done in lard. Just try it!