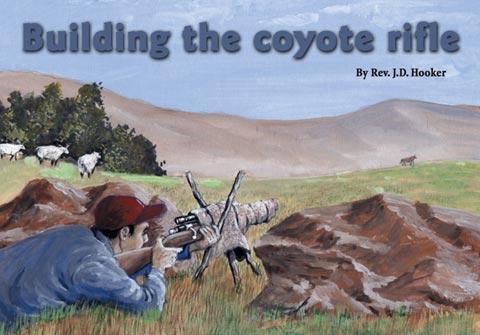 Feral dogs, coyotes, and those odd-looking “coy dogs” like to feed on my neighbors’ livestock on occasion here around Kendallville, Indiana, and for years the neighbors looked to me to either trap or shoot the predators. Not only is our coyote population increasing around here, but it seems that every time there is a dip in the economy people from the towns drop off some of their once-pampered pets.

These domesticated animals don’t stand a chance, of course, first beginning to starve after just a few days, then becoming downright dangerous themselves as they target livestock or young children.

Most folks suffering serious depredations will happily allow me to use traps to take the nuisance animals, but a growing minority seems to hold anti-trapping points of view. Others have tried using steel traps themselves before calling me, but all too often their efforts simply left the predatory scavengers educated to that particular hazard. So more and more I took to just shooting these predators, which typically meant taking them at long-range in the early morning or evening, and often in bad weather.

But I lost the most accurate long distance rifle I’ve ever owned, a Carl Gustaff-made, Swedish Mauser in 6.5×54 mm with a solidly mounted 8×56 scope when our house burned down a few years back. So I needed a new long-range rifle that was suitably accurate. Here is how I got one.

Anyone who knows me at all realizes that our family doesn’t actually have much of a cash income, so no one should be a bit surprised that I looked for nearly a whole year to find myself another really accurate center fire rifle in a price range that I was willing to pay.

While just about any fairly flat shooting cartridge between .222 and .32 is plenty powerful enough for this sort of shooting, most of the rifles I looked seriously at were military surplus bolt action guns for a variety of reasons. All of the various Enfields, Krags, and Mausers are battle-proven tough firearms, well capable of standing up to hard use in any sort of weather. Plus, unless they’ve really been abused or seriously neglected, quite a few of those old war horses are capable of some mighty respectable accuracy as well.

What I finally settled on was a short model 44, Mosin Nagent carbine made by the Soviets in 1946. This same model of rifle was used and preferred by both sides in the Russo-Finnish War, being also later issued to the Russian “stick breaking” lady snipers. During the Second World War, German officers on the eastern front really learned just how devastatingly accurate so many of these brave young Soviet women could be with this rugged and accurate bolt gun.

Though the wooden stock and hand guard looked mighty dinged up and a bit rough on the particular specimen I selected, once all of the Russian version of “cosmoline” was removed from inside of the barrel and the action, the inside of the bore appeared pristine. The trigger pull was acceptable for me, and the headspace was well within tolerance.

Firing from a sandbag rest at 50 yards though, the best groupings I could get from the first batch of surplus ammunition I found ran nearly 2 inches in diameter. That wouldn’t be close to good enough for long range work. So I started trying commercially-produced ammo, and the picture brightened up immensely. I found Sellior & Belliot rounds capable of keeping every shot touching, even when I backed up to 100 yards. Yep, that old Russian war horse would work fine for my purposes.

I didn’t give much attention to the appearance of the rifle’s stock, so all the dents and dings are still there. What I did was obtain and install a “B Square” scope mount, of the type that simply replaces the rifle’s rear sight. That leaves the scope well ahead of the gun’s action, meaning, of course, that not only would the gun’s straight bolt not need to be bent, but also that I could readily use stripper clips for loading the rifle, which I think is a real plus when hunting from concealment and striving to keep motion to a minimum. “B Square,” by the way, makes similar sturdy yet easily installed scope mounts for most military type and many commercial rifles. Also, adding a “NcStar” 4X extended eye relief scope with a battery operated lighted crosshair reticule, helped me see in the poorer lighting conditions of early dawn and late evening when I did most of my serious predator control.

Prior to actually installing this new sighting system, though, I recruited a little help from our 12-year-old daughter, Casandra.

First off I cut notches to hold the rifle steady in the top of an old cardboard box. Then, with the bolt removed and the rifle nestled snugly in the notches, I lined up the gun with a target mounted 50 yards away. Peering very carefully through the bore, I had Casandra draw an X exactly where the center of the bore lined up on the target. After which I got her to make a second X on the same target where the gun’s iron sights aimed. Once I had the scope mounted, all I’d need do would be a bit of “fine tuning” once I’d lined the bore and the crosshairs up with the Xs on the target.

Those “B Square” scope mounts are easy to install after simply using a tiny punch to drift out a single pin in order to remove the rear sight. Tightening up two screws (use “Loctite” on this step) was all that was needed to have the mount solidly in place.

Using a felt-tipped marker to draw a vertical line on the gun’s iron butt plate helped me to ensure that the rifle remained perfectly level as I twisted the scope, just slightly in its mounts, to line the vertical bar of the scope’s crosshair with a 4-foot-long carpenter’s level set out on the firing range, before snugging up the screws in the rings. After which I used 24″x24″ sighting-in targets to sight-in the rifle so that the bullets were striking 3 inches high when shooting at 100 yards. That “old” Russian 7.62×54 R round has practically the same ballistics and trajectory as our much more “modern” .308 cartridge, so sighting in 3 inches high at 100 yards had the bullets striking dead-on at just over 300 yards, and only slightly more than 4 inches low at 450 yards. Figuring that most creatures in the feral dog and coyote size range have a roughly 7-inch diameter “kill zone,” I decided that I actually don’t need to worry so much about range estimation until my intended quarry is further away than 450 yards. While in the normal dawn and dusk shooting I do so much of when after these livestock destroyers, I’d probably be more than just a little bit foolish to attempt a shot at any range further out anyhow.

Over the years I’ve found that more often than not, the best time to try taking any sort of canids that have taken to preying on peoples’ livestock is during pretty inclement weather. Not only do those calf, piglet, poultry, sheep, and goat killers seem to learn mighty quickly that “normal” humans won’t be out looking for them when the weather turns ugly, but they seem to have been born knowing that all of the noise associated with thunder, rain, snow, and wind helps to cover up any small sounds they themselves might make while slipping up on their prey.

So I applied two good coats of Turtle Wax (any other really good automotive type wax should work equally well) to the exterior of the barrel, action, magazine, scope, rings, and mount, as well as to all the surfaces of the stock and hand guard, buffing each coat to a nice sheen. Then I applied a third and final coat, which was simply left to dry, unbuffed, to eliminate the “shine.” Then I reassembled my rifle.

Though the triple coating of auto wax really does a lot to protect the rifle, and even though the final coat of wax hasn’t been polished, once the gun gets wet, light still too easily shines off the wet gun. So, as you can see from the photos, I wrapped the gun, scope and all, with strips of plain burlap, which leaves it appearing just about exactly like a small bent-down bunch of dead weeds. Before adding the burlap wrapping, I removed the rifle’s spike-style bayonet, because I couldn’t see how it might be useful in pursuing the purposes I had in mind for the gun. That also removed a few ounces of weight.

Additionally, before heading out hunting in bad weather, I’ll always use a piece of electrical tape to cover the gun’s muzzle. It helps to keep rain, snow, and such out of the barrel for safety reasons. Should you forget to remove the tape before firing, it won’t hurt anything at all. With the addition of a simple carrying sling, fashioned from an old piece of heavy 1-inch wide webbing, I decided the rifle was ready to go to work.

So, I loosely bound together one sturdy forked stick and one equally stout straight stick to provide myself with the nice, easily adjusted three- legged sort of tripod shown in the photo.

It was only a few days later that the elderly Mrs. Schmidt called informing me that starving “dropped-off dogs” were not only decimating her small flock of prized sheep, but had killed and actually eaten her feisty little terrier. Well, that same evening my “new” coyote rifle proved itself up to the tasks I’d meant it for, with that lighted reticule really showing up in that December’s rapidly fading daylight.