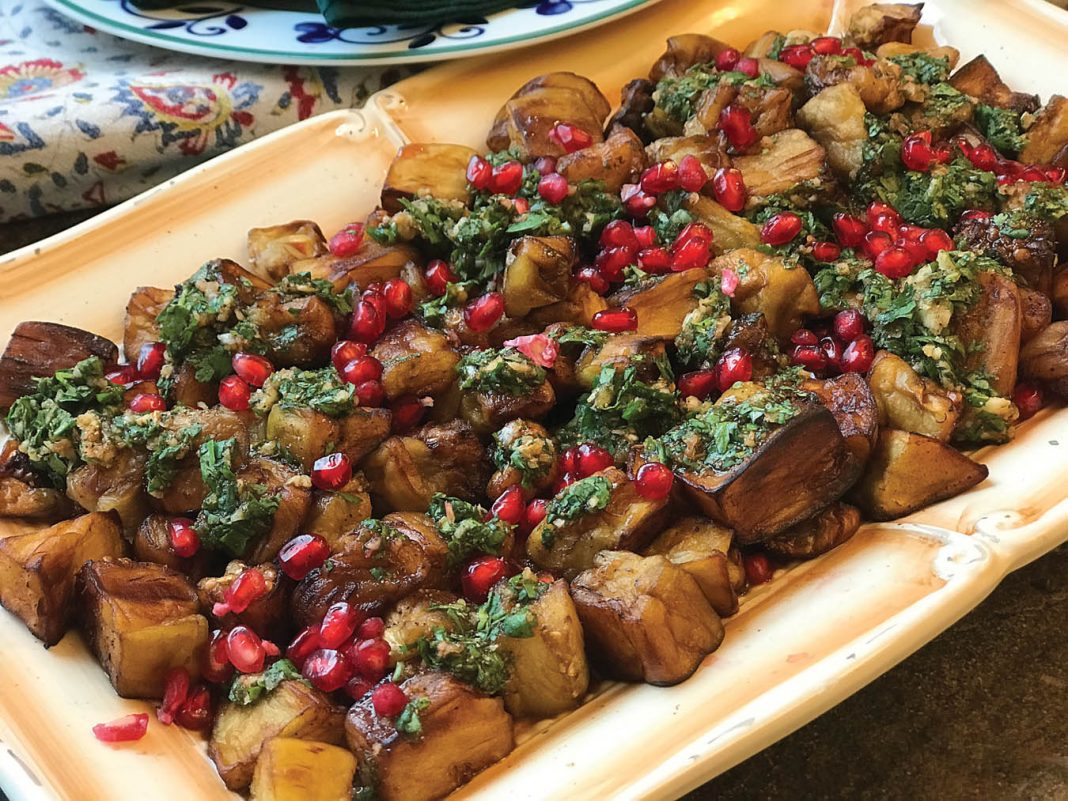 Wonderful to look at, appetizing in flavor, delicious in taste and with a juice which is refreshing on a hot summer day, is a fair description of the pomegranate.

Although according to the Bible, what brought about the “fall of man” was when Eve gave Adam the “forbidden fruit,” more commonly defined as an apple. However, according to other theological and literary interpretations, it was really a pomegranate. In later centuries Solomon sang of an “orchard of pomegranates,” and they are mentioned three times in the Qur’an. A painting representing pomegranates carved on a stone dating from the first millennium B.C. was found at Tel Amareneh in Syria. In their mythology, the Greeks believed that the liquid of the pomegranate sprang from the blood of Dionysus, the god of wine and revelry, and thereafter became the drink of the gods.

From the Middle East it spread eastward to China and westward to the lands bordering on the Mediterranean. In the countryside surrounding Carthage the fruit became so prevalent that the Romans who fell under its spell called it the “Carthaginian Apple.” When the Arabs in the 8th century came to Europe, they introduced the plant into the Iberian Peninsula where, in the ensuing centuries, it was cultivated extensively. Ibn al-Awwan, an Arab agriculturalist in Moorish Spain, listed a dozen varieties thriving in all parts of Andalusia. A leftover from that age is the Portuguese name for pomegranate, roma from the Arabic rumman.

The Spanish conquistadors brought the plant with them to the New World. However, it only thrived in the hot semi-arid parts of South America, Mexico and California. In subsequent years other adventurers and explorers dispersed it throughout the subtropical world, even as far away as Australia.

On the other hand, the cold climate of the northern parts of North America and Europe is not conducive to the cultivation of the pomegranate tree for its fruit. In these lands it was grown solely for ornamental purposes. The bushy un-pruned trees with their brilliant small clusters of orange-red flowers make them extremely attractive as a hedge.

Among the ancient civilizations of the Middle East, the pomegranate was a symbol of fertility. The Romans believed its ovules to be an aphrodisiac — a belief that in later centuries spread to all parts of Europe. Hence, many labelled it the “love fruit.” In Arabic folklore and poetry the pomegranate blossom is often compared to the beautiful lips and cheeks of ladies and the fruit to the female breast. For centuries, many people in the eastern lands believed that the juice of this historic fruit purged a person of envy and hatred.

Pomegranate trees can be propagated from seed or cuttings and grow to a height of 10 to 20 feet. They take about seven years to fully mature and, if properly nurtured, continue to bear fruit for 30 years.

Pomegranates are bright colored and range in hue from pinkish to purple-red. When newly picked they have a fresh appearance and defuse a fragrant odor. The choicest are a bright reddish color with a thin leathery skin. Inside, they are filled with a myriad of large red seeds that appear like masses of scarlet berries embedded in a translucent slightly pinkish pulp.

An excellent autumn-winter fruit, pomegranates are picked before they are fully mature. However, they continue to ripen in cold storage where they will keep in excellent condition for as long as six months.

Pomegranates are low in calories and the juice has no fatty acids. They contain vitamins B and C, carbohydrates, iron, and protein.

Pomegranate seeds covered in a translucent gel can be eaten raw, used as a garnish or as an ingredient in foods. From the gel is obtained a sweet tangy crimson liquid that is, at times, scented with rose or orange blossom water to make a tasty and refreshing drink. The juice can be easily removed from the ovules by placing a cupful in a piece of muslin cloth and squeezing out the fluid. Rich in pectin, it is used in the preparation of many food gels.

In Europe and North America, grenadine syrup is made from the liquid, then usually mixed with artificial flavors and serves as a base for drinks. In the Middle Eastern countries where the fruit is much loved, a similar syrup called dibs rumman or pomegranate molasses prepared by boiling the juice until it becomes thick and turns brownish, is a popular much-used ingredient in cooking.

This condensed juice is used to make drinks or to give soups and sauces a pleasing and somewhat tart taste. In many cases, it can even replace lemon juice. The taste of fried eggs and ground meat is enhanced with a little of this molasses which can be found in Middle Eastern food outlets all across western Europe and North America.

Everywhere the pomegranate is found, the seeds are used to garnish salads and a number of desserts. Besides giving a bright adornment to these foods, they also add a pleasant sweet-sour flavor. In the Middle Eastern lands the fresh seeds are also used in stuffing for both vegetables and meats, while in India they are dried and used in all types of cooking.

North Americans, to a great extent, have not yet learned to appreciate the joys of this elegant product of nature. Perhaps, the difficulty of getting at the ovules helps in retarding the spread of pomegranate consumption. Yet, the extraction of the seeds, even if to the uninitiated is at times messy, is simple to the ones familiar with this marvellous fruit.

To remove the seeds, the pomegranate is pressed and rolled by hand on a hard surface then the stem with the surrounding pulp is removed. The outer skin is then slightly scored with a sharp knife from top to bottom at one-inch intervals. After this, the fruit can be easily broken in pieces with the fingers and the ovules removed.

With these seeds and the fruit’s juice a new culinary world is waiting. The few dishes I have included are only a tantalizing sample of countless others.

Quantity for one large salad

I enjoy this dressing tossed in a mixture of greens for my salads.

Thoroughly combine all the ingredients, then stir into a salad. Sprinkle with pomegranate seeds if desired.

In a frying pan, add oil to 1-inch depth, heat over medium-high then fry eggplant until golden, adding more oil if necessary. Remove and drain on paper towels. Place evenly on a serving platter.

Prepare a sauce by combining remaining ingredients except the pomegranate seeds, then spoon sauce evenly over eggplant. 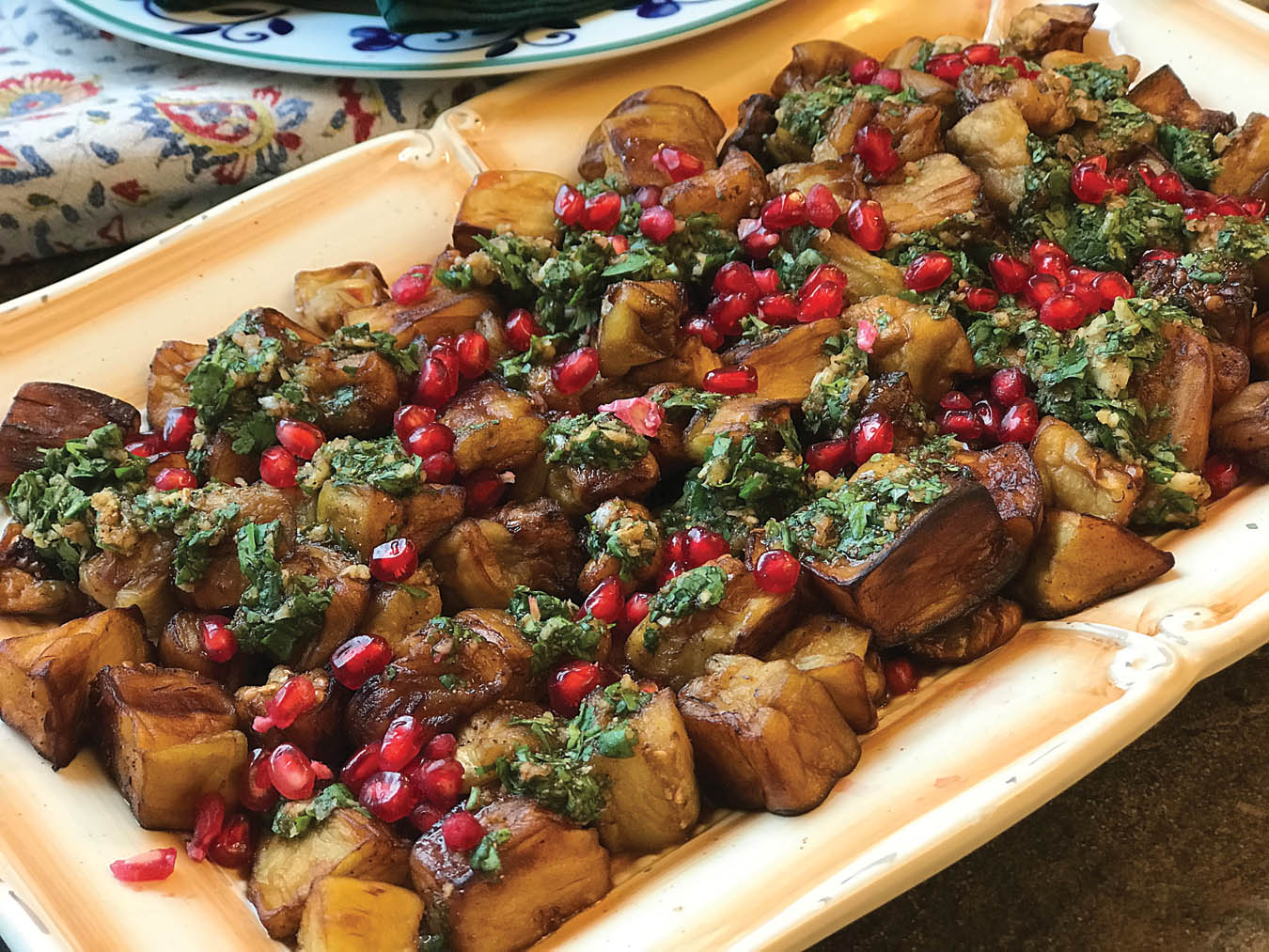 A crunchy vegetarian mix with that extra special taste of pomegranate molasses. This molasses is made from pomegranate juice rendered down into a syrup. It is this molasses that adds the extra touch to many vegetables and even meats.

I recommend scooping up the mixture with a good crusty bun.

To make the sauce, in a bowl whisk together the garlic, olive oil, salt, pepper, lemon juice, and pomegranate molasses. Cover with plastic and refrigerate until ready to use.

In a large bowl, add the eggplant, cauliflower, parsley, green onion, and coriander leaves and toss together well. Add the dressing then thoroughly mix. Gently stir in cheese and pomegranate seeds.

Transfer to a serving plate then serve immediately. 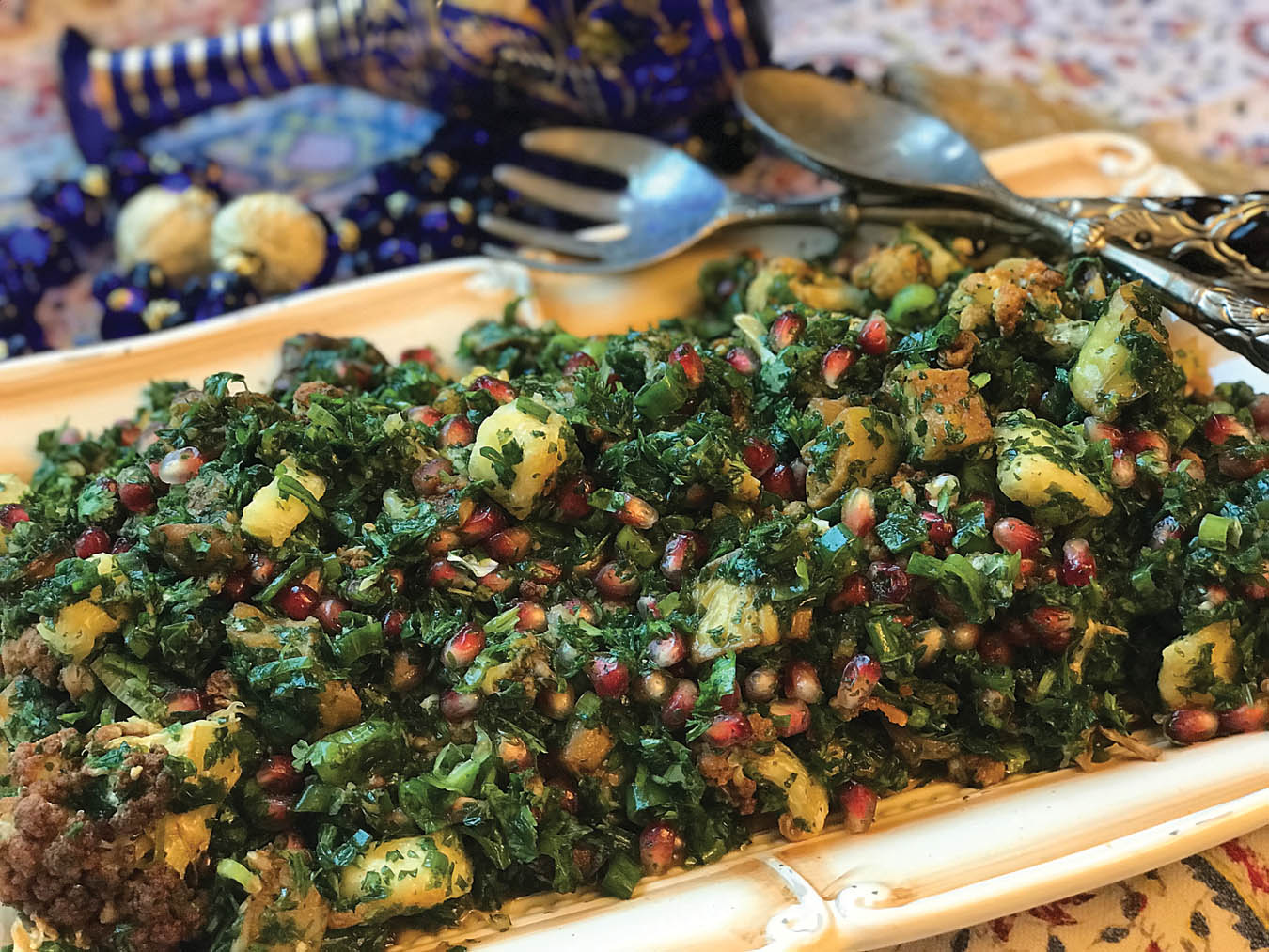 A traditional Syrian soup enjoyed all over the country.

Heat oil in a saucepan over medium, then sauté meatballs, gently turning them over until they begin to brown. Stir in coriander leaves and garlic, then sauté for a further few moments. Add remaining ingredients then bring to boil. Cover then cook over medium heat for about 40 minutes or until the lentils and meatballs are well cooked. Serve immediately sprinkling pomegranate seeds over each serving.

Chicken is one of the best meats paired with pomegranate molasses giving it a bit of tang and sweetness. Served over couscous, the combination is remarkable.

Just before frying the chicken, cook couscous according to package directions, stir making sure that there are no lumps then set aside and let cool for 10 minutes.

In a bowl, mix together the couscous, cranberries, pine nuts, olive oil, parsley, mint, and remaining olive oil, pomegranate molasses, salt, and black pepper. Spread evenly on a serving platter and set aside.

Heat vegetable oil in a large frying pan over medium. Remove chicken from marinade and fry until golden brown, about 5 minutes on each side. 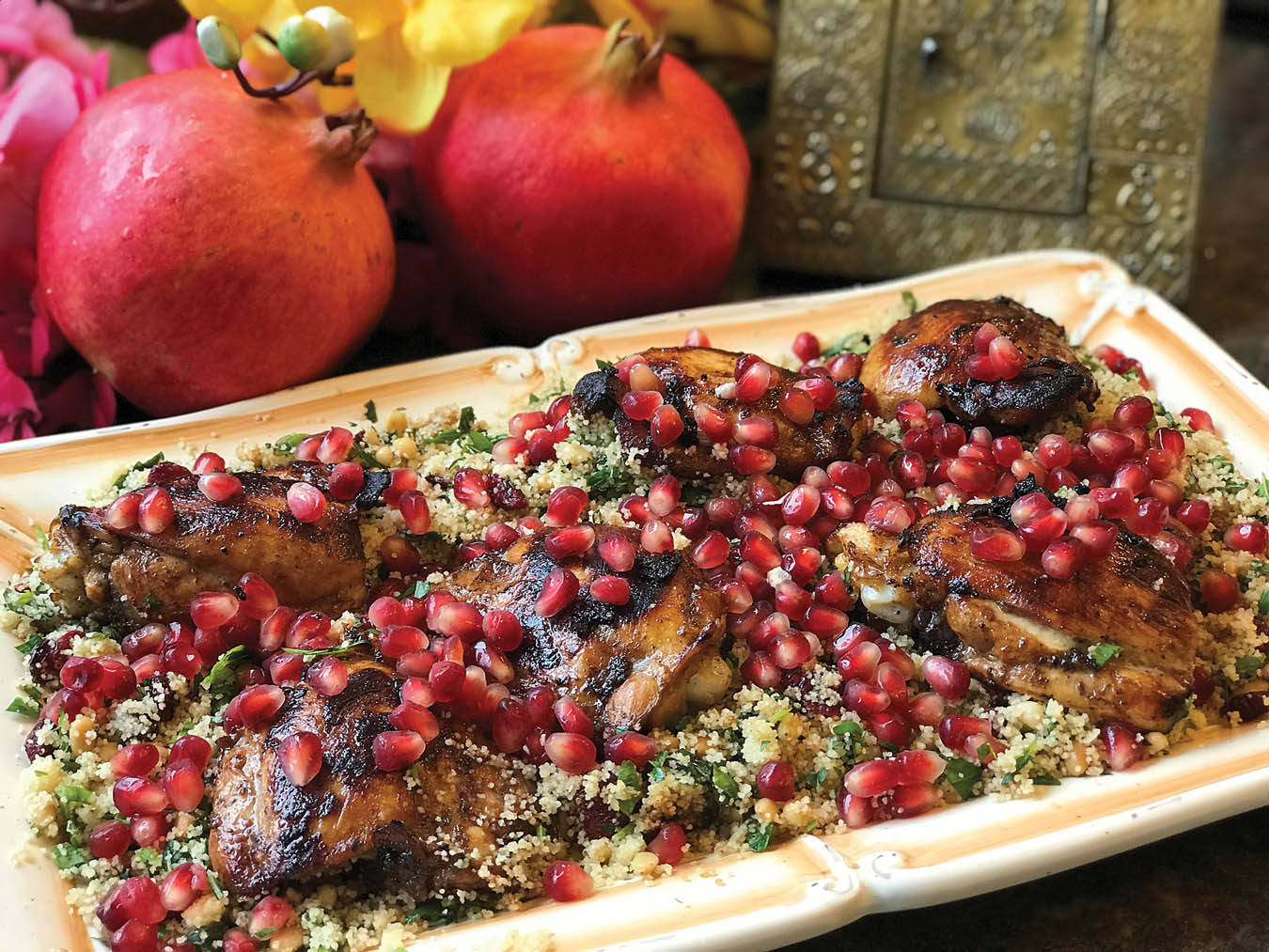 Prepare a basting sauce by thoroughly mixing the olive oil, cumin, paprika, black pepper, cayenne, coriander leaves, and 1 teaspoon of the salt, then set aside.

Prepare stuffing by melting butter over medium heat then stir in onion and sauté for five minutes. Add garlic and pine nuts or almonds, then sauté further until onions begin to brown. Remove from heat, then stir in remaining salt, pomegranate seeds, thyme, sage, rosemary, water, and croutons, then thoroughly mix and set aside.

Rub inside of chicken, including the neck opening with about a third of the basting sauce, then stuff both the inside and the neck opening then sew closed. Baste with one-third of the sauce all around on the outside. Bake in a 350° F preheated oven until the chicken is well cooked, basting every 20 minutes with the remaining sauce.

Remove from oven and let sit for five minutes then serve immediately. 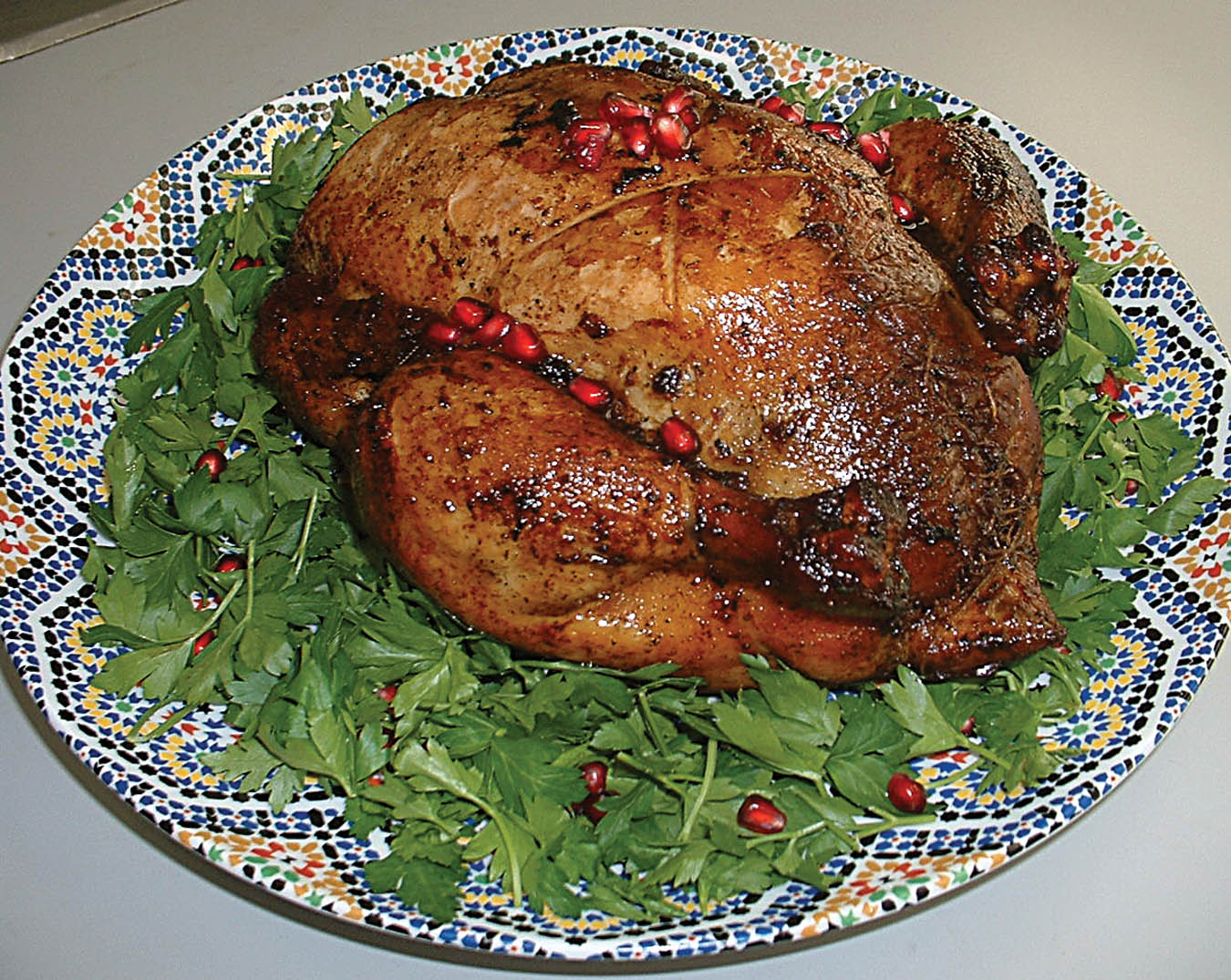 Form dough into 18 balls, then cover with a damp cloth and allow to rest for two hours.

In the meantime, make a filling by thoroughly combining the remaining ingredients, then divide filling into 18 parts and set aside.

Roll dough balls into circles about five inches in diameter, then fold and pinch edges to make a raised rim. Spread one part of the filling inside the rim and pat down evenly with fingers, then continue until all the balls are finished.

Place on a well greased cookie tray, then bake in a 350° F preheated oven for 20 minutes or until the rims of the circles turn light brown. Remove, then serve hot.

Thoroughly combine all ingredients until the honey coats all pomegranate seeds and almonds, then place in a serving bowl.

Chill for one hour then serve. 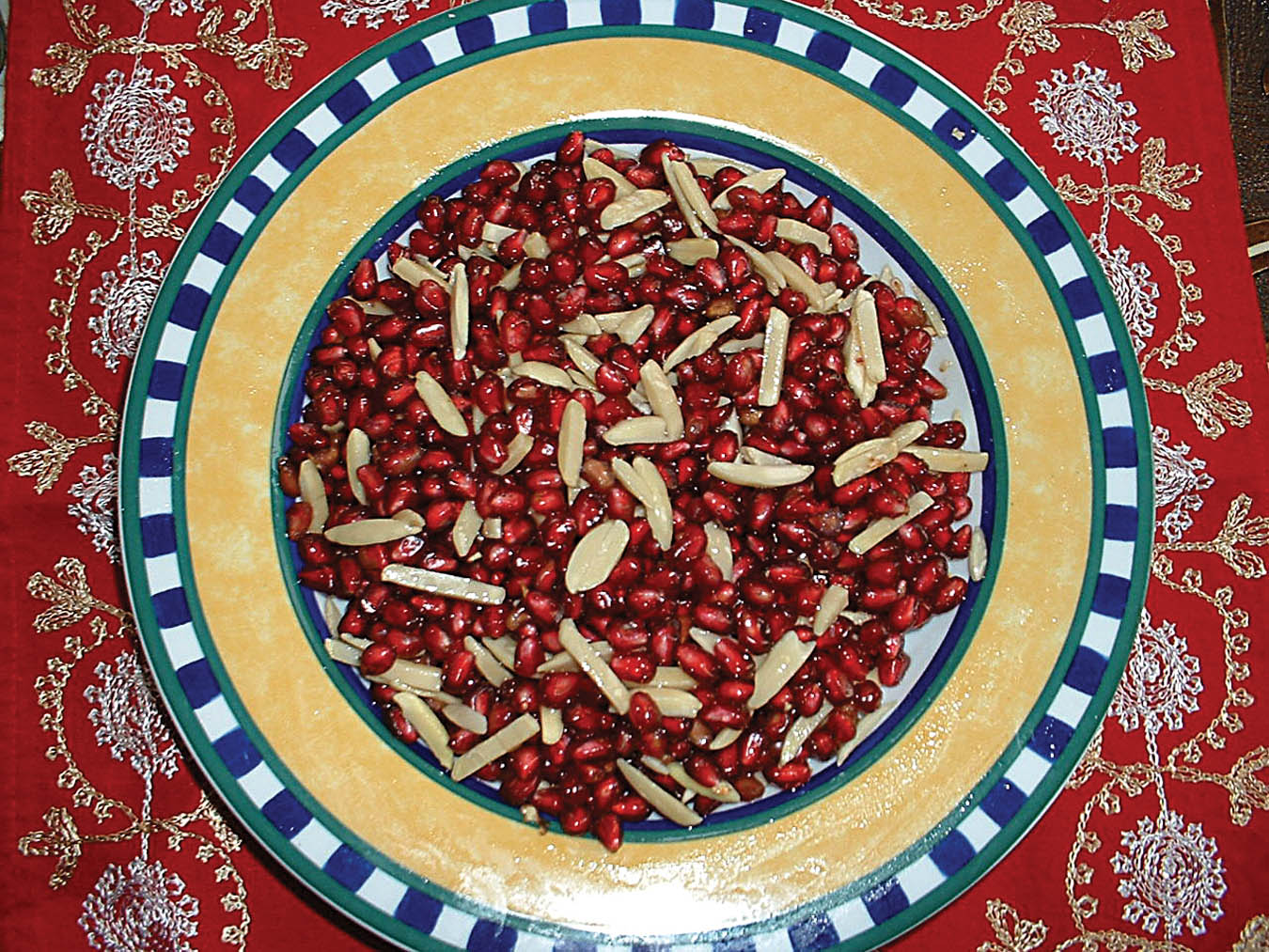 Place rice, raisins, and water in a saucepan then bring to boil. Turn heat to low, then cover and simmer for 25 minutes or until the rice is cooked, stirring occasionally and adding a little more water if necessary. Transfer to a serving bowl then stir in remaining ingredients, except cinnamon. Refrigerate for one hour, then, just before serving, sprinkle with cinnamon.

Easy to prepare, light, creamy, and delicious. The sweet-sour taste of the pomegranate seeds along with the crunch of the toasted pine nuts and sweetened cherries makes for an absolutely delicious dessert.

In a saucepan, add the water then stir in the gelatin. Let sit for five minutes, stirring occasionally. Stir in the cream, sugar, rose water, and salt. Over medium heat and constantly stirring, cook until sugar dissolves, about five minutes. Remove from heat then stir in the buttermilk. Pour saucepan content into a deep 1½-quart casserole. Cover with plastic and refrigerate for four hours.

When ready to serve, sprinkle over top the remaining ingredients. 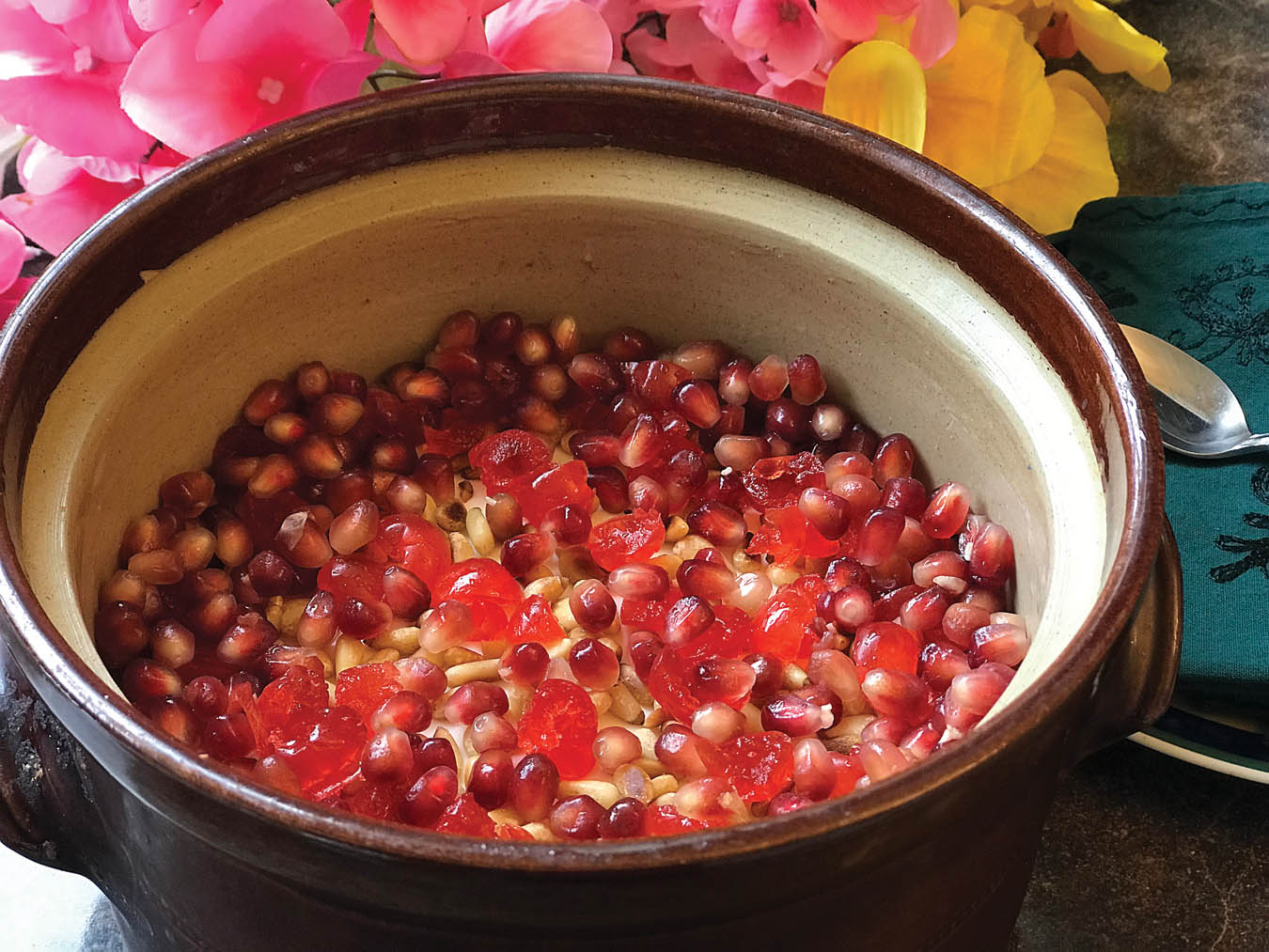