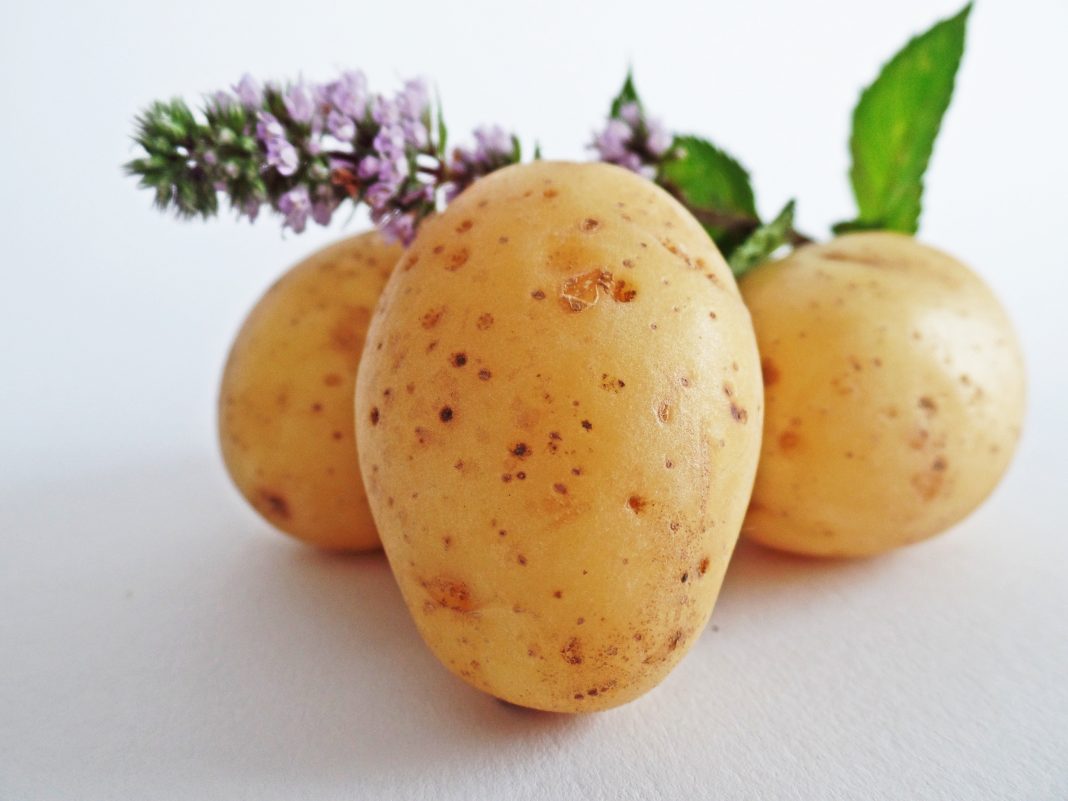 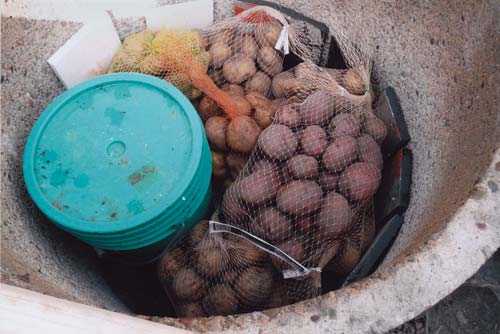 Carrots go in sand in the green pail and potatoes can be sorted by type into plastic mesh bags.

We had talked of putting in a regular root cellar, but digging one by hand on our property would have been a daunting task. Just below the meager layer of topsoil which grew wonderful vegetables was a gigantic layer of solid concrete-like clay. So we got by with storing potatoes with the canned goods in the basement where the temperature hovered in the 50s. Unfortunately, sprouts were plentiful by spring.

But one day a few years back, we decided we had had enough of a 15-foot chokecherry bush that was sending suckers into the garden several yards away, so my husband cut it down then dug the roots out  a task that required the pickax, saw, and shovel. The resulting hole looked like it wouldn’t take much to make it big enough to sink the 2 foot by 30 inch (inside diameter) concrete riser we had on hand. “Then,” I said, “we could store potatoes in it.”

We took turns with the pick and carved out a round hole. Handling the heavy riser was a challenge in itself, as it would have to drop straight into the hole. On the bottom of the hole we put some small rocks and a little sand for drainage. On the bottom of the riser we put hardware cloth to keep the moles and other varmints from accessing the potatoes from the bottom. We folded the wire over the edge of the riser and sewed the folds with fine florist’s wire so it would stay bent over the edges of the riser. Then we turned it over and slid it into the hole.

My husband made a frame of 2x4s that created a square around the top. The first 2x4s, cut to a length that would create a square outside the riser, were set on edge, making a square that touched the concrete on each side, the top of the wood level with the top of the concrete. These were screwed together and set in place. The second set of 2x4s were laid flat and screwed to the first. The top rested on the concrete and the corners crossed over the lower joint, making a sturdy corner. He added an extra 2×4 on the hinge side to make it sturdier. Inside this frame went a 1-inch piece of insulation board (what we happened to have) with the edges taped. He put in an eyebolt with a chain on it so we could lift the snug-fitting insulation.

He fashioned a lid from materials we had on hand. He used a piece of plywood covered with roofing material outside and tar paper inside and hinged it to the frame. Then he attached a handle and a wire that attached to the frame to hold the lid open when I want to get into the hole.

I added strips of Styrofoam insulation-type material around the inside at intervals so that the concrete doesn’t touch the potatoes.

I throw a bag of straw on top of the vegetables to insulate them. I made the bag out of a few yards of fabric sewn into a “pillow case” and tied off so the straw wouldn’t fall out and fill the hole. It lasted a couple of years before it rotted. I empty the straw out in the late spring and use it on the garden, air out the bag, and fill it with new straw in the fall. We also put a couple of flattened bags of leaves on top for extra insulation.

Last winter I stored carrots in a five-gallon pail of sand and potatoes in plastic net bags and they all kept well. I prefer bags that hold about 10 pounds and are easy to grab in cold weather. I try to wait until cold weather to put anything in the potato hole.

Our ground doesn’t freeze below a foot at most, so the potatoes stayed cold, but they didn’t freeze. This might not work in places where the ground freezes much deeper.

Our potato hole isn’t located where we might have chosen, but we sure enjoy having our own potatoes to eat all winter and into the spring.